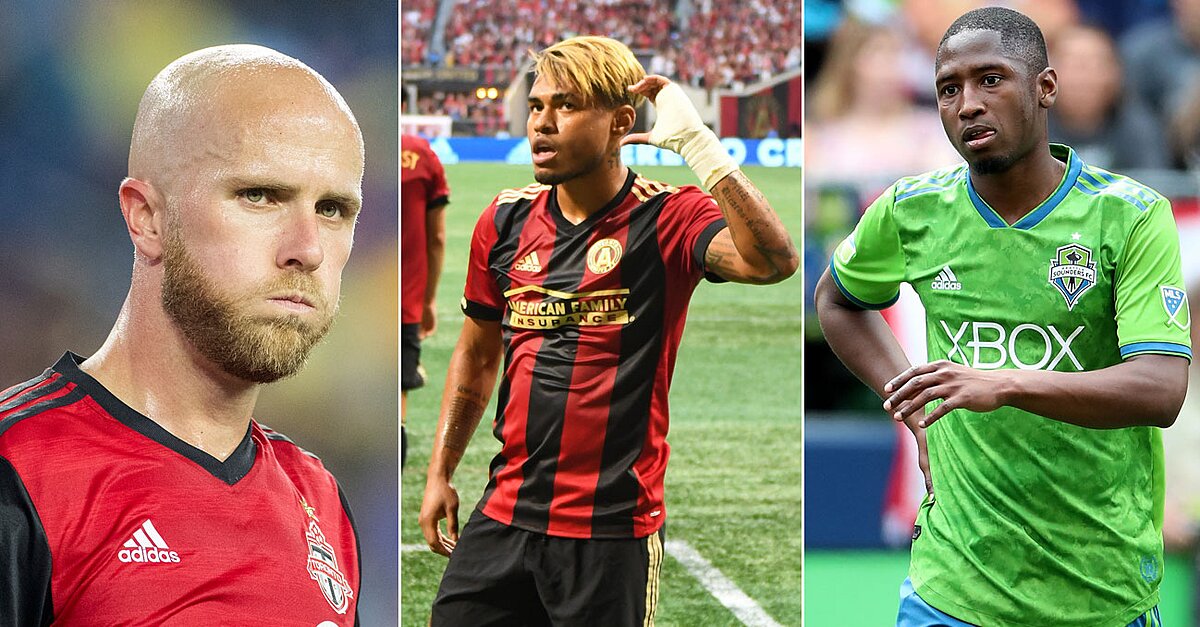 MLS’s recent royalty has fallen on some hard times.

Toronto FC and the Seattle Sounders look nothing like the two-time reigning Eastern and Western Conference champions that they are. In their defense is the calendar, and it’s true that many a postseason run has little to do with the happenings from March to June, but the warning signs and red flags are glaring.

Championship-caliber and veteran-laden teams don’t blow three-goal leads, yet that’s precisely what Toronto FC did in Columbus on Saturday night. Title-worthy sides don’t average less than two-thirds of a goal per game, yet here Seattle is, and it hasn’t been pretty to watch.

In their stead, a new crop of elite teams has risen. Atlanta United and NYCFC were pegged as Toronto’s top threats in the East, and they’ve continued to look the part after each racked up another win. Out West, Sporting Kansas City and FC Dallas have begun to separate themselves from the pack, getting contributions from all over. At this rate, if Toronto or Seattle is to go on another title run, it’s going to have to be done the hard way–without a first-round bye–and after a serious changing of its ways.

Given the above, and before U.S. Open Cup matches and the final games before the World Cup break take center stage, it’s only fitting that we start this week’s look back at the talking points in MLS with TFC’s collapse and Seattle’s inability to even put itself in position to fall that flat:

Toronto FC, what happened to you?

The reigning MLS Cup champions haven’t quite found their top gear after a heartbreaking loss in the Concacaf Champions League final, and between that lingering hangover and an injury to Jozy Altidore, Greg Vanney’s side just hasn’t had it nearly as easy as 2017. It’s gone 2-4-2 since that April 17 defeat in penalties to Chivas, but it could–and should–easily be 3-4-1. TFC was coasting Saturday, racing out to a 3-0 lead over the Columbus Crew. Sebastian Giovinco was making free kicks look like sitters again, and all was well.

Well, until a soul-sucking collapse, that is. TFC conceded three goals in the final 23 minutes, the final one a 90th-minute penalty converted by Gonzalo Higuain, to settle for a road point that is of little consolation. Michael Bradley, in particular, didn’t cover himself in glory, with giveaways leading to Columbus goals and his foul of Gyasi Zardes gifting Higuain the equalizer.

TFC doesn’t have to do any serious table watching just yet, as there’s plenty of season to be played, but if anyone was expecting the switch to flip once CCL play concluded, well, it simply hasn’t happened. Something’s off, and it’s on Greg Vanney and his staff to correct it before things get out of hand.

At least Toronto’s in position to blow leads. Seattle can’t come close to finding the back of the net to begin with. The Sounders have been ravaged by injury, no doubt, but seven goals in 11 games? SEVEN GOALS IN 11 GAMES?! They’ve been shut out eight times–including three in a row–and are not showing nearly enough signs of life to not be worried. If there’s a silver lining, it’s that the club won’t lose Nicolas Lodeiro for the World Cup, but the Uruguayan playmaker also hasn’t played since April 29 due to a foot injury, and it’s not quite clear when he’ll return.

General manager and president of soccer Garth Lagerwey claimed weeks ago that the club would be investing eight figures on a Designated Player signing this summer. That signing’s top attribute had better be goal-scoring, because the Sounders simply can’t sustain with this level of attacking impotence.

With five hat tricks in his MLS career, Josef Martinez is now tied for the league’s all-time mark for three-goal games. The only difference being that Martinez accomplished the feat in 34 regular-season matches–or, you know, the length of one full regular season–while Stern John (55) and Diego Serna (124) took considerably longer to get there. So once every seven or so games, Martinez is hitting for a hat trick. That’s an insane scoring rate.

And now, for the caveat that comes with Martinez’s big day. Two of his three goals came from the penalty spot (hey, they all count the same, right?), and they all came after the Philadelphia Union were reduced to nine men following one truly odd incident.

Auston Trusty was whistled for a questionable penalty, and Haris Medunjanin and Alejandro Bedoya were both sent off for dissent–as Martinez was lining up to take his first PK. It’s one of the more bizarre referee interactions you’ll ever see, and the outcome completely handicapped the Union’s chances of getting anything out of the match.

Credit to Martinez, but he definitely took full advantage of the situation.

V. LA draws at Portland–with Zlatan on the bench

To his credit, it did Saturday afternoon in Portland, where the Galaxy halted the Timbers’ six-game winning streak to the tune of a 1-1 draw. Ibra came on in the 72nd minute, but the fact that he was benched was made even more jarring given that Ola Kamara was on international duty with Norway. Instead, it was Chris Pontius who got the start, and Pontius delivered with a quality goal, that had Ibrahimovic scored it, it’d be RIP Twitter.

If Ibra remains on the bench vs. Real Salt Lake this coming Saturday, we’ll officially have ourselves a situation.

VI. Real Salt Lake’s week summed up in one reaction

RSL hosted Houston and Seattle in a four-day span, walked away with a pair of victories and is now on a three-match winning streak. That’s reason for celebration, like this kid.

In the spirit of the Stanley Cup finals, Seattle pulled the goalie (well, had Stefan Frei way up in the attack with a couple of minutes to spare) in hopes of hitting RSL for an equalizer. Instead … talk about your ultimate backfire.

IX. Montreal breaks through at last

Given how the Montreal Impact have been playing recently, it figured to take something special to break its goal drought. And it did.

Jeisson Vargas’s quickly taken rocket snapped a scoreless streak of 426 minutes and ensured the Impact wouldn’t be blanked for a fifth straight game. Instead, it was the Dynamo that were shut out and sent to a second road loss in four matches. Houston’s woes away from home continue, but Montreal’s scoring woes–at least temporarily–do not.

A week ago, Aleksandar Katai and Alan Gordon scored in sensational fashion, giving the Chicago Fire a 2-1 win over Orlando City. A week later, after a midweek hiccup vs. Philadelphia? The same end result vs. San Jose, if with a little less flash.

If the Fire are going to rely on Katai and Gordon for season-long production, they’re probably in for a rough go of it, but the duo is producing enough now to keep the club in striking distance of the playoff places.

So much has been focused this season on the fortunes of the clubs in Los Angeles, the struggles of Seattle, the calamity in Colorado (seven straight losses!) and Portland’s six-game winning streak. Yet look at the top of the table, and it’s Sporting Kansas City and FC Dallas leading the charge, largely under the radar.

FCD swept both L.A. teams in four days and still has just one loss on the season, a reasonable setback at NYCFC. It’s getting contributions from everyone, evidenced by the fact that on its current three-game winning streak, its six goals have been scored by six players. And in the middle of it all is in-form Mauro Diaz, who has compiled six assists in his last four starts.

Sporting KC continues to find the back of the net at a prolific rate in its own right, with its 28 goals in 14 matches bettered only by Eastern Conference leaders Atlanta United (30) and NYCFC (29). Sunday night’s 4-1 thrashing of Minnesota United was just the latest exhibit, and it was made even more impressive considering that top forwards Johnny Russell and Khiry Shelton were unavailable for the match. Felipe Gutierrez, the club’s top offseason addition, has played 14 minutes since March 31 while he sits out with an injury. The club’s other DP winter signing, Yohan Croziet, went down 18 minutes in Sunday with a hamstring injury. So does SKC complain or wither? No, it has guys like Wan Kuzain Wan Kamal, an 18-year-old Malaysian-American homegrown signing, scoring his first MLS goal.

Both clubs have guys all over the roster stepping up, and as a result they sit at the top of the table. It’s the kind of effort the likes of Seattle need to keep pace heading into the summer.