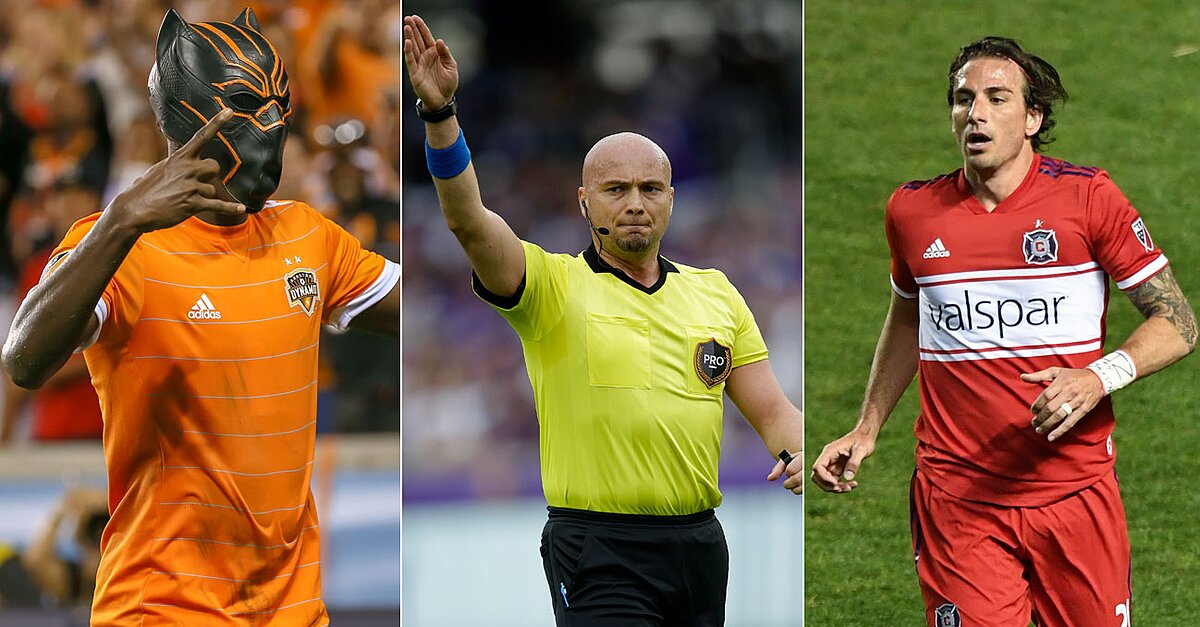 Ever since its implementation in MLS, Video Assistant Referee (VAR) has been a lightning rod for discussion. The pros are obvious–if missed or incorrect calls can be made right, the game is better off with a more fair and deserved result. But when the implementation goes awry, well, the cons can get pretty ugly.

That much was evident yet again over the course of the MLS weekend, particularly in Sporting Kansas City’s 0-0 draw vs. the Columbus Crew in Sunday’s lone match to wrap Week 13.

Despite some phenomenal action on the field and some exquisite goals–including one from the most unlikely of sources–we’ll start our weekly look back at the week in MLS by combing though the three other letters that are quickly defining the season (and look out, because they could have a massive impact on the World Cup, too):

I. The players have seen enough of VAR

And you thought fans and media were the only ones bringing the criticism. VAR, in theory, should make things better. But some of the baffling decisions to either use it or not use it and then the results that follow have done anything but remove controversy and question from matches. And some players are finding it harder and harder to stay silent about it.

The latest instance came Sunday, when Columbus’s Cristian Martinez appeared to slap Seth Sinovic right across the face in an act of clear retaliation. The incident wasn’t much different from Zlatan Ibrahimovic’s slap of Montreal’s Michael Petrasso in the LA Galaxy’s 1-0 win last Monday–for which Ibra was rightfully given his marching orders. Here? Martinez incredibly went unpunished after a lengthy process that yielded nothing but a waste of time, an incomplete use of the technology and an incorrect decision.

Earlier, in another bit of VAR controversy, Federico Higuain was sent off after video review for a tackle on Roger Espinoza, which wasn’t even initially whistled and whose deserved punishment could be debated. Did he get him with his studs? The side of the boot? Does it matter if the referee thinks he can interpret intent?

What we should be talking about is Zack Steffen’s impressive shutout streak, his counterpart Tim Melia’s continued stellar play in goal and two of MLS’s top teams gutting out a hard-earned draw. Instead, well. Not so much.

Some players took to Twitter to voice their not-so-subtle opinions of what they’d seen:

All of this came after Saturday night’s late game, when LAFC’s Laurent Ciman went to ground in his own box after a phantom “foul” on D.C. United’s Darren Mattocks, only to land hand-first on the ball. That’s a clear PK for D.C., right? Well…

The promise and expectations of VAR are not the problem. But the shoddy implementation will continue to call more results into question and disrepute until things are more streamlined, efficient and, most importantly, corrected. Don’t expect the anti-VAR chorus from within MLS locker rooms to quiet until this issue subsides.

Aleksandar Katai doesn’t always score, but when he does, it’s certainly worth another look. Check out his free kick to open the scoring vs. Orlando City:

This pairs nicely with his wondervolley last month vs. the New York Red Bulls.

Yes, that was Alan Gordon–ALAN GORDON!–launching a rocket from long range to hand a suddenly slumping Orlando City its third straight loss. And yes, that was just the second goal of his career from outside the 18.

We did not realize he had that tool in the belt either, Mo Adams!

IV. Thanks for checking in, dad

Tim Parker’s (apparent) dad couldn’t have asked for an update at a better time.

FC Dallas and U.S. goalkeeper Jesse Gonzalez turned 23 on Friday, and he celebrated by stoning Sebastian Giovinco over, and over and over (once a penalty kick!) and shutting out MLS Cup champ Toronto FC in a massive 1-0 win. Not a bad way to celebrate!

The New England Revolution held a 2-0 and 3-2 lead over the Vancouver Whitecaps, yet had to settle for a 3-3 draw thanks to the comeback heroics of Uruguayan, whose hat trick was Vancouver’s first in five years. The Caps can thank one man for the one point.

Real Salt Lake boasts a ton of exciting young prospects, and Sebastian “Bofo” Saucedo is most certainly one of them. He couldn’t have picked a better time, situation and manner in which to score his first MLS goal, helping RSL bounce back from a demoralizing defeat with an impressive win in Seattle.

Saucedo, 21, has shown his penchant for scoring golazos with youth teams for both club and country. It’s great to see that translate to the senior stage.

The Portland Timbers have now won a club-record six matches in a row, and Swedish striker Samuel Armenteros is rounding into form to provide the killer instinct up top the club had been lacking. His two-goal performance in a 3-2 win over the Colorado Rapids was more evidence of that. Just look at this touch to go around defender Danny Wilson, and then the following touch to beat a helpless Tim Howard. My word.

IX. When our powers combine…

Minnesota United has its Batman (Miguel Ibarra) and its Superman (Christian Ramirez), and when the two superheroes are on, it’s a beautiful thing to watch. Well, unless you’re the woeful Montreal Impact.

It’s tough to know what to make of the Houston Dynamo, who have had some eye-opening results on both ends of the spectrum this season, but a comprehensive 3-1 win vs. NYCFC is something to file away on the positive end. Houston conceded first at home, and early, but bounced back thanks to winter signings Alejandro Fuenmayor and Tomas Martinez, before “La Panterita” Alberth Elis finished off NYCFC and busted out his mask routine to celebrate.

The contribution of Martinez, a Young Designated Player signing, is most intriguing. The 23-year-old Argentine has scored and/or assisted on a goal in five of Houston’s last seven matches, which has coincided with the club going 4-1-2 in that time. The club is a batch of MLS potpourri. It’s made up of the old (DaMarcus Beasley), the been-around-the-block league journeymen types (Arturo Alvarez, Eric Alexander, Leonardo, Joe Willis) and some truly dynamic pieces in Elis, Martinez, Romell Quioto and Mauro Manotas. Wilmer Cabrera is making it work, but the test will be seeing if the Dynamo can keep it up away from home. Three of the next four matches come on the road, where the club has famously struggled in recent years. Since moving to the Western Conference in 2015, it’s 6-29-21 away from BBVA Compass Stadium. Woof.

It’s a small, not entirely impressive sample, but two 1-0 wins in a span of five days–albeit against even worse-off teams in Montreal and San Jose–have the LA Galaxy back near the playoff places and the temperature slightly cooler on Sigi Schmid’s hot seat. Perhaps Zlatan’s slap in the back of the head was the spark they needed after all. VAR is good for something, right?