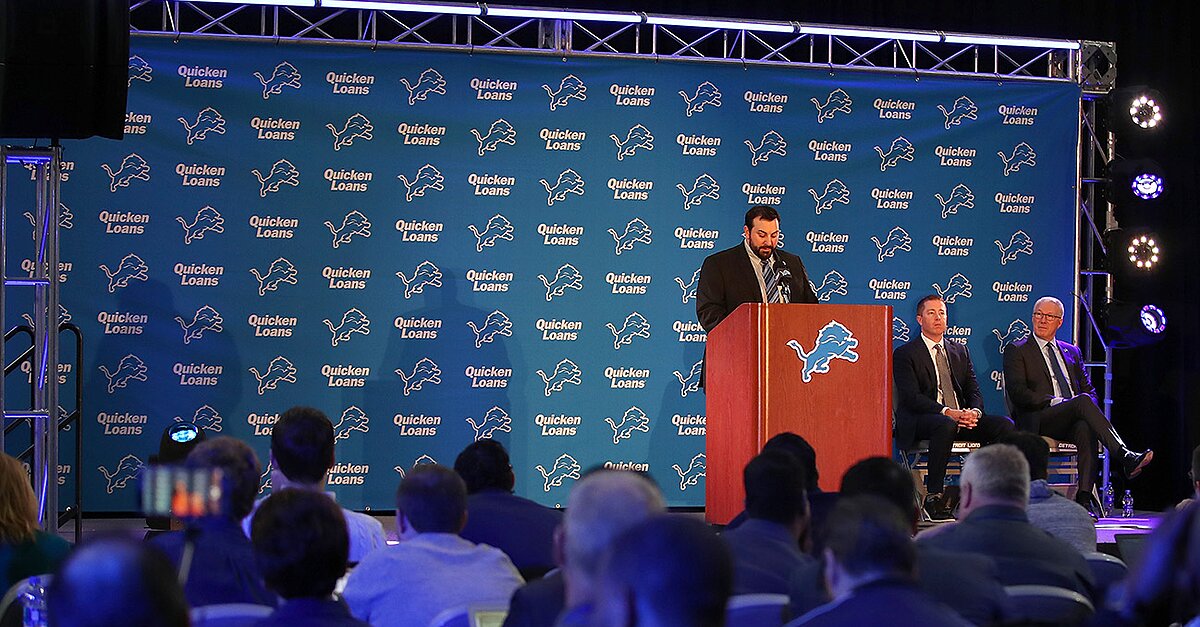 Joe and Gail King heard about it Thursday morning, when a family friend called to ask if they had seen the news. The Detroit News published a story late Wednesday night detailing a sexual assault accusation made against Matt Patricia, the new head coach of the Detroit Lions and perhaps the most famous person to ever come through Rensselaer Polytechnic Institute’s football program, where Joe King was head coach for more than two decades.

“I was amazed,” King said by phone Thursday. “I’m going to be honest with you, I never heard anything about it, which is kind of hard to believe. … This is the first I’ve heard of it. Honest to God.”

The incident in question occurred in the spring of 1996, toward the end of Patricia’s senior year of college. Patricia and a friend, Greg Dietrich, were on a spring-break trip to South Padre Island in Texas. A 21-year-old woman alleged that the two of them broke into her room and sexually assaulted her. In August, 1996, a grand jury indicted Patricia and Dietrich each on one charge of aggravated sexual assault. But the charges were dropped in January 1997 when the accuser did not show up for court. A court document included the hand-written note: “Victim is unable to testify and can not give a date certain when she will be available. Victim does not feel she can face the pressures or stress of a trial. Victim may request that the case be refiled at a later date.”

While this was all playing out, King hired Patricia to be a graduate assistant for the RPI football team in the fall of 1996. At the time, King said, he had no idea that Patricia had been accused of a crime.

“I’m sure we interviewed him, and I’m sure he filled out some paperwork, and I’m sure the school did some kind of a check on him,” King said. “But I don’t recall anything like that.”

After leaving RPI, Patricia rose through the coaching ranks, making stops at Amherst College and Syracuse before landing with the New England Patriots, where he spent 14 years working his way up from offensive assistant to defensive coordinator, winning three Super Bowls along the way. When the Lions hired him as their head coach this offseason, NFL pundits generally lauded the move. Patricia was considered one of the brightest minds and best assistant coaches in the game.

It turns out, Joe King wasn’t the only one kept in the dark. As Patricia interviewed for all those jobs over the years, he said in a press conference on Thursday, the 1996 sexual assault accusation never came up. “It never came up as anything, because it was dismissed, and I was innocent, so it just has never been part of any [job hiring] process that I’ve been involved with before,” Patricia said at a press conference Thursday.

The Lions appear to have had no idea about the incident before the Detroit News published its report on Wednesday. When Robert Snell, the reporter who wrote the story, approached team president Rod Wood, “I don’t know anything about this.” The Patriots also released a statement on Thursday saying that they, too, had not been previously aware of the accusation against Patricia.

• THE LEGAL FALLOUT OF MATT PATRICIA’S SEXUAL ASSAULT INDICTMENT: Could the Lions cut ties with Patricia? Could Patricia be sued or re-charged with a crime? SI’s legal analyst explains what legal action likely took place back in 1996 and what legal action Patricia could potentially face now.

The revelation of the 1996 incident has raised several questions about the Lions’ hiring practices.

1) How could the Lions not be aware of the indictment?

The Lions told the Detroit News that their background check searched only for criminal convictions.

In an e-mail to The MMQB, Snell wrote that he “ran across the indictment while conducting a routine check of public records that are widely and readily available—even after 22 years.”

Deadspin published a story on Thursday titled, “We Found Matt Patricia’s Sexual Assault Indictment In 30 Seconds. Why Didn’t The Detroit Lions?” MMQB staff writer Kalyn Kahler was able to find the indictment via Nexis in a similarly short amount of time.

Besides the Lions, five teams interviewed Patricia for head-coaching vacancies between 2016 and ’18. A source from one of those teams told The MMQB that he was unaware of the 1996 incident because Patricia was never a finalist for their vacancy, but believed his organization would have uncovered the indictment through a background check had they brought Patricia in for a second interview.

As of Thursday morning, Victoria Cisneros, the District Attorney’s Office Spokeswoman, said their office had not received direct communication from any NFL clubs or the league office inquiring about the case, though the New York Times reported that the NFL will conduct a formal investigation.

The Detroit News reported that APG Security, a New Jersey-based private investigations firm, requested copies of the indictment and dismissal from the county prosecutor’s office. (Presumably, APG was working on behalf of an NFL team.)

2) Had the Lions known about the accusation, would they have still hired Patricia?

For a story on the NFL hiring process, reported by The MMQB’s Conor Orr and Jonathan Jones last winter, Jed Hughes, the leader of NFL executive search firm Korn/Ferry, said this:

“I would say from my perspective, that would be my first recommendation to a client. If you have anything [involving domestic violence or sexual assault], you don’t want them.

“When we hire, we use an outside group called the Mintz Group [private investigators] and they go into the court records and all that kind of stuff. There’s another level of due diligence with them in the court and all the public records that we don’t have access to.”

Four years ago, the franchise received criticism for hiring University of Tennessee offensive coordinator Jim Bob Cooter as offensive coordinator. Cooter had been charged with aggravated burglary in 2009 after allegedly climbing through a woman’s bedroom window, stripping down to his underwear and getting in her bed. (A record of that arrest no longer exists.)

3) Did the Lions do a thorough job following-up on the accusation?

In a statement released Wednesday night, the Lions said that they spoke with Patricia and his attorney “at length” about the incident.

What’s unclear is whether the team made any effort to gather facts beyond his side of the story. Did they reach out to law enforcement? The prosecutors’ office? Dietrich? The accuser?

The Lions did not respond to specific questions from The MMQB; a spokesperson said they stand by a statement attributed to owner Martha Firestone Ford, general manager Bob Quinn and Wood, which read in part: “Coach Patricia was the subject of a standard pre-employment background check which did not disclose this issue. We have spoken to Coach Patricia about this at length as well as the attorney who represented him at the time. Based upon everything we have learned, we believe and have accepted Coach Patricia’s explanation and we will continue to support him.”

The MMQB was unable to contact the accuser through phone calls.

4) What did Patricia reveal to the Lions that would cause them to support him so vigorously and so quickly?

In the Detroit News story, Rod Wood responded to Snell “hours” after first learning of the 1996 incident. “I am very comfortable with the process of interviewing and employing Matt,” Wood told Snell. “I will tell you with 1,000-percent certainty that everything I’ve learned confirmed what I already knew about the man and would have no way changed our decision to make him our head coach.”

Wood also told Snell that the victim in the 1996 incident had recanted her allegation multiple times—a claim that, Snell points out, is not substantiated.

In its official statement, the team also made a point to note that, at the time of the incident, “Matt was 21 at the time and on spring break in Texas.”

It’s unclear why the revelation of a sexual assault accusation and dismissal would make the Lions more confident in their decision to hire Patricia. Or why the team included his age and the fact that the alleged incident occurred during spring break, emphasizing what they seem to view as mitigating factors—unnecessary if they are confident in his innocence.

• THE HIRING PROCESS FOR AN NFL HEAD COACH: A look at how teams vet head-coaching hires, and how they present them to the public.

At Patricia’s Thursday press conference, the Detroit media asked him some tough questions—questions the Lions should have asked before hiring him. But Patricia did little to shed light on the 1996 incident, other than to say he was “falsely accused” and proclaim his innocence:

What happened on the night in question?
Patricia: “Again, I think what’s important here, what happened 22 years ago is what didn’t happen. As I said, I was innocent then and I am innocent now. I was falsely accused of something that I did not do.”

There was a grand jury indictment. Can you explain why you were indicted, even though the charges were dropped?
Patricia: “Again, I was accused of something that I did not do. I went through the process and the case was dismissed.”

Were you in the room with the girl and was there consensual sex?
Patricia: “Again, I did nothing wrong. And that’s all I’m going to say on that matter.”

At the time of the press conference, Joe King, Patricia’s college coach, was still trying to wrap his head around the accusation, how something as serious as a sexual assault indictment would not have come across his radar. He remembered Patricia as a grinder, an “exemplary student and citizen,” a backup who worked his way into the starting lineup. Dietrich had been a team captain their senior year.

“I always used to tell the kids, ‘I don’t want to hear it from somebody calling me. If something goes on, tell me. Be a man about it.’ Nothing was ever said,” King said.

“I mean, I coached for 40 years. I never had anything—it’s just never come up, you know? That’s a lot of kids, and … I don’t know. At least back then, you never expected anything like that.”