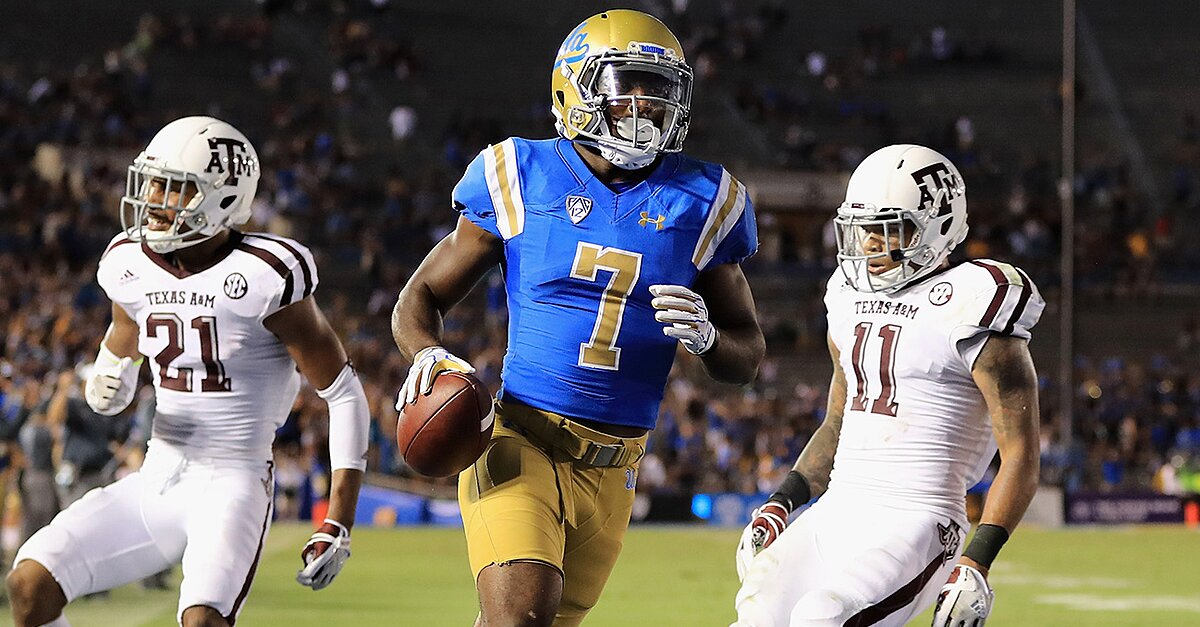 College football trades on its own scarcity, touting the significance of every game over the three-month regular season through the lens of that year’s four-team playoff field. But just because some games didn’t exactly alter the course of the season doesn’t mean they weren’t really, really fun to watch.

With the benefit of several months’ reflection, the four games below didn’t have much influence on the broader story of the season—you won’t find any teams who made the playoff, won their conference or even shook up the top of their division in here—but we couldn’t imagine 2017 without them. Four SI writers each look back at one of the games that supplied enough intrigue to make it ultimately irrelevant whether the teams ended up playing for any meaningful trophies at season’s end.

Both Texas A&M head coach Kevin Sumlin and UCLA head coach Jim Mora Jr. had spent the offseason on most coaching hot seat lists, and losing the primetime season opener was guaranteed to ramp up the pressure. The Aggies held a 38–10 lead at halftime and pushed their advantage to 34 points with a pair of field goals in the third quarter. That’s when UCLA ripped off five unanswered touchdowns to complete the second largest comeback in college football history.

The rally doubled as a Sunday-night showcase for eventual first-round draft pick Josh Rosen, who threw for a career-high 491 yards with four touchdowns to lead the Bruins back. His game-winning score was a masterstroke—a fake spike to set up a 10-yard lob to Jordan Lasley with 43 seconds left that seemed to catch Texas A&M’s defense napping. In the moment, the win felt like a monumental, potentially job-saving triumph for Mora, but it couldn’t prevent the inevitable. Both coaches were eventually fired as the Bruins and Aggies stumbled to forgettable seasons. — Chris Johnson

Jeff Brohm knew his team had listened to him all offseason when he reached halftime of his first game as Purdue’s coach. The Boilermakers led Louisville by four. A team that was so often beaten before it got off the bus had believed Brohm when he said Purdue could be competitive every time it took the field. “They might have been a little too happy,” Brohm cracked this week when I interviewed him on SiriusXM.

Brohm, who had come from Western Kentucky and knew all about the talent on the Bluegrass State’s other rosters, was glad the Boilermakers had set aside a defeatist attitude, but he still needed to work on their closing skills. Because the quarterback on the other sideline had won the Heisman Trophy the previous season for a reason, and Lamar Jackson made any Purdue lead unsafe. Even though the Cardinals trailed at some point in every quarter, Jackson kept bringing them back. He racked up 485 yards of total offense (378 passing, 107 rushing). He put Louisville up for good in the fourth with a drive that included a 39-yard pass to Dez Fitzpatrick on third-and-six and a 20-yard touchdown strike to Fitzpatrick between two defenders. Down seven late, the Boilermakers were marching when Louisville’s Chucky Williams intercepted Elijah Sindelar to end the threat.

This game didn’t mean much in the grand scheme, but it taught us two things:

• Purdue isn’t going to be a doormat under Brohm. — Andy Staples

The team that had 655 yards of total offense, 33 first downs and held the ball for 41 minutes and did not win this Labor Day night thriller at Mercedes-Benz Stadium in Atlanta. Tennessee came back twice from 14-point deficits, landed big swings with a blocked field goal attempt and a late fumble recovery, and snuffed out a two-point conversation when Georgia Tech coach Paul Johnson decided to go for the win in the second extra session. While the national television audience was making fun of the trash can the Volunteers used as a sideline turnover celebration gimmick, that same sideline got the last laugh.

That escape could have boosted Tennessee into sleeper SEC East contention, but the season took a nightmarish turn from there. The Vols fired coach Butch Jones mid-season and botched the search for his successor in a debacle that cost athletic director John Currie his job. — Scooby Axson

Eighty-one FBS teams finished with six wins or more in 2017, but with only 39 bowl games, three teams were passed over for postseason invitations: Western Michigan, Buffalo and UT–San Antonio. The two MAC teams in that group met on Oct. 7, even in the standings at 3–2 and no doubt already aware that every win would be precious in the push for bowl eligibility. Little did they know that they were about to produce one of the season’s wildest games and just the fourth seven-OT game in FBS history—or that its outcome wouldn’t be enough to extend their seasons into mid-December.

Buffalo blocked a 52-yard field goal attempt as time expired to preserve an intriguing 31-all tie heading into overtime, but the game descended into chaos once it was free from the trappings of regulation. The teams combined for 77 points over seven extra periods, capped off by a Jarvion Franklin touchdown run after Buffalo had been forced to settled for a field goal in the first possession of the final session. Would the Bulls have earned a bowl bid if they had found a way to close the Broncos out and wound up 7–5? Would a simple, four-quarter win have taken less out of Western Michigan, which laid an egg the next week at home against Akron and went on to lose four of its last six games? That hindsight was not available at UB Stadium. — Eric Single