Citing a need to make “our schools and our state a safer place,” Texas Gov. Greg Abbott unveiled a slate of policy and legislative changes on Wednesday that range from boosting security at schools to doing more to keep guns out of the hands of people who shouldn’t have them.

Abbott spoke about “school hardening strategies” such as reducing entries and exits at schools — and “active shooter alarm systems” that can be easily distinguished from a fire alarm. That approach, he said, would help students and staff respond appropriately — and avoid sending students into hallways where they might be targeted by an active shooter.

The governor also said state law should be changed to force courts to report a mental health adjudication that someone is “mentally unfit to have a gun” more quickly. The law should tighten that deadline to 48 hours rather than the current 30 days, Abbott said.

Abbott’s plan calls for adding more school marshals — teachers who are licensed to carry firearms and go through training — as well as increasing the number of marshals per campus.

Noting that social media often contains clues of shooters’ intentions before they act, Abbott said he wants to expand a program that has been tested in West Texas, which “uses mental health screenings to identify students at risk of committing violence,” Abbott said. Called the Telemedicine Wellness, Intervention, Triage, and Referral (or TWITR) Project, the approach has been led by Texas Tech University. 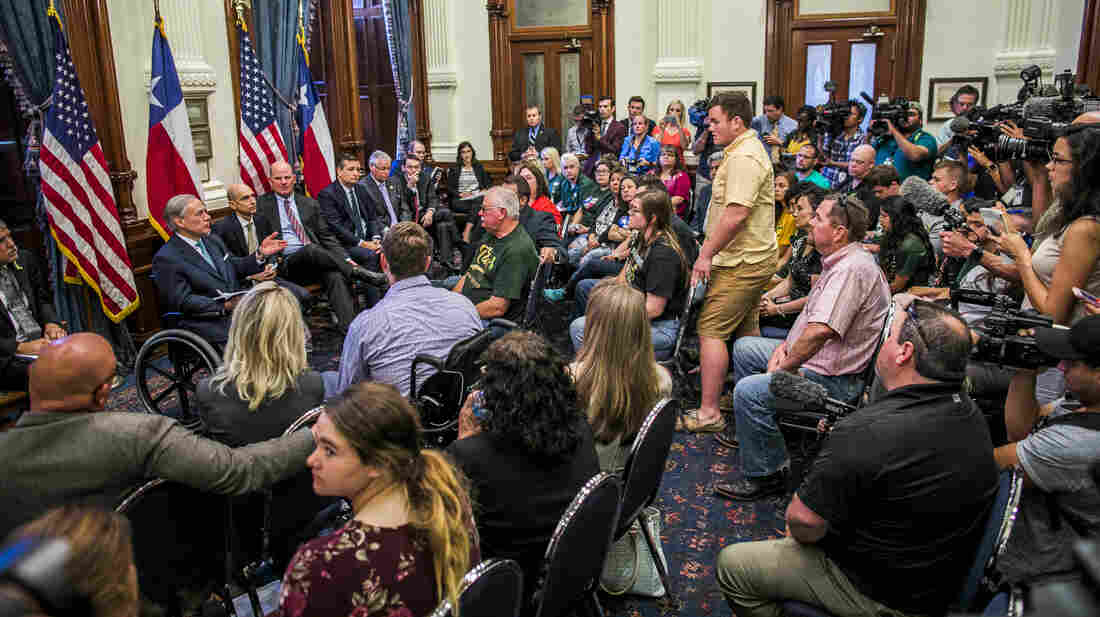 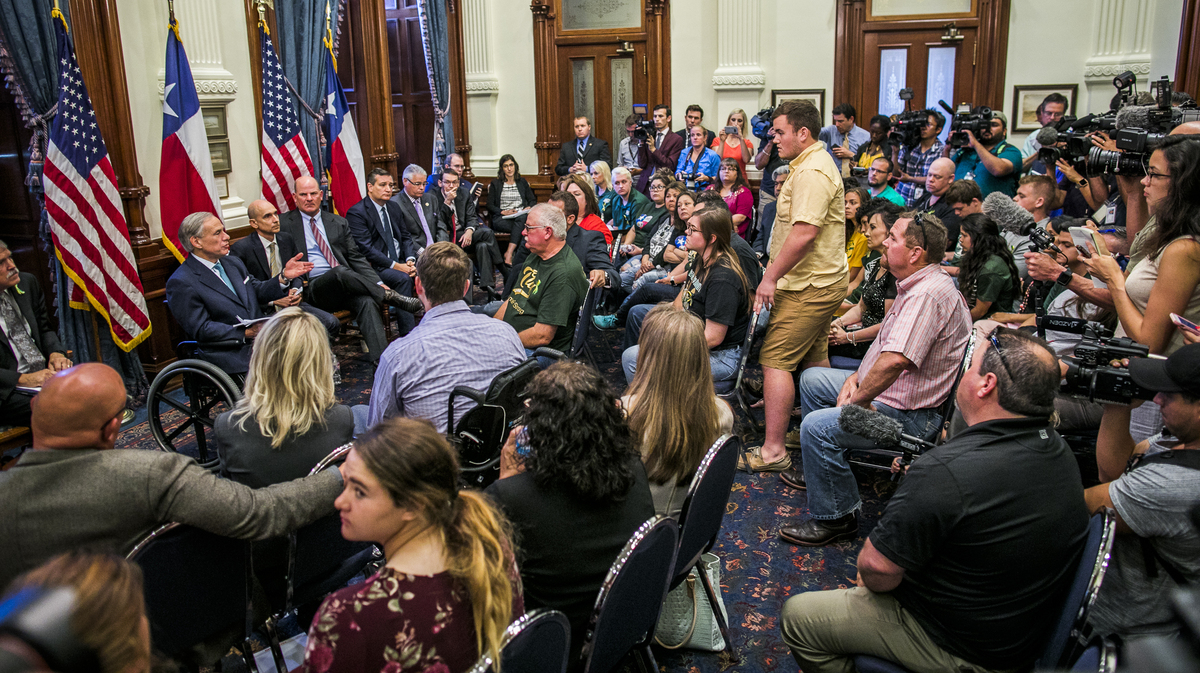 Texas Gov. Greg Abbott is laying out his plan to make schools safer on Wednesday. Here, Abbott hosts a recent roundtable discussion with victims, family, and friends affected by the Santa Fe, Texas, school shooting that killed at least 10 people earlier this month. People with ties to other recent mass shootings were also invited.

Another initiative seeks to enhance the presence of local police at schools, something Abbott said could be accomplished by adding schools to their regular patrols and “allowing officers to use campus facilities for routine breaks, or for them to have a room located at that school, where than can fill out their reports.”

Abbott said he also wants to change Texas law to promote responsible gun ownership – and to give officials more authority to seize guns.

The governor said he will ask the state legislature to consider a law “that would allow law enforcement, a family member, a school employee or a district attorney to file a petition in court seeking the removal of firearms from a person proven to be dangerous to himself or to others.”

Another proposal calls for requiring gun owners to report when their weapons are lost or stolen.

Abbott said the new ideas are part of the Governor’s School and Firearm Safety Plan – a list of 40 recommendations for making communities safer. He detailed his new school-safety plan in an event held at the Dallas Independent School District’s administration building Wednesday morning.

When asked if any elements of his proposal would be mandatory, Abbott said, “A lot of these are things the state will be doing,” citing work on social media assessment programs. He added that “there is no resistance” from schools over adding safety measures.

As for paying for the changes, he said his plan includes more than $100 million in grants, matching funds, and other money.

Abbott spoke one day after he visited Santa Fe High School on its first day of classes since the May 18 shooting that killed 10 people.

“We want action to prevent another shooting” like Santa Fe, Abbott said.

To improve the ability to alert schools and officials to potential risks, Abbott said the state will expand crime stopper programs and make it easier for students to report possible threats — something he said could be helped by a new app called iWatchTX, which the governor said will be activated next month.

Leading up to today’s announcement, Abbott hosted three days of roundtable talks in Austin, meeting with survivors, friends and loved ones from recent shootings. He said he had met with more than 100 victims and their relatives, and that he had been “proud and inspired” by the students at Santa Fe.

A key demand he heard at the meetings, Abbott said, was “for greater law enforcement presence at schools.”

Since Abbott was sworn in as governor in 2015, Texas has suffered two horrible shootings — this month at Santa Fe High and, last November, at the Sutherland Springs Baptist Church, where 26 people were killed in the small town east of San Antonio.

And in 2016, a gunman shot and killed five police officers during a protest against police shootings of black men.

When he visited Santa Fe High after the shooting, Abbott said,”It’s impossible to describe the magnitude of the evil of someone who would attack innocent children in a school, a place of learning where parents should be able to send their children without fear for their child’s safety.”

As leaders often do after such an event, the governor asked for “prayers and support” for loved ones affected by the shooting. He also said, “We need to do more than just pray for the victims and their families. It’s in Texas that we take action, to step up and make sure this tragedy is never repeated.”