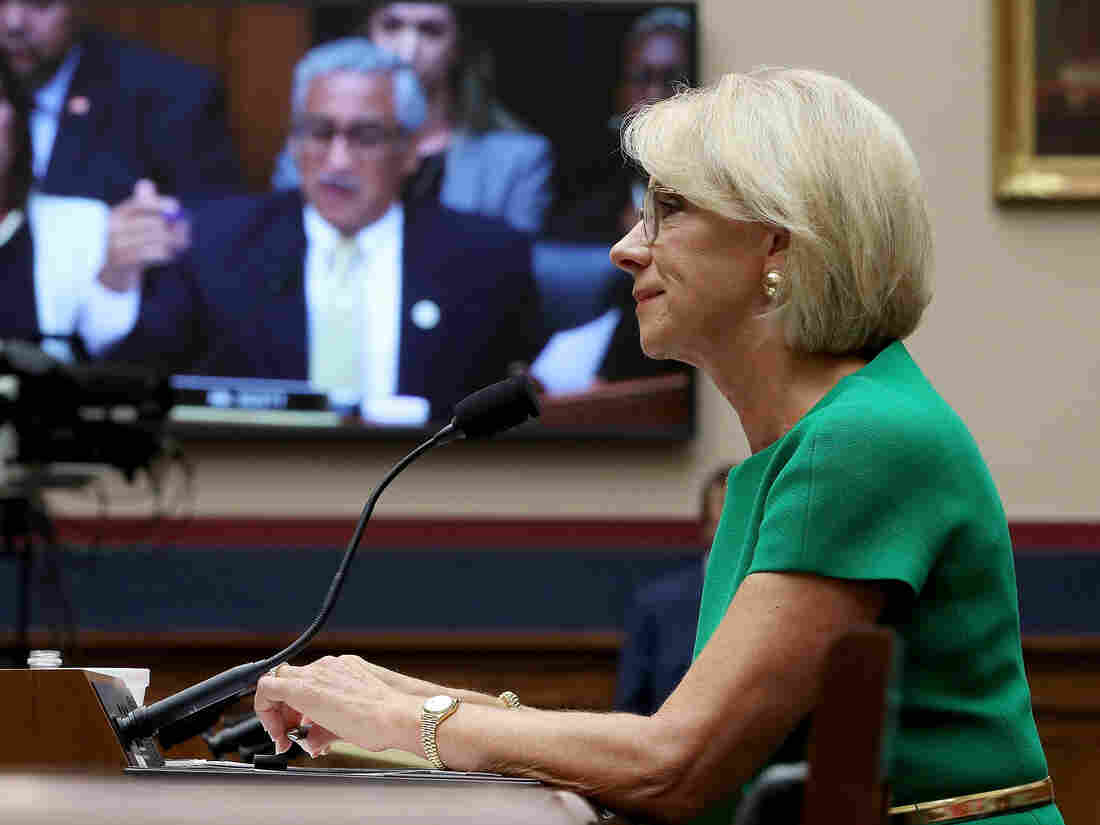 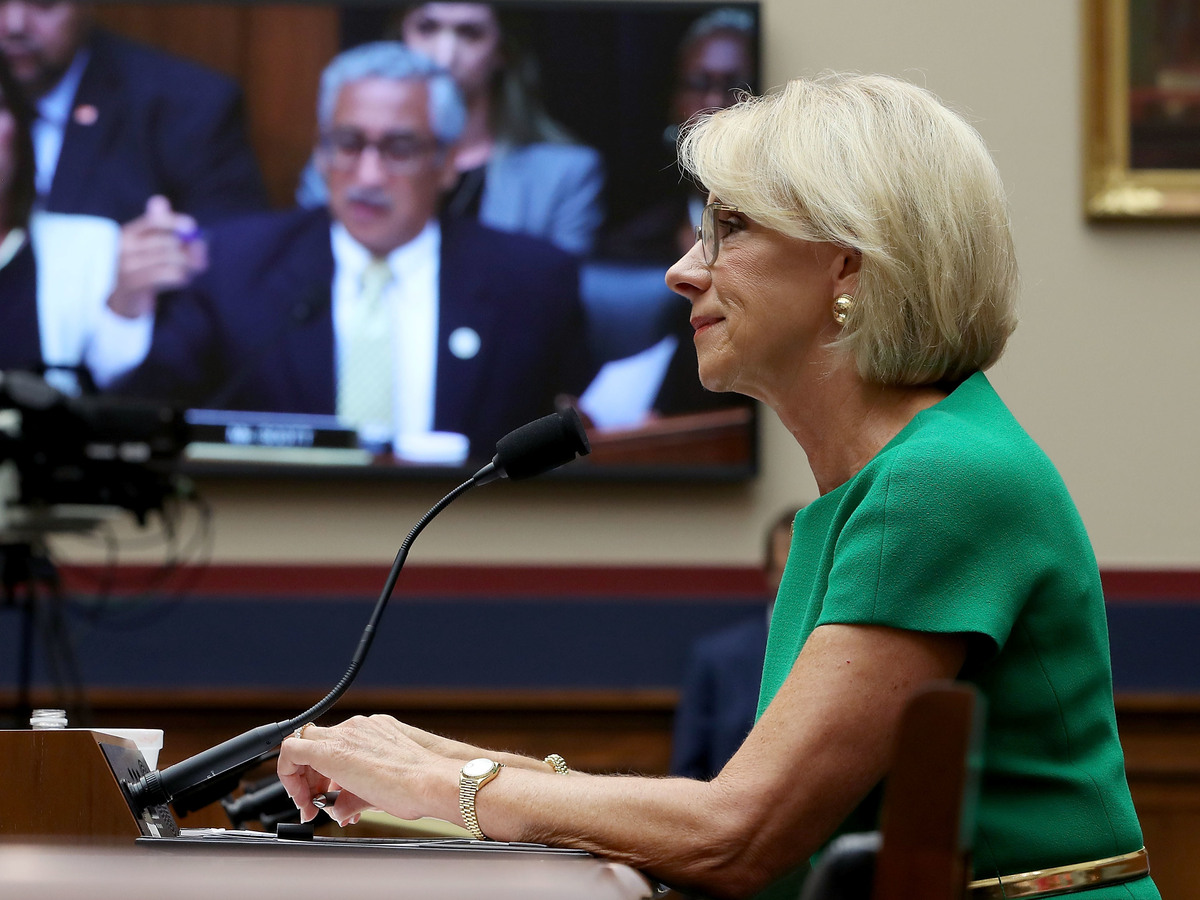 On Tuesday, Education Secretary Betsy DeVos fielded questions about school safety, civil rights, and for-profit colleges, among other topics, during a congressional hearing about her department’s priorities.

Rep. Bobby Scott, D-Va., asked DeVos about the TEACH grant program, which he called a “debacle.” The federal program offers teachers funds for an undergraduate or a master’s degree; in return, they teach a high-need subject, like math, for four years in a school that serves many low-income families. But NPR’s reporting has shown thousands of teachers have had these grants converted to loans for unclear reasons.

DeVos acknowledged that the department is “aware of the issues,” but said that legislation wouldn’t be required to fix them.

Rep. Marcia Fudge, D-Ohio, asked DeVos about the department’s Office for Civil Rights, which began dismissing claims of civil rights violations this spring, under updated guidance for responding to cases. Department representatives have said that the changes were meant to help the office manage its caseload.

DeVos said she was confident that the Office for Civil Rights was committed to upholding the Civil Rights Act of 1964.

“How do you do it if you continue to try to dismantle and defund the office?” Fudge asked. “I’m not understanding.”

“We haven’t done any such thing,” DeVos responded.

The aftermath of another school shooting

DeVos’s testimony came less than a week after a shooter killed 10 students and teachers at Santa Fe High School in Santa Fe, Texas.

Students and educators across the country took to Twitter with the hashtag #IfIDieInASchoolShooting — expressing sadness, but not shock, at the prospect of a shooting happening at their school.

#IfIDieInASchoolShooting make me a martyr. I want my death to mean something. Throw my body on the steps of the NRA’s door. Throw it on the white house lawn. Just make sure it means something.

Former Education Secretary Arne Duncan voiced his support for the idea of boycotting schools after another former education official tweeted it.

Maybe it’s time for America’s 50 million school parents to simply pull their kids out of school until we have better gun laws.https://t.co/JCBYstcHEA

Duncan later told The Atlantic, “there’s nothing easy or practical about [a school boycott], but it’s all relative. And we’re dealing with a reality today that’s infinitely harder than that.”

This is brilliant, and tragically necessary.
What if no children went to school until gun laws changed to keep them safe?
My family is all in if we can do this at scale.
Parents, will you please join us? https://t.co/Yo4wsFuJI5

Classes are winding down, but the wave of teacher activism that began with walkouts this spring hasn’t stopped.

Twelve Kentucky educators — from both parties — won state primary races, including Travis Brenda, a math teacher from eastern Kentucky. Brenda defeated Republican incumbent Jonathan Shell, a leader in the state’s House GOP, and he’ll face Democrat Mary Renfro this fall in the general election for a seat in the state House.

“I’m not one of the wealthy Republicans that’s looking to just give tax breaks to the wealthy while penalizing those in the working sector,” Brenda told NPR.

In March, teachers in Kentucky took to the state capitol to protest changes in their pension system tacked onto a sewage bill at the last minute. Like more than a million teachers across the country, they aren’t eligible for Social Security.

Educators from other states with strikes — including Oklahoma and Arizona — say they’re also turning their attention to the polls to push for more education support.

Undergraduate college enrollment in the U.S. is down for the sixth straight year. That decline is happening across the board in higher education — despite the popularity of a bachelor’s degree.

That’s according to a new set of numbers from the National Student Clearinghouse Research Center — a nonprofit that tracks students in degree-granting institutions. Though the number of undergraduates pursuing bachelor’s degrees this spring increased slightly, that uptick paled in comparison to the decline in enrollment for alternative pathways, like associate’s degrees and certificate programs.

A good explanation for the drop is the current job market: the unemployment rate is under 4 percent. The number of high school graduates has also flatlined — and is expected to stay flat over the next ten years, before it declines, thanks to low birth rates.