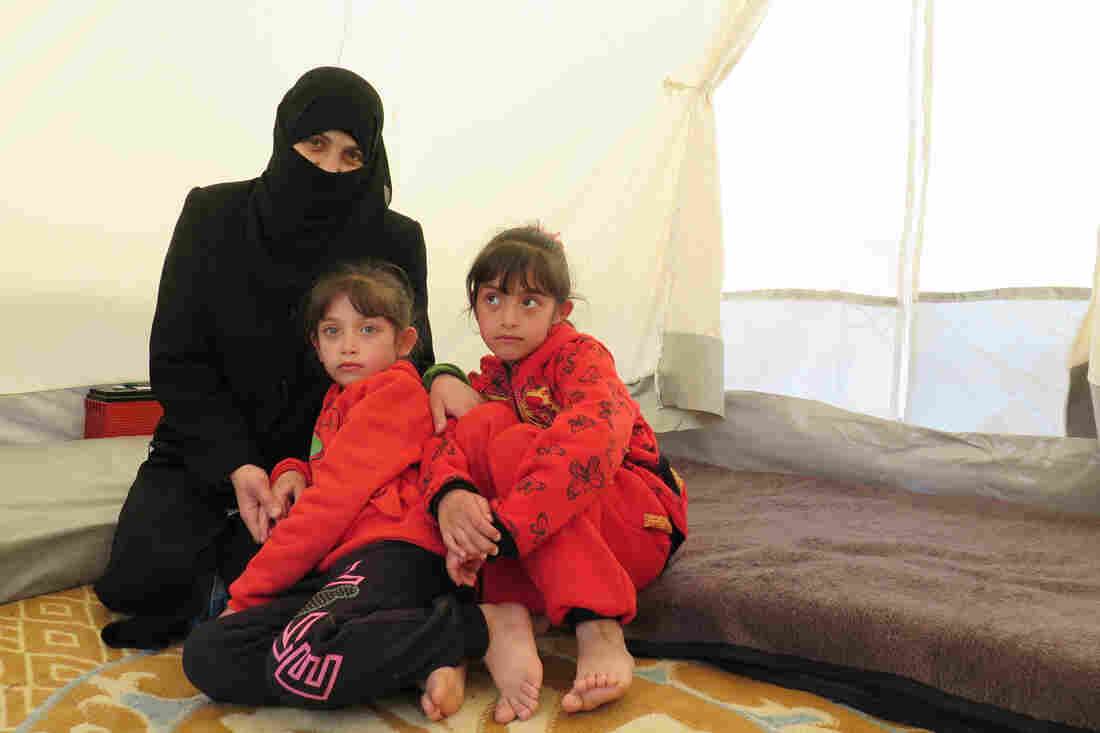 Amani and her twin daughters Masa and Malaz at a camp for displaced persons in northern Syria after fleeing Douma, a town near Damascus, where they say they suffered a chlorine attack. Lama al-Arian/NPR hide caption 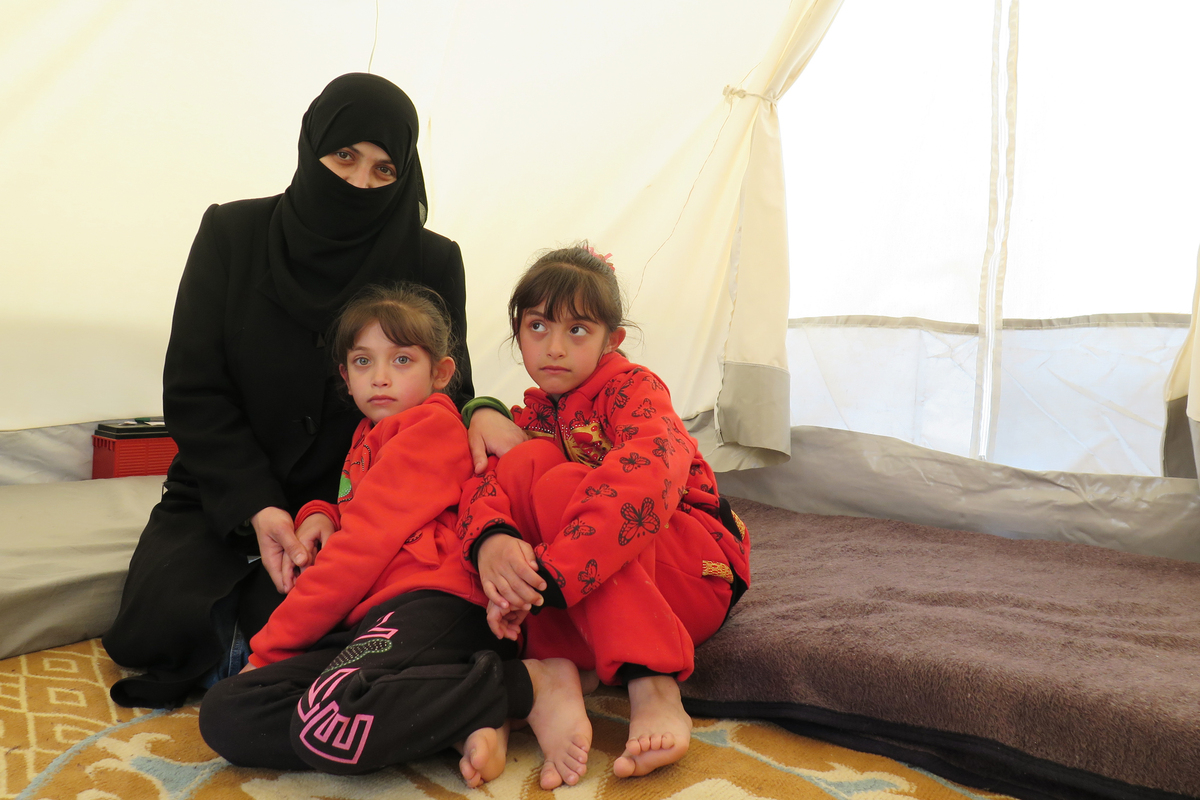 Amani and her twin daughters Masa and Malaz at a camp for displaced persons in northern Syria after fleeing Douma, a town near Damascus, where they say they suffered a chlorine attack.

Seema heard the children on the upper floors of the house scream “chlorine, chlorine!” Amina says she felt gas hit her lungs. Abu Faisal found himself caught in a yellow-tinged cloud.

These are just some of the testimonies collected by NPR from now former residents of Douma, a town outside the Syrian capital Damascus, who say that on the night of April 7, they endured the terrifying experience of a chemical weapons attack.

They detailed the incident at camps for the displaced in Aleppo province, in northern Syria. They had just arrived following the rebel surrender of Douma to the Syrian government, in a deal that left many residents exiled from their homes.

The men and women survivors looked gaunt, exhausted and shell-shocked from years lived under bombings and siege, followed by jarring displacement. Fearful for their safety, they asked that only their first names be used.

Reports of the suspected chemical weapons attack, including footage posted online by Douma opposition activists showing dozens corpses and children foaming at the mouth, drew strong international condemnation. The United States, France and Britain blamed the Syrian regime for the incident and together launched missile strikes against Syrian military targets on April 14.

The U.S. says it’s highly confident that evidence points to the use of chlorine and possibly a nerve agent, perhaps sarin. But so far, the type of weapons used in the apparent attack, and the perpetrator, have not been independently confirmed. 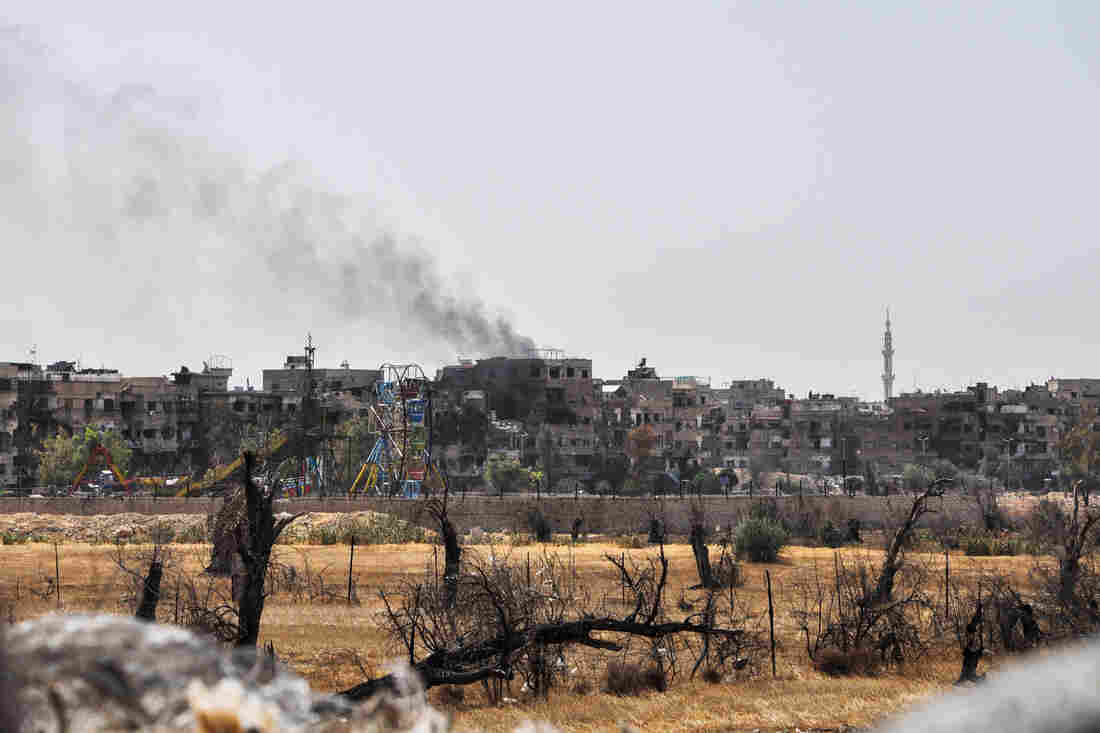 A picture taken during a Syrian army-organized tour on April 20 shows a view of Douma, on the outskirts of the capital Damascus, with a smoke plume rising in the background. Stringer/AFP/Getty Images hide caption 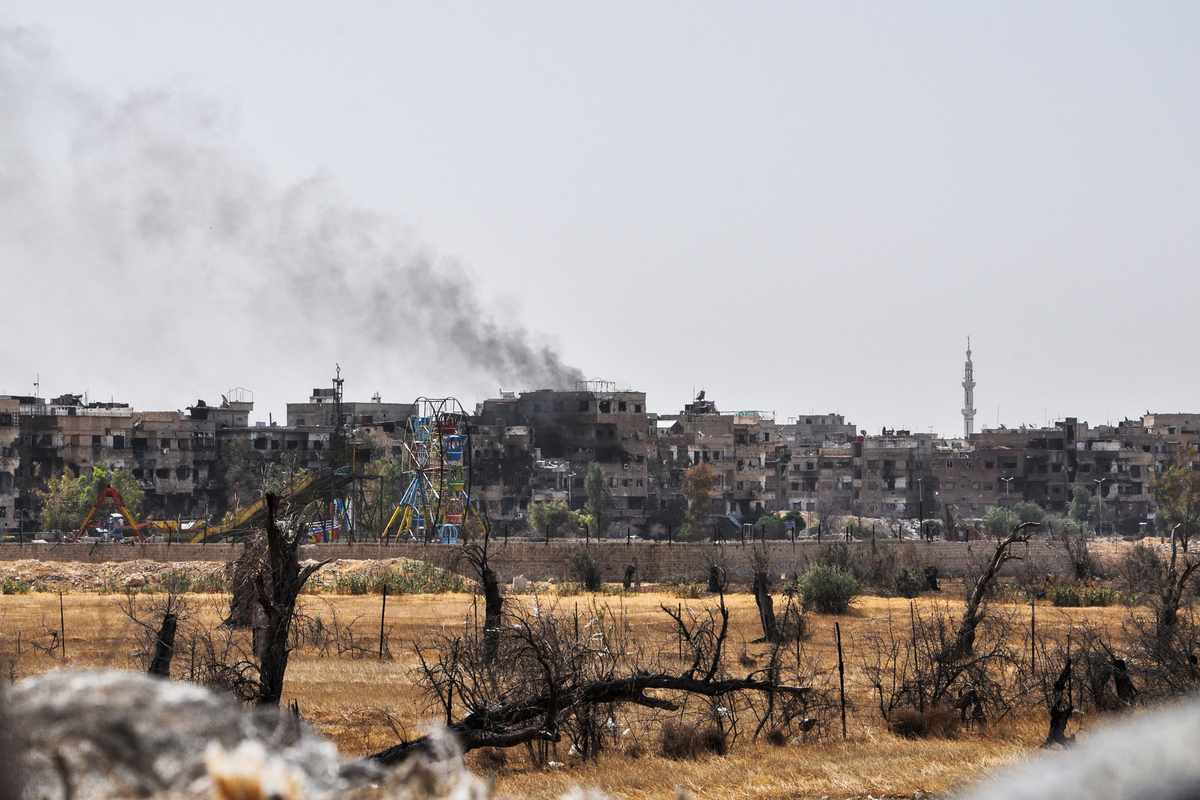 A picture taken during a Syrian army-organized tour on April 20 shows a view of Douma, on the outskirts of the capital Damascus, with a smoke plume rising in the background.

The Syrian government and its ally Russia have denied a chemical attack took place, calling the claims “a hoax” and alleging that the activists’ graphic videos were staged. Russia even accused the U.K. of staging it.

They’re not the only skeptics. The Syrian Observatory for Human Rights, a British-based monitoring group with a broad network in Syria, says it documented several deaths from “suffocation” in Douma on April 7, but it has steered clear of naming a chemical attack as a possible cause.

Rami Abdulrahman, the organization’s director, told NPR that dust and debris from the especially intense airstrike campaign may have caused civilians hiding in basements to suffocate.

Inspectors with the Organisation for the Prohibition of Chemical Weapons have been visiting Douma to collect samples to be sent to labs for analysis.

The testimonies gathered by NPR, in interviews at two separate shelters for the displaced in Aleppo province, were consistent with each other. Five people describing the attack said there was a strong chlorine smell.

Seema, 19, wearing a bright lilac hijab, described the night of the attack. She and her children were in a cramped basement with more than a dozen other families. They were sheltering from some of the worst bombardment by Syrian and Russian forces they’d experienced in Syria’s more than seven years of civil war.

When asked how young children would recognize such an attack, she explained: “These are the children of war. They were born in war and they recognize the smell of chlorine. It was very very strong.”

Seema said billows of gas swept into the home and down toward the basement. People caught in the gas started to suffocate, she said. “Their faces were turning blue.”

Chemical weapons experts explain the gas turns into hydrochloric acid when inhaled. It causes a buildup of fluid that can cause a victim to essentially drown. 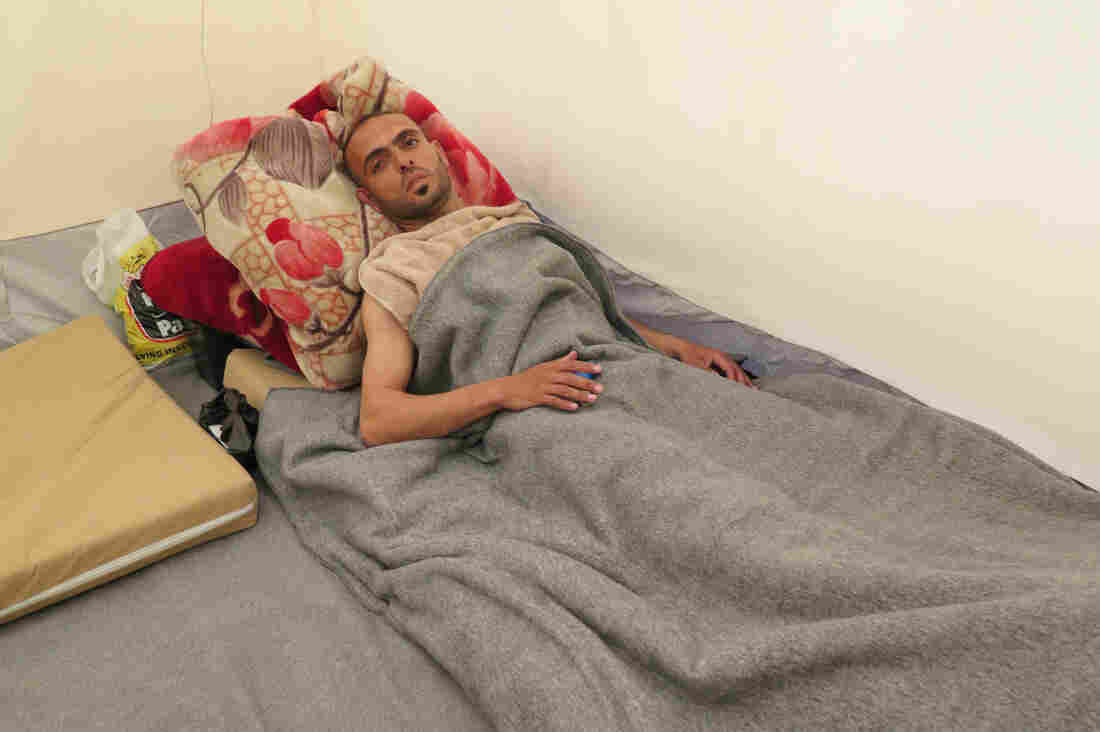 Abu Faisal lies in a tent in northern Syria, grasping his inhaler, after getting injured in the alleged April 7 chemical attack in Douma. Mahmoud al Basha/NPR hide caption 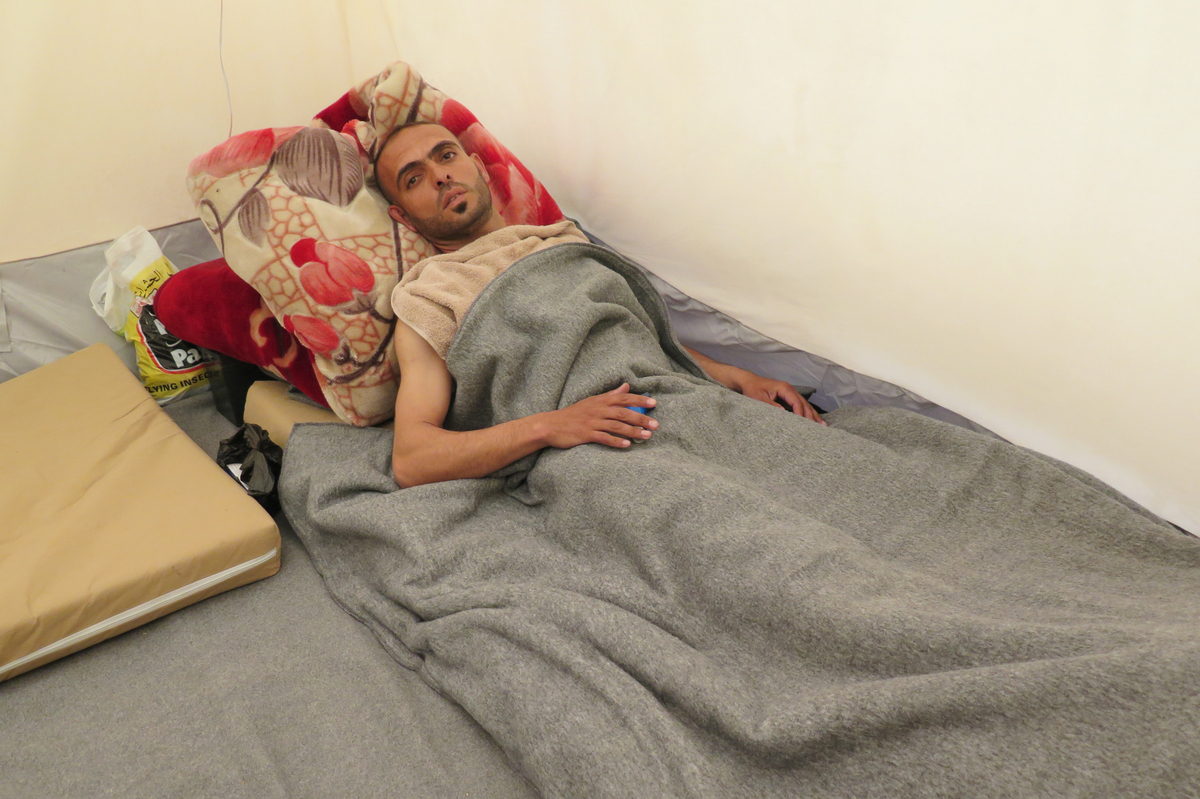 Abu Faisal lies in a tent in northern Syria, grasping his inhaler, after getting injured in the alleged April 7 chemical attack in Douma.

At a separate shelter in Aleppo province, people appeared sick from what they said was exposure to poisonous gas. Abu Faisal, a man in his 40s, lay under a gray blanket on a thin mattress in his tent, clutching an inhaler. He coughed and wheezed as he described what happened on April 7. He said he was caught up in a “yellow cloud.” Chemical weapons experts say the description is consistent with chlorine.

Amani, 34, a mother of 7-year-old twin daughters, said a chlorine attack preyed on her lungs and she felt her throat close up. She says she already suffered from lung problems before the attack, after years of sheltering in mildewed basements during the siege in Douma.

“When you’re in a chemical attack you start suffocating; you’re just dying to breathe,” Amani said.

She said she covered her children’s mouths cotton balls doused in water to try to protect them from the attack.

Since that night, Amani’s condition has worsened. A doctor in the shelter said Amani’s lungs were now infected and it was possible her symptoms were brought on by a chemical attack. Amani was speaking in a tent, where she has remained while waiting to be taken to a hospital.

Independent analysts and chemical weapons experts believe the evidence collected so far does point to a chlorine gas bomb. Eliot Higgins, the founder of the open-source investigation website Bellingcat, has analyzed online videos allegedly showing munitions used in the Douma attack. He says that long, yellow, modified canisters are consistent with the evidence found at the sites of other chlorine gas attacks in Syria. He notes he has not discovered evidence of a nerve agent, like sarin, in Douma.

Chlorine gas attacks are common in the Syrian war: United Nations investigators have confirmed dozens of chlorine attacks, and pro-opposition monitoring groups say they have documented hundreds of incidents. Military use of the toxin — as a choking agent — is banned under the chemical weapons convention, which Syria signed in 2013. But both the regime and the rebels have been accused of using it.

Most incidents have passed without much international attention. Chlorine dissipates quickly in the air. While lethal in high doses, death tolls after its attacks have been relatively low. The difference with the events in Douma, are the reports of a high body count.

The White Helmets, the civil defense group that operates in opposition areas, and the Syrian American Medical Society, a relief group supporting hospitals in opposition areas in Syria, issued a joint statement saying 43 people died and that about 500 people were injured in the Douma attack, showing “symptoms indicative of exposure to a chemical agent.”

Their figures remain the most widely cited. But so far assessments of the video and photo evidence and a list of names of casualties posted online don’t provide the evidence for it. Senior employees of two major international aid agencies with contacts in Douma told NPR they also do not have information to support this death toll. They asked not to be named to avoid jeopardizing the neutrality their organizations require to operate in Syria.

“When there’s a big medical emergency we usually get medical records from inside Douma and more video footage emerges. That hasn’t been the case in Douma,” said one. Another said their sources in Douma, have remained “unusually silent.”

The attack happened at an especially sensitive moment: The rebels were on the brink of capitulating to the regime. The international aid workers noted that, just as the Syrian regime may have political cause to call the attack a “hoax,” opposition members may have an interest in inflating the casualty numbers. “We don’t know or even believe that that happened,” one of the workers said. “It’s just a reason to be extra cautious.”

As chemical weapons investigators work to get to the bottom of the events of April 7 in Douma, its residents are trying to move on as best they can.

But the traumas of what they say they experienced run deep. As Amina talked to NPR at the camp, her twin daughters, Masa and Malaz, sat close, leaning into their mother. When asked about the future, 7-year-old Masa said: “I want to be a doctor so I can help in a chemical attack.”