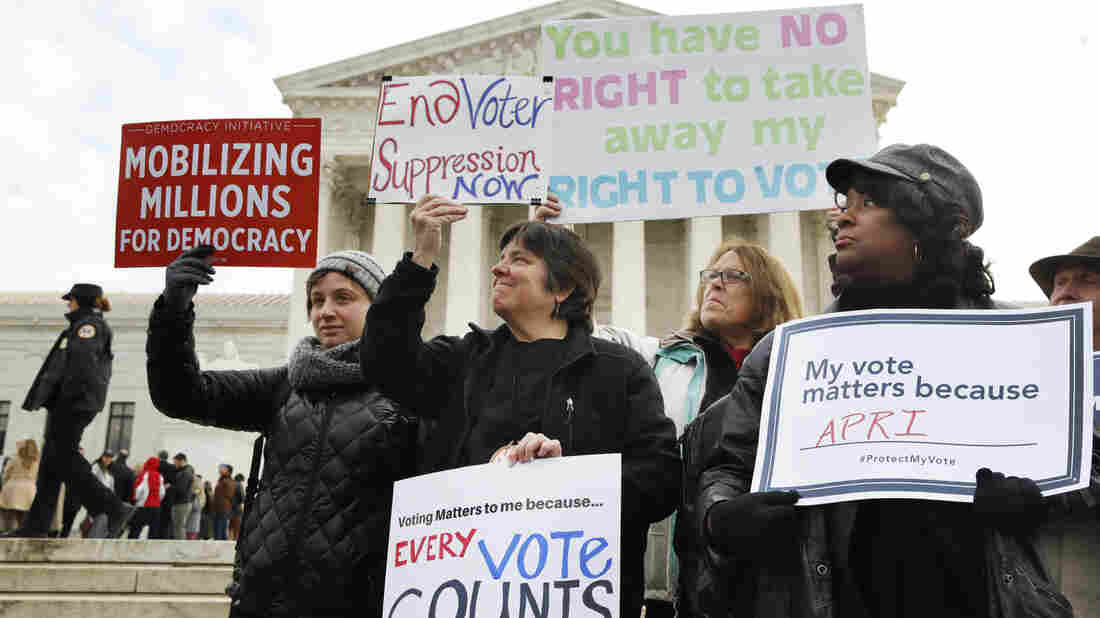 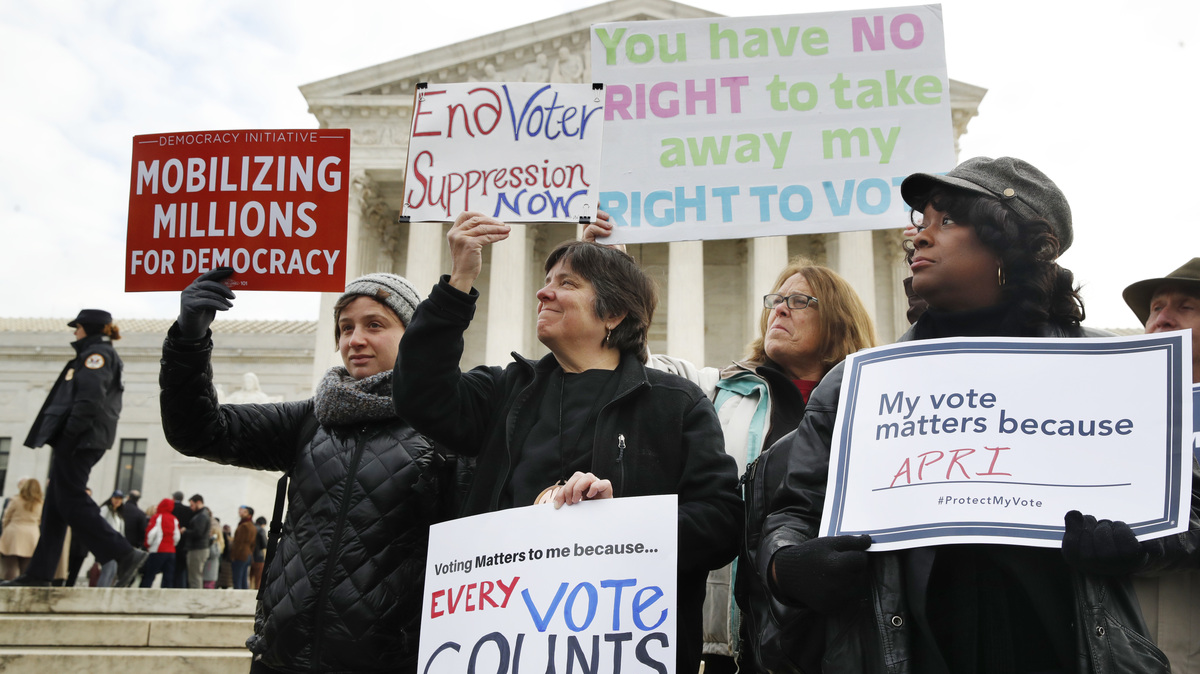 People rally outside of the Supreme Court in opposition to Ohio’s voter roll purges in January. The court upheld the controversial law Monday.

By a 5-4 margin, the U.S. Supreme Court upheld a controversial Ohio voter-purge law.

It’s known as the “use-it-or-lose-it” law, and it’s the most aggressive voter-purge system in the country. The state currently strikes voters from the registration rolls if they fail to vote in two consecutive elections — and if they fail to return a mailed address confirmation form.

Those challenging the law said it violated the National Voting Rights Act, which says that a state cannot strike someone from the rolls for failure to vote. The emphasis is to get more people to vote — and not have them purged.

Justice Samuel Alito wrote the majority opinion with the court’s other conservatives signing on. The first line of the opinion lays out evidence for why Alito sees the need to clean up voter rolls.

“It has been estimated that 24 million voter registrations in the United States—about one in eight—are either invalid or significantly inaccurate,” Alito writes, citing a Pew Center on the States study. “And about 2.75 million people are said to be registered to vote in more than one State.”

This was the same study that incoming Trump White House officials cited — misleadingly — to make the case that voter fraud was occurring and immigrants in the U.S. illegally were voting.

“Some numbers include the Pew Research study that said that approximately 24 million, or one out of every eight, voter registrations in the United States are no longer valid or significantly inaccurate,” Jason Miller, then-spokesman for the president-elect, told reporters in a conference call week after the November 2016 election. “And in that same Pew Research study, the fact that 2.5 million people have registrations in more than one state. So all of these are studies and examples of where there have been issues of voter fraud and illegal immigrants voting.”

The president himself claimed that he actually won the popular vote, despite losing it by about 2.9 million votes, because of voters who voted illegally. There has never been evidence that millions are voting illegally. In fact, a five-year Bush administration study resulted in 86 convictions.

The Help America Vote Act “dispelled any doubt that a state removal program may use the failure to vote as a factor (but not the sole factor) in removing names from the list of registered voters,” Alito notes. “That is exactly what Ohio’s Supplemental Process does. It does not strike any registrant solely by reason of the failure to vote.”

The lead plaintiff in the case, Larry Harmon, is a software engineer from the Akron area, who normally votes in presidential election years, but not the midterms. In 2012, neither Barack Obama nor Mitt Romney excited him, so he decided not to vote.

When he did decide to vote a couple of years later, he found he was no longer registered. He had been purged from the voter rolls, because he hadn’t voted in the previous two elections.

Failure to vote is not unusual in this country. In 2016, 29 percent of the registered voters in Ohio failed to vote. Nationwide, the number was even higher, more than a third, according to the U.S. Election Assistance Commission.