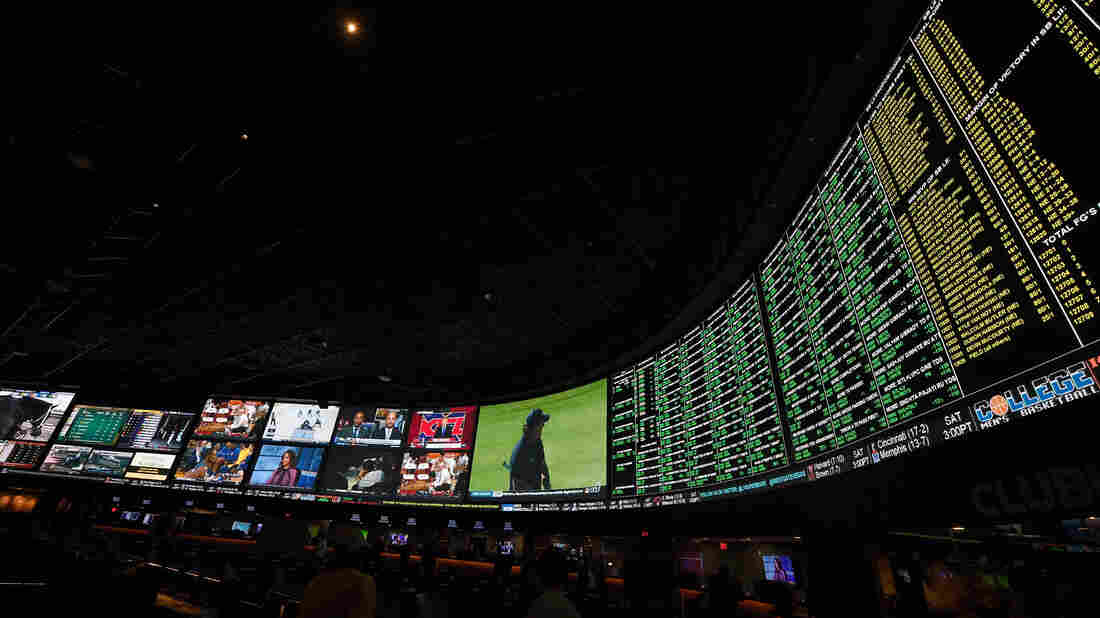 Proposition bets for Super Bowl LI are displayed at the Race & Sports SuperBook at the Westgate Las Vegas Resort & Casino on Jan. 26 in Las Vegas, Nev. — one of four states where sports betting is legal. Ethan Miller/Getty Images hide caption 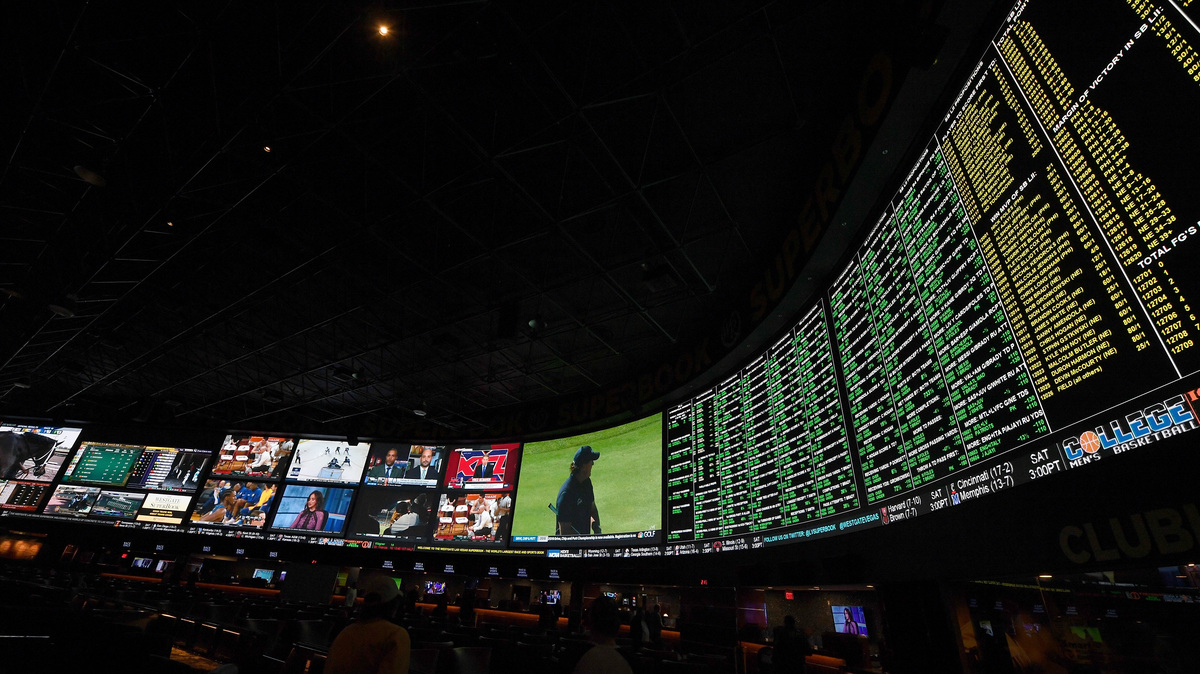 Proposition bets for Super Bowl LI are displayed at the Race & Sports SuperBook at the Westgate Las Vegas Resort & Casino on Jan. 26 in Las Vegas, Nev. — one of four states where sports betting is legal.

The Supreme Court has struck down a 1992 federal law that effectively prevented most states from legalizing sports betting, clearing up a legal gray area and opening a door for state governments to join in what has become a lucrative industry.

“Congress can regulate sports gambling directly, but if it elects not to do so, each State is free to act on its own,” the court wrote in a decision released Monday.

The law known as the Professional and Amateur Sports Protection Act, passed in 1992, prohibited sports betting, except in four states where it had already been legalized — Nevada, Delaware, Montana and Oregon. It gave the other states one year to legalize such betting, if they wanted to.

It was a busy day at the Supreme Court. It also handed down decisions on two other important cases, dealing with personal rights. They were:

Byrd v. US: The court unanimously agreed with the driver of a rental car who said he had his privacy rights violated by police during a traffic stop in Pennsylvania. Police found dozens of bricks of heroin and body armor in his trunk after discovering a warrant for his arrest in New Jersey. The man said he did not consent to a search, but police argued that his consent didn’t matter because his name was not ono the rental agreement. The Supreme Court disagreed and held that the man still maintained a reasonable expectation of privacy.

McCoy v. LA: The court ruled, by a 6-3 margin, in favor of an inmate who wanted to plead not guilty to a capital offense. His lawyer wanted him to plead guilty to avoid the death penalty. The court said, “Guaranteeing a defendant the right ‘to have the ASSISTANCE of Counsel for HIS defence,’ the Sixth Amendment so demands. With individual liberty—and, in capital cases, life— at stake, it is the defendant’s prerogative, not counsel’s, to decide on the objective of his defense: to admit guilt in the hope of gaining mercy at the sentencing stage, or to maintain his innocence, leaving it to the State to prove his guilt beyond a reasonable doubt.”

The ban was known as the Bradley Act, after its chief promoter, former basketball great Bill Bradley, who served three terms in the U.S. Senate.

Enacted 25 years ago, the law prohibited states from legalizing sports betting sports except where it was already legal.

In an NPR interview, Bradley said his motivation was simple, and personal. “Betting on sports was betting on human beings, and I thought that was wrong,” he explained. “It turns players into roulette chips. It makes the game, which is a game of high-level competition and excellence, into slot machines, and I don’t think that should be what we do in this country.”

Bradley said there was virtually no congressional opposition to his bill back in 1992, though Bradley added that Donald Trump, with failing investments in Atlantic City casinos at the time, lobbied against it, believing that sports betting was the answer to his financial problems there.

After the bill passed, New Jersey did not seek to legalize gambling in its one-year window of opportunity.

More recently, it tried to get out of the ban, hoping for increased state revenue, but the state repeatedly lost in the lower court.

The Supreme Court’s court decision reversing that outcome will make it easier to open the door to sports betting.

But the status quo struck down by the Supreme Court looks almost quaint in light of increased pressure to legalize sports betting across the board.

The American Gaming Association estimates that illegal sports betting has grown to $150-billion-a-year market. And cash-starved states are salivating at the thought of raising billions from legalizing and licensing that activity, not to mention taxing the proceeds.

New Jersey, home to at least a half dozen shuttered Atlantic City casinos, is a state where Republicans and Democrats since 2011 have been trying to overturn the federal ban or somehow get around it.

After oral arguments in December, then-Gov. Chris Christie, R-N.J., said on the Supreme Court steps, “If we’re successful here, we can have bets being taken in New Jersey within two weeks of a decision by the court. We’re like boy scouts; we’re prepared.”

What the law did and didn’t do

Lawyers for New Jersey argued that the law forces state governments to enforce a federal initiative, which the Supreme Court has repeatedly ruled is unconstitutional.

Lawyers for the sports leagues said that the federal law is not forcing states to do anything, but rather telling them what not to do, which wouldn’t violate the Constitution.

As NPR reported after oral arguments in December, a majority of the justices appeared to have “serious doubts” about the constitutionality of the law.

And on Monday, they put those doubts in writing.

“Our job is to interpret the law Congress has enacted and decide whether it is consistent with the Constitution,” the court said in its decision. “PASPA is not.”

America has seen a cultural shift on the question of sports gambling. NPR’s Uri Berliner reported in 2015 that ESPN has been increasing its coverage of gambling by, for instance, directly referencing the point spread set by oddsmakers.

And while the major U.S. pro and college sports leagues have “always sought to distance themselves completely from gambling,” as Berliner put it, NBA Commission Adam Silver came out in favor of legalizing (and regulating) sports betting in 2014.

Then there’s the popularity of daily fantasy sports — an industry that has weathered legal challenges of its own. Fantasy sports leagues amount to “thinly veiled gambling,” as ESPN’s Rob King told Berliner, and have helped push sports betting into the mainstream.

Meanwhile, the sports betting decision could have implications for a wide range of other state laws — including those legalizing marijuana, Nina noted. Amy Howe, writing for SCOTUSblog, suggests state laws decriminalizing physician-assisted suicide and self-driving cars could also be affected.