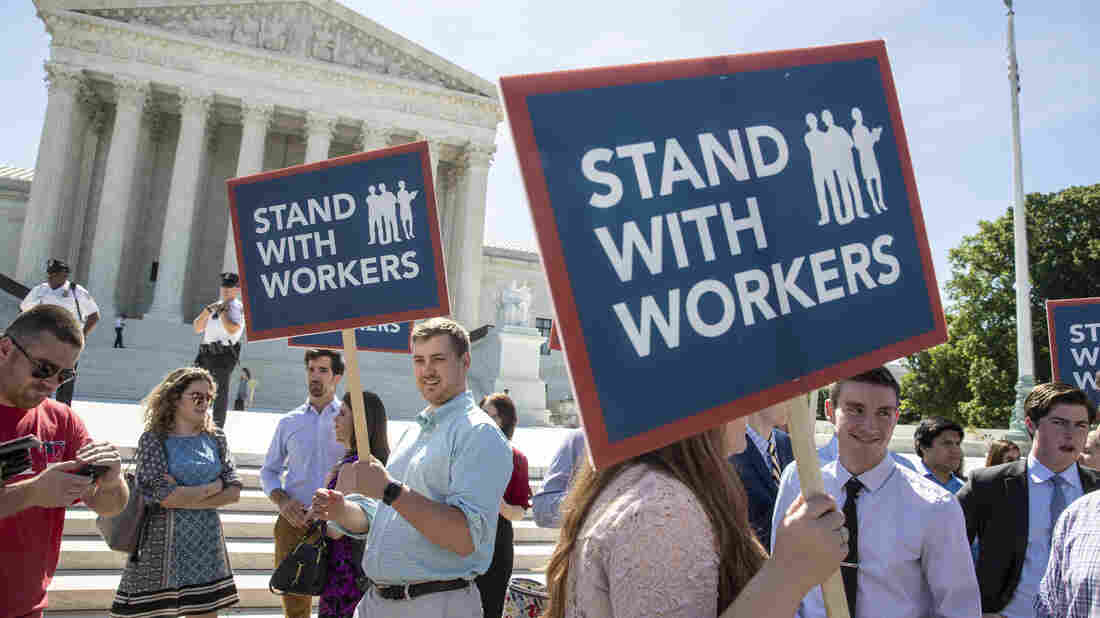 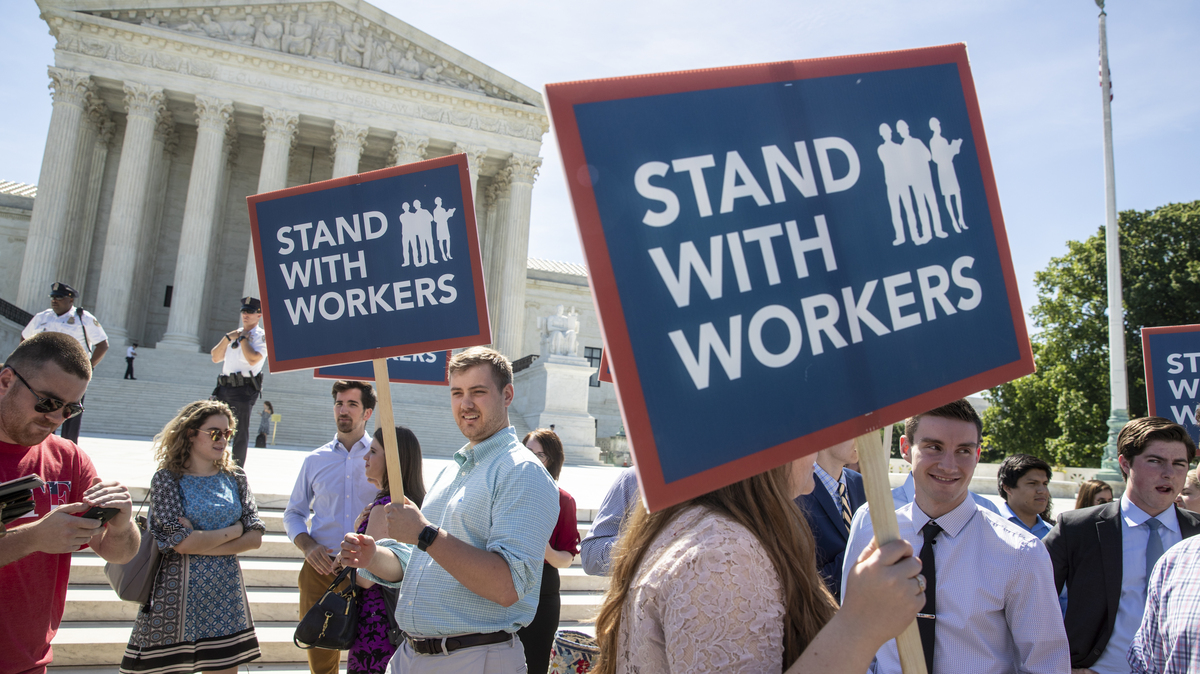 People gather at the Supreme Court awaiting a decision in an Illinois union dues case, Janus v. AFSCME, on Monday.

In a blow to organized labor, the U.S. Supreme Court ruled Wednesday that government workers who choose not to join a union cannot be charged for the cost of collective bargaining.

The vote was a predictable 5-to-4 margin. Justice Samuel Alito wrote the majority opinion with the court’s conservatives joining him.

“Under Illinois law, public employees are forced to subsidize a union, even if they choose not to join and strongly object to the positions the union takes in collective bargaining and related activities,” Alito wrote. “We conclude that this arrangement violates the free speech rights of nonmembers by compelling them to subsidize private speech on matters of substantial public concern.”

The decision reverses a four-decades-old precedent and upends laws in 22 states. It also comes on the last day of this Supreme Court term, adding an exclamation point on the final sentence of a chapter that began with the appointment of conservative Justice Neil Gorsuch and saw conservative wins in decision after decision. This term was also an affirmation of the risky political gambit played by Senate Majority Leader Mitch McConnell, who denied a confirmation hearing for Judge Merrick Garland, President Obama’s pick for the court after Justice Antonin Scalia died.

The plaintiff in this case, Mark Janus, a child-support specialist for the state of Illinois, challenged a requirement that government workers who opt out of a union still have to pay partial dues to cover the union’s cost of negotiation and other functions.

In 1977, the Supreme Court had drawn a distinction between such mandatory “agency fees” and other, voluntary union dues, which might be used for lobbying or other political activity.

Wednesday’s decision erases that distinction. The court’s conservative wing found that negotiations by public sector unions are inherently political and nonmembers cannot be compelled to pay for them.

“In addition to affecting how public money is spent, union speech in collective bargaining addresses many other important matters,” Alito wrote. “We have often recognized that such speech ‘occupies the highest rung of the hierarchy of First Amendment values’ and merits ‘special protection.'”

Alito dismissed the argument that allowing non-members to opt out of negotiating fees would allow them to unfairly piggyback on their dues-paying coworkers.

Janus “strenuously objects to this free-rider label,” Alito wrote. “He argues that he is not a free rider on a bus headed for a destination that he wishes to reach but is more like a person shanghaied for an unwanted voyage.”

The high court heard a similar case in 2016, but deadlocked 4 to 4 after Scalia’s death, giving public sector unions a two-year reprieve.

Wednesday’s ruling is a victory for conservative activists who have been waging a multi-pronged battle against organized labor — and a potentially crippling blow for public sector unions.

“Public employee unions will lose a secure source of financial support,” Justice Elena Kagan wrote in a dissenting opinion. “Across the country, the relationships of public employees and employers will alter in both predictable and wholly unexpected ways. Rarely if ever has the Court overruled a decision — let alone one of this import — with so little regard for the usual principles of stare decisis,” that is, allowing past rulings to stand.

“This case is yet another example of corporate interests using their power and influence to launch a political attack on working people and rig the rules of the economy in their own favor,” Lee Saunders, president of the American Federation of State, County, and Municipal Employees, said in a statement when the case reached the high court.

Government workers have been a relative stronghold in an otherwise shrinking labor movement. More than a third of the public sector workforce is unionized, compared with less than 7 percent in the private sector.

A survey by the AFSCME — the union Janus would have to pay into — found that if agency fees were no longer mandatory, 15 percent of employees would stop paying them while 35 percent would continue to pay. The balance of workers were “on the fence.”