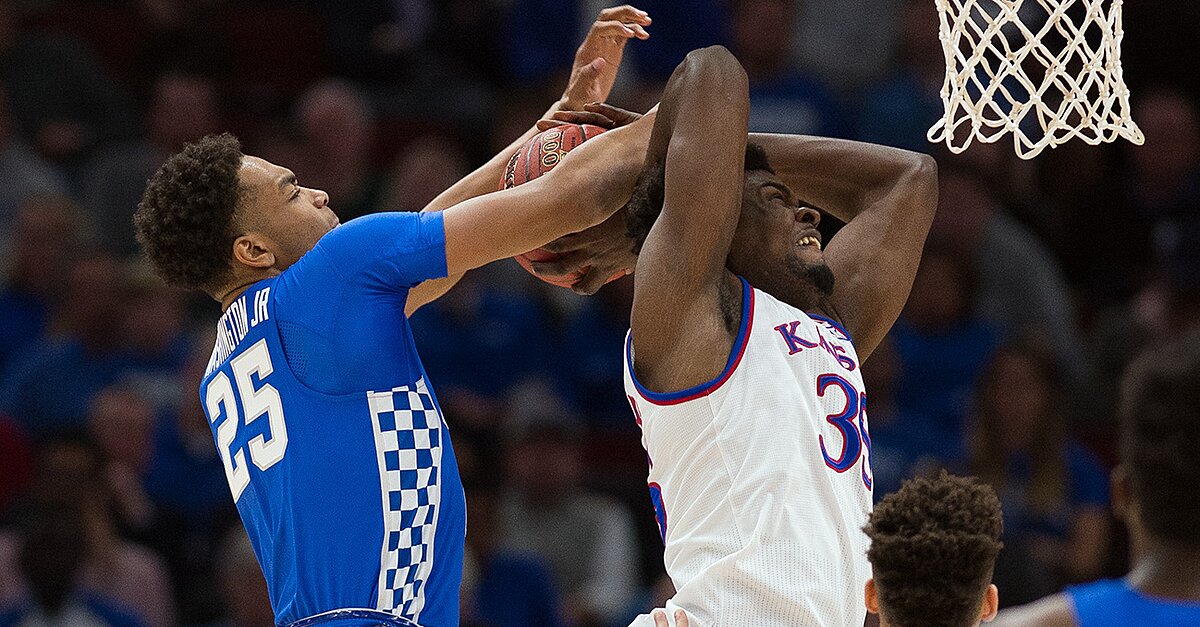 The vast majority of the intrigue that surrounds college basketball’s offseason is over. NBA draft decisions are in, most transfer destinations have been determined and the top uncommitted recruits have chosen schools. There’s still a few moving parts out there (such as Stanford grad transfer Reid Travis) and we could always see a summer surprise (hello, Marvin Bagley’s reclassification last year), but for the most part, teams now know what their rosters will look like come October.

All of that means it’s time to revise our post-national title game Way-Too-Early Top 25, taking into account what’s unfolded over the last two months.

The Jayhawks stay at No. 1 despite the additional departures of Malik Newman and, apparently, Lagerald Vick. This will still be a loaded team, highlighted by the return of Udoka Azubuike, the arrival of top-40 recruits Quentin Grimes, Devon Dotson and David McCormack and the addition of transfers Dedric Lawson, K.J. Lawson and Charlie Moore to the active roster. The balance here could be key, because while the Jayhawks have plenty of new faces, they won’t all be adjusting to the college game for the first time. The transfers already spent a year practicing in Lawrence, and role players from last season like Marcus Garrett, Silvio De Sousa and Mitch Lightfoot shouldn’t be overlooked.

The Blue Devils’ ridiculous level of talent coming in is undeniable, and they got yet another boost in early May when 2019 five-star forward Joey Baker committed and reclassified to the 2018 class. Duke lost its entire starting lineup after Trevon Duval and Gary Trent Jr. joined the program’s already-expected departures, and there will be no senior presence like Grayson Allen this time around. That means there’s a lot of pressure on their stud freshmen to live up to expectations. The bet is that they do, but as we’ve learned in recent years in college hoops, that’s never a sure thing.

The Wildcats got P.J. Washington, Nick Richards and Quade Green back from their 2017 freshman class, then jumped up to this year’s No. 2 recruiting class with the late commitment of five-star forward E.J. Montgomery, the No. 9 player in the 2018 class. They may not be done either, with Stanford leading scorer Reid Travis visiting both Lexington and Villanova soon. The addition of Travis, who averaged 19.5 points and 8.7 rebounds in the Pac-12 last season, would be a huge boon and would provide some veteran leadership to what will again be a young Kentucky squad.

The Zags take a leap into the top five here after a best-case scenario offseason in regards to departures, as none of Killian Tillie, Rui Hachimura or Zach Norvell even so much as tested the NBA draft waters. Rising senior point guard Josh Perkins did have shoulder surgery, however, and the Bulldogs will need a full recovery from him to reach their potential in 2018–19. Keep an eye on rising sophomore wing Corey Kispert.

Getting Luke Maye back for his senior season was huge for the Tar Heels. He makes for three returning starters, while No. 3 recruit Nassir Little should slide into Theo Pinson’s departing wing spot. The biggest question here is still at point guard, where Joel Berry must be replaced, but if North Carolina gets the necessary growth from the likes of Garrison Brooks and Sterling Manley down low, Roy Williams will have a stacked frontcourt.

De’Andre Hunter’s early decision to return to Charlottesville a little a month after his crushing March injury was big for the Cavaliers. Virginia now returns three starters (Kyle Guy, Ty Jerome and Jack Salt) plus the ACC Sixth Man of the Year in Hunter, who should now slide into a starting role. Replicating last season’s historically good defense will be tough, but the Hoos should once again be very strong on that end and could see players like Guy and Hunter take the next step offensively.

Another winner of the NBA early-entry decisions, the Wolf Pack team that fell just short of the Elite Eight got all of Jordan Caroline, Cody Martin and Caleb Martin back. Additionally, it got an important late commitment from five-star forward Jordan Brown and is hoping starting point guard Lindsey Drew, who ruptured his Achilles in February and missed the NCAA run, will be healthy and back on the court in the fall.

The Vols’ offseason has gone as expected, with Admiral Schofield declaring for the draft before announcing his return in late May to cement the fact that the co-SEC champs return everyone except graduating senior role player James Daniel. The blue bloods have garnered most of the attention this offseason, but if you’re looking for a not-so-darkhorse Final Four candidate this far out, the Volunteers could be it.

The departures of Miles Bridges and Jaren Jackson Jr. were expected, and while they’ll no doubt hurt, there’s still plenty of talent in East Lansing. Nick Ward, who posted the top offensive rebounding rate in the country last season, is back for his junior year, along with the likes of Cassius Winston, Matt McQuaid and Joshua Langford. Four-star forward Marcus Bingham Jr. is the highest-ranked (No. 62) of Tom Izzo’s incoming recruits.

The Wildcats take one of the biggest hits of these updated rankings after Donte DiVincenzo and Omari Spellman joined Mikal Bridges and Jalen Brunson in leaving early for the NBA draft. Villanova can still be a strong team next year and even the Big East favorite, but what it’s losing shouldn’t be understated. Next year’s team will now be in the hands of upperclassmen Phil Booth and Eric Paschall, rising sophomores Collin Gillespie and Dhamir Cosby-Roundtree and arrivals like five-star point guard Jahvon Quinerly, four-star forwards Cole Swider and Brandon Slater and Albany grad transfer Joe Cremo. Like Kentucky, Villanova would stand to benefit greatly if it lands Reid Travis.

The Hokies didn’t have to sweat out any draft decisions, though backup guard Tyrie Jackson transferred out last month. Look for Justin Robinson to lead the way again next year, though rising sophomore Nickeil Alexander-Walker is an ideal breakout candidate.

The Tigers got good news and bad news over the last few weeks, but more of the former than the latter. Jared Harper, Bryce Brown and Austin Wiley all withdrew from the draft, as did leading scorer Mustapha Heron—only Heron then transferred to St. John’s. There’s enough here for Bruce Pearl’s squad to once again contend in the SEC, only this year it won’t be a surprise.

Both Esa Ahmad and Sagaba Konate are returning to Morgantown, which should keep the Mountaineers competitive in the Big 12, albeit a rung below loaded Kansas. The defense will take a hit without Jevon Carter, but you can always count on Press Virginia to wreak havoc.

With Barry Brown Jr. returning after declaring for the draft without an agent, the Wildcats are set to bring back their entire starting lineup from a team many forget finished fourth in the ultra-competitive Big 12. The focus should now be on improving the offense after posting a top-25 defense in 2017–18. Will Xavier Sneed parlay his strong NCAA tournament into a junior year breakout?

Freshman Troy Brown chose the NBA over a return to Eugene, which means the Ducks are losing three of their top four scorers (the lone returnee of that group being Payton Pritchard). Their No. 4 ranked recruiting class, headlined by Bol Bol, brings plenty of promise but will need to produce. Oregon should be one of the preseason favorites in a weak Pac-12.

The Wolverines’ previous top-five rank here came with the caveat of Moritz Wagner coming back for his senior season. It’s not surprising that the star big man’s return didn’t materialize, but it does temper the expectations a bit for the reigning national runner-up. Still, Charles Matthews did opt for another season in Ann Arbor to anchor a younger core, and he should be Michigan’s top option offensively.

With Shelton Mitchell, Marcquise Reed and Elijah Thomas all returning, the Tigers stand to build on one of the program’s most successful seasons ever. Their top-10 defense carried them last season and should be strong once again.

Aaron Holiday announced early that he was declaring for the NBA draft, but the Bruins got good news before the deadline when Kris Wilkes, Jaylen Hands and Cody Riley all announced their returns. Along with Prince Ali, that gives UCLA three starters back, while Riley and Jalen Hill (both former four-star recruits) will suit up for the first time after spending last season suspended for their role in the team’s shoplifting debacle. That’s a lot of young talent—before you add the nation’s No. 6 recruiting class.

It seemed more likely than not that point guard Tremont Waters would return for his sophomore season, and the SEC All-Freshman Team honoree did just that. With him back in the fold and set to be joined by the country’s No. 3 recruiting class, LSU still stands to be one of the nation’s most improved teams in 2018–19.

We previously wrote that the biggest question for the Seminoles’ offseason would be whether Phil Cofer was granted an extra year of eligibility by the NCAA. Cofer was indeed given that year in late May, a nice boost for a Florida State team that made an unexpected Elite Eight run and also brings back senior Terance Mann. FSU’s length should once again give opponents fits.

The decision of leading scorer Jalen Hudson was the big question hanging over the Gators’ spring, and with him back on board they return three of their top five scorers and a top-20 recruiting class, led by five-star point guard Andrew Nembhard. Will it be enough to hang with the likes of Kentucky, Tennessee and Auburn atop the SEC? We’ll see.

The status quo remains the same for the Horned Frogs, who didn’t suffer any unexpected departures or early NBA draft entries. If injury-plagued Jaylen Fisher can come back and stay healthy, TCU should be in the top tier of the Big 12.

Not much has changed for the Ramblers, who are still set to bring back three key starters in Clayton Custer, Marques Townes and Cameron Krutwig. They did, however, smartly lock down coach Porter Moser to a five-year extension. Don’t overlook Loyola.

The Bulldogs haven’t made the NCAA tournament since 2009, but that seems set to change next season now that they’re bringing back the core of a team that won 25 games and made the NIT semifinals. That core includes the Weatherspoon brothers, Quinndary and Nick, who combined for 25 points per game last year. MSU also brings in a strong recruiting class led by top-30 forward Reggie Perry.

Tyus Battle’s decision to return to Syracuse was huge for the program, which can now look to build off last year’s surprising Sweet 16 run instead of rebuilding. Battle, Frank Howard and Oshae Brissett will make up the Orange’s core.