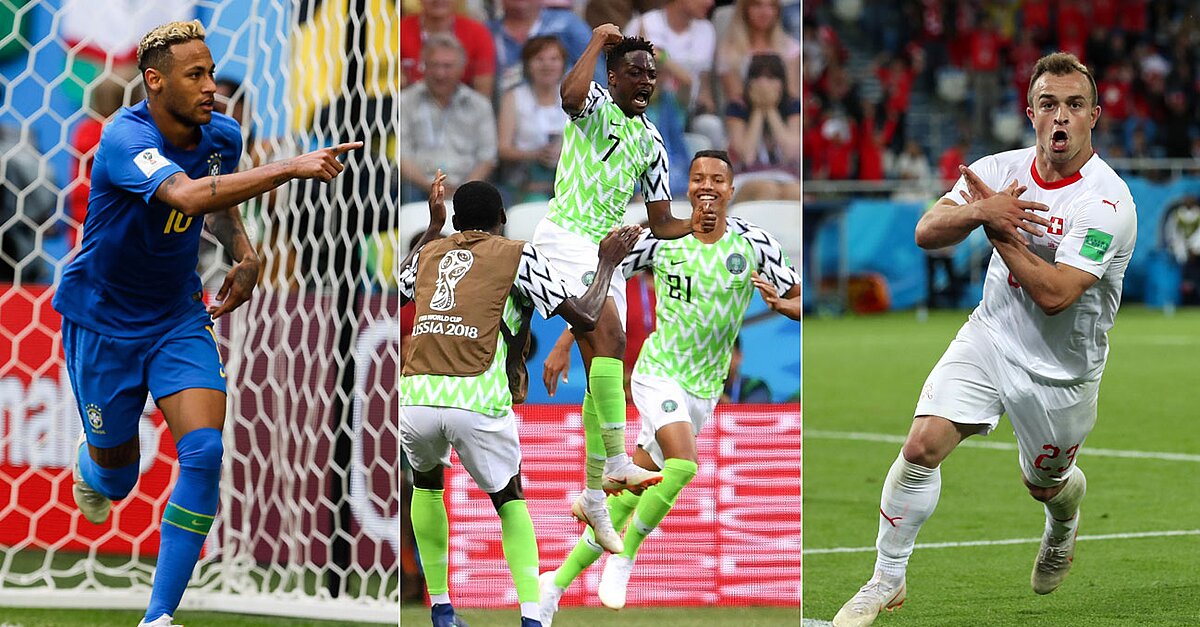 MOSCOW — Day 9 of World Cup 2018 is done, highlighted by Brazil’s late 2-0 win against Costa Rica and the tears of Neymar, Nigeria’s breathtaking 2-0 victory against Iceland and Switzerland’s 2-1 comeback triumph against Serbia.

The results set up what will be an incredible set of final matchdays across both groups. In Group D, only Croatia is through, and Nigeria, Iceland Argentina all remain alive for the second spot in the knockout stage. In Group E, no team has secured its knockout place yet, setting up a tense Brazil-Serbia encounter and an important Switzerland-Costa Rica one, even with Los Ticos being eliminated after their hard-fought loss.

Here are my five thoughts on Day 9:

• Subs made the difference for Brazil

It took more than 90 minutes, but Brazil finally broke through against a resilient Costa Rica for two goals in stoppage time to get three points. The coach, Tite, made some smart second-half changes, replacing Willian with Douglas Costa after 45 minutes and then Paulinho with Firmino after 68.

Costa was an instant energy upgrade, and Firmino worked well as the set-up man we’ve come to know well with Liverpool. Firmino beat two defenders to the header that led to Brazil’s long-awaited opener, knocking it to Gabriel Jesus, who toe-poked to scorer Philippe Coutinho. Against packed-in defenses like Costa Rica’s, Firmino should start up top next to Gabriel Jesus.

Yes, Brazil’s resurgence the last couple years has been due largely to great balance under Tite, but Firmino is so good at setting up his attacking teammates that he should be on the field more often.

• Musa brings something special to Nigeria

CSKA Moscow striker Ahmed Musa had another big two-goal World Cup moment to go with his brace in 2014 against Argentina—and the goals showed the special abilities that Musa brings to the table.

On the first goal, coming on the counter off a cross by Victor Moses, Musa showed tremendous skill to bring the ball down with a stab of a first touch before waiting-waiting-waiting to take it off the ground with his shot into the back of the net. On Musa’s second goal, he turned on the jets to clown Iceland’s Kari Arnason, then showed more poise to wait for goalkeeper Hannes Halldórsson to commit before firing it in.

Why Musa didn’t start in Nigeria’s opening-game loss to Croatia is a head-scratcher, but you can be pretty certain he’ll start in the group finale against Argentina.

The World Cup’s favorite underdog had a huge opportunity to get close to advancing to the round of 16 if it could have beaten Nigeria on Friday. But Iceland didn’t show much at all in the way of attacking play, and Gylfi Sigurdsson wasted a chance to bring Iceland back into it when he launched his late penalty high over the crossbar. That could prove extremely costly should Group D come down to goal differential.

Iceland’s defense, its strong suit, eventually got exposed by the skill and speed of Musa. While Iceland still has a chance to advance, it will have to get a better performance against Croatia, a team that it knows well, having finished ahead of Croatia in its UEFA World Cup qualifying group for this World Cup and having lost to the Croatians in the playoff for the 2014 World Cup. There will be no mysteries between these two teams.

Remarkably, Argentina still has a decent shot to advance to the knockout rounds following Friday’s results. The Argentines will have to beat Nigeria and then either hope that Iceland does not beat Croatia (which is already through), or that a win comes at less of a margin than its own, to cover the goal differential. But every team in the group will have a shot to advance when the simultaneous games kick off at 2 p.m. ET on Tuesday.

That said, Argentina has been the worst team in the group so far, and if Nigeria shows off the speed and skill that it did against Iceland, it’s not hard to imagine the Super Eagles running roughshod over Argentina’s back line. Then there are questions about Croatia. Will coach Zlatko Dalic sit some of his starters against Iceland? Croatia has yet to clinch first place in the group, but it looks likely. Perhaps Iceland can grab an advantage from that.

Second-half goals by Granit Xhaka and Xherdan Shaqiri turned around an early deficit against Serbia and put the Swiss in a terrific spot to advance from Group E.

In one of the best games of the tournament, Switzerland totally changed the momentum in the second half. Xhaka has a terrific left-footed shot from distance, and he showed it off on his 52nd-minute equalizer. As for Shaqiri, well, he is one of the most unique looking human beings in world soccer. Short, muscle-packed and built like a battering ram, he converted the game-winner on a 90th-minute sequence keyed by Xhaka’s pass to secure the victory for the Swiss. Fantastic work, but there’s more to be done if they want to play on.