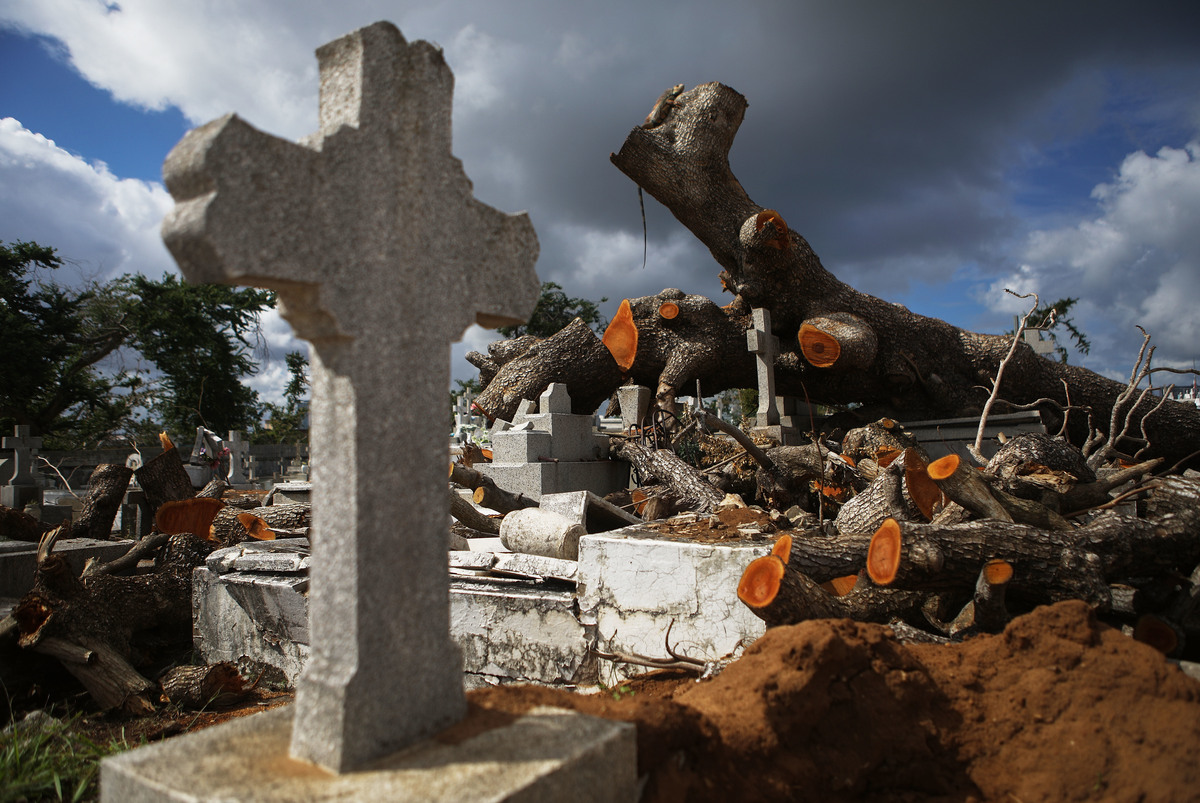 A tree toppled by Hurricane Maria rests over damaged graves in the Villa Palmeras cemetery in San Juan, Puerto Rico, in December 2017.

Perhaps 5,000 people died in Puerto Rico in 2017 for reasons related to September’s Hurricane Maria, according to a study that dismisses the official death toll of 64 as “a substantial underestimate.”

A research team led by scientists at the Harvard T.H. Chan School of Public Health didn’t simply attempt to count dead bodies in the wake of the powerful storm. Instead, they surveyed randomly chosen households and asked the occupants about their experiences.

From that approach, they concluded that between Sept. 20 and December 31, 2017, there were 4,645 “excess deaths” – that is, deaths that would not have occurred if the island hadn’t been plunged into a prolonged disaster following the devastating storm.

But the estimate isn’t as precise as the figure implies. The researchers calculate there’s a 95 percent likelihood the death toll was somewhere between about 800 and 8,500 people. They say about 5,000 is a likely figure.

The findings are being published Tuesday by the New England Journal of Medicine.

The research team randomly selected 3,299 households in Puerto Rico. Local scientists surveyed them over the course of three weeks in January. People in those homes reported a total of 38 deaths. The scientists then extrapolated that finding to the island’s total population of 3.4 million people to estimate the number of deaths. The researchers then subtracted deaths recorded during that same period in 2016, and concluded that the mortality rate in Puerto Rico had jumped 62 percent in the three months following the storm.

The Puerto Rico Department of Health didn’t respond immediately to requests for comment about the study.

The death rate is a contentious subject, in part because federal and island governments haven’t responded as rapidly to the disaster as they have in other hurricane emergencies. The study notes that, 83 percent of the households in Puerto Rico were without electrical power for the duration of their study, which stretched more than 100 days, from the date of the hurricane until the end of 2017.

Puerto Rican residents and outside observers have long argued that the official death toll is hopelessly inadequate. It captures the number of deaths the medical examiner attributed directly to the storm — the high water and howling winds, which was the worst natural disaster on record for the U.S. territory. Maria came ashore as a Category 4 hurricane, with winds gusting at over 110 mph and drenching rainfall.

CNN surveyed funeral homes after the storm and tallied 499 hurricane-related deaths. The New York Times compared official death records from September and October of 2017 and identified more than 1,000 excess deaths, compared with the average for 2015 and 2016. A researcher at Penn State University and a colleague also used death certificates to come up with a similar estimate.

The government of Puerto Rico commissioned researchers from George Washington University’s Milken Institute School of Public Health to estimate excess deaths. Results of that study have been delayed and are due out this summer.

“Our approach is complementary to that and it provides a different kind of estimate and a different kind of insight into the impact of the hurricane,” says Caroline Buckee, a lead author of the new study and epidemiologist at the Harvard T.H. Chan School of Public Health. The researchers suggested that the government in Puerto Rico could use its methods in an even larger survey to reduce the large uncertainties in their findings.

The Harvard study covers a greater time period than The New York Times’ calculation and that could partly account for the much higher figure.

The household survey is a widely accepted technique for estimating casualties following a disaster. The technique can be misleading if the sample isn’t truly random or if some households have been wiped out altogether and are therefore missing from the survey – in which case the result would underestimate the true toll. In fact, the Harvard team says its results are “likely to be an underestimate” because of this bias.

The survey looked at deaths through the end of 2017, but the scientists suspect that the excess deaths continued into this year. “We saw consistent, high rates, in September, October, November, December,” says Rafael Irizarry, a biostatistician on the research team. “There’s no reason to think that on January 1 this trend stops.”

“Hurricane Maria caused massive infrastructural damage to Puerto Rico,” the Harvard team writes in its study. “In our survey, interruption of medical care was the primary cause of sustained high mortality rates in the months following the hurricane,” the wrote. Hospitals and doctors struggled to provide care, and many people simply had trouble getting to the doctor or the hospital to seek medical care. The survey finds that one-third of the total deaths in the months following the were caused by delayed or interrupted health care.

Understanding the true number is important for many reasons. “There are ramifications not only for families, not only for closure, but also financial ramifications,” such as for aid and preparedness, says Dr. Satchit Balsari, one of the lead investigators, who is a physician at the Harvard FXB Center for Health and Human Rights.