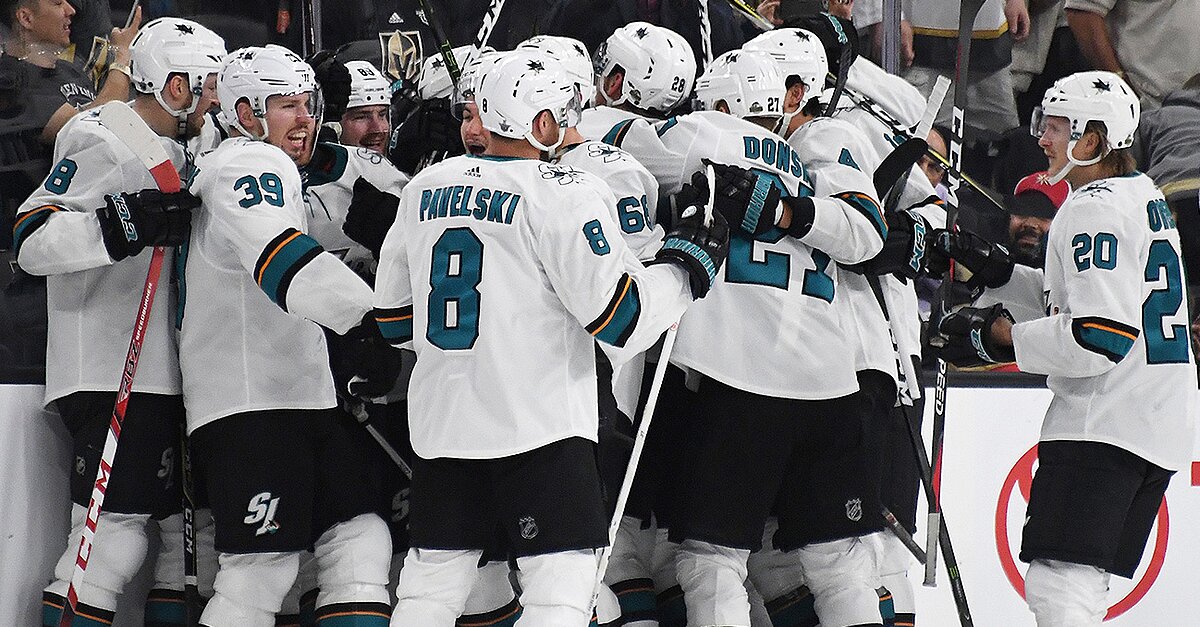 Heavy hitting. Good goaltending. Many matching minors. One-timers, open ice and overtime. Game 2 between Vegas and San Jose had a bit of everything, but most importantly it featured a critical bounce-back effort from a Sharks team that was run out of T-Mobile Arena early in Game 1. Even without the suspended Evander Kane, the rest of San Jose’s stars stepped up to deliver a 4–3 victory for the visitors, finally becoming the first team to vanquish Vegas in these playoffs.

In Game 2, Vegas was the first team to break through. On the second four-on-four of the first period, William Karlsson went to work on the forecheck, setting up Colin Miller at the right point. Miller teed up a slapshot intentionally wide off the boards behind the cage, and it bounced precisely to Karlsson right at the goal line extended, who finished off a tough angle shot past Martin Jones.

The man they call Wild Bill didn’t take long to find the score sheet again. Just 40 seconds into period two, Reilly Smith hounded San Jose’s Marc-Edouard Vlasic on the half-wall, forcing a turnover that fell right into Karlsson’s lap. As Smith crashed the net, Karlsson stepped up to the right circle and fired a wrister that trickled between Jones’s glove and left pad for a 2–0 Vegas lead.

The Sharks, like the Kings before them, had struggled to solve Vegas goalie Marc-Andre Fleury, but once they were given an opportunity, they converted. Exactly two minutes into the period, just seconds after David Perron was penalized for holding the stick, Brent Burns unleashed a slapshot from the right point that banked off a sliding Pierre-Edouard Bellemare and through Fleury. Later in the frame, on yet another 4-on-4, Fleury elected to not freeze the puck on a Dylan DeMelo dump in, and the Sharks persevered. Tomas Hertl dug out the puck on a cycle and fed Logan Couture between the dots for a one-timer over Fleury’s glove to level the score.

San Jose scored just one goal from 4-on-4 play all season. It scored twice in that situation in the second period of Game 2 alone. Off another Joe Pavelski faceoff win, Burns powered down the flank and wrapped around to Fleury’s right post, tucking in his second of the game. The score remained locked at 3–2 for nearly 20 more minutes before the Golden Knights equalized through a one-time blast from Nate Schmidt, sending Game 2 to overtime.

Each team had chances galore in the extra session, but the Golden Knights thought they had sent their fans home happy when Jonathan Marchessault slid a rebound into a yawning cage. But the reason the net was so open was because Marchessault clipped Jones’s right arm as the forward made his way to the front of the net. The goal was waved off, and we played on into a second overtime, where mistakes finally caught up with the home side. Vegas killed off one penalty, but not long after was shorthanded again after a hooking call on Jon Merrill, setting up the Sharks’ seventh man-advantage opportunity. From there, it didn’t take San Jose long: Hertl won another faceoff to Burns on the left point. Burns set up Kevin Labanc at the left point, and he slid it across for Couture, who placed a snapshot past the outstretched blocker of Fleury to lift the Sharks to a 4–3 win in double overtime.

It’s a matchup of division foes who were separated by a single standings point and were the two best teams in the Eastern Conference for almost the entire season. It’s a matchup that features two former Norris Trophy winners, a Vezina winner and a Vezina finalist and two of the best top lines in the game. In Game 1 of this matchup between Boston and Tampa Bay, the Bruins’ top line showed up in a big way, while the Lightning were bottled up in a 6–2 Bruins win.

Game 1 was as good as expected early. Both goaltenders were sharp off the opening drop: Tuukka Rask made 11 saves in the period, including a sliding save to right side to stop Steven Stamkos, while Andrei Vasilevskiy made 12, featuring a left-shoulder save on a speeding David Pastrnak.

The Bruins finally broke through late in the frame. With Ryan Callahan in the box for tripping, Patrice Bergeron set up Pastrnak just inside the blue line, and the young sniper took a long-range wrister that Rick Nash—separating from former teammate Ryan McDonagh in front of the net—reached down to redirect through Vasilevskiy’s legs for a 1–0 lead.

It didn’t take long for the lead to become two. Just 42 seconds into the second, the Bruins won a center-ice faceoff and went to work. Brad Marchand slid the puck into the right wing corner where Pastrnak picked it up and drove to the cage. Faking a shot to the left post, he instead passed it across the net mouth for a Bergeron one-timer over the glove of the goaltender.

Tampa responded quickly, with Cedric Paquette doing all the work on the forecheck to set up a long right-point wrister from Dan Girardi that deflected off Tim Schaller and over Rask’s right arm. That’s when things got crazy. Marchand appeared to have scored on a one-timer, but the goal was waved off due to a Pastrnak cross-check. Rask was strong to help the Bruins kill it off, and his offense quickly capitalized with a killer Rick Nash wrister that went off the right post and in.

And that wasn’t even the crazy part. With the Bruins back on the kill later on in the period, Rask made a kick save to stop a midrange Yanni Gourde shot, but in the process, his left skate blade popped off and plopped in the blue paint. Rask fervently tried to get the official’s attention but play continued; Rask didn’t try terribly hard to get back in the play, and Mikhail Sergachev beat him with a long shot from the point. Incensed, Rask, who is not really a stranger to on-ice tantrums, chucked the free blade at the side wall in disgust.

It wouldn’t have been a surprise if Boston fell apart after that sequence of events, which, while certainly crazy and undeniably unusual, was called correctly on the ice. Accordingly, the Bruins’ offense went silent for the final five minutes of the second period and first four of the third, but the Lightning couldn’t capitalize. Instead, 3:32 into the final frame, Tampa failed to clear, and Charlie McAvoy found Marchand at the far post with a slap pass. Marchand did very well to redirect the pass around Vasilevskiy’s right skate and in.

Soon after, that top line was at it again. Just past the halfway mark of the period, Pastrnak gained entry and somehow found Marchand coming behind him inside the line. Marchand held onto the puck as he traversed the circles, somehow keeping it away from Ondrej Palat before feeding Bergeron in the slot for another one-time goal. Later on, with Jake DeBrusk in the box but with his team failing to materialize any offense, Lightning coach Jon Cooper pulled his goaltender with more than six minutes to go to set up a 6-on-4 scenario for about 25 seconds. It didn’t work, and DeBrusk, fresh out of the box, scored into the empty cage to cap off a gritty effort from him and seal a 6–2 Game 1 win for Boston.

What else could it be? “Bladegate” is the latest Boston sports controversy after Tuukka Rask’s left skate blade literally popped off after a shot from Yanni Gourde. Mikhail Sergachev would eventually score as Rask was more focused on alerting the officials to his situation than stopping the puck.

“These freakin’ skates nowadays!” a half-smiling Rask said to NBC’s Brian Boucher after the game. While it’s safe to say his mood would’ve been a little different had his team lost, it must also be said he more than did his part to ensure his team did not lose, stopping 34 out of 36 Tampa shots.

1. Brent Burns, SJ: After recording just one shot on cage and finishing -2 in Game 1, Burns turned in an excellent Game 2 to spearhead his team’s bounce-back win. How’s two goals, six shots, five hits, two blocks and the secondary assist on the game-winner sound?

2. Patrice Bergeron, BOS: In truth, all three members of Boston’s top line deserve to be on this list, as the terrifying trio teamed up for another terrific outing. Bergeron had two goals and a helper, Brad Marchand had a goal and three assists and David Pastrnak turned in the first four-assist game of his bright young career.

3. Logan Couture, SJ: Score two goals, including the game-winner in double overtime, and you end up on this list. That’s just how this works. Couture also fired off a game-high seven shots, and recorded four hits and two takeaways after he too finished at -2 in Game 1.

Ah yes, Pens-Caps. The rivalry renewed. The previous iterations have had endings that were somewhat predictable, but that doesn’t mean the journey to those endings hasn’t been entertaining. Case in point: almost as soon as Washington’s Alex Ovechkin scored to put his team up 2–0 in Game 1, Pittsburgh rattled off three goals in under five minutes to take a lead it would not give up. Jake Guentzel had a three-point night, while Sidney Crosby, Patric Hornqvist and Ovechkin all had a goal and an assist. This series should be a good one.

Jets-Preds Game 1 was the only contest on television on Friday night, and Winnipeg jumped on the chance to showcase that it may in fact be the team to beat in the West. There’s a whole lot of time (maybe six games’ worth?) left in this series, but the Jets were by far the better team in a 4–1 Game 1 win in Nashville. One game excluded, Connor Hellebuyck had little trouble with a hapless Wild offense, and he shut down a much better Nashville attack on Friday too, stopping all but one of the Preds’ 45 shots on net; Pekka Rinne, meanwhile, didn’t finish the game. Mark Scheifele had a pair of goals and Blake Wheeler had two helpers to key the Winnipeg offense, which continues to impress and get contributions from throughout the lineup.