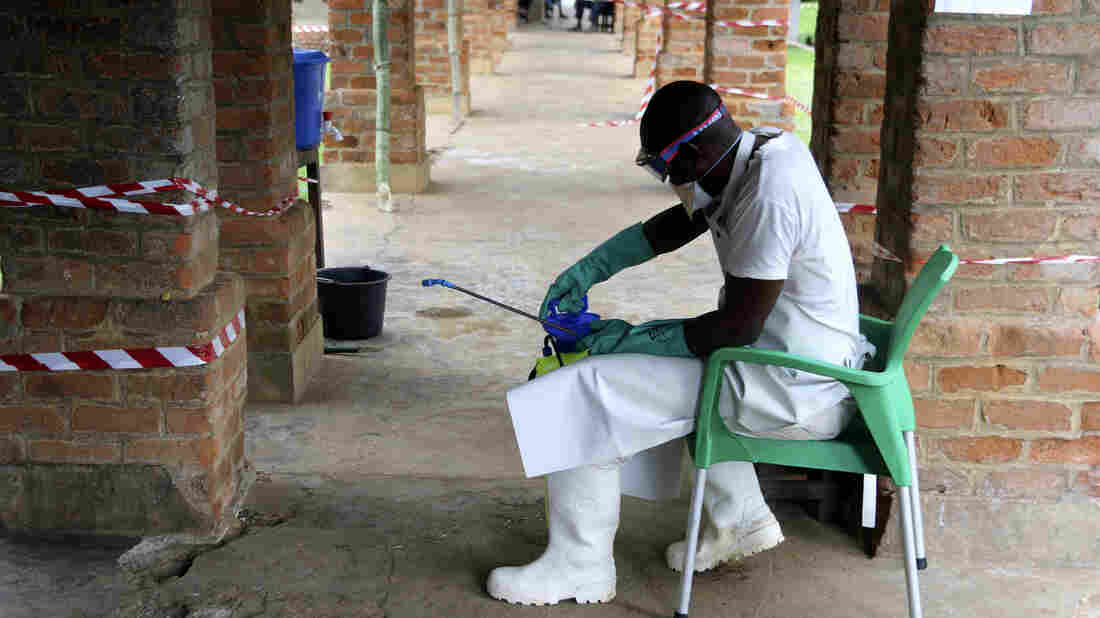 A health care worker wears virus protective gear at an Ebola treatment center in Bikoro, Democratic Republic of the Congo. The country’s latest outbreak has spread to a city of more than 1 million people. John Bompengo/AP hide caption A health care worker wears virus protective gear at an Ebola treatment center in Bikoro, Democratic Republic of the Congo. The country’s latest outbreak has spread to a city of more than 1 million people.

A new case of Ebola has emerged in an urban area of Democratic Republic of the Congo, a troubling development in the country’s new outbreak of the contagious and often fatal virus. Until now, the outbreak had affected a rural area.

Dr. Oly Ilunga, Congo’s Minister of Health announced Wednesday that a suspected case was confirmed in Mbandaka, a city of around 1.2 million people, and the capital of the Équateur Province.

“We are moving to a new phase of the epidemic,” Ilunga says.

Mbandaka is located less than 100 miles away from the rural area of Bikoro, where an outbreak was announced last week, and where, until now, all of the cases had been limited.

As of Wednesday, a total of 44 Ebola cases have been reported in this latest outbreak, including 23 deaths. Three cases have been confirmed, while 20 are probable and 21 are suspected.

The Congolese government says it is providing free health care in all of the affected health zones.

And Ministry of Health officials say epidemiologists are working to identify those who may have come in contact with suspected cases, while workers are monitoring people’s movement along regional water and land routes.

Mbandaka is located by the banks of the Congo River and serves as a vital travel hub.

WHO is deploying around 30 Ebola experts to the outbreak zone and says they will work with locals “to engage with communities on prevention and treatment and the reporting of new cases.”

Most Ebola cases are spread through person-to-person transmission, according to the WHO. People can become infected with bodily fluids or secretions — like blood, stool, saliva or semen — if they enter the body through broken skin or a mucous membrane. As a result, health workers and family members of infected people are at higher risk of infection.

But an experimental Ebola vaccine — two years in the making — is providing some hope in the fight against the disease.

As NPR’s Nurith Aizenman has reported, the vaccine proved enormously effective during a large-scale trial in Guinea during the waning months of a recent massive Ebola outbreak in West Africa. And now global health experts are rushing to get the vaccine into Congo.

The Ministry of Health says it received 5,400 doses on Wednesday. Health care workers and others who have been in contact with infected people will be targeted first.

There have been numerous outbreaks of Ebola in recent decades, including in Congo. But they have mainly been small-scale events in remote areas.

The Ebola outbreak declared in West Africa in 2014, departed from that pattern, with the disease spreading from rural areas to densely populated towns and cities, fueling the largest epidemic in history.

Now the emergence of a case in Congo’s Mbandaka city has officials anxious to avoid a similar escalation.

WHO Deputy Director-General for Emergency Preparedness and Response Peter Salama tweeted that the virus’s introduction to an urban area is a “game changer.”

“The challenge just got much much tougher,” he writes.