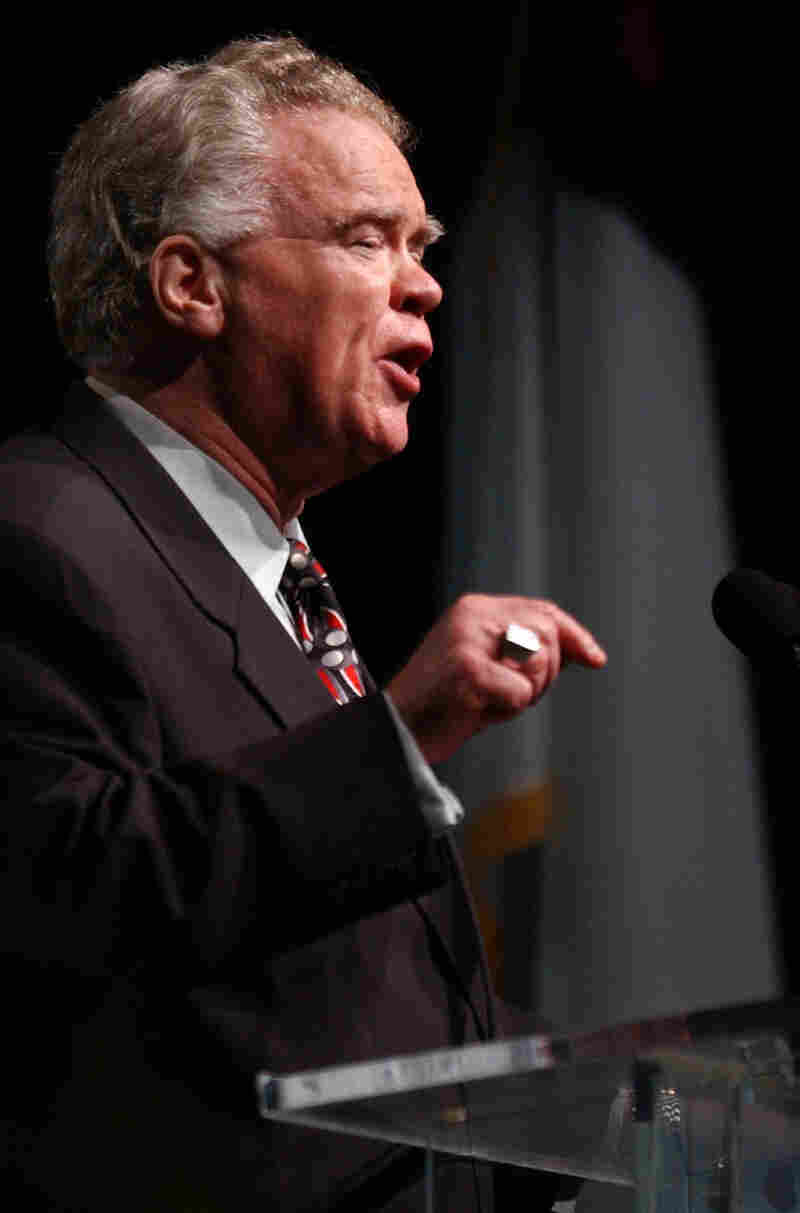 Paige Patterson, president of the Southwest Baptist Theological Seminary in Fort Worth, Texas, urges members of the Southern Baptist Convention to withdraw from the Baptist World Alliance at the convention’s annual meeting in Indianapolis in 2004. Tom Strickland /AP hide caption 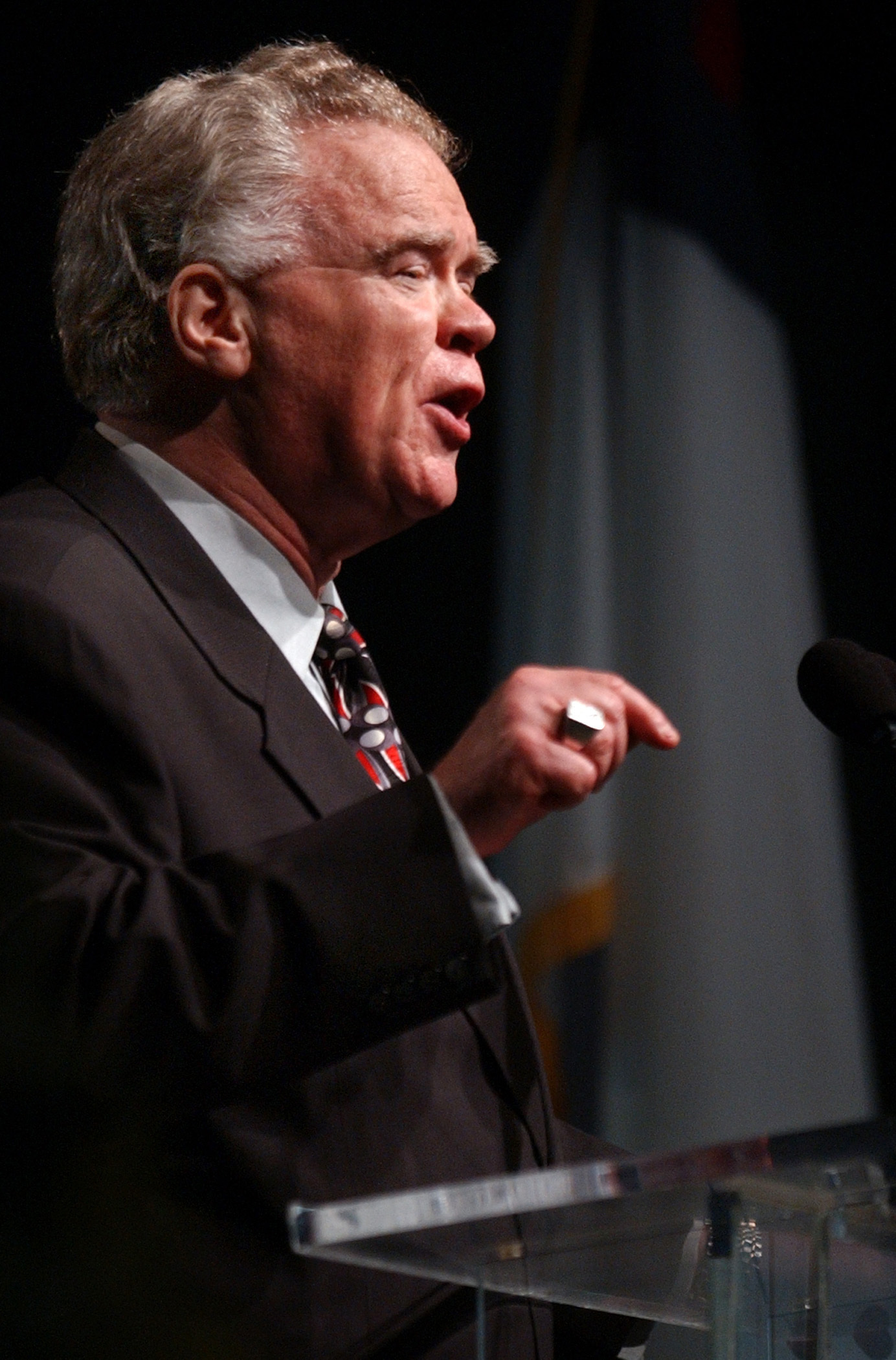 Paige Patterson, president of the Southwest Baptist Theological Seminary in Fort Worth, Texas, urges members of the Southern Baptist Convention to withdraw from the Baptist World Alliance at the convention’s annual meeting in Indianapolis in 2004.

A prominent Southern Baptist leader faces demands for his dismissal after women from his own denomination reacted angrily to the news that he once advised abused women to pray for their husbands and gave a sermon in which he defended a lewd remark about a teenage girl as “biblical.”

Paige Patterson, president of the Southwestern Baptist Theological Seminary, has denied having condoned marital abuse. He has so far declined to apologize for his past comments, and is still scheduled to speak at an upcoming Southern Baptist Convention meeting in Dallas.

The controversy centers in part on how Southern Baptists should interpret their commitment to “complementarianism,” a doctrine which holds that the Bible assigns different but complementary roles to men and women.

More than 2,000 Southern Baptist women have signed an open letter saying they are “shocked” by Patterson’s comments on divorce and sexuality and warning Southern Baptist Convention leaders not to allow “the biblical view of leadership to be misused in such a way that a leader with an unbiblical view of authority, womanhood, and sexuality be allowed to continue in leadership.”

The uproar was prompted by the release about 10 days ago of the recording of an interview Patterson gave in 2000 in which he counseled women who have been physically abused by their husbands to pray for them. In that interview, Patterson recounted how he had given that advice to one woman who had been repeatedly assaulted by her husband.

“I said, ‘Yes, ma’am, I am happy,'” Patterson quoted himself as telling the woman. “What she didn’t know when we sat in church that morning,” he said, “was that her husband had come in and was standing in back, first time he ever came.”

Patterson has also come under fire for a sermon he gave in 2014 about how God created women “beautifully and artistically.” He related a conversation he had with a woman while her son and a friend were standing alongside. As they talked, a teenage girl whom Patterson described as “very attractive” walked by, and one of the boys said, “Man, is she built.”

The woman immediately scolded him, but Patterson said he interjected in the boy’s defense.

“I said, ‘Ma’am, leave him alone,'” Patterson recounted. “‘He’s just being biblical. That is exactly what the Bible says.'”

Hearing Patterson tell that story, Karen Sparrow Prior was outraged.

“Regardless of one’s view of how pastors should counsel woman who are being abused,” Prior says, “we should be uniform in denouncing any sexualization of a child.”

Prior, a professor of English at Liberty University in Lynchburg, Va., and about 30 other women immediately drafted the letter objecting to Patterson’s remarks, addressing it to the Board of Trustees of Patterson’s seminary.

“The future of the Southern Baptist Convention is at stake,” Prior says. “As the world, as our country and our churches grow more diverse and the old guard of white male leadership fades away, we need to have people who will keep alive the doctrines and beliefs that people like myself believe in.”

“[Patterson] needs to step down, or other men need to step in and recognize the inappropriateness of this kind of leadership,” she says.

Within 24 hours of the letter’s release, 2,100 Southern Baptist women had signed it, identifying the churches to which they belonged.

“I passed it on to women in my church,” says Krissie Inserra, whose husband is the pastor of a Southern Baptist church in Tallahassee, Fla.

“I am proud to be a Southern Baptist,” she says. “I think we do a lot of really great things. However, I am ashamed to be associated with this type of behavior, and I think a lot of women — and men — feel the same way. We cannot let this stand.”

The controversy over Patterson’s remarks has put a spotlight on the denomination’s teachings about men’s and women’s distinctive roles in church and at home and the Southern Baptist beliefs that women should follow biblical directions to “submit” to their husbands and that men should hold the key leadership positions in the church.

Some prominent Southern Baptist women say male church leaders cite such teachings to justify their mistreatment of women. Beth Moore, a popular evangelical author, last week wrote a lengthy and angry blog post last week describing “attitudes of some key Christian leaders that smacked of misogyny, objectification and astonishing disesteem of women.” She said she had encountered “one of the most demoralizing realizations of my adult life: Scripture was not the reason for the colossal disregard and disrespect of women among many of these men. It was only the excuse. Sin was the reason.”

Among those who responded to Moore’s post was Denny Burk, president of the Council on Biblical Manhood and Womanhood, an evangelical organization that promotes the philosophy of complementarianism.

“I grieve to read Moore’s description of her experiences, but I am grateful that she shared them,” Burk wrote. “Men, we have got to get better.”

The letter from the Southern Baptist women does not challenge the teaching of complementarianism, and proponents of the principle argue that the failings of male Christian leaders should not discredit the teaching.

“In its essence, complementarianism simply affirms the fact that God created both men and women equally in his image and each with its respective role,” says Albert Mohler, president of the Southern Baptist Theological Seminary. While Mohler takes no position on how Southern Baptist Convention leaders should handle the Paige Patterson controversy, he concedes that “even essential truths can be misused.”

“There is no excuse for any kind of harmful statement, demonstration of sexism, or condescension from any man to any woman, and particularly from any man who has spiritual responsibility,” Mohler says. “Many men act very badly, and men who act badly claiming the mantle of complementarianism can be some of the most dangerous.”