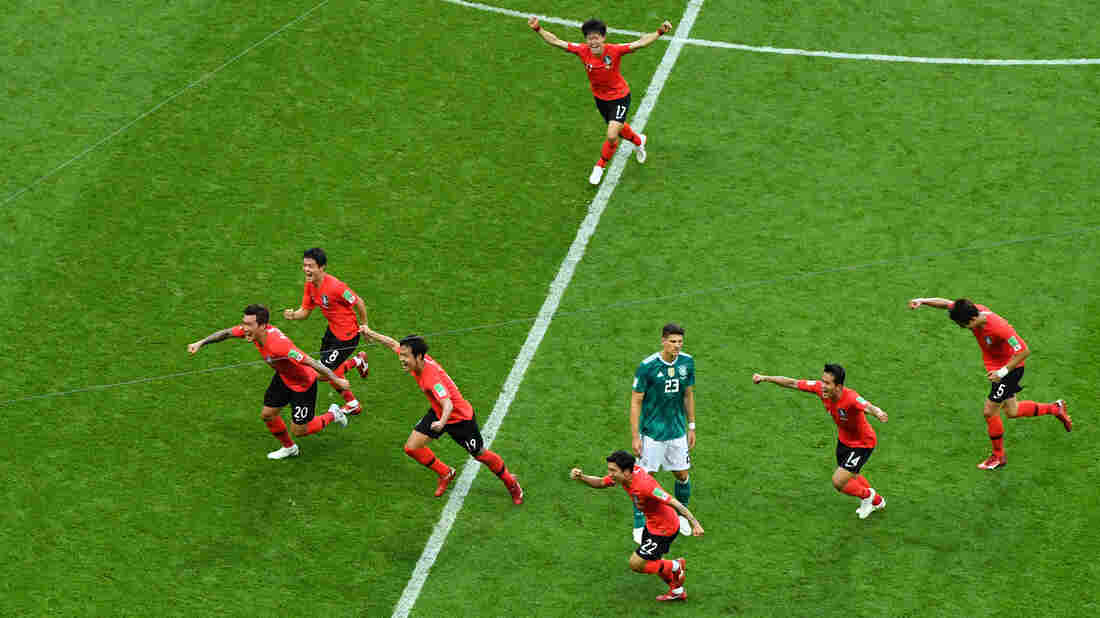 South Korean players celebrate during their World Cup upset win over Germany in Kazan, Russia, in which they scored twice late to shock the defending champs. Dylan Martinez/Reuters hide caption 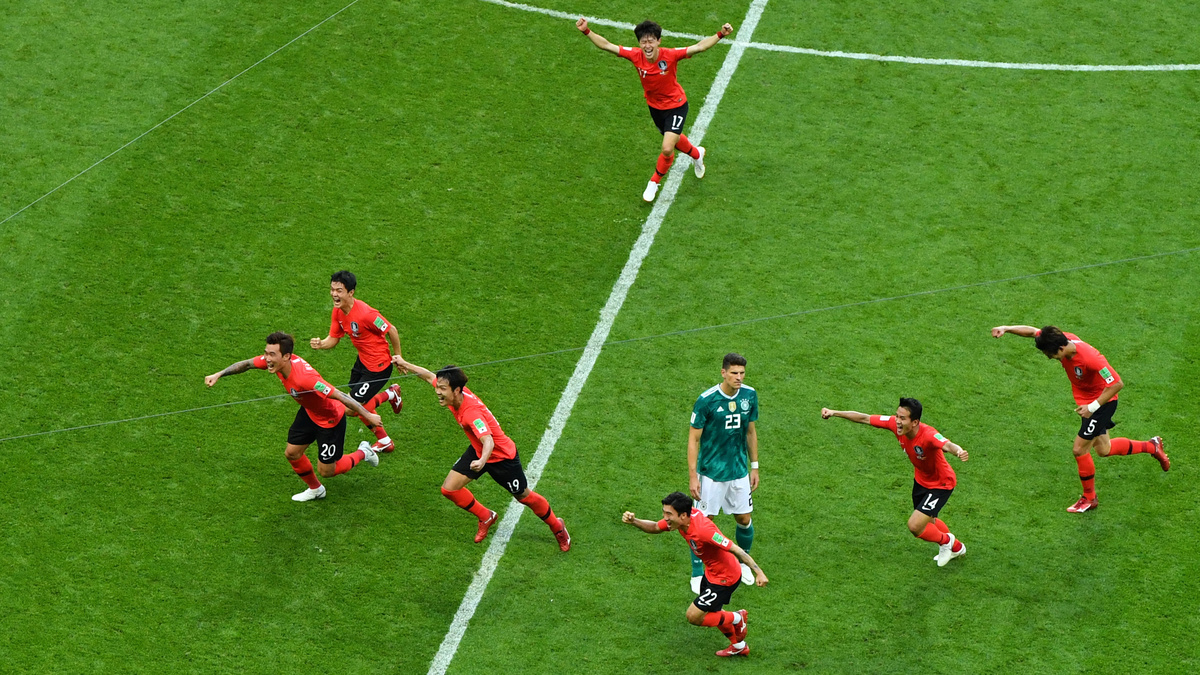 South Korean players celebrate during their World Cup upset win over Germany in Kazan, Russia, in which they scored twice late to shock the defending champs.

In a shocking upset, South Korea has beaten Germany in the World Cup, denying the defending champions a chance to advance beyond the first round.

It’s the first time in at least 80 years that Germany has failed to advance out of the World Cup’s group stage. It was a stunning result, both for the team that had come to Russia as the world’s No. 1 and for South Korea, which wasn’t listed in the top 50 when this tournament began.

For more than 90 minutes, the score at Kazan Arena was 0-0 — a tantalizing opportunity for the Taeguk Warriors to seize an upset and, for German fans, a nausea-inducing dance with fate.

The match had a number of replay reviews and other delays — as official time expired, officials added nine minutes of stoppage time. And that’s when Kim Young-gwon found himself standing in front of the net, with the ball at his feet. He chipped it point-blank over a sprawling Manuel Neuer to make it 1-0 — even as arguments ensued over whether he was offside (officials determined he wasn’t).

Desperate to win and keep its slim chance of advancing alive, Germany sent its goalkeeper roaming into the offensive end — and it was then that South Korea added a late goal to put the match out of reach, collecting a loose ball and shooting it downfield, where Son Heung-min sprinted to put it away for a 2-0 edge.

With Germany’s loss, Sweden and Mexico advance from Group F. Sweden beat Mexico 3-0 in their match, which was played concurrently with the South Korean shocker. To advance, South Korea would have needed Mexico to win.

The loss defines what has been a disastrous World Cup for Germany, a historically fearsome team that suddenly found itself unable to score goals in Russia. Their bad luck continued today, as Mats Hummels was unable to put away a free header from six yards out late in the match.

After the match was whistled over, German players looked to be in disbelief; many simply stood or sat on the turf and looked off into the distant horizon — one that which, astoundingly, no longer includes Die Mannschaft reaching the knockout round of the World Cup.

Germany lost on Wednesday despite dominating in possession — 69 percent to 31 percent — and leading South Korea in shots on goal.

The South Koreans were hit with 16 fouls and four yellow cards, as they fought to find a way to do what many in the sporting world believed was impossible. In the end, they pulled it off thanks to taking advantage when they could — and to goalkeeper Cho Hyun Woo, whose seven saves earned him Man of the Match honors.