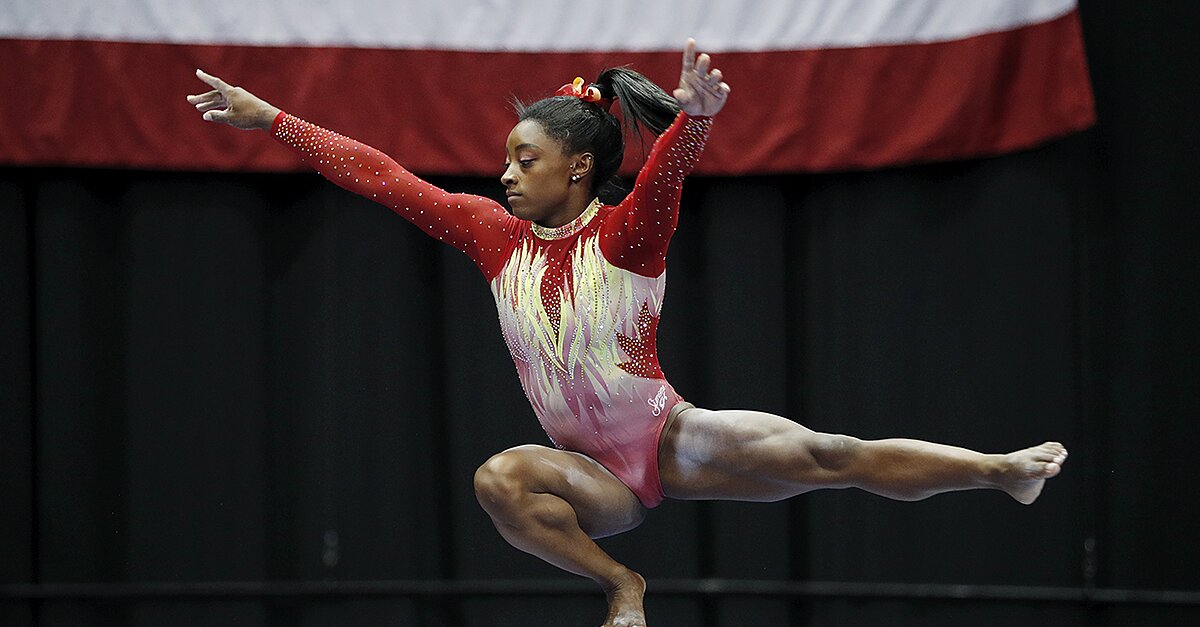 Simone Biles entered the final rotation Saturday at the 2018 GK U.S. Classic trailing Riley McCusker by four-tenths of a point. Biles was back on the competition floor almost two years after winning five medals at the 2016 Olympic Games, four of them gold.  There were some nerves from the defending Olympic all-around champion—an overrotated opening tumbling pass on floor exercise, a slightly uncontrolled landing on vault and fall on the uneven bars.

McCusker opened the final rotation on floor exercise where she posted a 13.600. Biles headed to balance beam where she needed a 14.0 to regain the lead.

She made her difficult routine look effortless to earn a 15.2 and the title. McCusker finished second while reigning world champion Morgan Hurd rallied after an earlier mistake to take third.

Biles’s all-around score of 58.700 is the top score in the quadrennial thus far and she also has top scores on vault (15.4), floor (14.75) and beam.  It’s only her first competition back and she had mistakes as well.  There is another two years before the 2020 Olympics in Tokyo and plenty of time for Biles to just keep getting better.

Biles made her return to competition earlier in the Olympic cycle than Final Five teammates Aly Raisman and Gabby Douglas did ahead of the 2016 Games. Both Raisman and Douglas were back on the competition floor in March 2015 at the City of Jesolo Trophy meet, about 18 months before the Rio Olympics.

Biles is back with enough time to compete in three national championships and two world championships. She already has 14 world medals including three all-around crowns. The only events where she does not have a world title are vault and uneven bars.

The scoring system might have changed following the 2016 Olympics, but Biles’s difficulty hasn’t, at least not much. Gymnasts lost a half a point off their start value on each event after the latest Code of Points change for a total of two points lower.

The difficulty for Biles’s program in Columbus? A 25.0. (For reference, the top total difficulty at last year’s world championships in Montreal was 23.3 points from Mai Murakami of Japan.)

Her difficulty gives her a significant advantage that, coupled with her excellent execution, can boost her well ahead of her competition and, as seen in Columbus, can help her overcome a major break.

Biles upgraded her floor routine and debuted two new tumbling passes at the U.S. Classic including a double-twisting double layout to open her routine, a pass that is incredibly difficult and that Biles bounced back out of after having too much power.

Her third pass is also new—to fulfill a requirement she added a front full and connects it through to a full-twisting double tuck. She changed her vault as well, opting for a Cheng—a half turn onto the vault table with one and a half twists off. It is the more difficult of the two vaults that Biles competed in Rio.

Uneven bars is where Biles has made the most changes, most notably on her dismount. After completing a full-twisting double tuck in 2016, she’s added a second twist. While uneven bars didn’t go Biles’s way in competition, she put together fluid sets during podium training. When she does hit, the difficulty score will raise just a little bit more.

It’s also the only event where Biles has not competed in an event final at a world championship or Olympic Games. The top two Americans on uneven bars over the last four years were Madison Kocian and Ashton Locklear. Kocian, who won a silver medal on bars in Rio, is not competing this season. Locklear, who is Biles’s training partner, is out after having shoulder and knee surgeries this year.