Lazio midfielder Sergej Milinkovic-Savic looks to have received a boost as he looks to secure a move to Serie A champions Juventus this summer.

According to a report from Tuttosport (via Calciomercato), influential super agent Jorge Mendes could help the Serbian secure a transfer to Turin.

Milinkovic-Savic played in all three of Serbia’s games at the World Cup in Russia this summer, although he was unable to help his side progress to the last 16 of the competition.

The 23-year-old is a man in high demand, having been linked with moves to Manchester United, Real Madrid and Juventus this summer.

Lazio are said to value their star midfielder at over €100m, a price tag that Juventus seem unlikely to pay, although Mendes could be key to getting talks underway and helping to reduce the potential fee.

Mendes recently secured his client, Joao Cancelo, a move to Juventus and is understood to be close to those who represent Milinkovic-Savic.

Portuguese agent Mendes is a highly influential figure in European football, counting the likes of Cristiano Ronaldo, James Rodriguez among his list of clients.

Meanwhile, Milinkovic-Savic recently hinted at a potential move to Liverpool this summer. However, it is a move that seems unlikely due to the signings that Jurgen Klopp has already made this summer.

The German manager has already built on the squad that finished runners up in the Champions League last season, by adding RB Leipzig’s Naby Keita and Monaco midfielder Fabinho to his central midfield department. 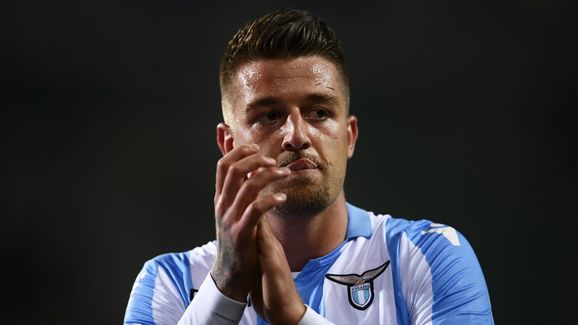 Despite this, a conflicting report has also quoted the 23-year-old as saying that he is ‘happy’ at Lazio and is yet to think about his future beyond this summer.