It was a game of two halves as Switzerland came out as a completely different team at half time to claw back a one goal deficit to get the win in a thriller of a game.

Serbia got off to the best possible start. Lone striker Aleksandar Mitrovic fired a powerful header beyond the helpless Yann Sommer in the Switzerland net.  The Newcastle forward made a driving run towards the left-hand post as he connected with Dusan Tadic’s cross to give his side the lead inside the first five minutes of the game.

Despite going down a goal so soon, Switzerland did not lie down and found most of their creative play down their left-hand side through left-back Ricardo Rodriguez, but were lacking the cutting edge.

Switzerland then had their best effort of the game despite not looking gifted of ideas. A neatly placed pass found Seferovic on the move and one-on-one lead to a great save from Serbia shot stopper Vladimir Stojkovic, one of the few moments in the first half where the Serbian defence appeared to switch off.

Towards half-time, Serbia should have been 2-0 up, Tadic with a fantastic delivery from a corner found Tosic in acres of space and somehow he stuffed up the resulting header which ended up well wide.

Serbia lead at the break and deservedly so. They were out of the traps very quickly and it was a case of trying to stop the ‘Mitro Show’ as the forward was ultimately the difference. The Swiss were lacking that front man. Heated discussions took place as they players trekked off between Xherdan Shaqiri and Mitrovic through an altercation that occurred during the half but made a truce as they went through the tunnel.

The Swiss went for a fresh pair of legs at half time as forward Haris Seferovic was hauled off after being fairly anonymous throughout the first period, Dinamo Zagreb striker Mario Gavranovic coming on.

A rousing team talk from coach Vladimir Petkovic may have kicked his players into life, and it only took his men seven minutes to get the equaliser. A deflected shot from Shaqiri fell beautifully for Granit Xhaka to run onto the loose ball and rifle the shot past Stojkovic to even the scores. Switzerland needed something special to break the deadlock, and they found it through the Arsenal midfielder. 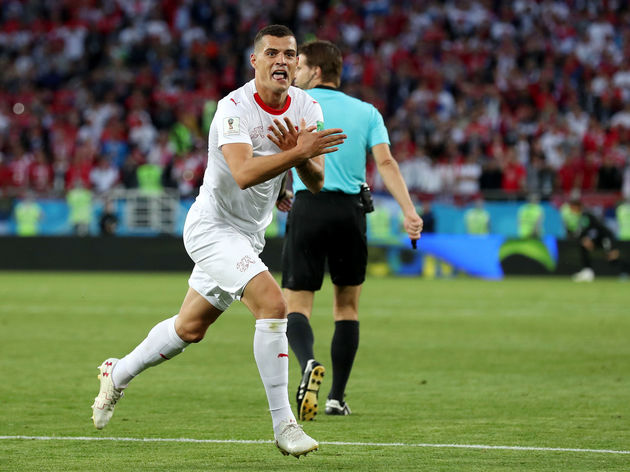 Shaqiri clipped the post with a shot as Switzerland pushed on for a winner, but it was Serbia who felt hard done by shortly afterwards when Alexsandar Mitrovic was given the Harry Kane treatment, held down by both Fabian Schar and Stephan Lichtsteiner in the box only for the referee to wave away his claims for a penalty.

The game really came to life as Switzerland’s Mario Gavranovic was played clean through, but he could only find the side-netting – his blushes spared thanks to the assistant’s upraised offside flag – ramping up the atmosphere up a few notches in the Kaliningrad Stadium.

Xhaka was playing a lot more freedom with a change of system, his through ball on the edge of Serbia’s penalty area found Steven Zubar but former Chelsea full-back Branislav Ivanovic knocked it away from his toes just in time.

But the best of the drama was saved until the 90th minute, when Serbian defender Dusko Tosic made a massive error – stepping up in his own half to leave Xherdan Shaqiri through on goal, the Stoke man racing through on goal and finishing calmly to give his side the winner to an epic encounter.