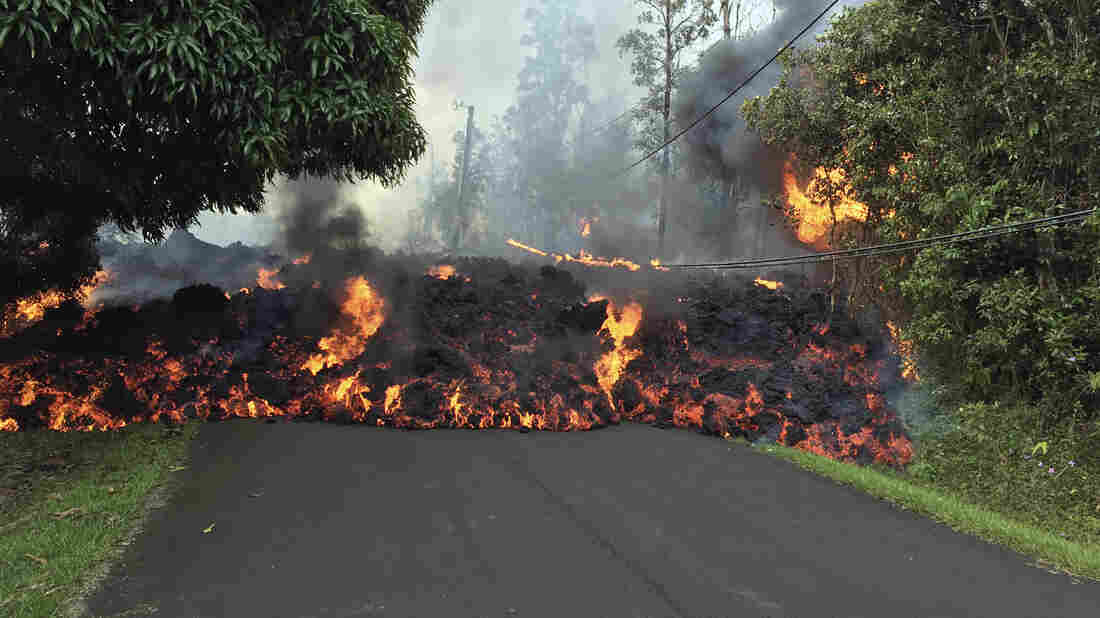 In this Sunday, May 6, 2018 photo provided by the U.S. Geological Survey, a lava flow moves across Makamae Street in the Leilani Estates subdivision near Pahoa on the island of Hawaii. Kilauea volcano has destroyed more than two dozen homes since it began spewing lava hundreds of feet into the air last week. (U.S. Geological Survey via AP) AP hide caption 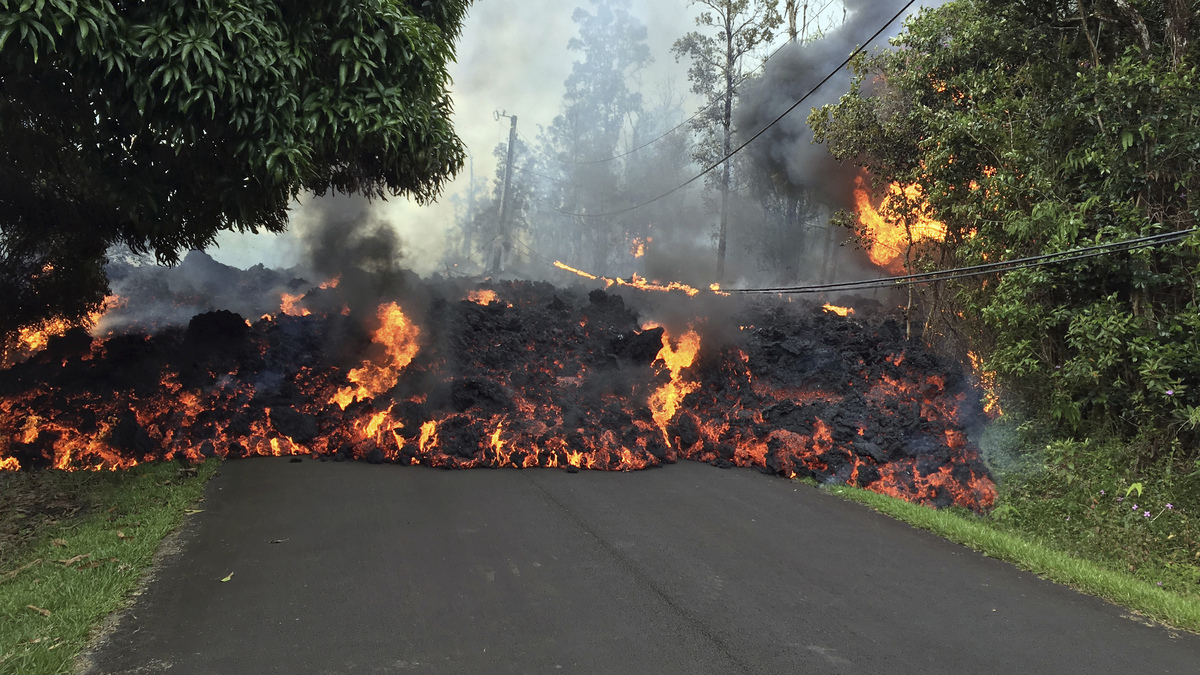 In this Sunday, May 6, 2018 photo provided by the U.S. Geological Survey, a lava flow moves across Makamae Street in the Leilani Estates subdivision near Pahoa on the island of Hawaii. Kilauea volcano has destroyed more than two dozen homes since it began spewing lava hundreds of feet into the air last week. (U.S. Geological Survey via AP)

New fissures have opened on Hawaii’s Big Island as earthquakes continue to rock the island, and scientists are warning about further volcanic eruptions.

Officials announced the island’s 17th fissure on Saturday evening, hours after a 16th fissure emerged, releasing lava that traveled 250 yards before settling. That fissure opened near the Puna Geothermal Venture plant, where officials have removed 60,000 gallons of flammable liquid as a precaution.

A shallow earthquake, with a magnitude of 3.5, also hit the island on Saturday.

Nearly 2,000 residents have been ordered to evacuate, and officials say they may force the evacuation of thousands more. Some residents, however, like Scott Wiggers, who lives in Leilani Estates, have refused to leave. Wiggers’ home is just 2 miles from one of the fissures.

“I woke up at about 1 a.m. I heard a roar — and this is 2 miles away — a roar, like a jet engine. I go out, and look out the window, and I see the sky glowing red. I’m seeing this fissure, right before my eyes, open up. A cinder cone being created, and lava spewing in the air, a hundred feet. Where I was standing, and I was standing about 50 yards from that, I could feel the warmth. It was probably 90 degrees Fahrenheit. Then I went down there again, after I got some of my buddies out of bed, and we were standing a little closer, and just the sound, the experience, the ground was shaking.”

The Big Island has nine zones. The volcano eruption has impacted Zone 1, and Zone 2 could also be effected. Officials are warning that further eruptions could spew rocks and boulders, and spread ash plumes 12 miles from the 4,000 foot high volcano summit. Reuters is reporting that respirators have sold out in some stores on the island. Wiggers, however, says he hasn’t bought one, and for now plans to stay in his home.

“No one is forcibly evacuated. That’s why I am still here,” he says. “They want to come and drag us out of our homes, however, they don’t support what we’re doing. I’m talking about civil defense. They don’t agree with what we’re doing.”

Since the volcano erupted on May 3, lava flows have destroyed 36 structures on the island, including 27 homes. In some parts of the island lava has piled as high as a four-story building.

Wiggers says, “Over the past 24 hours, the earthquakes have started rumbling again. … When I go out and check on some of the fissures, you can start to see where some of the sulphur deposits are building up, and where the lava rocks are starting to turn yellow.”

Last week, President Trump declared a federal emergency on the island, allowing federal assistance. Most of that aid will go toward repairing roads, water pipes, parks and schools. Reuters reports that officials continue to rescue dozens of pets, as well as horses and livestock.

The volcano’s eruptions are not new — the U.S. geological survey says the volcano has been erupting since 1983. In just the past two years, lava flows have added 443 acres to the island’s southeastern shore. In 1990, 80 feet of lava buried more than 100 homes.

Residents are preparing for further eruptions in the days ahead. Geologists say the lava lake in the volcano’s crater is dropping rapidly, and that could lead to a steam-driven explosion if the lava falls below the water table.