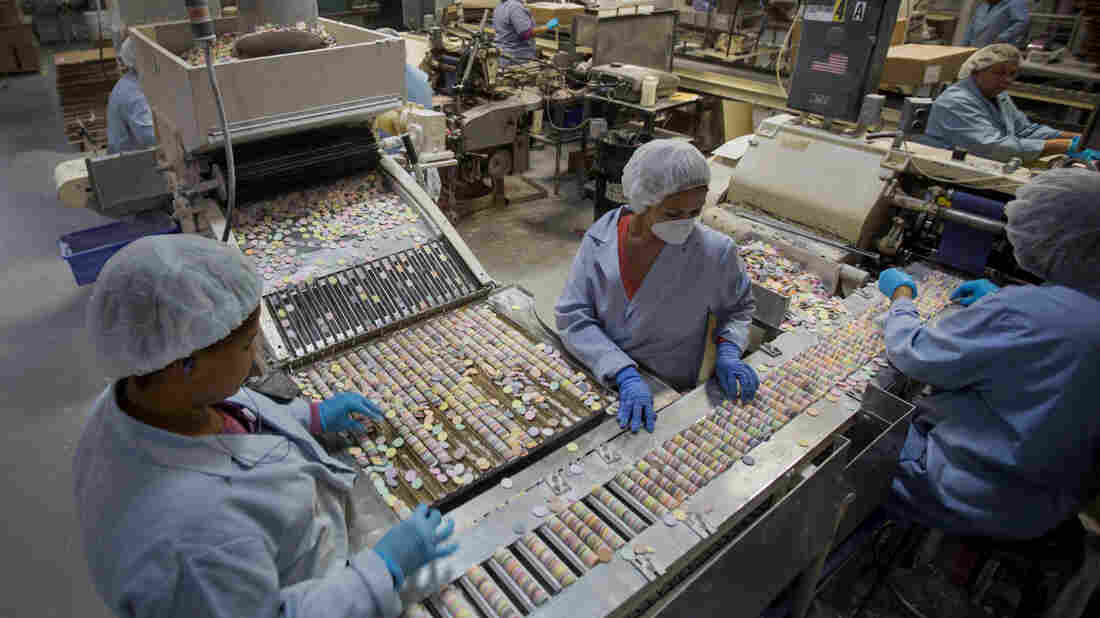 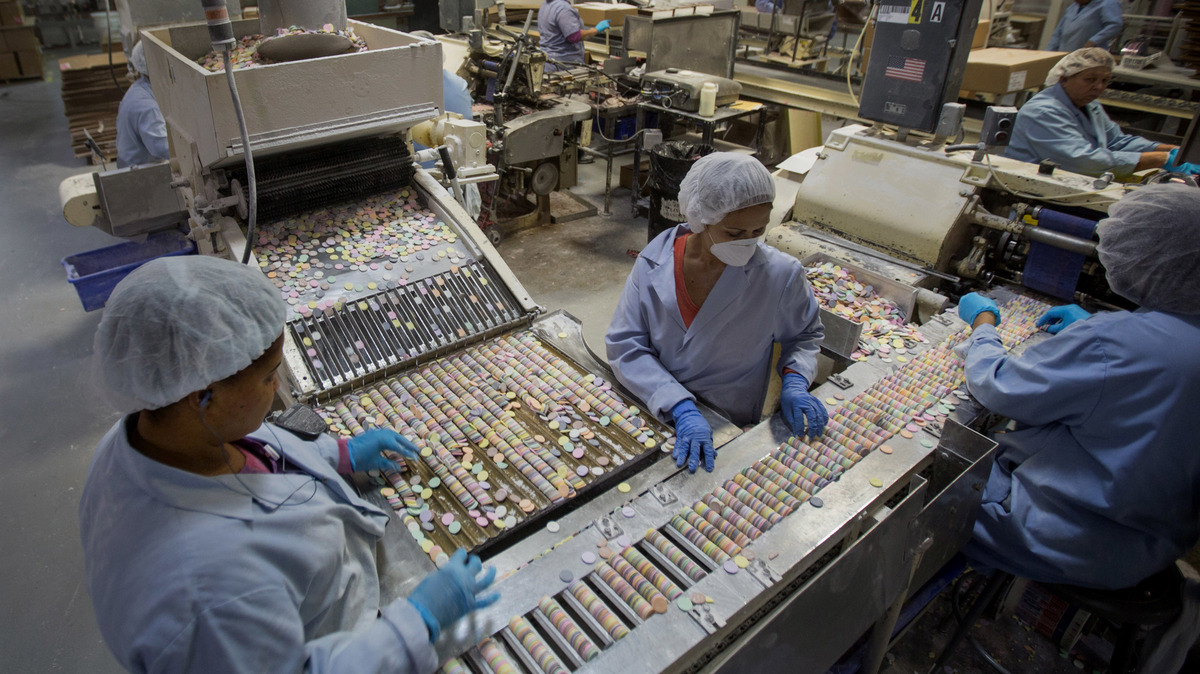 Workers sort NECCO Wafers at the New England Confectionery Co. in Revere, Mass. The Ohio-based Spangler Candy Company made the winning bid for NECCO, which filed for bankruptcy in early April.

And while the future of NECCO candy is still uncertain, the deal may keep the company’s products — which also include Mary Janes, the Sky Bar and Candy Buttons — on the shelves a little while longer.

That’s good news for fans of the 171-year-old Massachusetts candy maker, which traces its roots back to 1847, when Oliver Chase, an immigrant from England, invented a lozenge cutter (the first American candy machine, according to NECCO). He and his brother, Silas, then founded Chase and Co., which became the New England Confectionery Co. after a merger in 1901.

NECCO claims to be the country’s oldest continuously operating candy company. Civil War soldiers carried NECCO wafers. During WWII, the U.S. government bought them in bulk and shipped them off to soldiers, because the candy didn’t melt and was able to survive transport without breaking. In the 1930s, Richard Byrd, an American navy admiral and polar explorer, took more than two tons of NECCO wafers with him for his two-year expedition in Antarctica.

A candy company so entrenched in American history triggered somewhat of a panic when the news broke that it might close shop. As NPR reported in April, NECCO fans hoarded as much of the candy as they could, causing sales to spike.

“We’re selling a lot,” said Jon Prince, who runs the online retailer Candyfavorites.com, during the rush. One caller wanted to buy his whole inventory, but Prince was limiting sales. “And the person actually started to cry and they said they couldn’t imagine a world without their NECCO wafers,” Prince said.

And 23-year-old Katie Samuels offered a candy wholesaler her 2003 Honda Accord for its entire stock of NECCO, Morning Edition’s Noel King reported. The wholesaler declined, but Samuels got her candy anyway — by charging it to her credit card.

And though not everyone is a fan of the way the wafers taste — they are often described as having a chalky, antacid-like flavor — some people love them for other reasons.

As NPR reported last month, Spencer Ordway, who runs an overnight camp in Maine, said he stocked up because campers use the wafers as currency to play games and buy prizes at the end-of-summer carnival.

“I had so many alumni and current staff contacting me … saying, ‘What are we going to do? How can we save enough NECCO wafers to, uh, cover us for years to come?'” Ordway said.

Aside from the wafers, the company’s Sweethearts are a Valentine’s Day staple, bearing a selection of about 80 messages, from the classics “BE MINE” and “KISS ME” to more modern phrases, such as “EMAIL ME” and “CHILL OUT.”

The beleaguered candy maker, which will still operate out of Revere, Mass., for now, has recently faced other difficulties: In a letter dated May 15, the FDA detailed unsanitary conditions throughout the plant, saying that inspectors had found rodent droppings “too numerous to count” as well as dirty equipment and work spaces.

And layoffs of up to 400 people were expected if a buyer was not found.

The winning bidder, Spangler Candy Company, which was also founded by a pair of brothers, has been family owned and operated since 1906. Its current CEO, Kirkland B. Vashaw, is a fourth-generation family member.

Mike McGee, CEO of NECCO, told the Boston Herald, “We started as a family-owned candy company. We’re thrilled to work with a fourth-generation candy company that’s going to bring some new stewardship to our brand. We’ll work really hard to make sure we get a successful transition.”