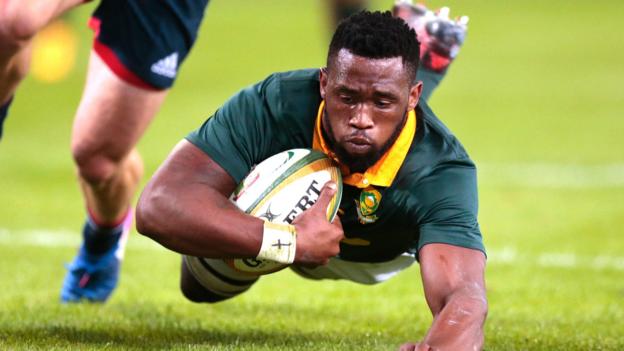 The 26-year-old – who has played 28 international Tests – replaces the injured Warren Whiteley as captain.

Pieter-Steph du Toit will captain the Springboks in Saturday’s match against Wales in Washington DC, USA.

“I believe both of them will do a good job as captains,” said head coach Rassie Eramus.

“It is a huge honour to captain the Springboks and Siya and Pieter-Steph are two honest, hard-working men who enjoy the respect of their fellow players.”

Kolisi, who skippers Super Rugby team Western Stormers, made his Test debut against Scotland in 2013.

Chiliboy Ralepelle became the first black player to skipper the South African national team when they faced a World XV in England in 2006, but the match did not have Test status.

Rugby in South Africa has struggled to shake off the belief it is a ‘white’ sport, after black people were barred from playing during apartheid.

South African Rugby and the government have agreed that 50% of the Springboks’ team at the 2019 Rugby World Cup in Japan should be black.

England’s tour of South Africa starts on 9 June at Ellis Park in Johannesburg.