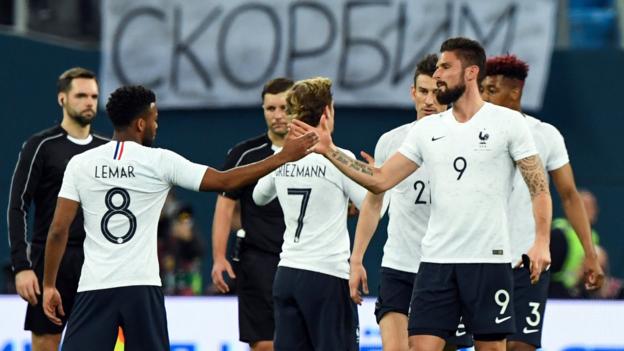 The Russian Football Union has been fined £22,000 for racist chants by fans in March’s friendly with France.

Paul Pogba, Ousmane Dembele and N’Golo Kante were said to be among those subjected to taunts in Les Bleus’ 3-1 win over the World Cup hosts.

The game was played at Krestovsky Stadium in St Petersburg, one of the host venues for this summer’s event.

“Fifa has a zero-tolerance approach to discrimination,” said a statement by the world governing body.

“Following a thorough investigation including the review of video evidence, after analysing all the specific circumstances of the case, in particular the gravity of the incident but also the limited number of fans involved, (Fifa has) decided that the Russian Football Union was liable for a breach of article 58.”

The issue was first reported by photographers from news agency Agence France-Presse (AFP), who said they heard chants when players went to take corners.

It is the latest in a number of incidents of discrimination linked to Russia.

Earlier in March, Russia coach Stanislav Cherchesov said: “I do not think we have racism on a scale that needs to be fought.”