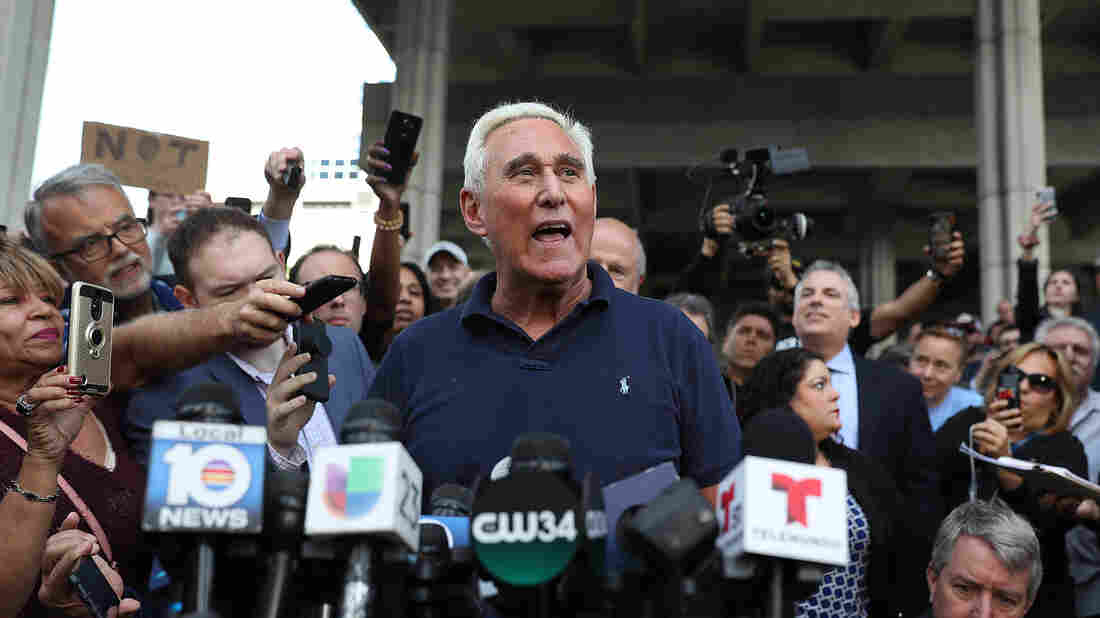 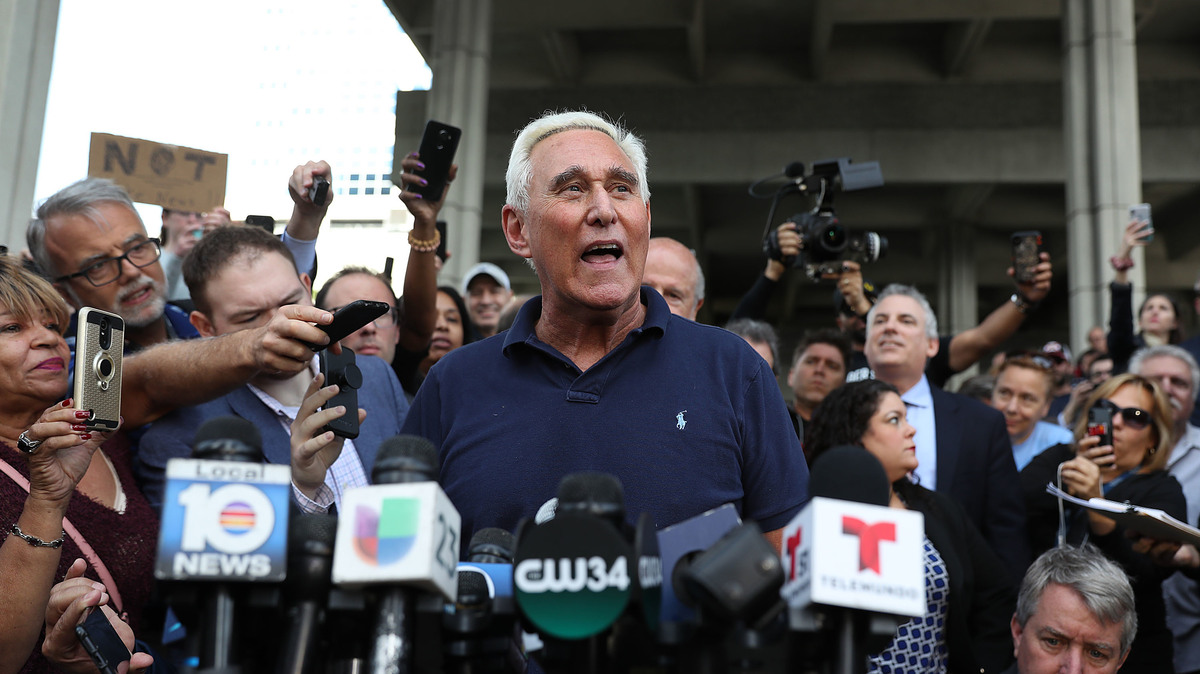 Roger Stone speaks to the media after leaving the federal courthouse Friday in Fort Lauderdale, Fla.

The Justice Department added another piece to the puzzle of its Russia investigation on Friday with charges against GOP political consultant Roger Stone — but the full picture still isn’t complete.

Stone was arrested in Florida following an indictment by a grand jury working with the office of special counsel Robert Mueller.

He denied breaking the law and said he’ll plead not guilty when he’s arraigned later in Washington, D.C.

Prosecutors say Stone and at least two of his associates served as intermediaries between Donald Trump’s 2016 presidential campaign and “Organization 1” — as WikiLeaks is referred to in the court document — which fenced material stolen by the Russian government as part of the Kremlin’s scheme to wreak havoc in the 2016 White House race.

After WikiLeaks released emails stolen from the Democratic National Committee in July 2016, “a senior Trump campaign official was directed to contact Stone” to ask what else WikiLeaks had planned.

Stone then pinged “Person 1” — conservative commentator Jerome Corsi — and instructed him to “get the pending … emails” from WikiLeaks founder Julian Assange.

That was the start of what appeared to be weeks’ worth of indirect communication between the Trump campaign and WikiLeaks through Stone and his associates, according to the indictment — and, via WikiLeaks, with Russia’s military intelligence agency, the GRU.

The charges Stone is facing are about the accounts he gave to Congress about these events. Stone vowed Friday that he’ll fight the charges and said he expects to be “vindicated” in court.

A Trump lawyer highlighted on Friday that the charges in the Stone indictment, however, aren’t about collusion — they’re about the statements Stone made to Congress and others.

“The indictment today does not allege Russian collusion by Roger Stone or anyone else,” said Trump personal attorney Jay Sekulow. “Rather, the indictment focuses on alleged false statements Mr. Stone made to Congress.”

White House press secretary Sarah Sanders attempted to distance the president from the indictment and arrest.

“The president did nothing wrong,” Sanders said in a Friday morning cable TV interview. “There was no collusion.”

And the president himself has frequently asserted via Twitter in the past two years that there was “NO COLLUSION!” between his 2016 campaign and any Russian election interference effort and called suggestions otherwise a “hoax.” Trump has also frequently referred to the Mueller investigation as a “witch hunt.”

The Stone indictment raises as many questions as it answers. Although the account it gives clarifies a few key points about the events of 2016, there are also important things that it doesn’t say.

Did any of the Americans know they were ultimately dealing with Russia?

In the summer of 2016, the fact of Russia’s “active measures” was the subject of speculation, anonymous quotes and supposition — but was not officially confirmed in public.

Since then, Mueller’s office has detailed some of Russia’s practices: Its use of social media agitation to deepen divisions among Americans, and the cyberattacks against political and other targets in search of embarrassing dirt to release.

The question now is what Stone, Trump’s then-campaign chairman Paul Manafort, Trump’s family or Trump himself knew about what was taking place behind the scenes.

Trump has gone back and forth then and now about what he accepts about the Russian election interference in 2016. But at the time he was consistent about how much he loved WikiLeaks and urged voters to focus on what it was revealing about the Democrats, no matter where the material was coming from.

The events of July 2016 followed many contacts by Russians or their agents with people in the Trump campaign — including a meeting the previous month hosted by Donald Trump Jr., following an offer of help for the campaign, again via intermediaries, from the Russian government.

Manafort also met at least once with a business associate who has been linked to the GRU and, according to court documents, allegedly discussed polling data from the campaign, although the details about that meeting aren’t clear.

And even as Trump’s political fortunes improved throughout 2016, he and his deputies were negotiating with powerful Russians behind the scenes over a potential Trump Tower project in Moscow.

But prosecutors haven’t established whether any contacts included information about Russia’s broader program of interference, or specifically whether anyone in Trump’s camp knew that Russia was behind the WikiLeaks releases.

Did Trump’s campaign know what the Russians were doing? Or did it embrace the support it was getting without being aware of its ultimate benefactor?

WikiLeaks has denied it received the stolen material from a Russian source. And it said on Friday of the Stone indictment that there was “new evidence of no ‘back channel’ with” it. But, according to Mueller’s earlier indictment of 12 GRU officers, the Russian spies used the fake persona they created, “Guccifer 2.0,” to give stolen material to WikiLeaks.

Prosecutors haven’t made clear whether they believe Assange knew for certain that he was actually dealing with the Russian government, although Secretary of State Mike Pompeo, when he was director of the CIA, declared unequivocally that WikiLeaks is a “hostile intelligence service.”

In addition to the clandestine contacts, some actions took place in the open. Trump, for example, made a leitmotif of the emails that Hillary Clinton deleted from the private server she used while she was secretary of state.

There are suggestions that Russia was listening: According to Mueller’s indictment of 12 GRU officers, the Russian spy agency ramped up its cyberattacks against Clinton and her presidential campaign that same day.

Was Trump being facetious because he considered all the discussion about Russian election interference to be a joke? Or did he have reason to expect that someone in Russia might be paying attention when he spoke?

What communications did WikiLeaks potentially have with others in Stone’s circle?

Much of the contact prosecutors contend took place between Americans and WikiLeaks allegedly was actually via two Stone associates: conservative commentator Jerome Corsi and radio host Randy Credico, who has denied being a link between WikiLeaks and Stone.

A statement issued by Corsi’s lawyers Friday says the Stone indictment vindicates Corsi — in Corsi’s view. Although Corsi contends that he testified truthfully before the grand jury and during his interviews with prosecutors, Corsi may yet face charges of his own from the special counsel, as he has said he has already walked away from a plea agreement about alleged lying about his actions. 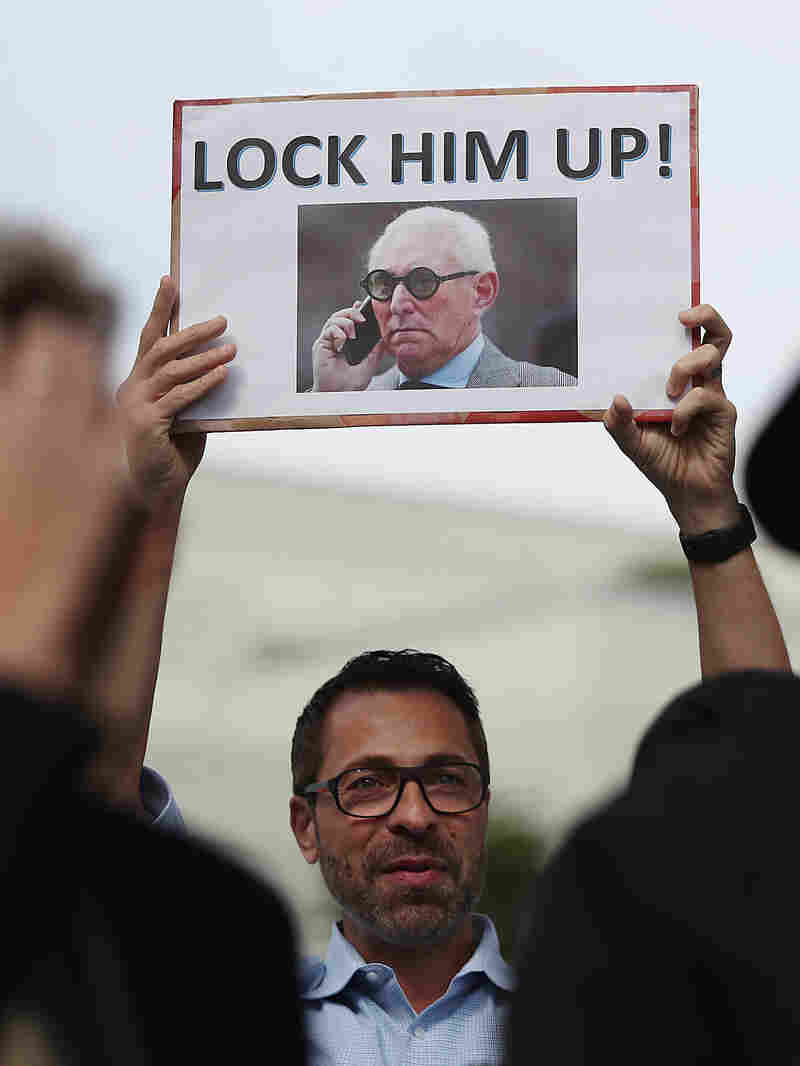 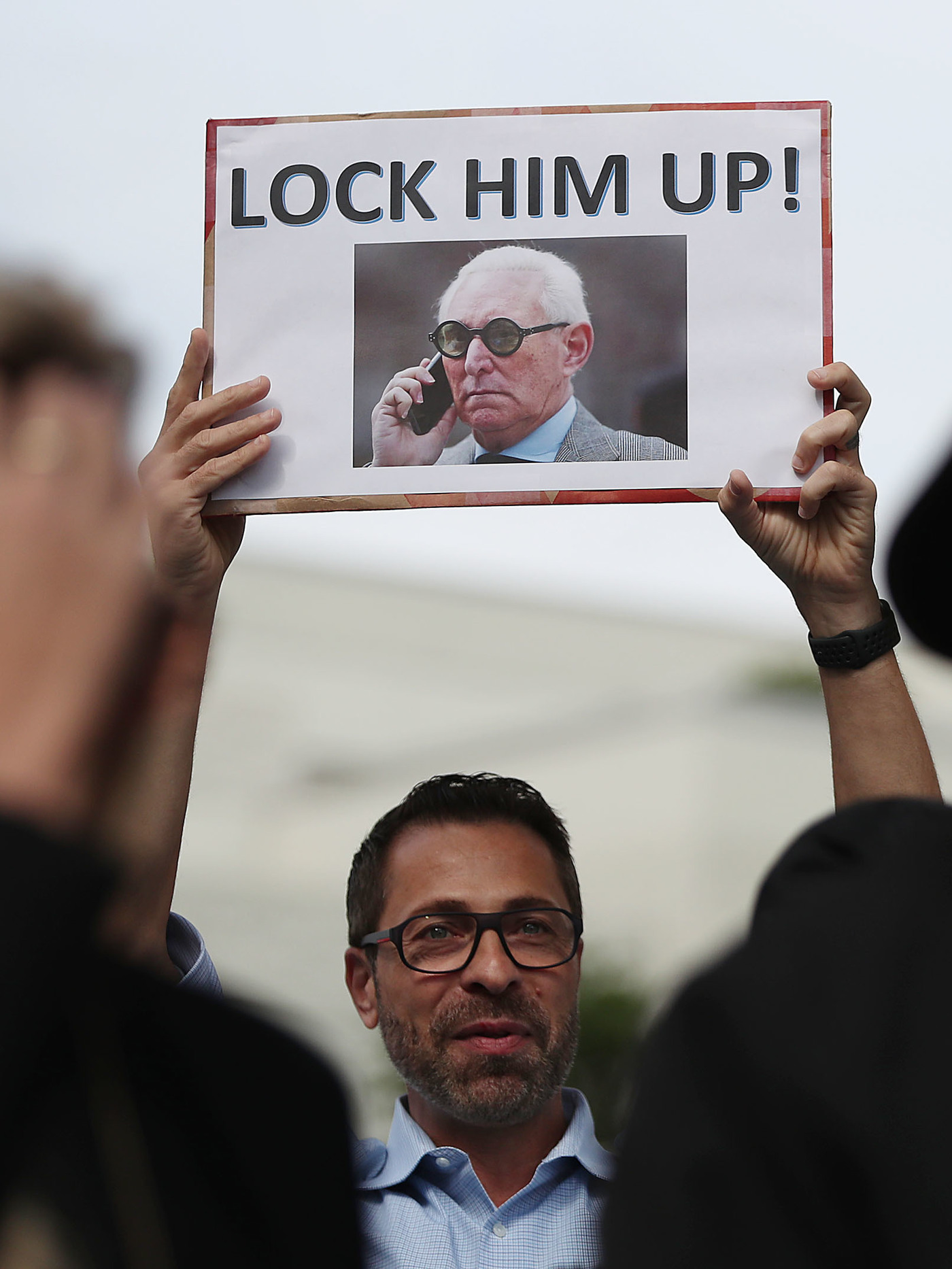 A person holds a sign while waiting for Roger Stone to leave the federal courthouse Friday in Fort Lauderdale, Fla.

A passage in the indictment unsealed on Friday suggested that someone was not only telling Corsi about WikiLeaks’ intentions, but about messaging for use against Clinton. Specifically, Corsi began to recommend to Stone that Clinton needed to be portrayed as unhealthy.

“Would not hurt to start suggesting HRC old, memory bad, has stroke — neither he nor she well,” he wrote on Aug. 2, according to the indictment. “I expect that much of next dump focus, setting stage for Foundation debacle.”

In fact, neither Clinton’s health nor the Clinton Foundation were the focus of the next WikiLeaks release, but a messaging campaign based on Clinton’s supposed ill health took off in August 2016.

Russia’s state-controlled RT news site mentioned Clinton’s “bad health,” the National Enquirer published a piece about it, Fox News host Sean Hannity discussed it on TV and then Trump himself was warning about Clinton’s fitness by Aug. 18.

Was Assange the conduit for this messaging strategy?

What action did the Trump campaign take based on its alleged communications with WikiLeaks?

Stone took credit, according to the indictment unsealed Friday, for telling the Trump campaign beforehand about the Oct. 7, 2016, release by WikiLeaks of emails stolen from Clinton’s campaign chairman, John Podesta.

He has said since that he didn’t have any inside information and he was just puffing up his own importance — taking things Assange was saying publicly and making it appear to Trump’s campaign that Stone had learned them through some kind of inside line.

Trump’s lawyer, Giuliani, said in December that Stone hadn’t given the campaign a heads-up but even if he had — as prosecutors now allege — that isn’t a crime. Giuliani compared it to getting a tip that a newspaper is about to run a story before it appears.

And Stone, as he and others observed on Friday, isn’t facing criminal charges related to the actions he took in 2016, but rather the accounts he’s given about them afterward to Congress and other related activity.

If that suggests prosecutors don’t consider Stone’s underlying conduct itself to be illegal, it also raises questions about what he or Trump campaign leaders expected out of the advance warning about the Oct. 7 disclosure.

What actions did they take — or not take — with that information, if any?