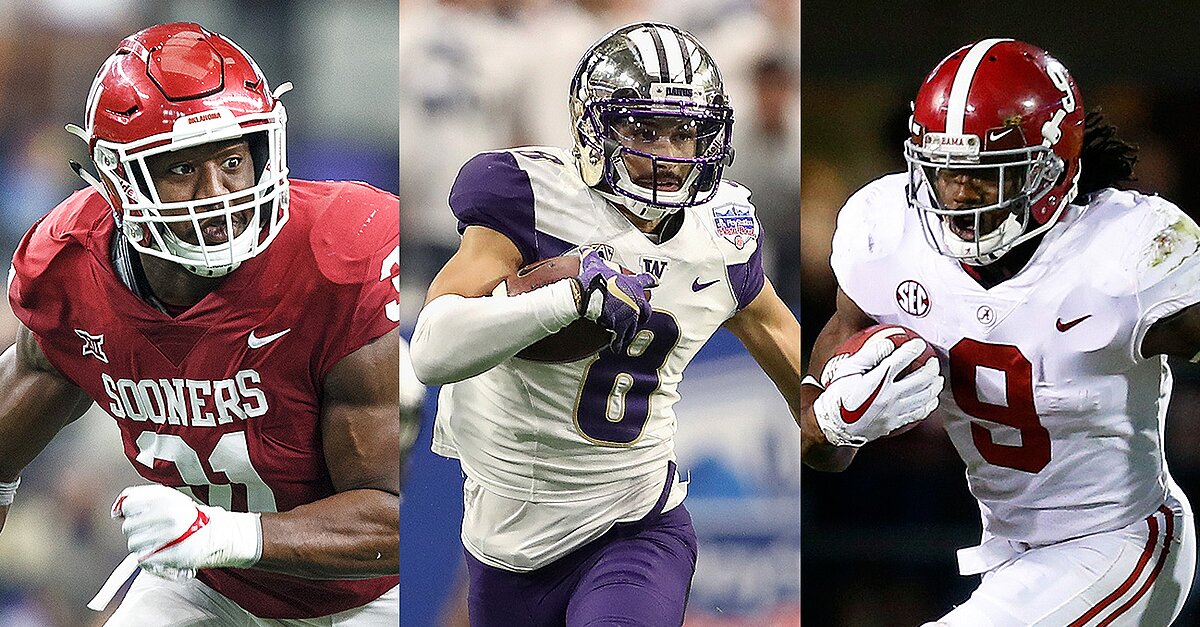 Next week SI.com will release its ranking of the top 100 college football players in the country. The compilation of the list could be best described as an imperfect blend of evaluation and projection. Everything from statistics to coaching changes to position battles factored into our thinking, but our fundamental goal was answering one simple question: Who are the best players in the country? It’s important to keep in mind that this exercise is not an assessment of pro potential; there are enough mock drafts floating around the internet to consume several hours of your work day. Rather, this ranking reflects the value we expect players to provide in the college game.

Before looking ahead to the upcoming season, we decided to conduct a review of our list from last season. We identified players that either over- or underperformed their ranking—by large margins in some cases—and tried to figure out where we went wrong, in the hope that similar mistakes can be avoided on our 2018 ranking. Below are 12 of the most notable misevaluations. Note that this group excludes guys who were significantly limited by injuries, as well as those left off the 2017 list altogether, such as Stanford running back Bryce Love, Arizona quarterback Khalil Tate and Wisconsin running back Jonathan Taylor.

Victor was regarded as one of the top defenders in the country last summer, but it quickly became clear that the preseason hype was way off the mark. The first-team All-American’s senior campaign got off to a bad start when he was suspended for Washington’s opener at Rutgers because of a reported failed drug test. Things didn’t get better from there. The Huskies moved Victor to defensive end after he failed to hold on to his starting job at middle linebacker, and a Nov. 10 loss at Stanford wound up being his final game at Washington. Victor was suspended less than a week later following an arrest on suspicion of DUI.

There were moments during Alabama’s two games against Washington and Clemson in the 2016 College Football Playoff when it felt like the Crimson Tide’s optimal strategy would be to hand Scarbrough the ball the same way, over and over, until reaching the end zone. Scarbrough tallied 273 yards on 7.8 yards per carry with four touchdowns combined against the Huskies and Tigers despite breaking his leg in the third quarter of Alabama’s championship-game loss. Yet that postseason star turn did not presage a major leap for Scarbrough as a senior. Both fellow Crimson Tide tailback Damien Harris and starting quarterback Jalen Hurts outrushed Scarbrough by considerable amounts and posted better yards-per-carry marks last season, and four teammates received more carries than him in the title-game victory over Georgia.

Sutton entered last season with a strong argument for the status of best wide receiver outside of the Power 5 conferences. By the end of the season, one would have strained to make a sound case that he belonged in the top three. Although it ultimately didn’t prevent him from becoming an early-round pick in the 2018 draft (No. 40 overall), Sutton wasn’t even the most productive pass-catcher on his own team in 2017. A year after racking up 1,246 receiving yards, Sutton’s total dropped to 1,085. (Although, he did snag two more touchdowns.) Meanwhile, SMU teammate Trey Quinn, a redshirt junior who transferred from LSU, hauled in a nation-high 114 passes for 1,236 yards—good enough to earn him Mr. Irrelevant honors as the final pick in the draft.

Thomas’s credentials heading into his senior season suggested he could serve as a stabilizing force in the back end of Oklahoma’s defense. The two-time All-Big 12 selection had 28 starts, 127 tackles, seven interceptions and 26 pass breakups to his credit. Those numbers were misleading. Although Thomas started another nine games for Oklahoma as a senior, a true freshman, Tre Norwood, wound up supplanting Thomas in the Sooners’ secondary. Norwood would go on to start the final five games of the season, including the Sooners’ Big 12 championship game win over TCU and playoff semifinal loss to Georgia, while Thomas missed out on all-conference honors and went undrafted despite setting a new record in the combine’s three-cone drill.

There were justifiable doubts over whether Pettis could fill the void as Washington’s go-to wide receiver left by future first-round draft pick John Ross. Ross was electric during his final college season, and it seemed unlikely that Pettis could provide quarterback Jake Browning a similarly potent downfield threat. Not only did Pettis shine as the Huskies’ leading pass-catcher, he may have been the most valuable special teams player in the country. He definitely was the most frightening for opposing coverage units. Pettis ran back four punts for touchdowns as a senior, increasing his career total to nine, which broke the NCAA record of eight set by Texas Tech’s Wes Welker and Oklahoma’s Antonio Perkins.

The flood of breakout sophomore projections surrounding Rashan Gary in the lead up to last season may have obscured the potential of a different Michigan defensive lineman. The anticipation over the possibility of Gary, the No. 1 recruit in the class of 2016, blossoming into a major havoc-wreaker in his second college season under ace DC Don Brown detracted from the attention paid to Hurst’s choice to return to Ann Arbor as a redshirt senior. Hurst would go on to rate out as one of the top defensive players in the nation. Over 13 games, the 6’2’’, 280-pound first-team All-America selection recorded 61 total tackles, 14.5 tackles for loss and five sacks.

Falk’s final season with the Cougars didn’t play out the way suggested by the sterling statistical résumé he assembled prior to it. In his two seasons before 2017, the former walk-on completed 890 of his 1,277 pass attempts (69.7%) for 9,029 yards with 76 touchdowns against 19 interceptions. Instead of building on those staggering numbers by finishing his college career with a flourish, Falk’s passing output deteriorated in 2017, and head coach Mike Leach benched him in multiple games. As a senior, Falk posted career lows in completion percentage (66.9), yards per attempt (6.7) and passer rating (137.0), and he checked in 73rd among qualifying signal callers in ESPN’s Total QBR metric.

Few disputed Smith’s place among the most effective interior mashers in the country prior to last season, but he was probably owed more recognition for his importance to Auburn’s offense. Smith solidified the Tigers’ protection as they broke in a new starting quarterback (transfer Jarrett Stidham) and played an important role clearing running room for SEC offensive player of the year Kerryon Johnson, who led the conference with 1,391 rushing yards. Lining up both at guard and tackle over four seasons at Auburn, the eventual second-round pick concluded his college career having started 41 consecutive games and as a senior earned the Jacobs Blocking Trophy, which is given annually to the SEC’s top blocker.

Reed’s winding path to stardom did not draw as much attention as it should have last season. He earned Big 12 defensive newcomer of the year honors in 2016 after transferring to Kansas State from Cerritos College in Norwalk, Calif., which followed a previous stint at Fresno State. In 2017, Reed affirmed his reputation as a top-end cover man while developing into a special teams nightmare for opponents. Among Big 12 defenders, Reed ranked behind only Texas’s Kris Boyd and DeShon Elliott with 13 passes defended, and he ranked behind only Elliott with four interceptions. He also ran back both a kick and punt for a touchdown and led the conference in average kickoff return yardage (34.24) and punt return yardage (14.88).

Risner’s track record coming into last season attested to his run and pass-blocking prowess in Kansas State’s offense: 26 games started over two years, a first-team All-Big 12 nod in his second year. Those credentials should have earned Risner more praise at the outset of his junior campaign. Failing that, they should have hinted at his potential to bloom into one of the sport’s premier linemen. Last season the 6’5’’, 300-pound senior right tackle functioned as a pivotal people-mover in a rushing attack that ranked behind only Oklahoma among Big 12 teams in yards per carry. Risner also earned a spot on Pro Football Focus’s All-America team, with the outlet noting that he allowed just three total “pressures.”

A rocket-fueled offense is the primary reason Oklahoma won 12 games and its third consecutive conference championship to reach the playoff last season. But one superlative performer on the other side of the ball shouldn’t go unmentioned. Okoronkwo flashed his potential in 2016 by recording 12 tackles for loss and nine sacks while supplying the pass-rushing bite the Sooners needed after losing standout Eric Striker, but he elevated his game as a redshirt senior in 2017. A 14-game starter at Oklahoma’s end/linebacker hybrid JACK position, Okoronkwo upped his TFL figure to 17.5, good for second in the Big 12, checked in third in the conference with eight sacks and forced three fumbles.

The abundance of topline running backs in the Pac-12 last season—from Stanford’s Bryce Love to Washington’s Myles Gaskin to Oregon’s Royce Freeman—made it difficult for Jones to stand out in a USC offense piloted by Heisman Trophy contender Sam Darnold. Jones managed to distinguish himself as a lethal, big-play burner anyway. After splitting carries with senior Justin Davis as a sophomore in 2016, as a junior Jones scaled his production while remaining effective on a per-rush basis, increasing his carry load from 177 to 261 while notching 5.9 YPC. The future second-round pick totaled 1,550 rushing yards, behind only Love among Pac-12 tailbacks, and 19 rushing touchdowns, behind only Gaskin.