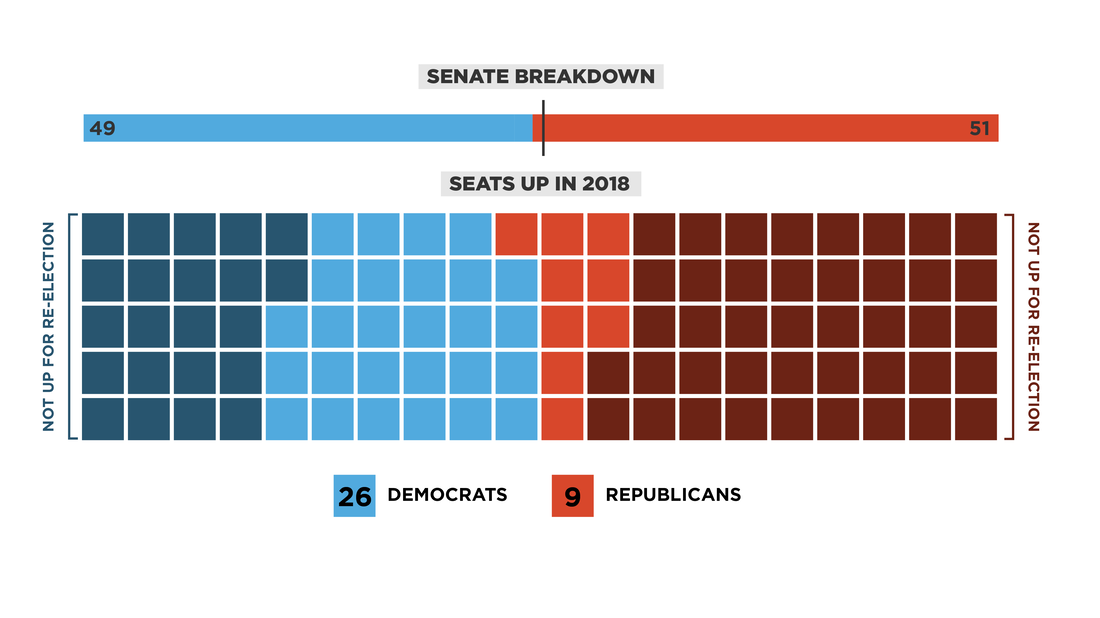 Republicans currently have 51-49 majority in the Senate, with two independents caucusing with Democrats. With Vice President Pence as the tie-breaker in the Senate, Democrats need to flip a net of two seats in 2018 to win back the majority. Renee Klahr/NPR hide caption 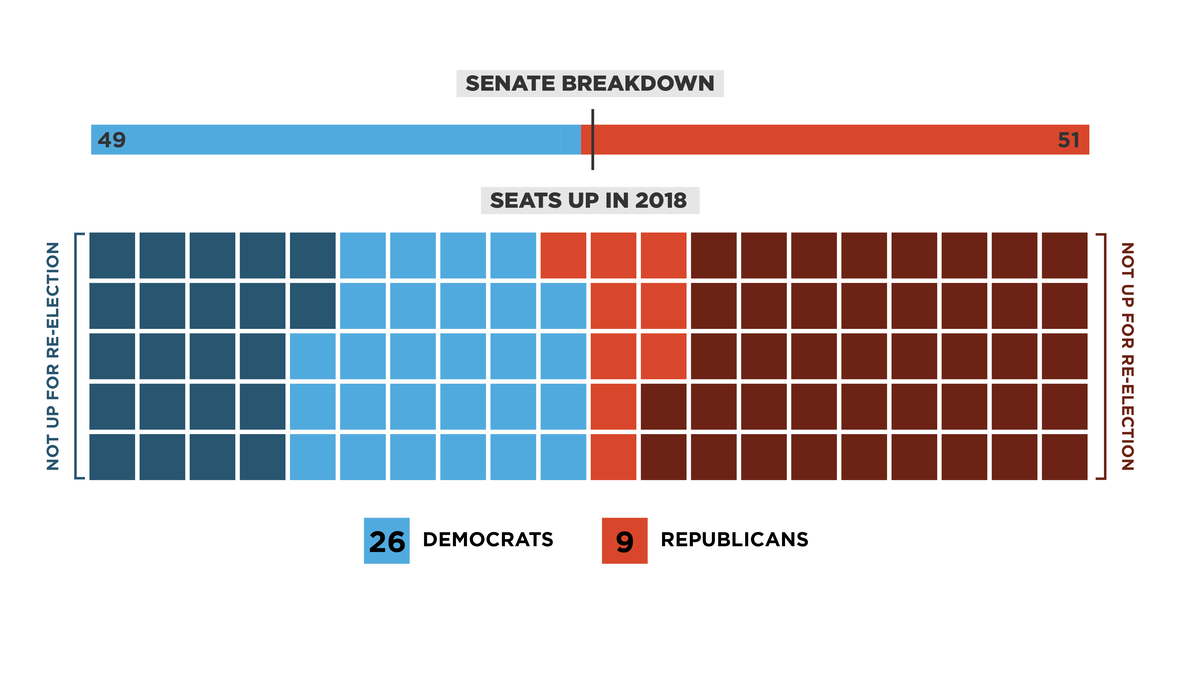 Republicans currently have 51-49 majority in the Senate, with two independents caucusing with Democrats. With Vice President Pence as the tie-breaker in the Senate, Democrats need to flip a net of two seats in 2018 to win back the majority.

Democrats are going into the 2018 elections with the wind at their backs, which could even be enough to flip a Senate map heavily stacked for Republicans come November.

In conversations with several top GOP strategists, nearly all conceded that the overwhelming Democratic enthusiasm they’re facing this November is incredibly worrisome. Most still think it’s a better than even chance that they do keep the Senate — albeit narrowly — but it’s no longer out of the realm of possibility that the upper chamber could change hands, especially given the volatility of the GOP’s two-seat majority.

“Generally speaking, close races aren’t won by the party with the wind in their face. That’s not the way it works,” said one top GOP Senate race veteran. “If we lose 40 to 50 seats in the House, you can’t pick up three to four Senate seats.”

“If we hold the Senate, I think it will be close. It will be closer than it should be when the cycle started,” said another longtime Republican Senate operative. “There’s no question it’s far more in play than it was a year ago.”

Moreover, lackluster fundraising as of late from GOP challengers and stronger-than-expected hauls from Democratic incumbents has further stoked worry among Republicans.

Many Republicans are already beginning to make the argument in some surprisingly volatile states like Tennessee that the Senate majority is on the line — hoping to woo voters to the polls by hammering home the implication that something as important as another Supreme Court vacancy could be left in the hands of Senate Democratic Leader Chuck Schumer.

Still, Senate Leadership Fund President and CEO Steven Law, who runs the superPAC aligned with Senate Majority Leader Mitch McConnell, recently noted that the last time the House flipped in 2010, Democrats lost the House and still managed to hold onto their Senate majority because those statewide races were more insulated from national trends. 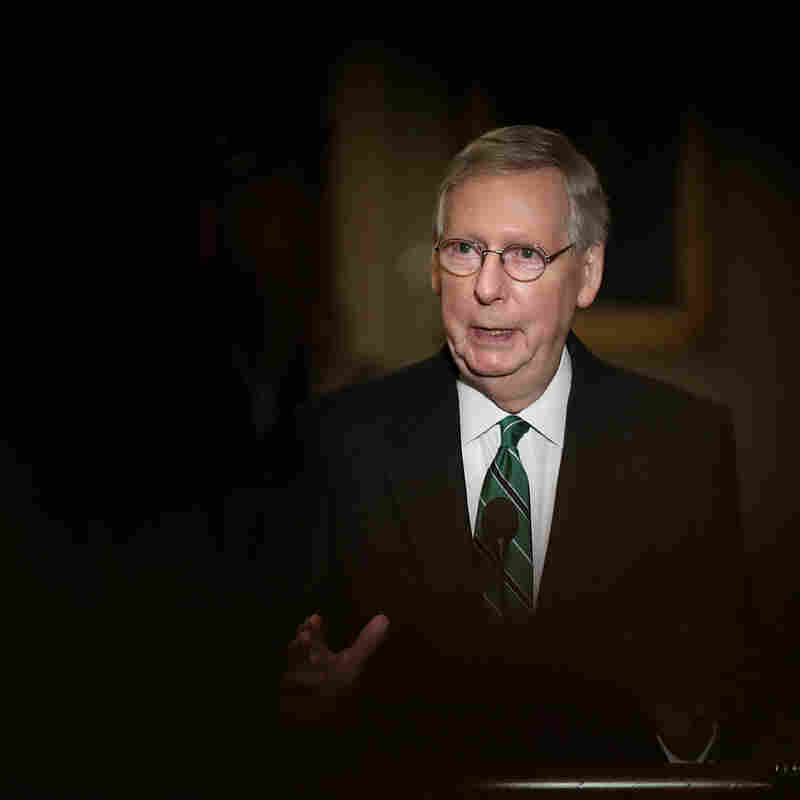 Senate Majority Leader Mitch McConnell (R-KY) at a press conference at the U.S. Capitol March 6, 2018. While Republicans started this election cycle as favorites to hold the Senate, it’s increasingly up in the air as to whether McConnell will hold his gavel next year. Win McNamee/Getty Images hide caption 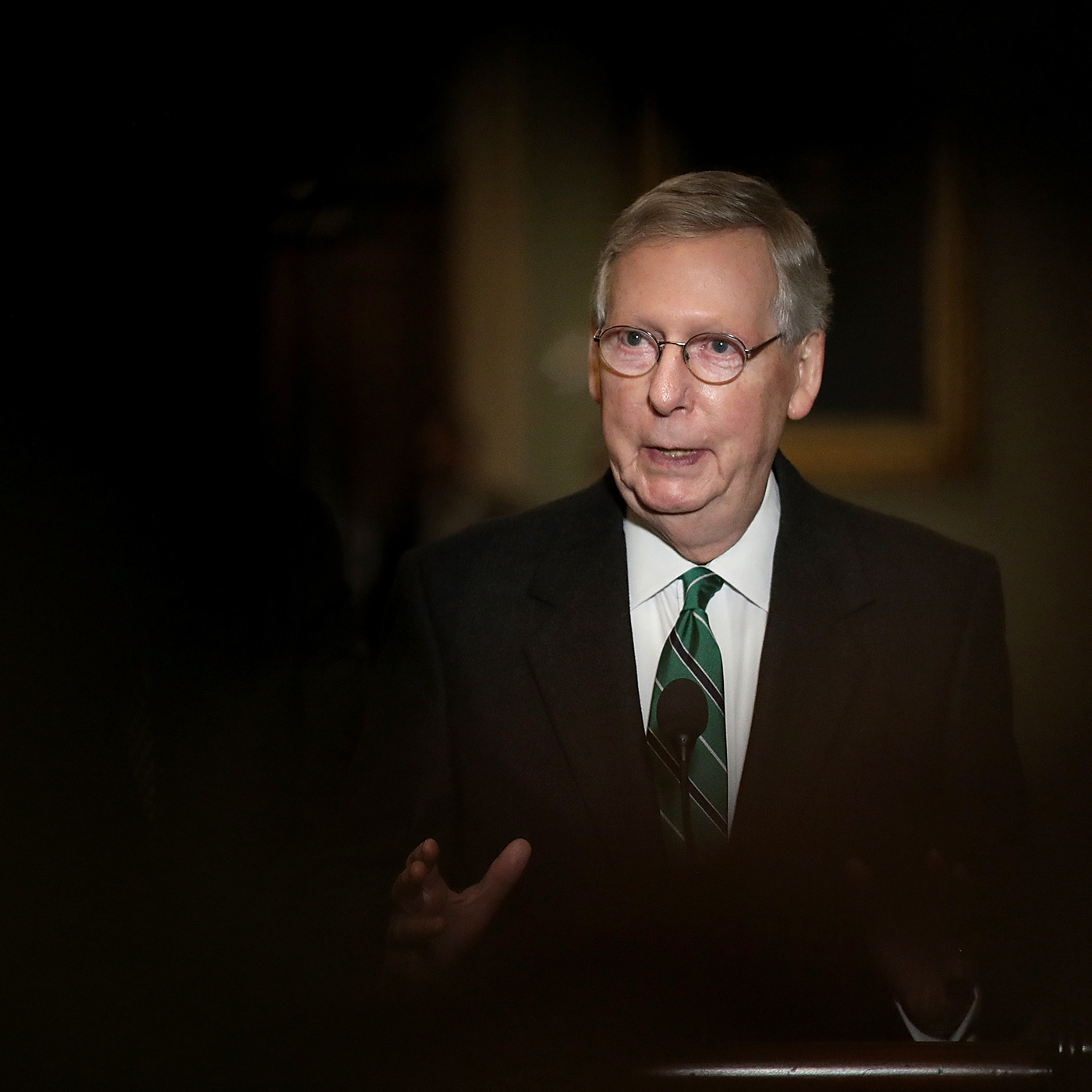 Senate Majority Leader Mitch McConnell (R-KY) at a press conference at the U.S. Capitol March 6, 2018. While Republicans started this election cycle as favorites to hold the Senate, it’s increasingly up in the air as to whether McConnell will hold his gavel next year.

“The political train in the Senate is a lot more favorable for Republicans than it is in all these House districts that were carried by Hillary Clinton…I think we’ve got a lot more terrain to play with that makes the task of defending the Senate majority, I wouldn’t say easy, but a task that we think we can undertake and win,” Law said last month on MSNBC’s “Meet the Press Daily.”

However, one reason Republicans were unable to flip some of those Senate seats was because of problematic nominees from their own party, and as the Senate primaries begin in earnest, they’re hoping to avoid disasters.

Overall though, Republican fortunes in keeping the Senate aren’t as good as they should be, especially given the near-perfect map they were gifted this cycle. Democrats are defending 26 seats — 10 of which are in states that President Trump carried — while Republicans have nine seats on the ballot, and only one (Nevada) in a state that Hillary Clinton carried.

Most Republicans believe Sens. Joe Donnelly in Indiana and Claire McCaskill in Missouri are their best chances to win seats currently held by Democrats. In recent weeks, one of the best bits of news for Republicans was when Florida Gov. Rick Scott announced he would challenge Sen. Bill Nelson. The billionaire Scott can give freely to his own campaign, forcing Democrats to perhaps divert resources from other contests.

In the next tier are Democratic incumbents in states President Trump won by more than 20 points — North Dakota’s Heidi Heitkamp, West Virginia’s Joe Manchin and Montana’s Jon Tester. But even Republicans admit all three have strong political identities distinct from the national Democratic party and that they won’t be that easy to knock off as once thought.

In addition, once-competitive states such as Ohio and Pennsylvania have slipped from being realistic opportunities according to multiple GOP sources, both in part because Republicans have struggled to attract strong candidates. Some Republicans still mention Wisconsin as a possible sleeper race, where Democratic Sen. Tammy Baldwin is running for re-election.

Meanwhile, Republicans are at risk of losing as many as three of their own seats. The most endangered is Sen. Dean Heller’s seat in Nevada, a state won by twice by Barack Obama and again by Hillary Clinton in 2016. The contest to replace retiring Sen. Jeff Flake in Arizona worries many Republicans because a late unsettled primary contest could weaken the party’s nominee in a state that’s changing rapidly. And what should be a safe seat in Tennessee is becoming anything but a sure thing, rocketing up the list of GOP concerns.

All in all, everything has to go right for Democrats to flip the two seats they need to win control of the Senate, including hanging onto most of their own endangered incumbents. But Republicans are growing increasingly pessimistic about their chances come November — and as many privately note, the environment is probably going to get worse for them before it gets better.

Contests on Tuesday will determine GOP nominees in two critical contests. West Virginia is the biggest test yet as to whether Republicans could forgo a winnable opportunity due to primary squabbles. A nasty three-way race there pits Rep. Evan Jenkins (the establishment favorite), Attorney General Patrick Morrisey (who argues he’s the true conservative candidate in the race) and coal CEO and convicted felon Don Blankenship (who’s the most Trump-like figure) against each other.

Blankenship is giving Republicans the most heartburn with a racially-charged campaign that’s focused as much on Senate Majority Leader Mitch McConnell as it is on Sen. Joe Manchin. The former CEO of Massey Energy was convicted in 2010 of conspiring to violate federal mine safety standards after an explosion killed 29 miners. He served a year in prison and is still on probation, but has painted himself as the scapegoat of federal prosecutions run amok. If Blankenship wins the nomination, Republicans fear their chances of winning would evaporate.

The GOP nomination is also up for grabs in Indiana in another bitter three-way race, this time between Reps. Todd Rokita and Luke Messer and businessman Mike Braun. Braun, who’s funding his own campaign, has styled himself the outsider in the contest, and in a memorable ad even carried around cardboard cutouts of both Rokita and Messer — who dressed similarly for an early debate — to underscore the similarities of the two congressmen.

Republicans say they’d be happy with any nominee against Donnelly, who benefited in 2012 from a gaffe-prone GOP nominee. However, in both Indiana and West Virginia, Democrats are ready to repurpose the same attacks the Republicans have been using against each other for their fall campaigns.

“Republicans are airing all this dirty laundry for us, and they’ve been doing it pretty rampantly,” said one Democratic operative involved in several Senate races this cycle.

Donnelly and McCaskill are regarded as the most vulnerable Democratic incumbents as of now. In Missouri, McCaskill is likely to face state Attorney General Josh Hawley, who’s been thrust in the unwelcome position of investigating Gov. Eric Greitens, a fellow Republican, in an increasingly messy sex and campaign finance scandal that could lead to Greitens’ impeachment.

While Republicans got a break in North Dakota earlier this year when GOP Rep. Kevin Cramer decided eventually to run for Senate, Heitkamp has made overtures to the Trump White House and still seen as an independent figure in the state. Veterans of past Senate campaigns caution she won’t be as easy as some think to knock off.

The same is true for Tester in neighboring Montana, who recently raised multiple allegations of wrongdoing against Ronny Jackson, Trump’s pick to lead the Department of Veterans Affairs, which ultimately sank his nomination. Trump has fired back against Tester repeatedly over those actions and some Republicans think the Jackson issue could hurt Tester at home. But in a state where nearly one in ten residents are veterans, Tester is betting that the episode won’t have an impact on his race this fall.

Republicans find themselves on defense

The two most vulnerable seats for Republicans are in the Southwest. In Nevada, the White House maneuvered to head off a primary challenge against Dean Heller in Nevada, the most endangered GOP incumbent in the country. But in anticipation of a primary, Heller, who was once critical of Trump, also embraced Trump in a way that could have a lasting impact on his race against likely Democratic nominee, Rep. Jacky Rosen, come this fall. But Republicans counter that Trump’s numbers in Nevada, which he lost to Clinton by 2 points, have rebounded.

McSally turned in a strong fundraising haul, even besting likely Democratic nominee, Rep. Kyrsten Sinema. Republicans believe that McSally, a former Air Force fighter pilot, has just the profile needed to hold this seat and she’s widely favored to win the primary. But the question is whether conservatives will launch an all-out assault that will damage her in the general election. And like Heller, McSally has had to embrace Trump after refusing to endorse him in 2016.

National Republicans think this race will be lost if anyone other than McSally wins, and question what Trump — who’s been complimentary of Ward and is downright chummy with Arpaio — will do. Vice President Pence’s remarks last week in favor of Arpaio when he visited the border certainly didn’t help the primary situation, either.

Tennessee has emerged as the biggest wildcard that could make or break the Senate majority for both parties. Democrats scored a major coup by convincing former Gov. Phil Bredesen to enter the race after frequent Trump critic and GOP Sen. Bob Corker announced he wouldn’t run for re-election.

In recent weeks, Corker has made glowing remarks about Bredesen, who he worked closely with when the Democrat was governor and Corker was the mayor of Chattanooga, while not even mentioning the name of the Republican, Rep. Marsha Blackburn, other than to note she would be the GOP nominee and he had donated to her campaign.

Early polls show Bredesen with a lead, but Republicans argue that he has statewide name recognition, which Blackburn does not and that the race will tighten over time. Republicans are also left hoping that their voters will come out if they know their vote means the difference between a Democratic or a Republican-controlled Senate. Still, this contest has more than a few national strategists worried.

Tennessee is more likely to flip than is Texas, despite Democratic Rep. Beto O’Rourke’s strong fundraising over GOP Sen. Ted Cruz. The only other wildcard could be the special election in Mississippi to replace Sen. Thad Cochran, who resigned last month due to failing health. There’s some conservative skepticism about newly-appointed Sen. Cindy Hyde-Smith, a former Democrat.

Conservative state Sen. Chris McDaniel — who nearly ousted Cochran in a nasty 2012 primary — switched to this race and is challenging Hyde-Smith in an all-party open primary on Nov. 6. If no candidate gets 50 percent on Election Day, the race will go to a November 27 runoff. Meanwhile, former U.S. Agriculture Secretary and ex-congressman Mike Espy is the Democrats’ best-known candidate.