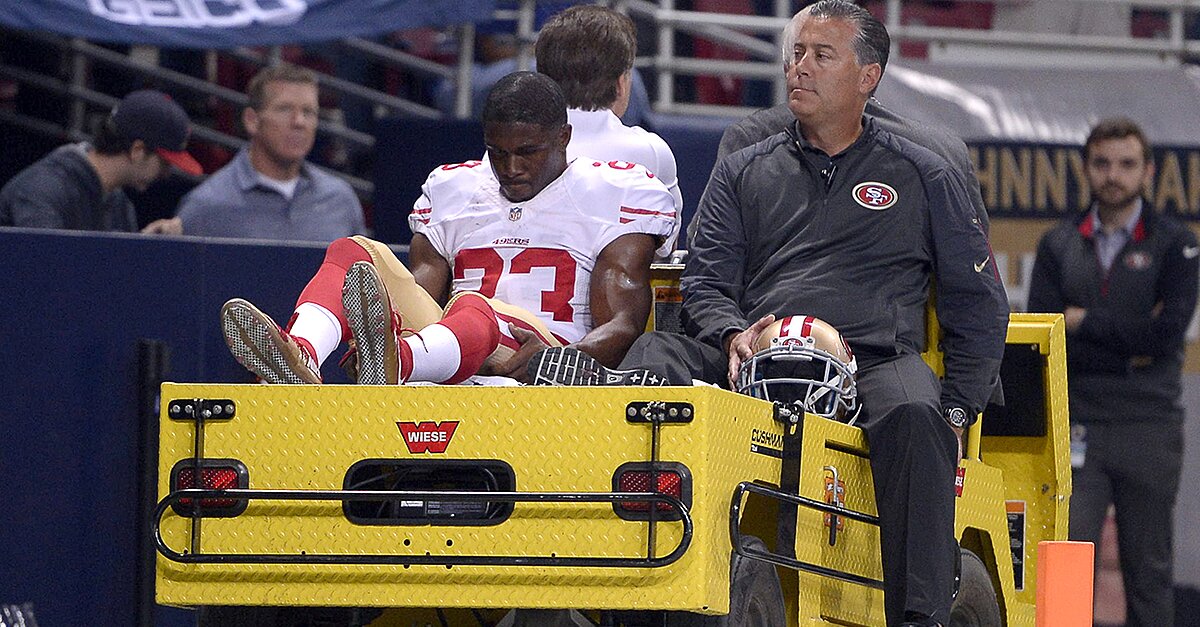 A jury in a St. Louis Circuit Court on Tuesday awarded former NFL running back Reggie Bush $12.5 million in damages for injuries he sustained as a result of slipping onto an uncovered—and slippery—concrete surface in St. Louis’s Edward Jones Dome on Nov. 1, 2015. The Los Angeles Rams, possibly along with its insurance companies, will be required to pay Bush. The St. Louis jury found that the team, which had moved from St. Louis to Los Angeles in 2016, was solely responsible.

Jurors reasoned that the Rams negligently permitted and maintained a dangerous condition to exist in the Dome, thereby creating an unreasonable risk of injury to players. As explained below, Missouri law will limit the amount of money that Bush will actually receive from the Rams. Also, the Rams can appeal the verdict and they intend to ask for a new trial.

Why Bush won and why the Rams lost

The incident occurred on a play when Bush, who at the time was playing for the San Francisco 49ers, returned a punt. After being pushed out of bounds, Bush could not stop his momentum on the turf. Surrounding the turf was a circular area of concrete known ominously as “the concrete ring of death.” Propelled by his momentum, Bush ran from the turf onto the concrete. He then slipped and fell very hard. As Bush landed awkwardly on the concrete, he suffered a season-ending tear to the anterior cruciate ligament in his left knee.

Led by attorney John Simon of the Simon Law Group, Bush’s legal team emphasized that this field condition had shown itself to be dangerous only a week prior. It was then when quarterback Josh McCown, while playing for the Cleveland Browns, slipped on the same concrete surface and hurt his shoulder. Bush’s attorneys emphasized that such dangers were neither obvious to players nor avoidable since a player running a full speed sometimes can’t stop before reaching the concrete area. The attorneys highlighted that sports facilities owe a duty to invited guests—which include players, cheerleaders, coaches, referees and journalists—to remove or warn of any dangerous conditions and to maintain the playing surface and surrounding areas so that they are reasonably safe.

The Rams unsuccessfully argued that Bush failed to prove that the fall caused the ACL tear. The team insisted that Bush, who had a long history of knee problems, could have already suffered the tear prior to the fall. Joel Currier of the St. Louis Post-Dispatch reports that during the trial, Rams attorneys aggressively tried to depict Bush’s knee as something of a walking time bomb:

[Jurors] were shown video clips of Bush’s injury numerous times in real-time and in slow motion as doctors offered opinions on whether the concrete caused Bush’s fall or if previous injuries contributed to it. Rams lawyers elicited testimony that Bush may have heard and felt a pop in his knee before reaching the concrete strip off the sidelines.

One hurdle with such a defense is the so-called “eggshell skull” rule. It dictates that a negligent defendant is responsible for all of the harm he/she causes the plaintiff even when the plaintiff was, because of a skull “as fragile as an eggshell,” more susceptible to a worse injury than the average person.

Here, even if Bush’s preexisting problems placed him at a greater risk of an ACL tear than a typical NFL player, the Rams were still responsible for Bush’s unusually severe outcome. Missouri has adopted a version of the eggshell skull rule. It prevents defendants from attempting to minimize damages by highlighting a plaintiff’s preexisting conditions.

Earlier in the litigation, the Rams unsuccessfully argued that Bush’s lawsuit should be dismissed on grounds of “preemption.” In this context “preemption” means that provisions in the collective bargaining agreement between the NFL and NFLPA should have forced Bush to internally resolve grievance with the NFL before being allowed to turn to the courts. The Rams raised this argument after removing (transferring) the case from state court to the U.S. District Court for the Eastern District of Missouri.

To that end, the Rams highlighted how Article 50, Section 1 of the CBA requires the establishment of a joint NFL-NFLPA committee to study the safety of playing equipment and playing surfaces. The team stressed that the joint committee would be tasked with determining the degree of care that teams owe players. Until the joint committee determines such a degree, the Rams reasoned that no court should hear Bush’s claims. U.S. District Court Judge Jean Hamilton was unconvinced by this argument, noting that the relevant federal law (the Labor Management Relations Act) does not call for preemption when there is only a “mere reference to the CBA.” Judge Hamilton observed that regardless of the joint committee’s future recommendations, the Rams have a duty to warn players of hidden safety risks. The case was then returned to state court.

Until last week, the Rams were joined as a defendant with the publicly funded St. Louis Regional Convention and Sports Complex Authority and the St. Louis Convention and Visitors Commission. Those two public entities, however, convinced St. Louis Circuit Court Judge Calea Stovall-Reid that they were not proper parties in the litigation. They noted that under Missouri law, public entities must have exclusive control over the relevant premises or they cannot be held liable for injuries. Here, the Rams—and, by extension, the NFL—controlled the premises on the day Bush played in the Edward Jones Dome. As a consequence, the public entities were removed from the litigation and Rams are entirely on the hook to pay the $12.5 million damages award.

At the time of the injury, Bush was 30 years old and had battled injuries and inconsistency over the previous two seasons. In 2014, he rushed for only 297 yards and had 40 catches in 11 games for the Detroit Lions. The tide hadn’t turned in 2015. At the time of the incident in St. Louis, Bush had only rushed for 28 yards and had four catches. While Bush’s attorneys surmised that their client would have received a three-year contract if not for the injury, Bush was clearly no longer the 1,000-yard running back he had been between 2011 and 2013. Along those lines, Bush was a decade removed from being one of the greatest college football players in history while starring at the University of Southern California.

This discussion is relevant because it challenges Bush’s argument that he had suffered a significant loss of future earnings. Bush played the 2015 season on a $1.6 million contract that was only guaranteed up to $500,000. It stands to reason that even if Bush had not been hurt against the Rams, his future earning potential in the NFL was uncertain. Bush returned to the NFL in 2016 when he signed with the Buffalo Bills. He played sparingly over 13 games, rushing for -3 yards and catching 7 passes. He then retired.

While Bush’s future earnings in the NFL were arguably limited at the time of his injury, jurors likely found other aspects of his damages to be of high value. As reported by Currier, Bush spoke candidly about how the injury devastated him emotionally:

I wasn’t ready to end. I wanted to keep playing. I wanted to go out on my own terms. I never envisioned, as a little boy, my career ending, slipping and falling on concrete during a football game.

Jurors also awarded Bush $7.5 million in punitive damages. Such damages are designed to punish defendants who engage in especially egregious misconduct and to warn similarly situated defendants that they better think twice about causing the same harm to others. Here, Bush convinced jurors that the Rams showed complete indifference and conscious disregard of his safety. Jurors clearly wanted to punish the Rams, which according to Forbes are worth $3 billion. Jurors also wanted to use the punitive damages award to admonish other NFL teams that they better safeguard their premises from dangerous conditions that could injure players.

The punitive damages award is poised to raise additional legal issues. First, Missouri law requires that half of a punitive damages award (after deducting for attorneys’ fees and expenses) be deposited into the state’s tort victims’ compensation fund. This fund helps to compensate persons who were injured due to the negligence of a defendant who is then unable to pay the plaintiff. Such a defendant might lack adequate insurance or may have filed for bankruptcy, thereby eliminating the need to pay certain civil judgments. The fund pays a plaintiff who was injured by such a financially challenged person. To that end, the law calls for the state to have an automatic lien for half of the awards containing punitive damages. Bush thus stands to lose up to $3.75 million to the tort victims’ compensation fund.

Second, in an appeal or new trial, attorneys for the Rams will likely argue that the punitive damages award is excessive and unsupported by facts. The team could also argue that the award partially reflects the bias and passion of jurors who were upset less by Bush’s injury and more by the team moving out of St. Louis for Los Angeles.

The rarity of players suing over injuries could become less rare

As I explained in an SI article on former New York Yankees outfielder Dustin Fowler’s lawsuit against the Chicago White Sox over a gruesome patella tendon rupture he suffered while crashing into a wall at Guaranteed Rate Field, professional athletes who suffer serious injuries while playing games seldom sue over those injuries. There are a variety of explanations for this dynamic. Those reasons include that player injury claims usually must first be resolved through collectively bargained grievance procedures, that teams often fully cover players’ health expenses and that players assume numerous risks of injury.

Yet Bush and Fowler buck that trend. Perhaps injured players, who like most people online enjoy greater access to legal information about their rights, will be more willing to take their grievances to court.