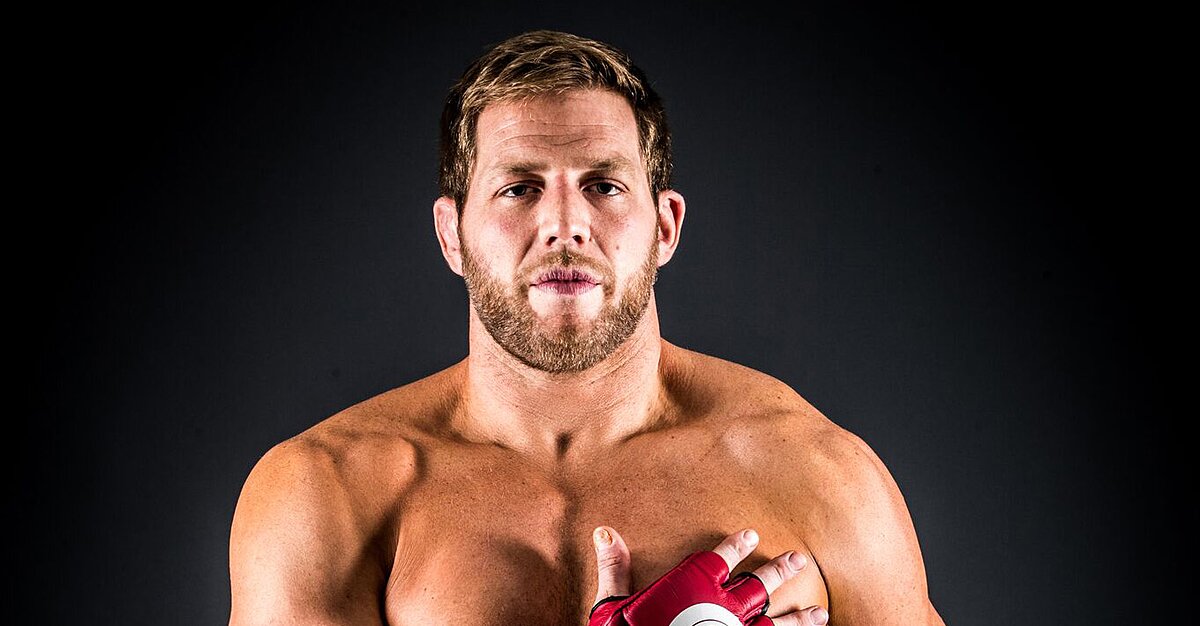 Jake Hager—best known for his time in WWE as Jack Swagger—is making his mixed martial arts debut this Saturday for Bellator MMA.

Hager fell out of favor with WWE, but he played a prominent part on the card as recently as WrestleMania 29 when he challenged Alberto Del Rio for the world heavyweight championship. In an interview with Sports Illustrated, Hager discussed his upcoming Bellator debut, internal politics in WWE and his next step in pro wrestling.

The 36-year-old’s heavyweight fight against J.W. Kiser will be broadcast from the Los Angeles Forum, in a card headlined by Fedor Emelianenko, on the Paramount Network, as well as streaming live on DAZN, this Saturday at 9 p.m. ET.

After years of working in sports entertainment, the chance to control his own narrative is fueling Hager’s drive. A win on Saturday will help elevate his status in MMA, as well as raise his profile in pro wrestling.

Justin Barrasso: You are a former All-American wrestler at the University of Oklahoma, and had a prolific career in WWE. What are you looking to prove to yourself in Bellator?

Jake Hager: I’m a competitor. I had that reputation in my time at the WWE. I would walk into a locker room, start wrestling with someone, and all I’d hear is, ‘There goes Swagger again.’

I don’t feel like I’m doing this because I have something to prove. I’m doing this because I love it. It’s an unbelievable opportunity to put myself in the driver’s seat going forward with MMA and professional wrestling. The crossover is going to make a big splash. That’s why I left a high-paying job to go and get potentially severely injured in a cage. To me, the risk is worth the reward.

Toward the end of my career with WWE, I found myself in a comfort zone. Looking back at it now with a little more perspective, it was killing me. Now I’m happier and home more than I’ve ever been before. And I have a huge opportunity on January 26 to continue this and solidify this.

Plus, I have to pay for my little kids’ school tuition. That definitely pushes me forward, too.

JB: Your goal is to make J.W. Kiser tap out in the cage this Saturday. Success is more complicated in WWE, as it is not true sport in the sense that you can outwork an opponent to win. When you were on the WWE roster but not on the card, were you still at the shows? Even though you were still being paid by the company, did the fact you weren’t being used eat away at you?

JH: Typically, before Raw or SmackDown, we’d already be on the road doing live events, so I’d be backstage for the television shows. They like to have excess talent there just in case Vince has a whirlwind idea or his flavor of ice cream is pretty crazy that day, so I would be there. I’d see what I had: a one-segment, six-minute match.

For me, the wins and losses in pro wrestling never mattered. The thing that matters is the time on television to tell that story. If you have a two-segment match on television, whether you win or lose, both people’s brand win with a great match. But I slowly got away from that. Maybe I was too far into a comfort zone, maybe they didn’t see something in me. Either way, it was a mistake on both sides. I’m not going to point fingers for anything that I didn’t accomplish, I’ll take full responsibility for that. But it was tough to be backstage knowing that if I had an opportunity, I could do a lot with it. That goes into why I’m here in MMA, to make my opportunities.

JB: How can the Bellator match help your pro wrestling career?

JH: MMA puts me in the driver’s seat. There aren’t many pro wrestlers who can choose where they want to go and work. My focus right now is on the MMA side of things, but it’s hard not to notice the awesome things happening outside of WWE in professional wrestling.

JB: You touched on how there is so much taking place in pro wrestling outside the WWE. What does All Elite Wrestling mean for pro wrestlers?

This is one of the biggest announcements to hit professional wrestling since the internet. It’s huge, I cannot stress how big this is. I really hope this takes off and becomes what everyone thinks it’s going to be. I don’t have a doubt it will.

JB: If you could choose one person from the WWE roster to fight in the Bellator cage, who would it be?

JH: I could choose anybody? I’d want to take down the king in front of the entire kingdom, so I’d go after Triple H or Shawn Michaels. Those would be the guys I choose to fight.

JB: Outside of Brock Lesnar and Bobby Lashley, is there anyone on the WWE roster who could make a career in MMA?

JH: Shelton Benjamin. That guy is just an electric athlete. We definitely rolled a couple times. I won’t say he won, but it wasn’t me that won, either. He’s always been fun to watch, and you can just see the athleticism dripping out of him.

JB: For those still on the fence, why should people invest the time to watch you in the cage this Saturday night?

JH: With me on the card, it adds a lot of entertainment, mystery, and mystique. Whether you tune in to see me get knocked out or you want to tune in to see me handle business, it’s going to be an amazing card—highlighted by the fact that UFC canceled their card after trying to sabotage it. They couldn’t compete with our card.

JB: Give us a spoiler: how does this fight end?

JH: I ran into Mark Henry the other day. Mark’s a big guy, and he grabbed me by the ribs and said, ‘You inflict your will!’ That stayed with me and still fires me up. Believe me, I’m planning on doing just that.

I am the only professional MMA wrestler in the world that can say he is best friends with that cage. So me and my best friend are going to do a lot of work that night. I’m looking to take him down to the ground and inflict my will on him.