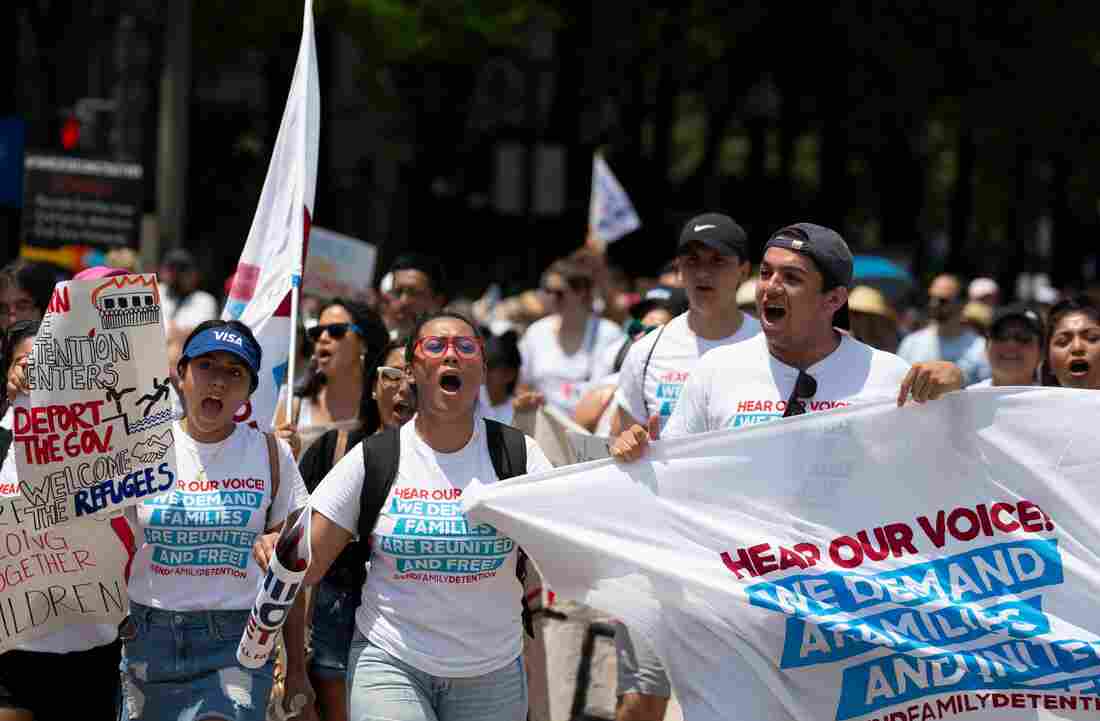 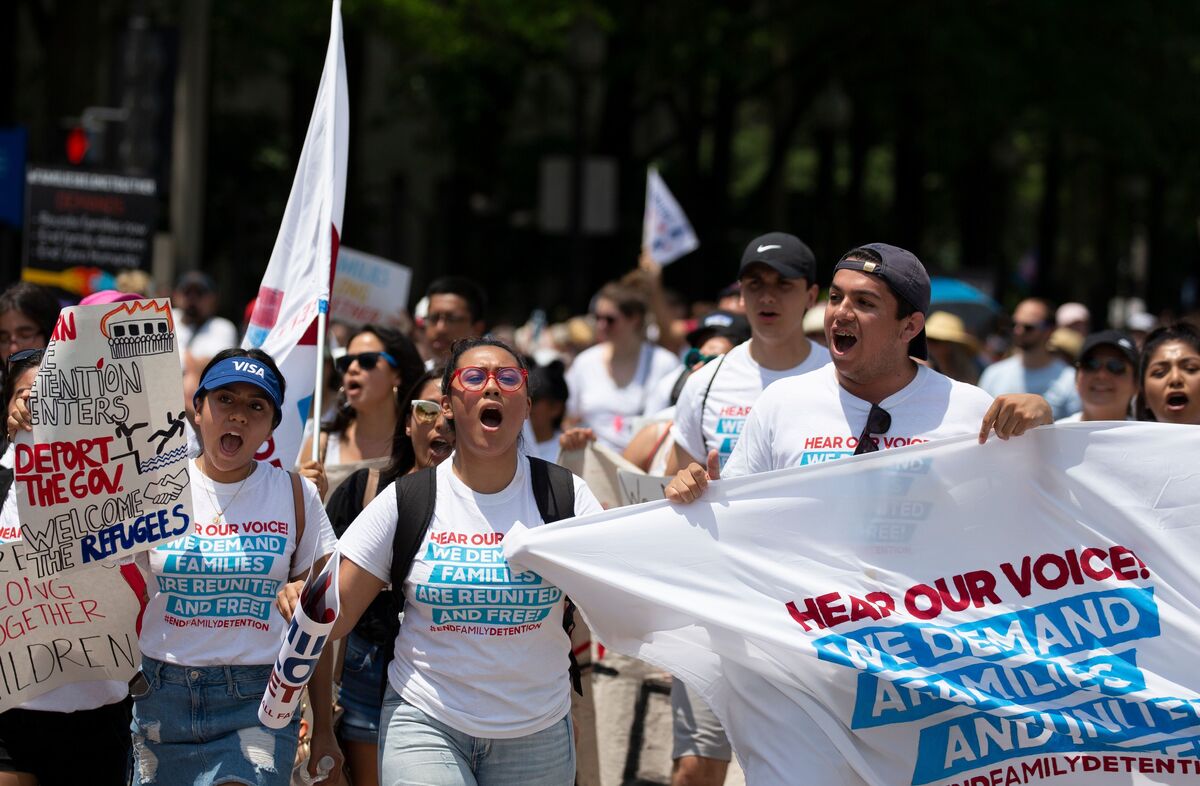 Demonstrators march in Washington on Saturday against the separation of immigrant families.

The “Families Belong Together” marches were planned in response to the administration’s policy of separating children from their parents at the southern border.

In Washington, thousands gathered despite the sweltering summer heat. They carried umbrellas, fans and water bottles. Many wore white, channeling a practice of solidarity that is historically used in social justice movements, NPR’s Windsor Johnston reports. Others carried foil sheets, mimicking what were meant to serve as blankets for detained children.

The rally became a family event, with children clutching signs and parents telling NPR that to protest is to be a part of the American fabric — especially before Independence Day.

One woman told NPR’s Cecilia Lei and Adhiti Bandlamudi that she felt conflicted about the meaning of July 4 this year because of the Trump administration’s treatment of immigrants. Still, she dressed her daughter in red, white and blue to keep a conversation on patriotism going.

At the White House, crowds grew silent as loudspeakers blasted a recording of babies and children crying.

And as people walked down Pennsylvania Avenue, past the Trump International Hotel, protesters shouted “Shame!” and booed. 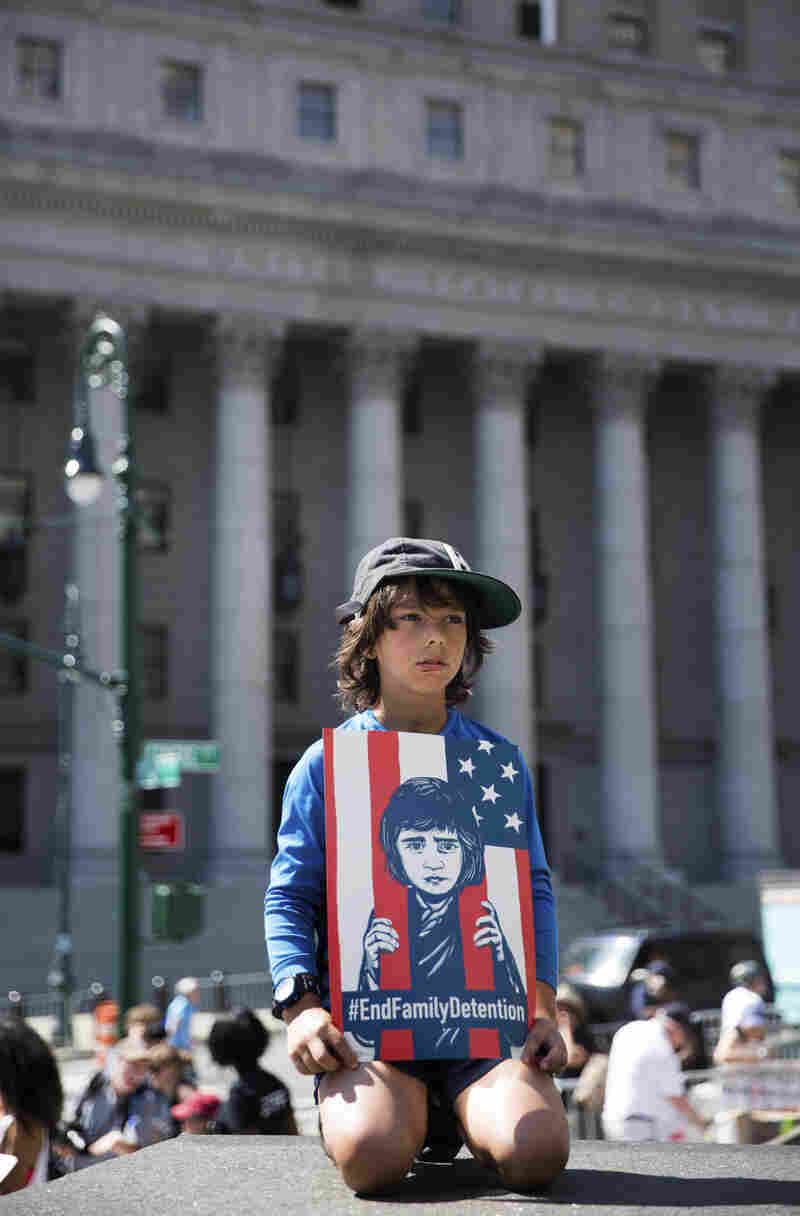 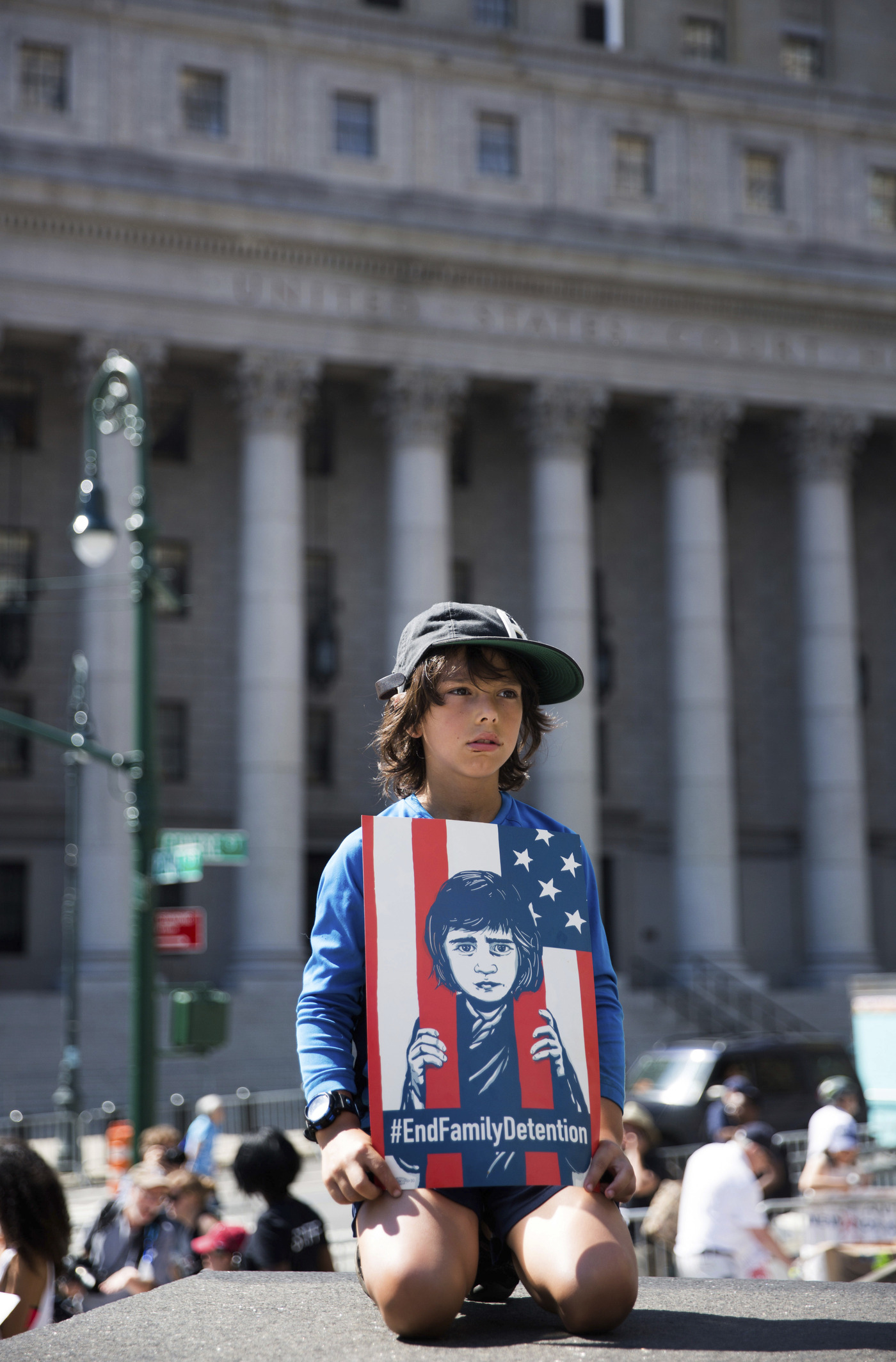 A young child holds a sign during the rally to protest the Trump administration’s immigration policies Saturday, June 30, 2018, in New York, New York.

A roster of celebrities and politicians spoke, echoing a national cry among protesters to end Trump’s “zero tolerance” immigration policies and immediately reunite families who were separated at the border.

Alicia Keys brought her 7-year-old son and was close to tears on stage as she told a sea of people, “I couldn’t even imagine not being able to find him. I couldn’t even imagine being separated from him or scared about how he is being treated. So this is all of our fight. Because if it can happen to any child, it can happen to my child and your child and all of our children.” Then she read the letter of a mother whose son was held in immigration detention.

Actress Diane Guerrero, widely known for her role on Orange Is the New Black, spoke about the deportation of her family members. “Even some 17 years later, I still remember how it felt when I first cried out for my parents and they couldn’t answer.”

Lin-Manuel Miranda, creator of the Broadway musical Hamilton, performed a lullaby that he had written, telling the crowd it was for parents and children who had been torn apart. “We’re not going to stop until [parents] can sing them to their kids again,” he said, before singing, “You will come of age with our young nation. We’ll bleed and fight for you. We’ll make it right for you.”

The stage was not just reserved for adults. Children shared their messages of pain and compassion with the crowd. “I wish I could give you a big hug,” a young girl read from a letter she wrote. 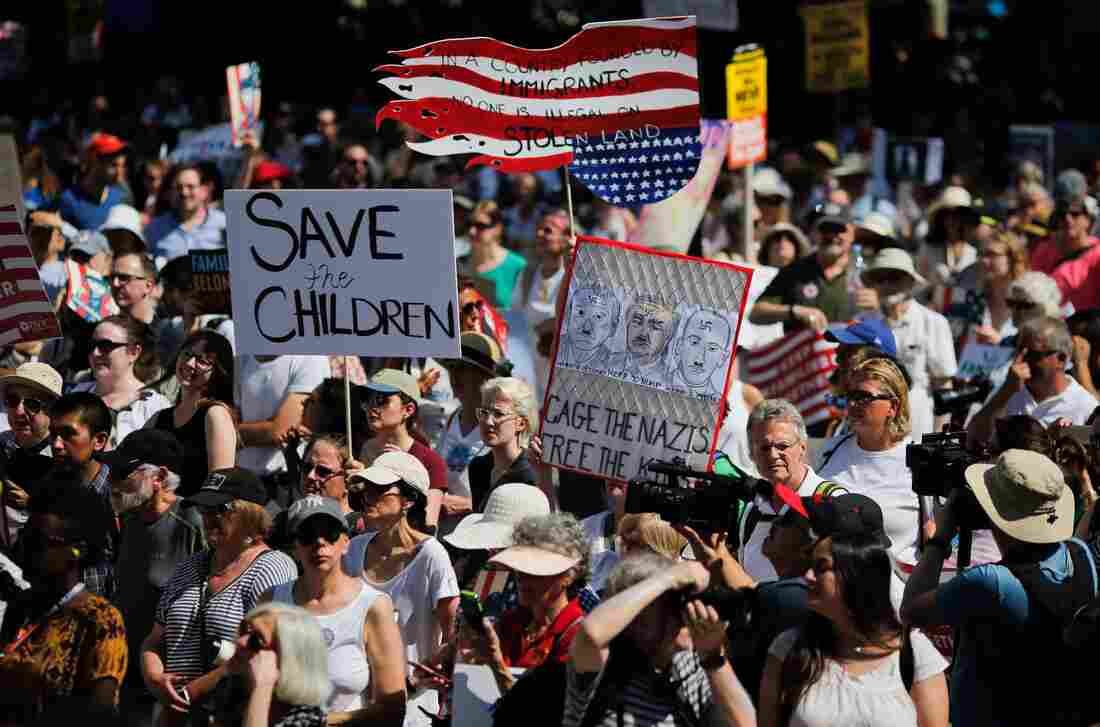 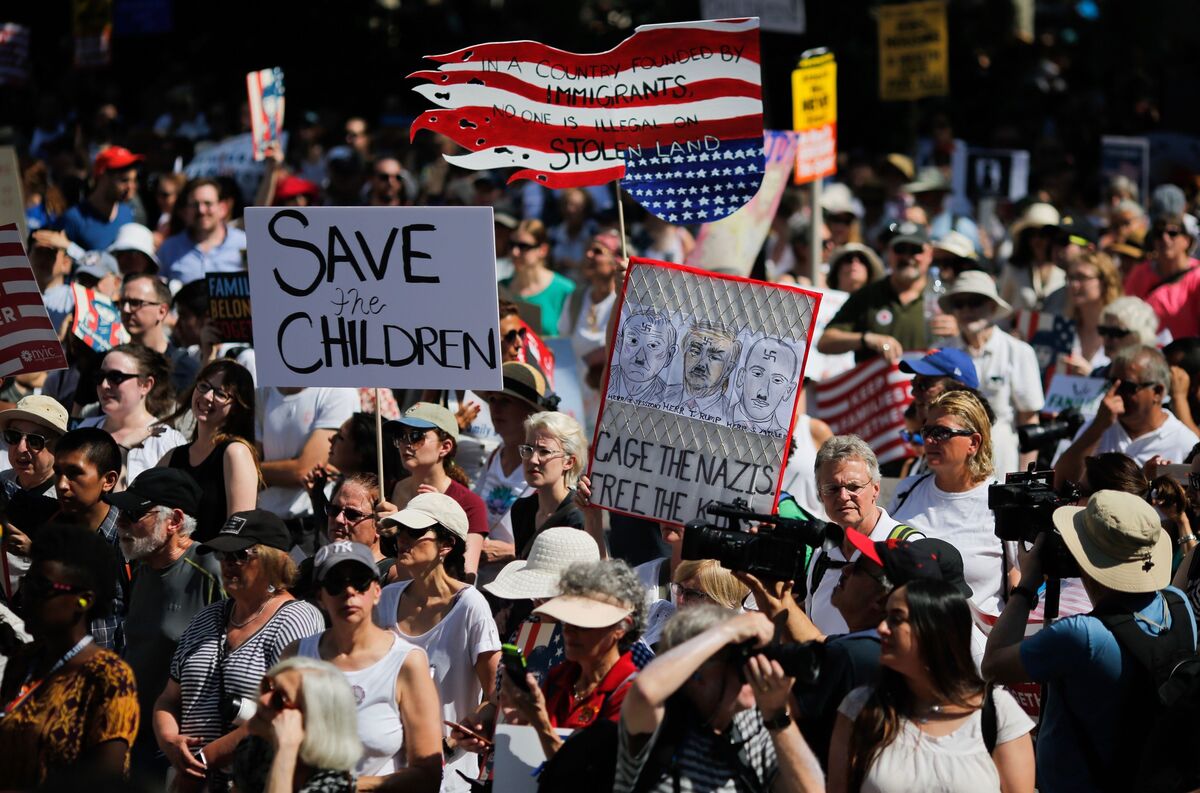 Demonstrators march against the separation of immigrant families, on June 30, 2018 in New York.

At Boston City Hall Plaza, Sen. Elizabeth Warren deplored the president and Immigration and Customs Enforcement as an agency. “President Trump seems to think that the only way to have immigration rules is to rip parents from their families, is to treat rape victims and refugees like terrorists and to put children in cages. This is ugly. This is wrong. And this is not the way to run our country.” She called for ICE to be replaced by “something that reflects our morality and that works.”

In California, Sen. Kamala Harris crafted a speech around the words “We are better than this,” and John Legend, from behind a piano, sang a brand new song about staying engaged: “Heaven knows I’m not helpless. But what can I do? … I can’t just sit and pray.”

In Houston, people chanted “No baby jails!” In Chicago, protesters marched to the ICE’s field office and erected tents. In New York, demonstrators on the Brooklyn Bridge chanted “Shame!” In Atlanta, someone carried a cage with baby dolls inside.

Around 4 a.m., before Saturday protests officially started, Trump tweeted from his golf club in New Jersey: “To the great and brave men and women of ICE, do not worry or lose your spirit. You are doing a fantastic job of keeping us safe by eradicating the worst criminal elements. So brave!”

He added later in the day, “When people come into our Country illegally, we must IMMEDIATELY escort them back out without going through years of legal maneuvering. Our laws are the dumbest anywhere in the world.”

Protesters in Bedminster congregated near his golf club with signs and costumes.