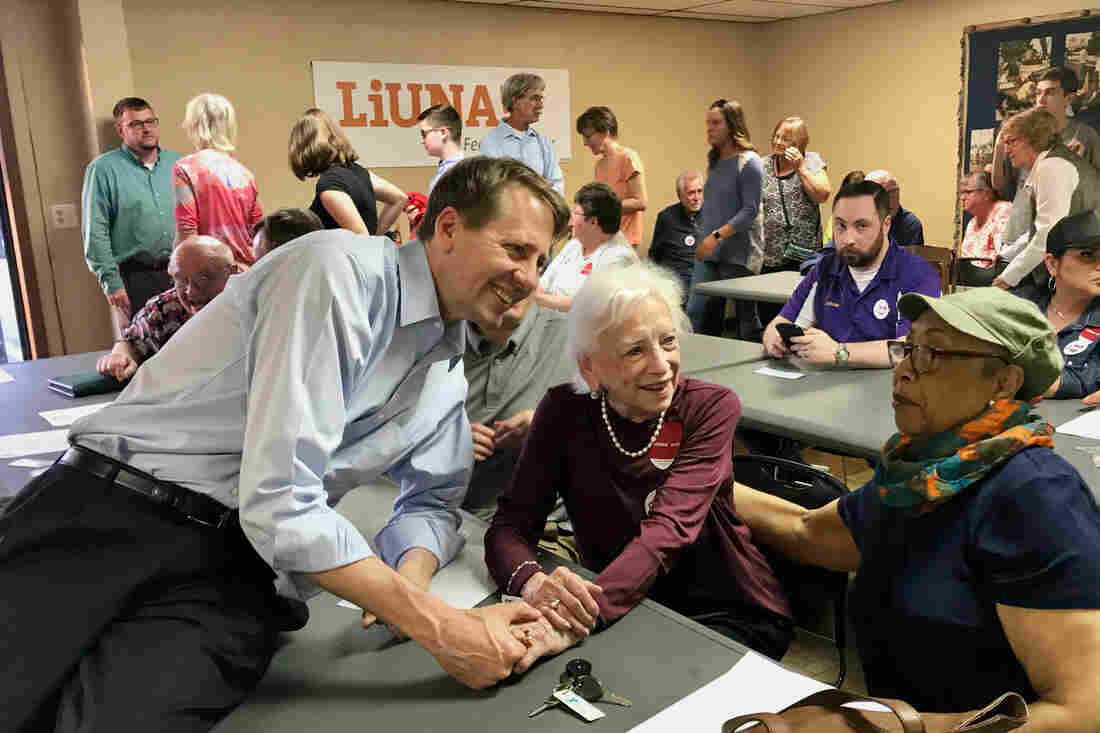 Rich Cordray has a 2-1 lead over Dennis Kucinich, but 41 percent of the likely Democratic primary voters say they still haven’t made up their mind. M.L Schultze/WKSU hide caption 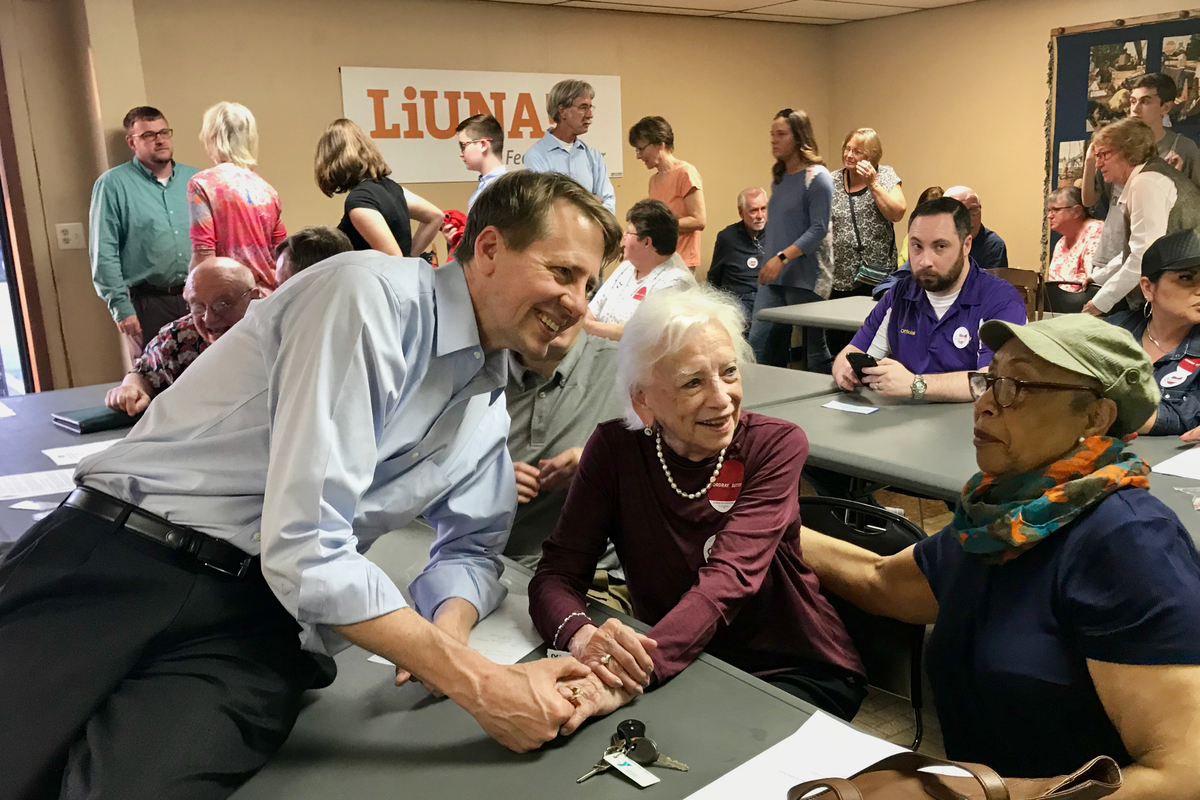 Rich Cordray has a 2-1 lead over Dennis Kucinich, but 41 percent of the likely Democratic primary voters say they still haven’t made up their mind.

Rich Cordray steps into the Laborers Local 574 hall in central Ohio. The hall is small – a dot of blue voters in the sea of red that is rural Ohio. Cordray was expected to be the unbeatable candidate in Tuesday’s Ohio Democratic gubernatorial primary.

The former head of the Consumer Financial Protection Bureau has name recognition and Democratic street cred for once being dissed by President Trump.

But then came Dennis Kucinich, the late entry into the race. This former mayor, congressman and presidential candidate is a liberal firebrand — and now there is friction among Ohio Democrats.

In the hall, about 50 people nod and clap as Cordray talks about government working for people, tuition-free community college, and the charter school and payday lending scandals swirling around state Republicans.

But the first question he’s asked has nothing to do with any of that. Through much of his career, Rich Cordray had an A+ rating from the National Rifle Association. Dan Giles, a voter from the audience, asks Cordray, what is he going to do about gun violence?

“We have a problem of gun violence in our society. I think any thinking person recognizes that, with the school shootings and the community shootings around the country,” says Cordray. “We need to find practical steps that will reduce the violence and save lives.”

Giles leaves the meeting undecided. “I wanted to get something from the heart and I didn’t hear that,” he says. 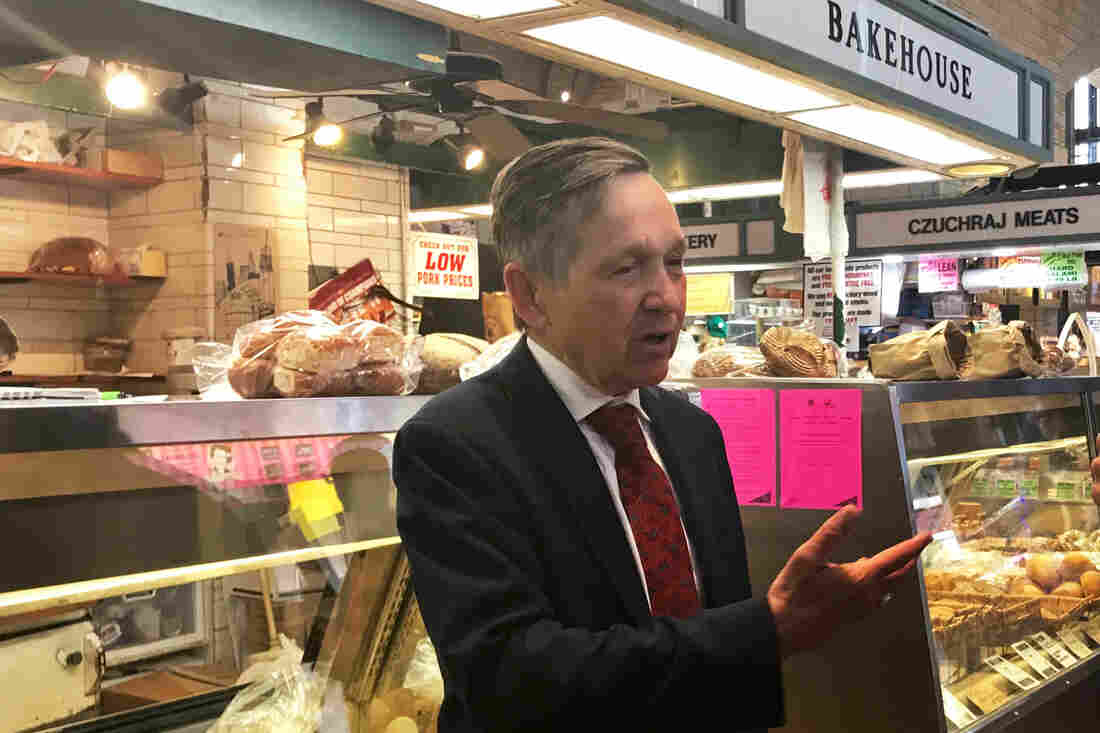 Dennis Kucinich greets voters at the West Side Market in Cleveland, Oh. He surprised voters, and his opponents, with his late candidacy for Governor. M.L Schultze/WKSU hide caption 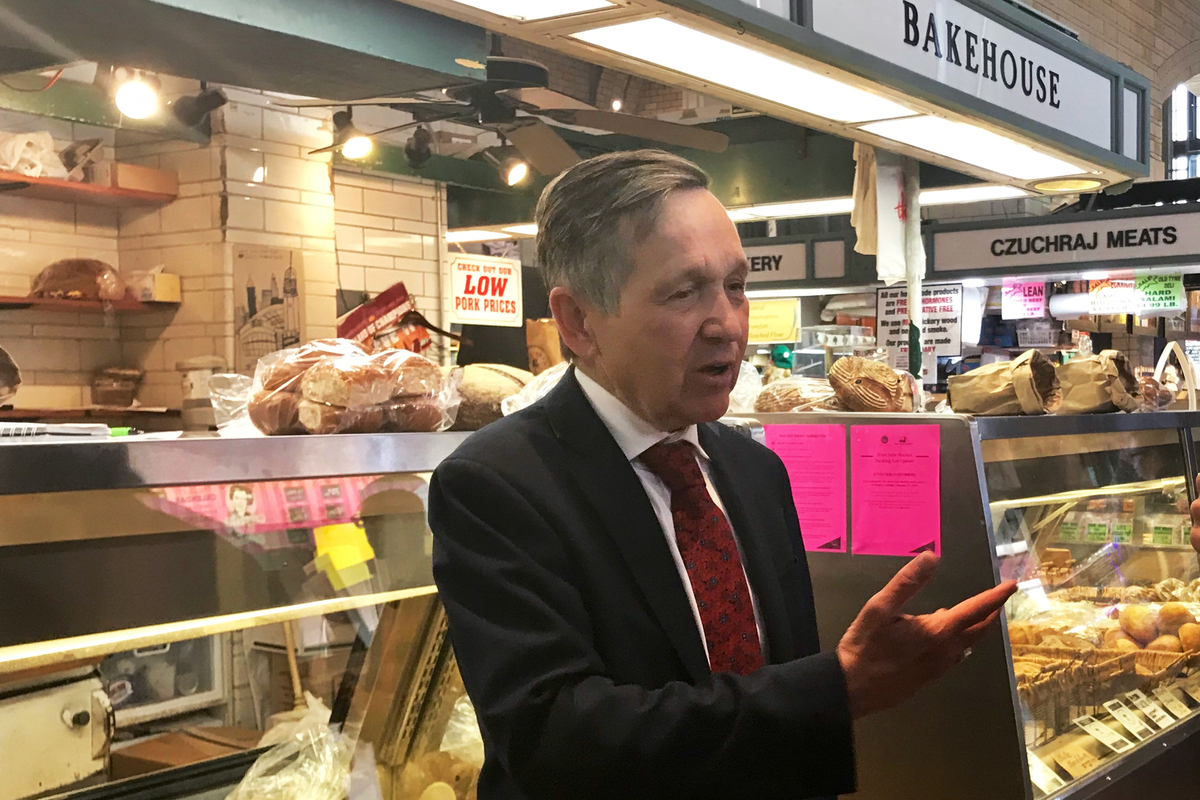 Dennis Kucinich greets voters at the West Side Market in Cleveland, Oh. He surprised voters, and his opponents, with his late candidacy for Governor.

Kucinich, in contract, has an F rating from the NRA. “And I’m proud of it,” he says. “It represents the fact that I’m politically independent.”

He wants to ban assault-style weapons in a state that has loosened gun laws more than a dozen times. He’s now 71-years-old but still looks like the boy-mayor of Cleveland he was 40 years ago. A Baldwin Wallace University poll out less than a week before Election Day shows that 41 percent of Democratic voters still have not made up their mind.

All of that aligns Kucinich with Sen. Bernie Sanders’ wing of the Democratic party, but a number of Ohio Democratic insiders fear Kucinich would alienate Independent voters who are crucial for a Democratic win in November. Liberal vanguard Sen. Elizabeth Warren is one of Cordray’s biggest backers.

Both candidates are progressive, says Sarah Poggione, a political scientist at Ohio University, meaning the biggest difference between them for voters may actually be their personalities. Where Cordray is cerebral and detailed, Kucinich is, “more fiery, a little bit less polished in some ways.”

And Kucinich has come under attack for his stint as a Fox News analyst, his call for President Obama’s impeachment and his visits with Syrian dictator Bashar al Assad – which he says were part of his effort to achieve world peace.

It’s unclear how much any of that means to voters in a state struggling with an opioid crisis and uncertain economy. What’s clear is that many voters are still looking for clues before Tuesday’s election.