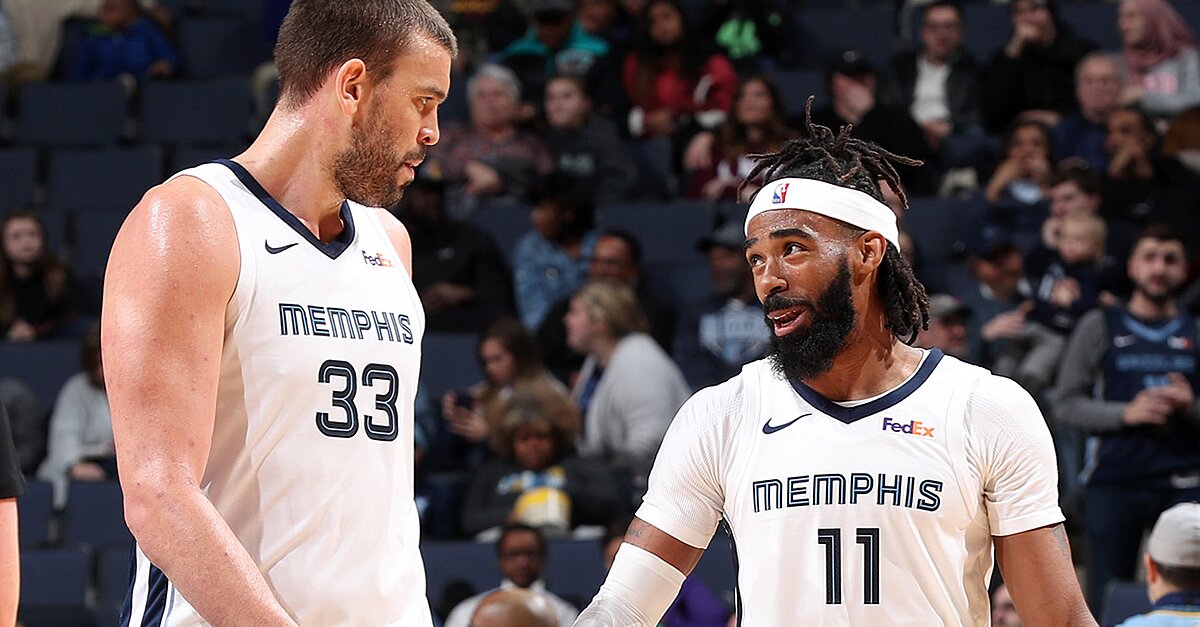 It almost hurts to state so matter-of-factly, but the reality that the Memphis Grizzlies spent the better part of four years trying to delay has arrived. Brought down by injuries, attrition and a series of frustrating personnel decisions (and just one win in their last 14 games), the 19–29 Grizz have begrudgingly begun hearing trade offers for Mike Conley and Marc Gasol, inarguably the two most important players in franchise history. The team that famously ripped off three 50-win seasons and a series of enjoyable playoff runs is long gone, and Memphis faces an uncertain future.

The silver lining for the Grizzlies is that rebuilding—and more importantly, selling a fanbase on starting over—is much easier with a bird in hand. After striking gold with Jaren Jackson Jr. in the 2018 draft, Memphis will be able to tailor its decision-making accordingly, shaping a new timeline around a 19-year-old with a chance to be a legitimate foundational piece. Given the ongoing slow-motion-car-crash nature of the Grizzlies’ descent, it’s fair to wonder whether general manager Chris Wallace deserves to be the person charting the course, but that can be tabled until the offseason. For now, let’s consider some potentially feasible trade scenarios and the thinking behind them.

MANNIX: Why Did the Grizzlies Wait So Long to Test Market on Conley-Gasol?

The easier player for Memphis to move will be Conley, who turns 32 this fall. Despite making north of making north of $30 million annually through 2020-21 (he has a player option for that season), Conley has more or less been his usual self, and has the chops to help put the right playoff team over the top, at least in theory. Trading for him means inheriting long-term money, but it also means adding a borderline All-Star at the back end of his prime and stabilizing the point guard position for a few years. If you’re a playoff team with some urgency to win and stay competitive, particularly one in a smaller market, adding Conley has to at least become a value proposition. One hypothetical:

This isn’t to say New Orleans should go all in like this, but if they are intent on sending a message to Anthony Davis, this move would be a starting point. Adding Conley lets Jrue Holiday move off-ball more, as he did last season, and adds a real distributor to the mix. While they’d be giving up a first, protections can help couch the value of the pick over the next couple seasons, and a structure like this also gets New Orleans out of Hill’s money. Losing Randle hurts, but he’s not an ideal fit with Davis, and the Pelicans would make this move trying to position themselves better out of the gate next season to keep their star satisfied.

For Memphis, adding a young, established player (Randle), a veteran on a movable contract (Moore) and the prospect of a first-rounder to offset the one it currently owes Boston is a fairly useful haul. Although Randle has an opt-out, if Memphis thinks it can re-sign him as a piece, he wouldn’t be an awful pickup, and adding the pick is really the key here. It’s not perfect, but it’s not crazy.

In this sort of structure, Memphis doesn’t add a first-round pick, but ostensibly get one in Smith, who does come with a degree of upside on a rookie deal and directly replaces Conley. With Smith unsettled in Dallas, bringing him in as a long-term partner for Jaren Jackson is a reasonable play for Memphis, who would also net future cap relief with Matthews’s expiring. Powell is a workable rotation guy with an option for next season. If the Mavericks were to view Conley as a stronger partner for Luka Doncic and thought they could add a free agent or two over the summer, something like this would be a decent win-sooner-than-later decision. It wouldn’t be enough to get them over the hump this year, but having Conley in hand along with some cap space doesn’t hurt.

SHAPIRO: NBA Trade Deadline Preview: Players Who Could Be on the Move

It would be hard for the Grizzlies to demand a future first-rounder, given that Smith is just 21-years-old, but this type of framework that creates flexibility and returns legitimate talent is still conducive to their rebuild. How much Memphis can really ask for depends on the market for Conley, of course, but at this point, a young player, a pick or, better yet, a combo of both would be worth moving for.

On the other hand, Gasol will be much harder to trade. He turns 34 next week and is in decline physically and production wise, making him of value only to teams currently playing for something. That, coupled with how many teams are set at center in a smaller-leaning league, reduces the number of takers. He also holds a $25 million option for next season, and Memphis loses leverage with the twin possibilities of A) Gasol leaving them for nothing over the summer and B) the fact he could opt in and eat cap room wherever he might end up. He is the more urgent player to trade, but also far more difficult to suss out when it comes to what a reasonable return might be. He is more or less a depreciating asset. Here’s one idea:

Admittedly, it would be entertaining to see Marc and Pau traded for one another again under very different circumstances. The Spurs are a team that still values playing multiple bigs, and Marc Gasol’s skill level and overall effectiveness is an upgrade over his brother, who has mostly come off the bench this season in San Antonio. Marc is owed more money than Pau through 2020, but also probably stands a better chance of generating a return on his salary number. San Antonio has the guard depth to deal Belinelli and an extra pick with Toronto’s first, which will convey this year and end up a selection somewhere in the late 20s. The Spurs are back in playoff position, but are in the thick of a tight race, and upgrading their rotation up front for this year and next might be worth dealing that draft choice. Gasol and LaMarcus Aldridge wouldn’t exactly be a mobile pairing, but would certainly create problems for opposing defenses.

Something like this might be the best Memphis can do when it comes to dealing Gasol (and bringing back Pau for a farewell tour does have a certain value when it comes to business optics). At a glance, there just aren’t a ton of teams that should be leaping to add a guy like him on a contract that significant. If the Grizzlies are intent on getting a draft pick back for him, they might also have to eat a bad contract as a makeweight. On paper, there just aren’t many teams that need Gasol badly enough to flip much of substance.

These trade returns might be underwhelming for players who are still among the better options at their respective positions, but it’s a byproduct of the fact Memphis waited such a long time to try and move them. The Grizzlies have two weeks to play their hand and create a market. If they can nab an asset or two for each guy, tank as hard as possible and keep their top-eight protected pick away from Boston (that much now seems like a foregone conclusion), they could certainly end up in a reasonable place going forward. But, like much of what’s gone down in Memphis of late, there’s not a ton of reasons to feel confident, either. The trade deadline is Feb. 7.