Cristiano Ronaldo was Portugal’s hero in their World Cup opener against neighbours Spain, as the Real Madrid forward’s three goals cancelled out a Diego Costa brace and an early contender for goal of the tournament from Dani Cravajal’s replacement Nacho.

Following a plethora of distractions ahead of Group B’s clash between Portugal and Spain, including a mass exodus of players at Sporting CP, Julen Lopetegui’s sacking as Spain manager, and Cristiano Ronaldo’s tax evasion sentencing, the Iberian derby was certainly poised to be an interesting affair.

Portugal opened the match the stronger of the two sides and they got their just rewards when they won a penalty inside the opening three minutes after Nacho brought down Ronaldo.

Cristiano Ronaldo stepped up to take and, like the seasoned professional he is, showed no nerve as he calmly sent David de Gea the wrong way to give Fernando Santos’ men an early lead.

Spain had the opportunity to respond to Portugal’s early opener before the 10 minute mark, with a good spell of attacking play resulting in a chance falling to Manchester City’s David Silva however, he could not take the chance, firing over the bar and wasting La Furia Roja’s first big chance of the match.

Despite the early setback, by the 15 minute mark Spain had begun to impose themselves on the match and begin to look confident in possession and in control of the game, passing the ball about with real purpose and making their opposition work to win the possession back.

Once again Ronaldo found himself in a goal scoring opportunity, after a wild Sergio Busquets tackle on Goncalo Guedes won the Selecao das Quinas a free kick on the right-hand corner of the box, but the Real Madrid forward smashed his shot straight at the wall.

Quickly following the free kick, Portugal shirked yet another chance when an electrifying counter petered out on the edge of the box with a series of passes promptly being dealt with.

Subsequently, the Quinas would be made to pay for wasting so many opportunities, with Spain launching counter of their own, getting the ball forward to Diego Costa who gladly converted from the edge of the box, making it 1-1 and bettering his record of zero shots on a target in Brazil in 2014.

Quickly following their equaliser, Spain came inches from taking the lead after a venomous long range effort from Isco crashed off the underside of the bar and bounced off the line, no goal was given and Portugal were able to take a big sigh of relief.

After conceding it was clear that Portugal were shaken up and Spain were intent on taking advantage, after squandering a promising free kick opportunity, Fernando Hierro’s men came close to scoring once again when a deflected effort from 2010 World Cup winner Andres Iniesta made its way just wide of the post. 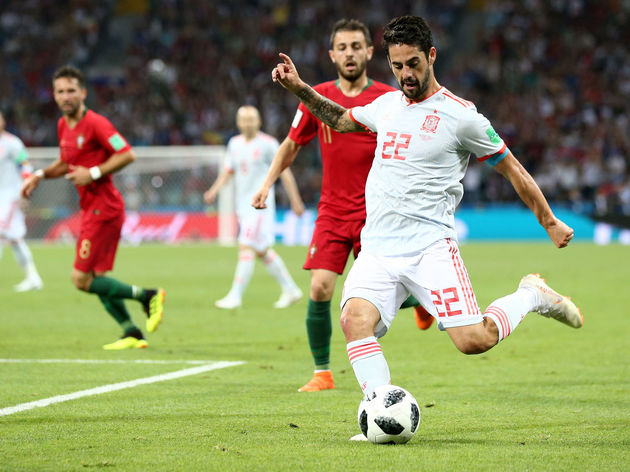 Just as the game looked as though it was starting to calm down before the half time whistle, Ronaldo popped up with his second goal of the match following an uncharacteristic, but nonetheless egregious error from De Gea.

Following a weak volleyed effort from the Portuguese forward, De Gea got behind the ball, only to watch the ball bobble over his arms and into the net, seeing the first half end 2-1 to Portugal.

Following the resumption of the match things took a little while to get going again, with Spain enjoying much of the possession, although not doing much of note with it. That changed on the 55th minute when Iniesta won a free kick.

A well worked set piece saw the ball worked around the back of the Portugal defence and played across the face of goal for a grateful Costa to poke home to notch his second of the match, seeing the game spark back to life and level the scores out at 2-2.

Just as they did after their opener, Spain really took the game by the scruff of the neck, this time letting their dominance show as an impressive attacking display culminated in a ferocious half volley from Nacho, the full back’s shot curling magnificently into the bottom corner, crashing against the post and firing into the side netting to hand the Spaniards the lead for the first time in the match.

After making it 3-2 Spain continued to exercise their dominance on the game, with Portugal being forced to weather attack after attack, it began to look as though Hierro’s men could make this a bit of a rout.

Costa came close to completing his hat trick on the 70 minute mark, with a well worked move falling to the Atletico Madrid man, although he fluffed his lines and his effort was dragged past the post, much to the relief of Rui Patricio.

It took a while before Portugal found themselves another opportunity, and when it fell to substitute Ricardo Quaresma, the Besiktas man was unable to convert. Despite his shot being a decent effort from a tight angle, his shot taken with the outside of his foot flew safely over the bar.

Following Qauresma’s effort, Portugal came close to bringing the scores level once again after Ronaldo managed to hook the ball over De Gea, only for Gerard Pique to close the ball down and prevent the Quinas from pulling level.

Just when Portugal’s hope of salvaging a result seemed lost, Ronaldo stepped up to an enticing free kick on the edge of the area, proceeding to do what he does best, the 33-year-old forward hit a sweetly struck effort into the top corner, leaving De Gea rooted to the spot an making the score and astounding 3-3 and completing his hat-trick for the night.

Invigorated by Ronaldo’s equaliser, Portugal pressed Spain right to the end, looking for an elusive winner, although it never came and, following a breathless, full on affair, the match ended 3-3, setting an early contender for game of the tournament.