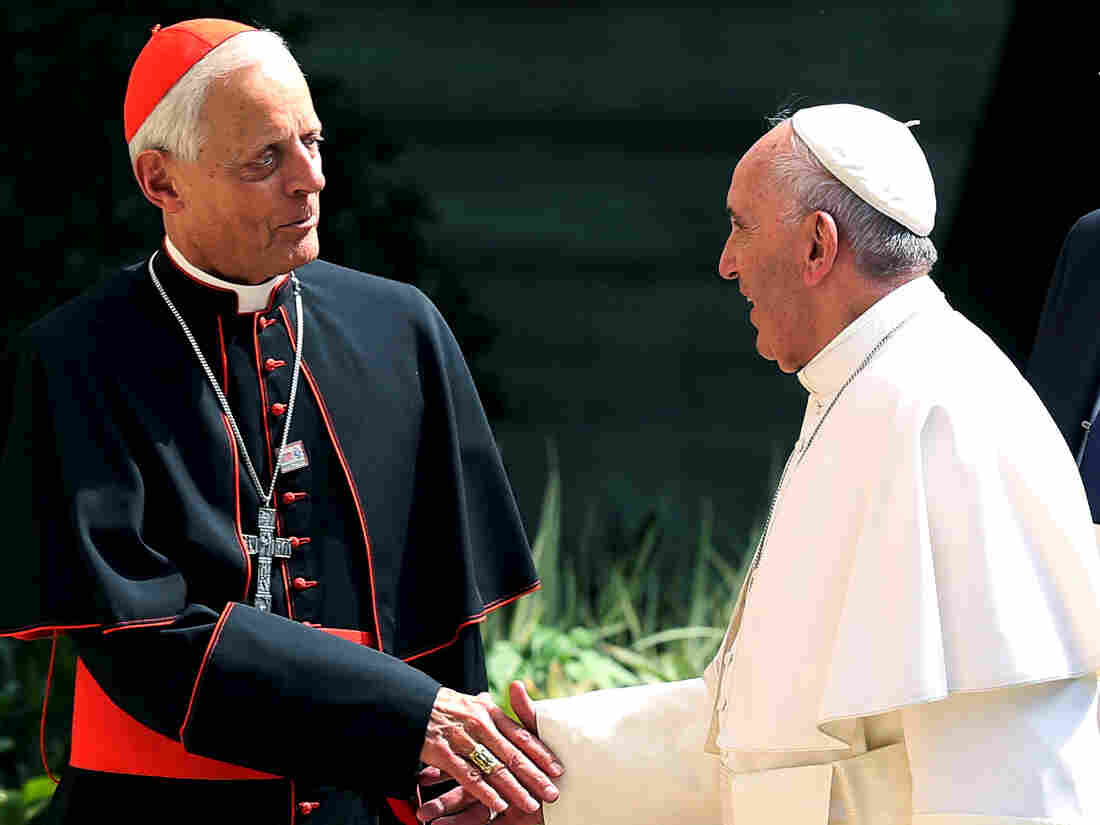 Pope Francis has accepted the resignation of the Archbishop of Washington, Cardinal Donald Wuerl. The two are seen here during the pope’s visit to Washington, D.C., in 2015. Gary Cameron/Reuters hide caption 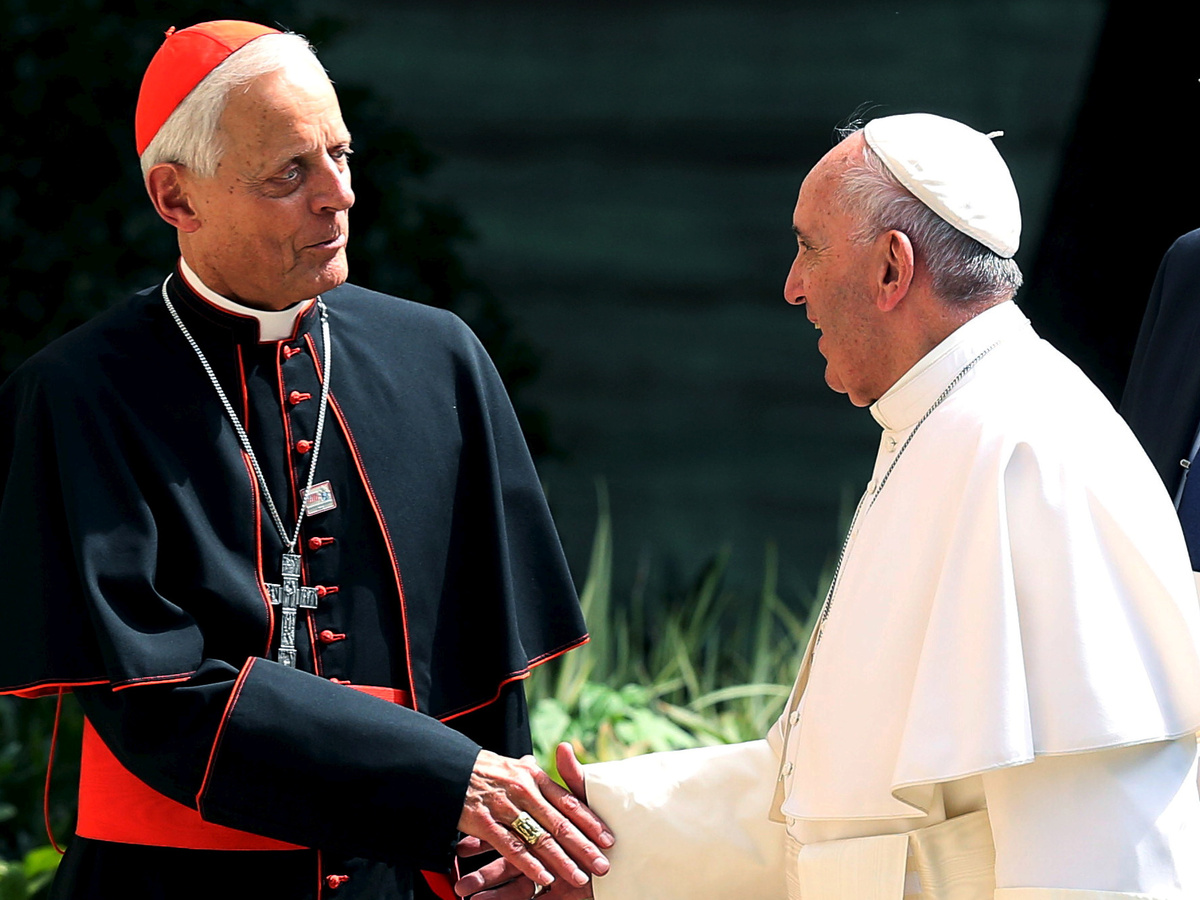 Pope Francis has accepted the resignation of the Archbishop of Washington, Cardinal Donald Wuerl. The two are seen here during the pope’s visit to Washington, D.C., in 2015.

Pope Francis has accepted the resignation of Cardinal Donald Wuerl, the archbishop of Washington, D.C., who has been accused of covering up sexual abuse scandals during his tenure as the bishop of Pittsburgh.

Victims of sexual assault and others have long called for Wuerl to resign – and those calls recently grew louder, after a grand jury produced an exhaustive and shocking report that described the crimes of 300 “predator priests” in Pennsylvania, some of whom were under Wuerl’s supervision.

Wuerl served as the bishop of Pittsburgh from 1988 through 2006; his name was repeatedly mentioned in the grand jury’s 900-page report, accusing him of moving abusive priests between parishes and not informing other church leaders when accused priests were moved into their territories.

Wuerl’s resignation comes nearly two months after he met with Pope Francis at the Vatican to discuss his place in the church.

Ahead of that meeting, Wuerl had sent a letter to priests in his archdiocese saying he would ask the pope to accept his resignation. It became clear, he wrote, “that some decision, sooner rather than later, on my part is an essential aspect so that this Church we all love can move forward.” As is customary for bishops who turn 75, he had submitted a formal resignation three years ago.

In September, the grand jury report’s revelations prompted a member of the clergy at the Cathedral of St. Matthew the Apostle, the seat of the Catholic archdiocese in Washington, to issue an open letter to Wuerl, calling for him to resign.

Deacon James A. Garcia wrote to Wuerl, “the time for cowardice and inaction is long past,” adding, “no amount of apology will suffice unless and until bishops and other complicit clergy resign.”

Here’s how Garcia described his rationale for asking Wuerl to step aside, in an interview with NPR’s Michel Martin last month:

“As I wrote in my letter to the cardinal, those responsible for the culture of secrecy and corruption within the church that persist to today, particularly those men who are responsible for leadership of the church – that is, the bishops – the time has come for them to act with courage and humility. And I can’t speak to Cardinal Wuerl’s particular level of culpability. But I think what we face in the church today, and have for quite some time, is a crisis of leadership.

“I think we’ve reached a point in time where immediate and dramatic action is necessary. And that’s why I chose to implore the cardinal to, for the good of the church, relinquish his position as archbishop.”

In one of the most egregious cases cited in the grand jury report from August, Wuerl was found to have returned the Rev. George Zirwas to the ministry even after the Diocese of Pittsburgh received complaints that Zirwas had sexually assaulted several boys. After reviewing confidential files and hearing victim testimony, the Pennsylvania grand jury reported that Zirwas was one of several “predatory priests” in the Pittsburgh area who raped children and took pornographic pictures of their victims.

Zirwas was put on a leave of absence in 1995 and subsequently moved to Cuba, where he was murdered in 2001. Wuerl presided over his funeral, noting that “a priest is a priest. Once he is ordained, he is a priest forever.”

A spokesman for Wuerl acknowledged that “based on today’s knowledge and experience, this [Zirwas] case would have been dealt with differently.”

In several other cases in which priests were accused of sex abuse, Wuerl sent them for psychological evaluation but allowed them to remain in the priesthood or approved payments to them for “sustenance” and medical coverage. The grand jury did acknowledge that Wuerl on one occasion demanded that an abusive priest be stripped of his status, even after the Vatican ruled otherwise.

In a statement issued in response to the grand jury report, Wuerl claimed that on balance, it showed that, as Pittsburgh’s bishop, he acted “with diligence, with concern for the victims and to prevent future acts of abuse.”

“When you read the nearly 200 times Donald Wuerl was mentioned in the report,” Shapiro said, “you will see that his conduct was absolutely abhorrent. … Cardinal Wuerl is not being truthful and forthright. Many of his statements in response to the grand jury report are directly contradicted by the church’s own documents and records from their own secret archives.”

In the days following the release of the grand jury report, nearly 60,000 people signed a petition demanding that Wuerl resign as Washington’s archbishop. A Catholic publisher “indefinitely” postponed the release of his new book, which carried the somewhat untimely title What Do You Want to Know? A Pastor’s Response to the Most Challenging Questions about the Catholic Faith. A Pittsburgh-area high school named for Wuerl announced it would change the name, reportedly at Wuerl’s own request.

Wuerl was appointed archbishop of Washington by Pope Benedict XVI in 2006, replacing Cardinal Theodore McCarrick, and he was elevated to the College of Cardinals in 2010. McCarrick resigned in disgrace from the College of Cardinals in July, responding to “credible and substantiated” allegations of sexual misdeeds and to revelations that two dioceses in New Jersey had made financial settlements with priests who alleged McCarrick abused them sexually when they were seminarians.

Wuerl insisted he was unaware of McCarrick’s settlements, but his detractors questioned whether that was believable. Wuerl faced further criticism when he appeared to downplay the significance of the McCarrick scandal.

“I don’t think this is some massive, massive crisis,” Wuerl told Salt and Light Catholic Media Foundation. He later clarified that he did view McCarrick’s situation as presenting “a very grave moment” for the Catholic Church but that he thought the church could overcome it.

Wuerl has been largely popular during his 12 years as Washington’s archbishop. A confidant of Pope Francis, he was seen as one of the more liberal U.S. bishops and a strong advocate for social justice and tolerance.

“I think he’s been a very good bishop for the Archdiocese of Washington,” said Patricia McGuire, president of Trinity Washington University, a Catholic women’s school, in an Aug. 21 interview with NPR member station WAMU. McGuire nevertheless called for Wuerl to resign. “That’s not because he’s particularly culpable in any way,” she said. “I think he’s tried very hard to do the right thing. But the leader needs to make the big statement about how we’re going to get past this moment, and that would be a really big statement.”

In his high-profile posts in both Pennsylvania and Washington, Wuerl followed in the footsteps of men who resigned under sharp criticism. In Washington, he succeeded Cardinal McCarrick. And in Pittsburgh, a grand jury said his predecessor, Bishop Anthony Bevilacqua (later the archbishop of Philadelphia), had protected priests who had abused minors.