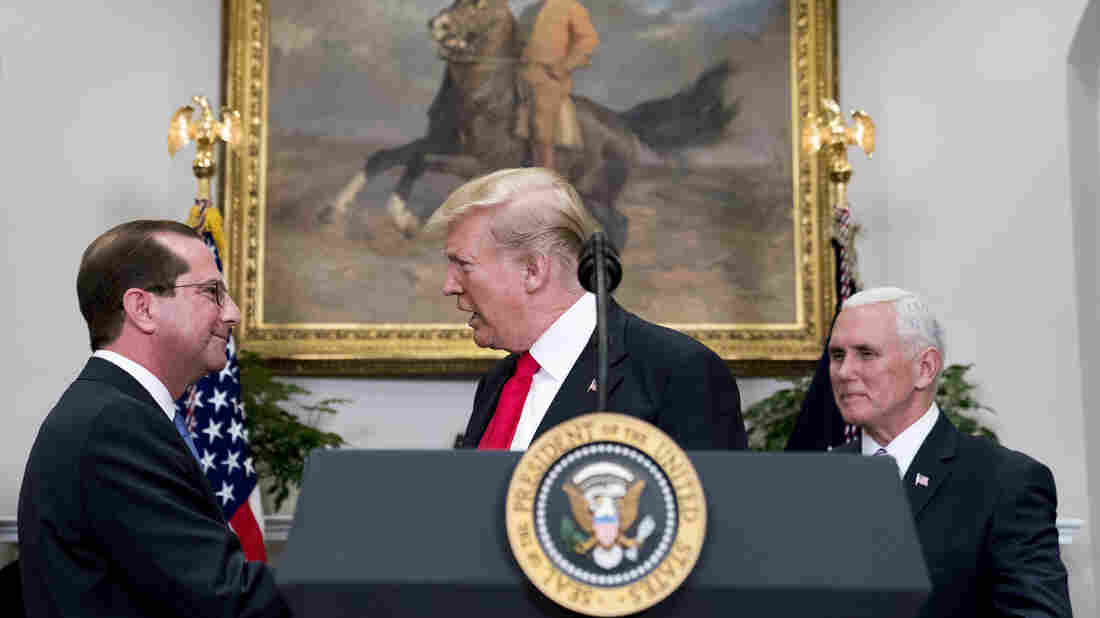 President Trump shakes hands with Health and Human Services Secretary Alex Azar after he is sworn in by Vice President Pence on Jan. 29. Major reproductive health organizations are voicing concerns about the Trump administration’s new approach to federal family-planning grants, which may reduce the role of Planned Parenthood and place greater emphasis on “natural family planning.” Andrew Harnik/AP hide caption 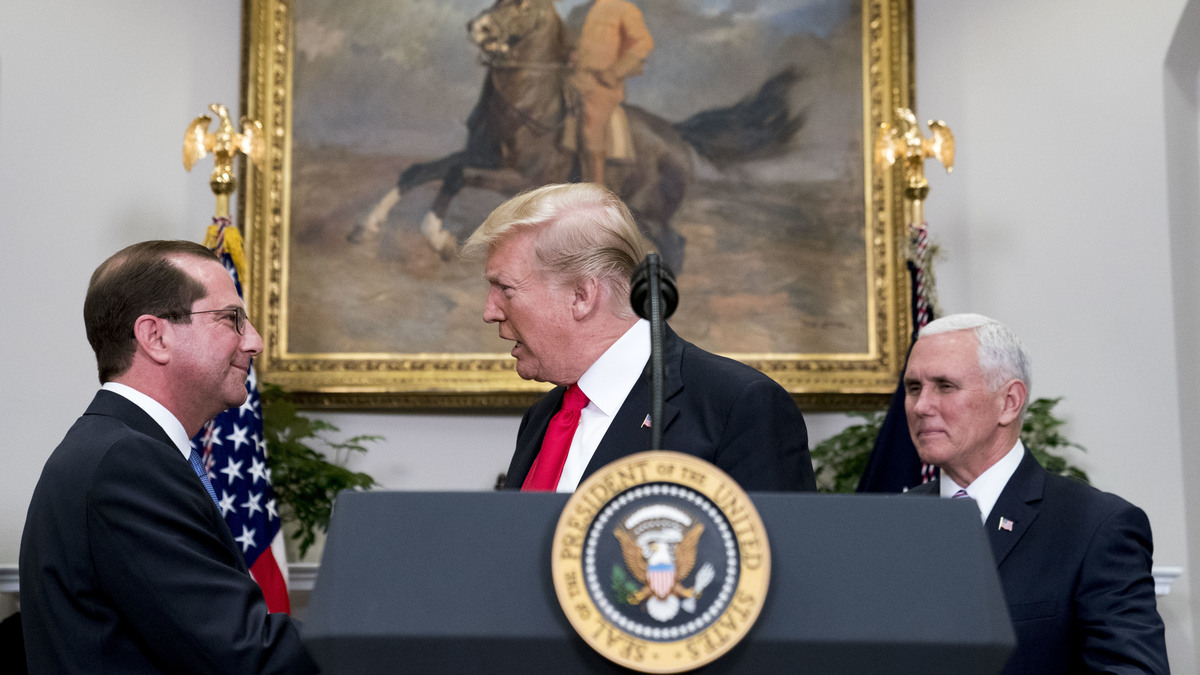 President Trump shakes hands with Health and Human Services Secretary Alex Azar after he is sworn in by Vice President Pence on Jan. 29. Major reproductive health organizations are voicing concerns about the Trump administration’s new approach to federal family-planning grants, which may reduce the role of Planned Parenthood and place greater emphasis on “natural family planning.”

Three national reproductive rights groups are suing the Trump administration, arguing that changes to the federal Title X program will put the health of millions of low-income patients at risk by prioritizing practices such as the rhythm method over comprehensive sexual health services.

The two lawsuits being filed on Wednesday — one by Planned Parenthood and another by the National Family Planning & Reproductive Health Association and American Civil Liberties Union — focus on guidance issued in February by the Department of Health and Human Services Office of Population Affairs.

The document, known as a Federal Opportunity Announcement, calls for a broad range of family planning services and makes multiple mentions of “fertility awareness” — also known as the rhythm method or natural family planning — but does not specifically mention contraception.

“This is a radical shift, and the way the FOA is written, it just flies in the face of the best medical practice,” said Tanya Atkinson, president and CEO of Planned Parenthood of Wisconsin, one of the plaintiffs. “It is a radical shift that could have a big impact on people’s health.”

Planned Parenthood’s lawsuit, which asks the court to block the FOA, is also being filed on behalf of affiliates in Utah and Ohio; in all three states, Planned Parenthood serves a majority of patients who receive services such as contraception and STD and cancer screenings through Title X.

Reproductive rights advocates have also expressed concerns about language in the document that talks about “the benefits of avoiding sexual risk or returning to a sexually risk-free status, especially (but not only) when communicating with adolescents” — which some see as coded language aimed promoting abstinence only until marriage, even for adult women.

Clare Coleman, president & CEO of the National Family Planning & Reproductive Health Association, in a statement to NPR called the Trump administration’s approach “disrespectful” to low-income patients and said it undermines Title X “by shifting to a narrow, ideological vision of how people should live their lives: no sex until marriage; family participation at all ages; and natural family planning methods first and foremost.”

The lawsuit comes amid continued efforts on multiple fronts by abortion-rights opponents and other social conservatives to make progress on a longtime goal of cutting federal funds to groups like Planned Parenthood that provide a range of reproductive health services, including abortion. So far, despite controlling both Congress and the White House, Republicans have been unable to do so.

Under current law, federal funding for abortion is already illegal in most situations. But abortion-rights opponents see Planned Parenthood as a major foe, given that about 1 in 3 abortions performed in the United States is provided by the organization’s affiliates.

On Tuesday, a coalition of dozens of anti-abortion-rights groups and close to 200 members of Congress sent letters to the Trump administration, asking the president to bring back a Reagan-era regulation — which opponents describe as a “gag rule” — that would prohibit organizations that received Title X funds from referring women for the procedure.

In an email to NPR, Eric Scheidler, executive director of the Pro-Life Action League, said abortion opponents are pleased with the Trump administration so far, but “many pro-life voters will feel betrayed if this doesn’t happen.”

In some Republican-dominated states, elected officials have already taken steps to cut funding to Planned Parenthood, which receives about half a billion dollars each year in public funds to provide services like contraception and STD and cancer screenings to low-income patients.

In Ohio, for example, a federal appeals court in Cincinnati recently rejected a state law signed by Gov. John Kasich in 2016; it had attempted to block federal funds received by the state from being granted to abortion providers.

Under Trump, many anti-abortion rights activists see a renewed opportunity for states to make such moves. Guidance issued early this year rolled back an Obama-era rule that had forbidden states to exclude Planned Parenthood and other abortion providers from the Medicaid program.

In an interview with NPR, Steve Aden, general counsel to Americans United for Life, called that change a “big deal” for states wishing to prevent public funds from going to organizations that provide abortions.

AUL has promoted model legislation to state lawmakers this year designed to deprioritize Planned Parenthood as a recipient of federal family planning funds.

In Tennessee, a pair of state laws recently signed by Gov. Bill Haslam aim to direct federal funds toward health care providers other than Planned Parenthood. Haslam signed legislation that instructs state officials to request permission from the federal Medicaid program to exclude organizations that provide abortions from the state’s TennCare program for low-income people. Another bill signed into law in April, which contains similar language to AUL’s model legislation, creates a tiered system in Tennessee for disbursing family planning funds that puts groups like Planned Parenthood near the back of the line for receiving those dollars.

Today, I signed new #prolife budget language into law. This provision ensures that Title X taxpayer dollars do not fund abortion services, including abortion referrals, at any clinic in Nebraska.

Texas: Revisiting federal funding — without Planned Parenthood in the mix

Under the Obama administration, Texas was excluded from receiving Title X family planning funds because of the state’s ban on public funds going to organizations that provide abortions. Now, Texas officials see an opportunity to recapture that funding while maintaining that prohibition.

In March, Texas Attorney General Ken Paxton wrote a letter to HHS Secretary Alex Azar asking the state to be allowed to receive those funds under the Trump administration:

“In light of the recent statements by … President Trump,” Paxton wrote, “… and communications that Texas officials had with members of your agency last Fall, Texans are encouraged that cooperative participation to accomplish the objectives of the Title X program, is yet again possible.”