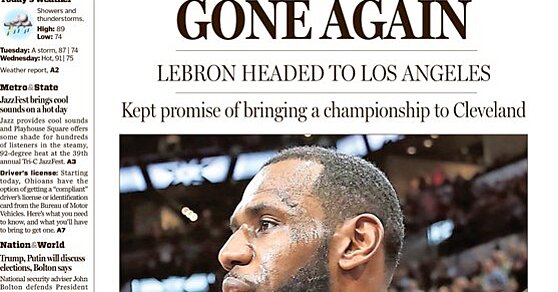 The Cleveland Plain Dealer’s front page features the headline “Gone Again” with a photo of LeBron James in the Monday, July 2nd edition after the former Cavaliers star agreed to sign with the Lakers on a four-year deal worth about $154 million.

The front page of the sports section bid adieu to LeBron James with the headline “Promise Kept.”

The promise that James kept refers to his hope of bringing a championship to Cleveland when he penned an essay with Lee Jenkins for Sports Illustrated in 2014. In the cover story, he wrote “My goal is still to win as many titles as possible, no question. But what’s most important for me is bringing one trophy back to Northeast Ohio.” In 2016, James and the Cavaliers won the NBA Finals.

Check out the front pages of the Plain Dealer below:

James announced his decision to join the Lakers through a simple press release from his agency Klutch Sports Group.