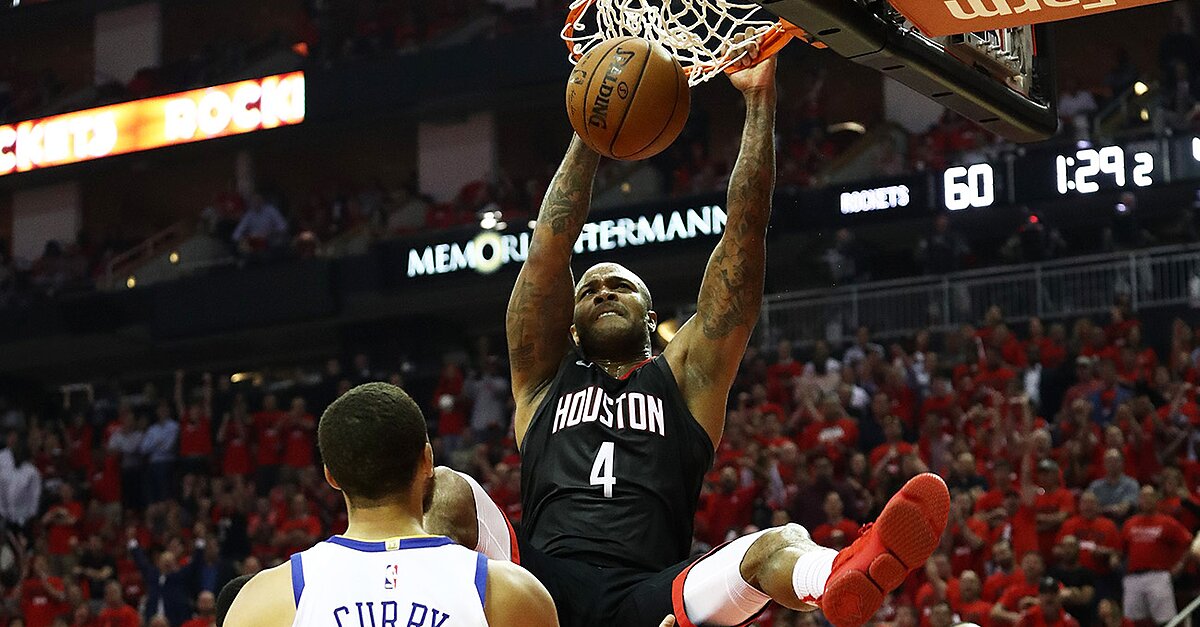 The NBA’s most anticipated playoff matchup is starting to live up to the hype. The Rockets evened up the Western Conference finals on Wednesday, blowing out the Warriors in a 127–105 win. Houston was the aggressor in Game 2, as its role players stepped up in a big way on both ends of the floor. Golden State couldn’t match its opponent’s energy, wasting another sublime performance from Kevin Durant, who scored 38 points on a series of absurd shots. The Rockets still have their work cut out for them as the series shifts to Oakland, but they showed Wednesday they won’t go down without a serious fight. Here are some thoughts on Game 2.

• The P.J. Tucker Game. Tucker was sensational Wednesday, scoring 22 points while shooting 5-of-6 from three. Tucker’s explosion from beyond the arc was exactly what Houston needed after its wing players struggled mightily in Game 1. Tucker brought his usual rugged defense and was knockdown from the corners, ensuring that the burden wouldn’t fall solely on Chris Paul and James Harden.

• Trevor Ariza, not hampered by foul trouble, also played really well. Ariza scored 19, and helped move the ball well on offense. Mike D’Antoni excised the fat from the rotation in Game 2, essentially deploying only six-and-a-half players. Luc Mbah a Moute was dropped for most of the game after he struggled to hit threes, Ryan Anderson didn’t play until garbage time and Nené didn’t play at all. But the big-time contributions from Tucker, Ariza and Gordon (who dropped 27 points on 6-of-9 from three) were more than enough. The pendulum probably swung too far into the positive for Houston after a disastrous Game 1 from the supporting cast. But if the Rockets’ wings catch fire for an extended period, they become incredibly difficult to beat.

• Durant has been unreal in the West finals. He’s again making a case for being the best basketball player on the planet. Durant scored his 38 on only 22 shots in Game 2. Houston has no answers for him. Durant is getting any shot he wants against any defender the Rockets throw at him. He was BY FAR the best player on the floor for Golden State. Stephen Curry has long been the engine that makes the Warriors go. But Durant, in this series and in these playoffs, is taking over the team.

• Conversely, Curry played really poorly for most of Game 2, and he will be hearing questions about his health for the rest of the postseason. Curry made only 1-of-8 from three, and he didn’t quite seem to have the lift in his legs needed for a playoff game of this intensity. Steph was picked on defensively, getting dropped by Paul on multiple occasions. And perhaps most shockingly, Curry never seemed to be a real threat to go off. I can’t believe I’m saying this, but Durant can’t do this alone! An injured Curry makes the Warriors mortal.

• It didn’t help matters that Curry (16) and Durant were the only Warriors to score in double figures. As well as Houston bombed away from three, the Dubs struggled. Klay Thompson scored only eight points on 3-of-11 shooting. As a team, the Warriors only hit nine of their 30 three-point attempts. The burden was too high on Durant in Game 2, but it would be shocking if Thompson, Draymond Green and Andre Iguodala all play this poorly for a second straight game.

• The small-ball matchup favored Houston on Wednesday. Both teams played extensive minutes without a center on the floor, as the Hamptons Five (Curry, Klay, KD, Dray, Iggy) squared off against the Tuckwagon lineup (Harden, Paul, Gordon, Ariza, Tucker.) Houston won those minutes in Game 2, thanks in large part to Tucker’s shot-making and a committed effort on the defensive end. The Rockets were much more energetic protecting their basket in Game 2, playing with a desperation not uncommon for teams trailing in a series. They will need that kind of sustained effort on every possession if they hope to win this series. Golden State was certainly careless, but Houston’s defense helped produce 15 Warriors turnovers. This will probably end up being the biggest inflection point in the series. If the Rockets can play the Hamptons Five to something close to a draw, their chances of winning increase tenfold.

• Houston’s offense was much zippier Wednesday night. The Rockets pounded the ball less often and initiated action much earlier than in Game 1. The pace of this game was only slightly faster than Monday’s, but Houston played with more purpose in the halfcourt. Players were cutting off the ball, the ball whipped around the perimeter and the Rockets created wide-open threes with steady dribble penetration. I thought Clint Capela would be a bigger factor for Houston’s offense, but Harden and Paul collapsing the defense by themselves created better looks than pick-and-rolls in Game 2. That will be interesting to watch moving forward.

• With the Warriors, it always comes back to how much they care. Perhaps Golden State was happy with a split in Houston. The Rockets played with a renewed energy Wednesday, and the Warriors didn’t bother matching it for a full 48. But the Dubs are nearly impossible to beat in Oakland, and Houston can’t count on a career night for Tucker and a single-digit scoring output from Thompson in every game moving forward. This series will continue to swing back and forth. Whichever team finds a way to steady itself first could gain the upper hand as the games progress.