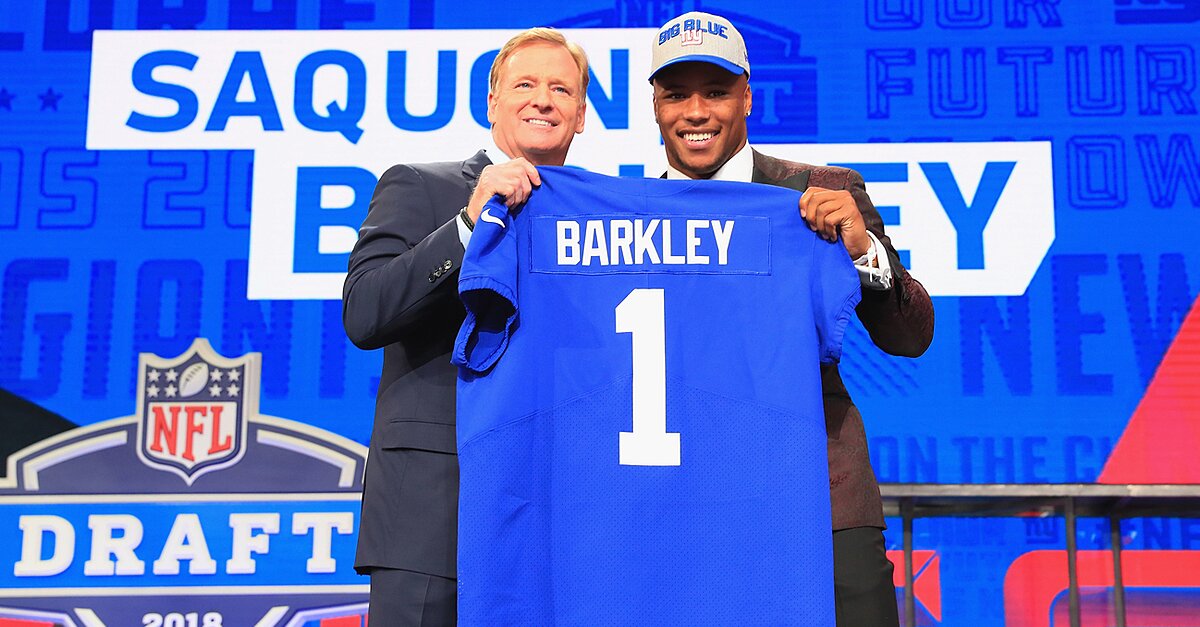 DURHAM, Pa. — I found an interesting 2018 NFL opinion Tuesday, in a pasture. Here, in this postcard of a northeastern Pennsylvania village, home of a retired Super Bowl linebacker and former NFL general manager and current NFL analyst, Matt Millen told me something that indicated he might have been the first draftnik to declare nationally what the Giants should—and would—do four months after he said it.

You may have heard of Millen’s plight. He’s likely to need a heart transplant in the coming couple of years. He’s the victim of a rare disease that took six years to diagnose, and I’ll be telling his story in the coming days at The MMQB.

But now, there was a current NFL issue that really interested Millen. Some history:

Millen did the Giants’ last game of 2017 for FOX, with Sam Rosen: Washington at the Giants, on New Year’s Eve. Two days earlier, the Giants hired Dave Gettleman to be the GM and re-invent the team, and Millen loved the hire. Still loves it, because Gettleman is the kind of meat-and-potatoes, better-be-able-to-run-the-ball team architect Millen admires. Millen, as you may know, is a Pennsylvania guy, and a Penn State guy.

“You can go back and listen to the tape,” Millen told me, in the yard of his lovely home 85 miles east of Manhattan. He’s a little weak these days, which is very unlike him, but the verve is still very much there.

“On that FOX telecast, I said, basically, ‘Dave Gettleman’s got experience. He’s been here before. He knows how to build a team. With this draft coming up, it’s a big draft. If I was them, I’d take Saquon Barkley, the running back from Penn State. He will change the offense.’

“I would like Saquon for every team. I’ve been following him, I know him, I watched him at Penn State, and he could always make you miss. I kept hearing, You gotta get rid of Eli, he’s done. Ridiculous. He had no line. He had no running game. Odell [Beckham, the wide receiver] was hurt. How do you judge a quarterback on that?

“What Dave was gonna do was fix the offensive line, which he’s done some of now, with Nate Solder [at left tackle] and the UTEP kid [Will Hernandez] in the draft at guard. Saquon’s gonna have to calm down on his make-you-miss. But his receiving is really gonna be a huge factor. He’s not to where Marshall Faulk was in the passing game yet, but he opens your offense up. He changes how a defense has to address you. Eli and [coach] Pat Shurmur can manipulate that. That’s an advantage for New York. To me, now, Eli can beat you with his arm, but he can really beat you with his head.”

Millen and I talked about how much the Giants have done in one offseason to remake their offense. Two-fifths of the offensive line, at least, will be new. The backfield will be remade with the most versatile back the Giants have had since Tiki Barber. Beckham will be back, presumably. Tight end Evan Engram, a budding star, will be much better in his second year now that Manning will have some time for him to develop his routes.

The key, to me, is Manning. If Millen is right and Manning still has it, the Giants could be playing in January, and could be threatening the Eagles for NFC East supremacy. If he’s not, the Giants better hope Davis Webb or Kyle Lauletta has something in relief.

Now for your email:

Ben Roethlisberger’s life is littered with unintelligent steaming piles. I am not surprised at another fetid comment from this coddled, abusive narcissist. By all means, Ben, retire. That act, alone, would add to the plus side of your karmic ledger.

I think Roethlisberger wishes he had a do-over on his Mason Rudolph draft comments, but I am not wishing retirement for him. He’s still a top quarterback. When he wants to go, he should go.

I don’t think it’ll ever happen, but it seems to me the best solution to the anthem dilemma is to just not play the national anthem before games (in all sports). Why is it necessary? We need to remember that these are sporting events for entertainment purposes. What does patriotism and military pride have to do with a football game? If it were up to me, perhaps it would only be played at the Olympics/World Cup/international sporting events, when it’s countries competing against other countries.

Lots of you feel exactly this way, and I could see this as a solution when the owners meet this month to discuss.

Your commentary about Jerry Richardson is, well, crazy! He should take “a couple hundred million dollars” less to make a buyer guarantee the team will stay in Charlotte to hold onto a shred of his legacy? First, as you mentioned, his transgressions against women are the reason he has to sell and rightfully so. That won’t be forgotten by most when they think of him regardless of how much he sells or doesn’t sell the team for. If the buyer of the team moves the Panthers eight years after the sale, I guarantee you nobody will think one second about Jerry Richardson being at fault for a move or his already tarnished legacy. The new owners will be responsible, 100% in the court of public opinion. So why should he take less at this point in his life?

It’s pretty simple. Jerry Richardson is 81. He’s made it clear that he loves the Carolinas. I remember him telling me with great prides about his stadium in Charlotte that the north half of the stadium was ringed with plants and trees indigenous to North Carolina, and the the south half population by vegetation from South Carolina. Every time I’ve spoken to him about his franchise, the pride of the NFL in the Carolinas dots every paragraph. He’s already going to be a vilified figure because of the scandal that forced him to sell the team. I can tell you that he would be aghast if, sometime after he died, the franchise moved. Jerry Richardson is a legacy guy. He cares deeply about what he is leaving the Carolinas, even after this ugly scandal. So, knowing all that, you can think what you will about sale prices and how much money Richardson will take to his grave.

Here is what I think: Jerry Richardson would much rather die with $7.7 billion knowing the Panthers would stay in Charlotte than die with $8 billion and not being sure where the team would play in perpetuity.

I don’t have the adequate vocabulary to express what you’ve accomplished with The MMQB. The most impressive being the incredible writing staff you’ve assembled. That’s why I see you leaving as a plus. Not only will we still get The MMQB that’s been left in great hands but we’ll get your new column as well. You can basically write off my Monday mornings entirely now. Best of luck.

Now that’s exactly what I had in mind, Joe. You’re going to be able to read great football content with or without me. Thanks for seeing that.

I guess I shouldn’t be too bummed, considering your Monday morning column will continue in some other form on NBC’s website. Nevertheless, I find myself already lamenting your absence on The MMQB. Few things over the course of the last two decades have been as routinely satisfying as reading your column after a week of glorious and/or ugly football; and this from someone who rarely, if ever, agrees with you! Nevertheless, your writing, research and access has always been excellent, as was your dedication to reporting on the sport as passionately (if not objectively) as you knew how. I appreciate that, Peter, and know that I’ll be reading the next iteration of MMQB every Monday here in Stockholm, Sweden, whenever it’s ready. I hope we can keep on amicably disagreeing for the next 20 years.

Sweden! I vow that one of my next international trips will be to your country. Let’s have a beer. Thank you.

THIS EMAIL MEANS A LOT TO ME

I am a 62-year-old native Texan who has read your column since, it seems, the beginning of the internet. You have been my sporting rock for 20 years. I am more conservative than you in a few ways, perhaps because of economics and finance degrees. But I hate assault rifles, I am terrified of Donald Trump and I love my gay son and his husband. You are braver than me because you have the courage to write openly about your daughter. I helped pay for my son’s Palm Springs wedding but, because of perceived pressure and prejudice in south Texas, I did not have the courage, or pride, to tell anyone here about the wedding. I regret my silence every day. If you were to print this note, you would help me announce to a small part of the world how much I love and support my son. Thank you for your knowledge, passion and perspectives over the last two decades.

I got misty reading this email, Ira. I totally understand why it’s hard to acknowledge a gay child in some places in the United States. I hope, a generation from now, it’s not hard at all, and you stand with your son and his husband with pride in Texas and everywhere in this country. Don’t knock yourself out over this. It took a lot for you to write this email. Thank you.

DON’T TELL ME YOU READ THIS TO YOUR SON!

I have been reading your column for almost its entire run, a time frame that spans through college, two dogs, a divorce, and the birth of my now 7-year old son. I read your column to him now Wednesdays before bed, and he always enjoys the stories you tell. Other than Pokemon, football is his great love. I just wanted to say thank you for being part of our lives, and best of luck in your new endeavor.

GORDIE WAS NOT NICE

Good comment about Brad Marchand antics, but your choice of Gordie Howe as an old-time hockey player who would have been offended by it is inadequate. Howe may not have licked anyone but he sure was a vicious cheap-shot artist, using his elbows and the butt end of his stick to hurt opponents. If you want to invoke a classy old-time player, you would be on firmer ground with Jean Béliveau.

I love getting hockey tips in a farewell column. Truly. Thanks a lot.