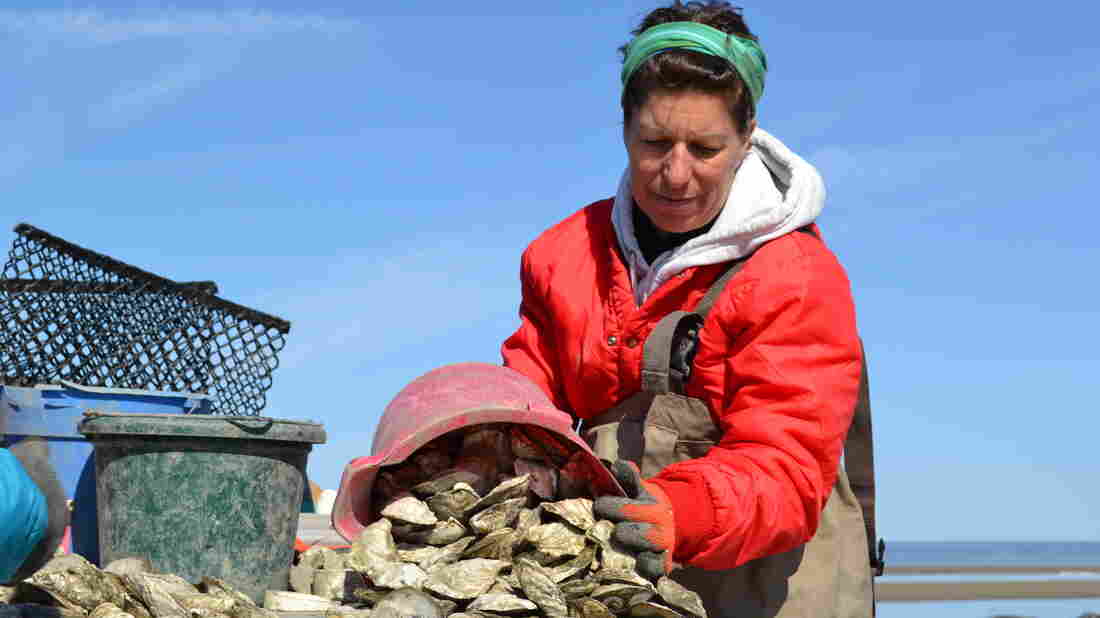 Oyster farmer and scientist Lisa Calvo leads a team of women that harvests oysters along the New Jersey coast. Calvo says she is inspired by the tenacity, skill and grit of women now coming into the industry. Jenn Hall/NPR hide caption 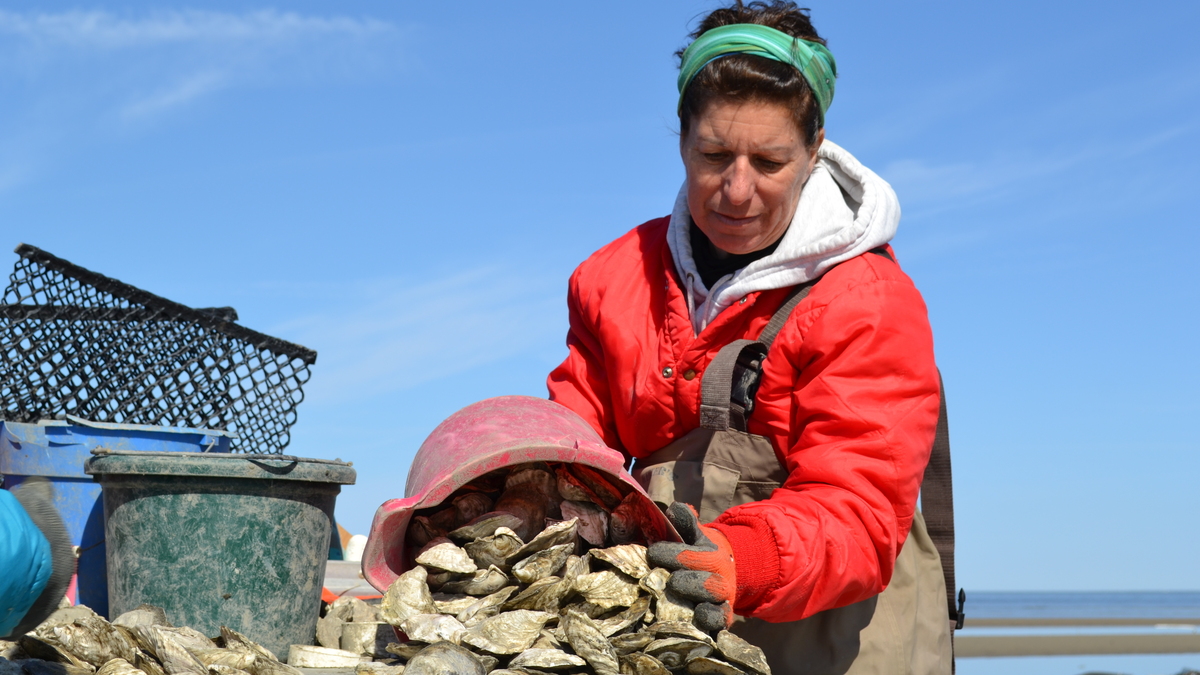 Oyster farmer and scientist Lisa Calvo leads a team of women that harvests oysters along the New Jersey coast. Calvo says she is inspired by the tenacity, skill and grit of women now coming into the industry.

As sunrise paints the lower Delaware Bay’s intertidal zone, the mudflats take on a metallic shimmer near Cape May, N.J. It’s arresting visual poetry, but the tide’s out and the clock’s ticking. Oyster farmer Lisa Calvo and her team get to work as her Sweet Amalia Oysters are revealed by the receding water.

The team hoists plastic mesh bags from rebar racks. They sort the bivalves, shells clinking in rhythm. Only in drawing close to the wader-clad trio does a unique feature become apparent: The entire crew is female.

Calvo is a farmer-scientist. She has long been a player in New Jersey’s oyster revival as the aquaculture extension program coordinator, based at Rutgers University’s Haskin Shellfish Laboratory. Though the industry is still small, it builds on a history that made nearby Port Norris the state’s wealthiest per capita town a century back.

Rack-and-bag growing suits this ecosystem, Calvo explains. As tidal waters go out, they reveal a network of sandbars like maritime back roads. As water flows, oysters are tide-tumbled into a delicate shape. Oyster farming is about nurturing, about giving the animals optimal conditions by which to produce shimmery shells and plump, sweet meat.

The composition of her team was a natural evolution, Calvo says. “One guy friend said: ‘You better start diversifying your image. It looks like you just hire women,'” she recalls. “I said, ‘I don’t know. That’s who’s interested right now.'” And as the state’s industry slowly grows, more women are joining the ranks alongside their male peers.

Calvo produces New Jersey’s annual Shellfish Aquaculture Report. Based on 2016 data, she estimates that 15 of the 70 people working at the state’s oyster farms are female. Two women, Calvo and Betsy Haskin, are among the owners of 20 active farms.

Haskin is daughter of legend Hal Haskin, who bred Rutgers’ disease-resistant “super oyster.” It revived the East Coast trade after disease began to cause the industry to collapse in the 1950s. As a young scientist in the ’80s, Calvo cut her teeth on his team, working both in the hatchery and in the field. Now, she uses the seed she helped produce. 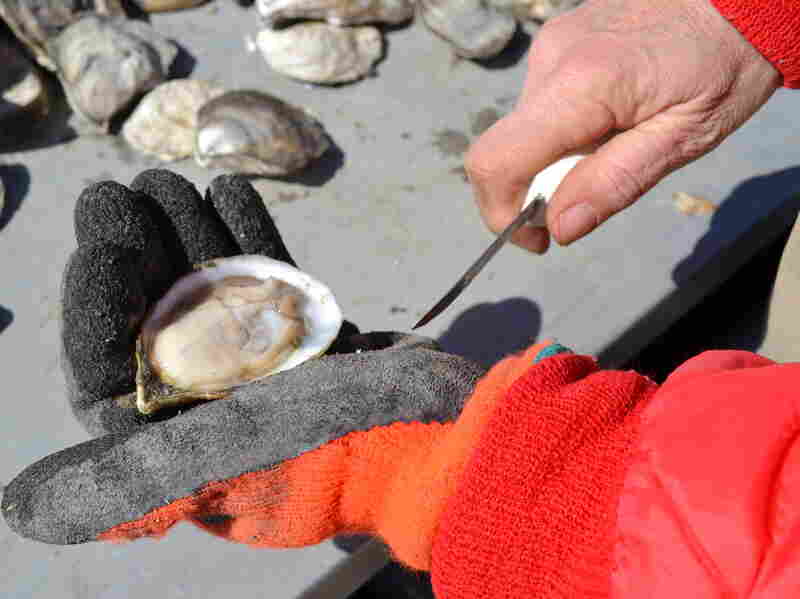 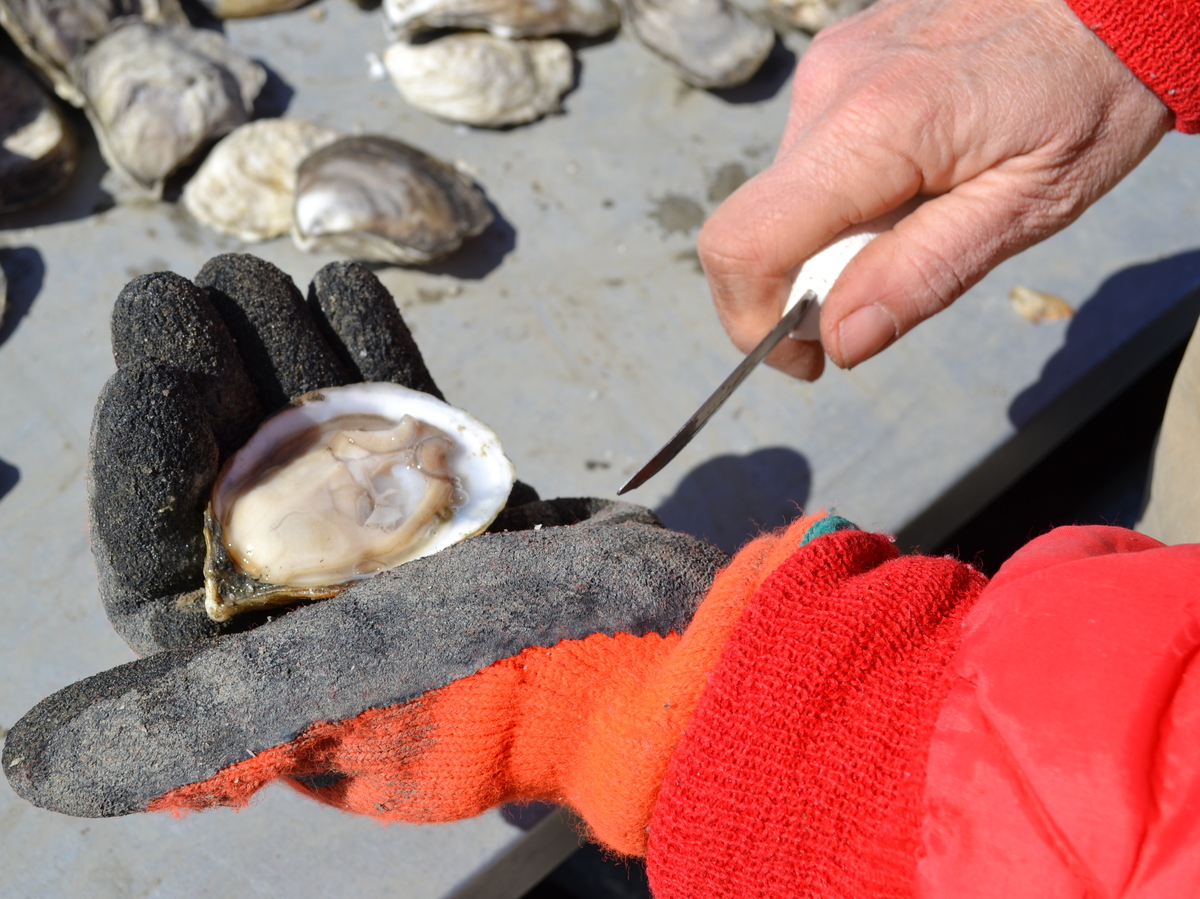 As to why women are now more visible in the oyster industry, marine science programs offer one answer. Attaining her master’s degree in 1991, Calvo was a rarity. Women comprised just a third of those enrolled in graduate ocean science programs. By 2014, that number had grown to 57 percent.

Calvo says she is inspired by what she sees in a small but notable wave of women coming up: tenacity, skill, grit. Speaking to those rising farmers, another reason for their increased numbers becomes apparent. They want to have a hands-on connection with the food system.

Near the Atlantic Ocean, in Barnegat Bay, Annie Lennox guides a 24-foot Carolina Skiff toward High Bar Harbor. Lennox recently turned 30, and oyster farming was part of a lifestyle overhaul. A former planner of major festivals, she left Manhattan to grow oysters with her brother and his business partner at Forty North Oyster Farms.

It was supposed to be a summer gig. That was two years ago.

Knee deep in the bay, Lennox takes a call as Chloe Starr harvests High Bar Harbors. “Annie loves doing sales calls on the water,” Starr jokes. Like Lennox, she came to this as a career change, leaving an Ivy League job in communications to work the water.

Third cousins, the pair have the easy familiarity borne of long hours working together. Soon, though, Starr will head home to Cape Cod, Mass., to run two farms for A.R.C. Hatchery. Without testing the waters here, she’s unsure that would have happened — yet now she can’t see doing anything else. Asked about building a farm and market, Starr found that she had answers. “I was part of a team that did all of that down here.”

In 2017, Forty North launched Barnegat Oyster Collective. Curating local and non-Jersey oysters, the collective helps restaurants shape their oyster menus while rebranding the region’s reputation as a shellfish destination. Lennox and Starr developed the organization’s operational backbone, which is as much about logistics as product: harvesting and tagging oysters, managing demand and intermodal transportation.

They’re proud of the systems they’ve created, and film director Corinne Ruff says their contributions can’t be underestimated. While shooting her 2017 documentary The Oyster Farmers, she was struck by farmers like Lennox and Starr. “Women are rising up from the bay in a big way,” she says.

To Starr, it reflects a millennial desire to reconnect with food at a time when women are redefining their roles in the workplace — and it’s happening all along the coast.

South of High Bar Harbor, the seafood market Maxwell Shellfish is ensconced in the trapped-in-amber town of Port Republic. Bridgitte and Gretchen Maxwell both joined the business in recent years. Known as “The Oyster Sisters,” they’re sixth-generation heirs to a company that produced a naturally disease-resistant oyster that thrives here. They’re also the first female employees to work the water since the business launched in the 1840s.

This time of year, they’re out at dawn, dredging for bottom-planted Graveling Points and Crab Islands. Oysters are hauled and dumped with a crash. They’re cleared and and then it’s on to the next batch. It’s a workout, and the sisters encourage and rib one another equally. “She’s just in it for the boat ride,” Bridgitte deadpans. 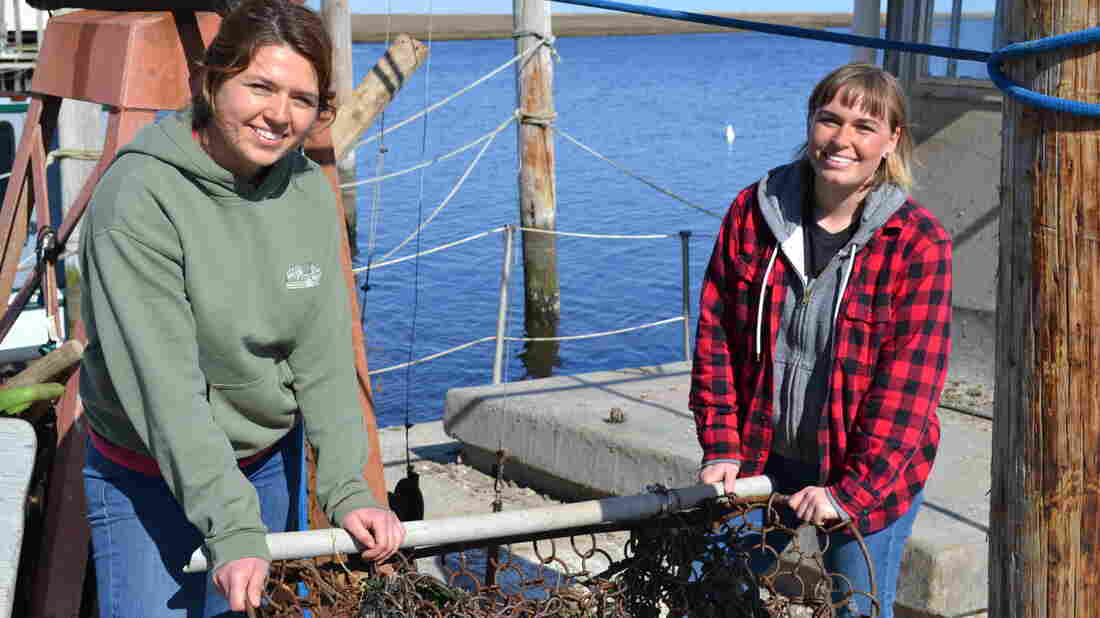 Gretchen (left) and Bridgitte Maxwell, aka “The Oyster Sisters,” are sixth-generation heirs to a company that produced a disease-resistant oyster. They are the first female employees to work the water since the business launched in the 1840s. Jenn Hall/NPR hide caption 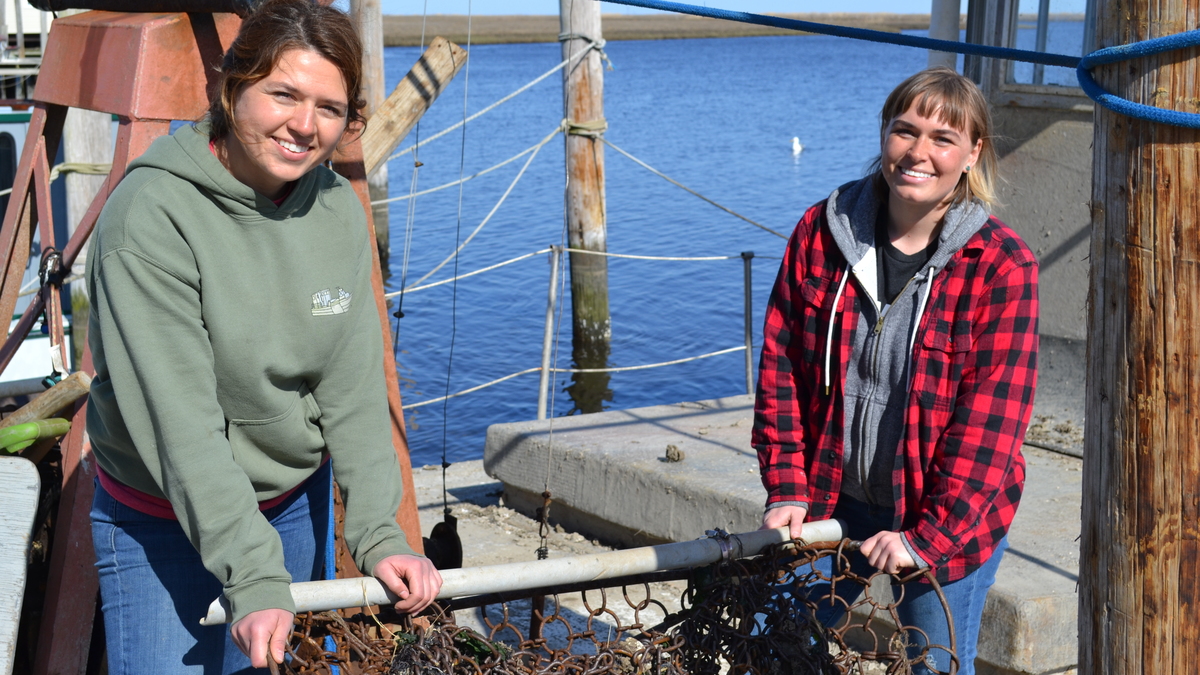 Gretchen (left) and Bridgitte Maxwell, aka “The Oyster Sisters,” are sixth-generation heirs to a company that produced a disease-resistant oyster. They are the first female employees to work the water since the business launched in the 1840s.

In reality, it’s about legacy. “I don’t think any of the other people I know whose dads did this still do it. I don’t want to let that go,” Bridgitte says. Recently married, she jokes that her husband’s fitness as a “waterman by marriage” was a prime selection criterion. There’s a reason The Oyster Sisters report little flak from local baymen.

Customers can be another story. “We had an event recently, and a guy came up and was like: ‘Oh, it’s great that you can open these things,'” Bridgitte recalls. Then: “What, are you going to catch them, too?”

That kind of reaction may soon change. During a Q&A at a Brooklyn, N.Y., screening of The Oyster Farmers, Lennox and Starr were asked about the field’s future. Noting trailblazer Sarah Malinowski of New York’s Fishers Island Oyster Farm in the audience, Lennox ventured a prediction: Women will rise. “I still get chills being able to say that,” she says.

“You are not going to find a greener food production system on this Earth,” Calvo says. If a woman is called to the water, opportunity is there, and she says she believes young women are ready.

“Everything is a boy’s job,” Gretchen Maxwell says. “So? That didn’t stop a lot of other women. Just get your hands dirty.”