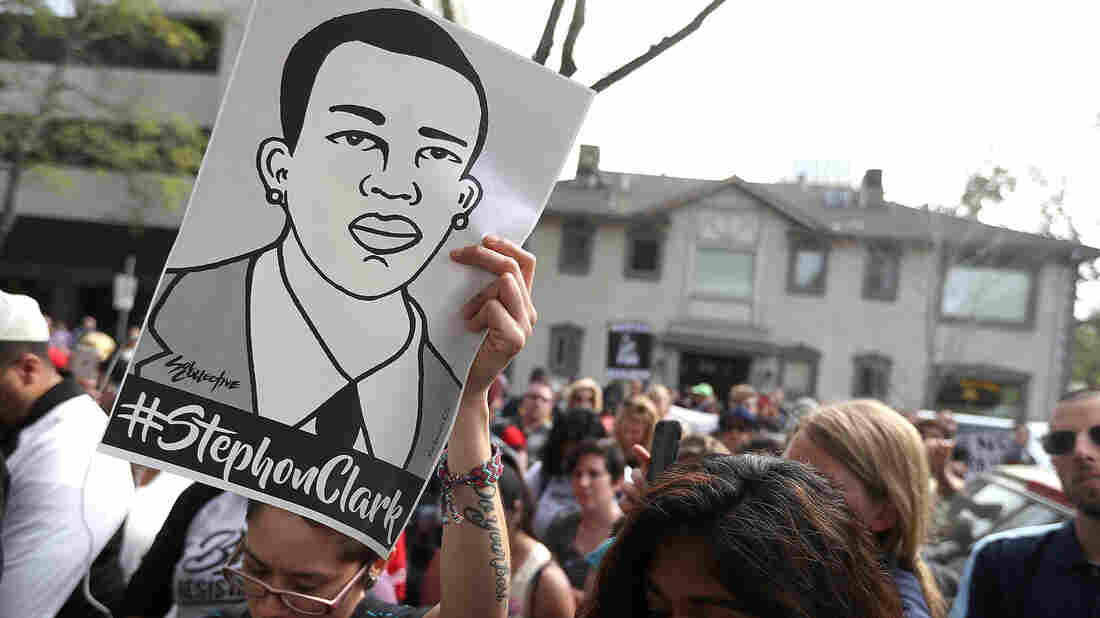 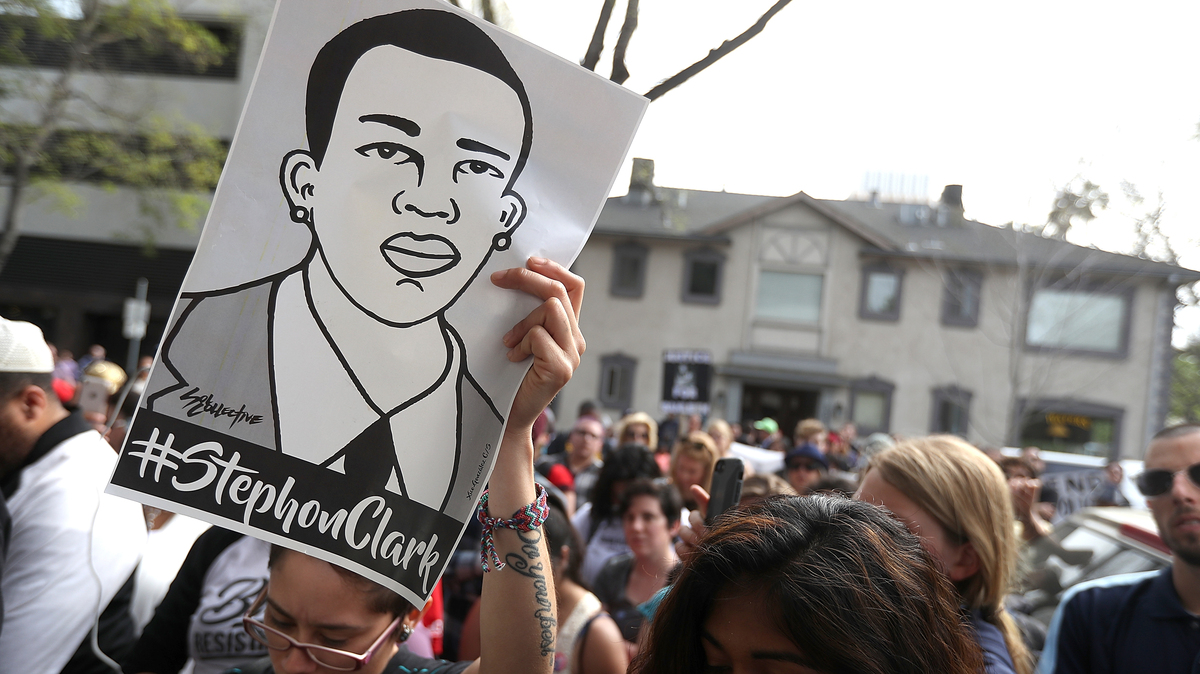 Black Lives Matter protesters stage a demonstration in front of the offices of Sacramento County District Attorney Anne Marie Schubert on April 4 in Sacramento, Calif. Protesters rallied to demand justice for Stephon Clark, an unarmed black man who was shot and killed by Sacramento police on March 18.

The official autopsy of Stephon Clark, an unarmed black man shot and killed by Sacramento police in March, found that he was shot fewer times, and fewer times in the back, than a private autopsy had concluded.

An autopsy commissioned by Clark’s family found that Clark was shot eight times, with at least six shots in the back, contradicting police officers’ account that Clark had approached them.

The coroner’s office, in a report released Tuesday, found he was shot seven times, three times in the back, in a manner consistent with the police account.

A Sacramento community organizer tells Capital Public Radio that the county’s autopsy doesn’t change the underlying problem with the killing.

“The police officers used excessive force,” Berry Accius told the member station. “There was no reason that this young man should have been killed. There was just none. At all.”

Clark’s death has inspired protests, with a diverse range of residents and visitors speaking out against police shootings.

Mayor Darrell Steinberg told the Sacramento Bee that the killing should lead to changes in procedures and training.

“Stephon Clark’s death remains a tragedy regardless of the particular results of an autopsy,” Steinberg told the newspaper. “We remain focused on working with the community and the police department to reexamine police training, protocols and procedures in an effort to avoid such tragedies in the future.”

The 22-year-old was shot and killed in his grandmother’s back yard on March 18. Police say Clark was facing them, moving forward, with an object in his hands that they believed was a firearm. Clark had a cell phone.

The family’s autopsy, performed by forensic pathologist Dr. Bennet Omalu, found Clark was first shot in his side and then largely shot in the back, suggesting he was not facing the officers when the shooting began. Omalu, a former coroner best known for his work on brain injuries, announced the results at a news conference on March 30.

The Sacramento County autopsy was performed by Dr. Kenny Su. The report was released to the public on Tuesday.

Su’s report was reviewed by three other doctors at the county coroners’ office as well as by an independent forensic pathologist hired by the county, “in light of the erroneous information that was released from the private autopsy and in an effort to ensure that we got the facts correct,” the coroner says.

The independent review was conducted by Dr. Gregory Reiber, a forensic pathologist who used to work for Sacramento County, the Bee reports.

Reiber found that Omalu mistook an exit wound for an entrance round, leading to “incorrect conclusions” about the position of Clark’s body. He said Clark was likely walking toward police, possibly in a crouched position, at the time of the first shot.

Reiber, looking at the county report, videos and photographs, also identified a number of other points where he said Omalu’s conclusions were unsupported or “untenable.”

Omalu, speaking before the coroner’s report was released, told Capital Public Radio that “the two autopsies performed by two different doctors should not be exactly the same.”

He told the member station that people should consider both autopsies before coming to a conclusion about what happened during the shooting.

A toxicology report found that Clark had substances including codeine, marijuana and cocaine in his system when he died. But Reiber noted that those results “are not considered directly germane to the cause of death.”

You can read the full coroner’s autopsy at Capital Public Radio’s website.