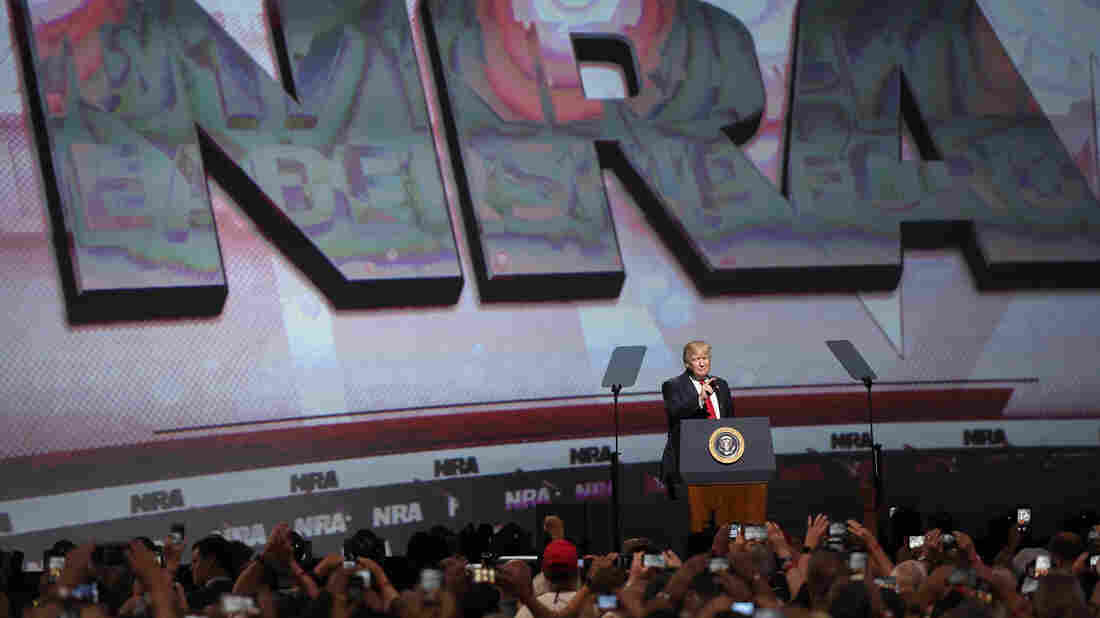 President Trump speaks to the National Rifle Association in 2017 in Atlanta. Despite new political pressure, the president and vice president are both scheduled to speak to the group this year. Mike Stewart/AP hide caption 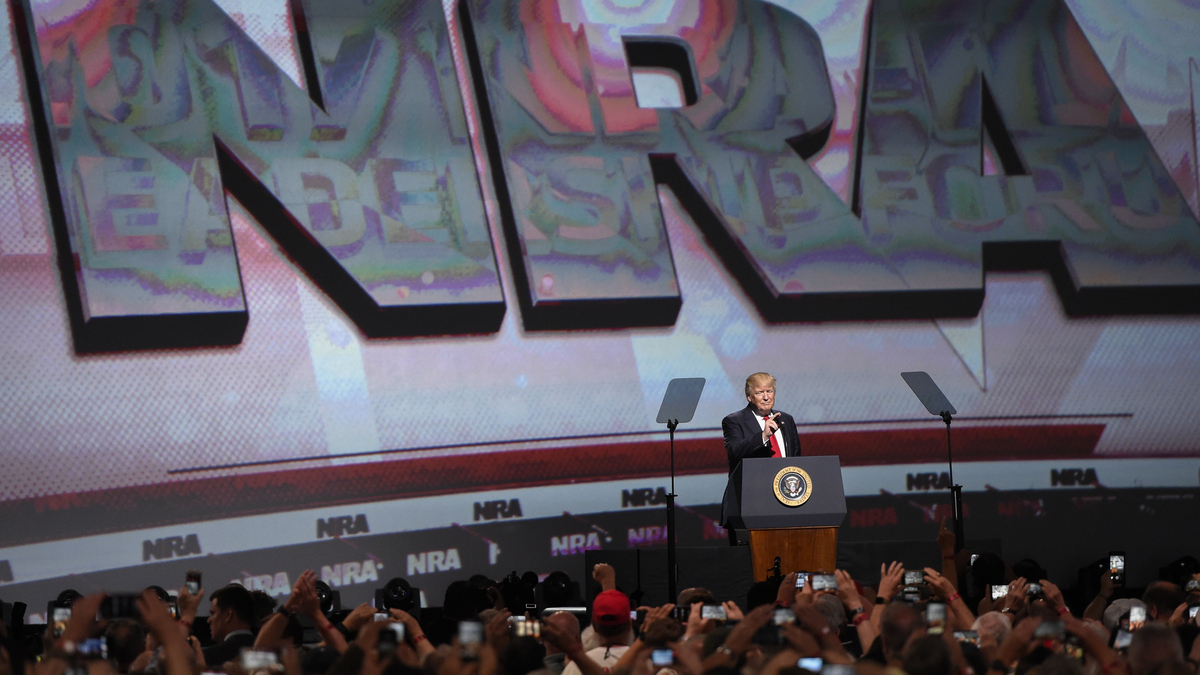 President Trump speaks to the National Rifle Association in 2017 in Atlanta. Despite new political pressure, the president and vice president are both scheduled to speak to the group this year.

Tens of thousands of gun owners are gathering in Dallas for the National Rifle Association’s annual convention, as the group’s leadership rallies its rank-and-file in a political climate altered by the school shooting in Parkland, Fla., and the student protests that followed.

The aftermath of the mass shooting, which cost 17 lives, makes this an important moment for the NRA. While its leaders remain insistent that more gun control will not stop such carnage, some acknowledge a shift in the way the country is talking about firearms.

“Of course [Parkland] increased the probability in some states of legislators passing more meaningless legislation,” Tom King, an NRA board member from New York, tells NPR.

“That’s going to happen, it already has happened. But has it eroded the NRA’s position? I don’t think so.”

The three-day convention opens Thursday night, with President Trump and Vice President Mike Pence scheduled to be the key speakers on Friday — a sign of the NRA’s resilient power and influence. The convention features a series of forums and speakers on gun and safety issues and a huge exhibition hall with the latest weaponry.

A big question in Dallas is how the NRA leadership navigates the less certain climate. Will it find new ways to tell its story to a country shaken by Parkland? Will there be a different conversation among rank-and-file gun owners about firearm safety?

Protesters, including student activists, are expected to make their voices heard outside. A large rally in favor of gun control has been organized for Saturday morning at Dallas City Hall.

King calls new gun control legislation “meaningless” because he’s convinced it won’t keep people or schools safe. But a growing number of people disagree, including some Republican leaders who have been closely aligned with the NRA.

Among them is Florida’s Republican Gov. Rick Scott, who signed bipartisan gun legislation in the aftermath of the Parkland shooting that raised the age for gun purchases, while making it easier for law enforcement to take firearms from persons deemed a public risk. Scott and Florida’s Republican-controlled legislature defied the NRA to pass the measure.

“The hardest thing I’ve ever had to do as a governor is try to find the words to console a parent who has lost their child,” Scott said at a signing ceremony in March.

“I think that is a really important shift,” says Kris Brown, co-president of the Brady Campaign to Prevent Gun Violence, a group that supports tighter gun laws.

She believes the NRA lost ground after Parkland, fumbling control of the conversation, failing to adapt to a new national mood.

“When we look at the last year with three of the deadliest mass shootings in American history, the NRA has been tone deaf,” she says.

Brown points to surveys that have long shown most gun owners and many NRA members support creating a stronger system of background checks for gun buyers, one that closes loopholes for private sales. But she credits the Parkland students for redefining the gun debate.

It was just a year ago that the NRA was so confident in its clout that the group had taken to mocking its political opponents, promising to crush anyone who proposed new gun laws.

In a controversial video that went viral, spokeswoman Dana Loesch said the NRA would prevail by using “the clenched fist of truth.”

Then came Parkland. In the days after the shooting, a new group of voices emerged in favor of gun control — student survivors who took on the NRA directly.

“To every politician who is taking donations from the NRA, shame on you,” said Majorie Stoneman Douglas High School senior Emma Gonzalez at a rally shortly after the shooting. Her words drew a roar of applause and have been looped again and again on TV and social media.

Even President Trump, a close NRA ally, publicly challenged the organization — at least for a rare moment.

In a White House meeting with members of Congress two weeks after the Parkland shooting, he called for comprehensive new gun legislation and he accused lawmakers of being “afraid” of the NRA.

But the NRA quickly flexed its political muscle. After a closed-door meeting with the group’s leaders, Trump backed off and the Republican-controlled Congress hasn’t approved new gun control bills.

That fact and the decision by Trump and Pence to attend this week’s convention is a sign that the NRA remains a powerful force. Donations to the organization actually surged after Parkland.

As rank-and-file members gather, board member Tom King says the NRA will once again make the case that firearms aren’t the real public safety issue.

The focus should be on other things, including more security in schools, King says. “Until we talk about the core issues, getting people jobs, getting the criminals off the streets, stopping the drug trade, we are going to be a dangerous country.”