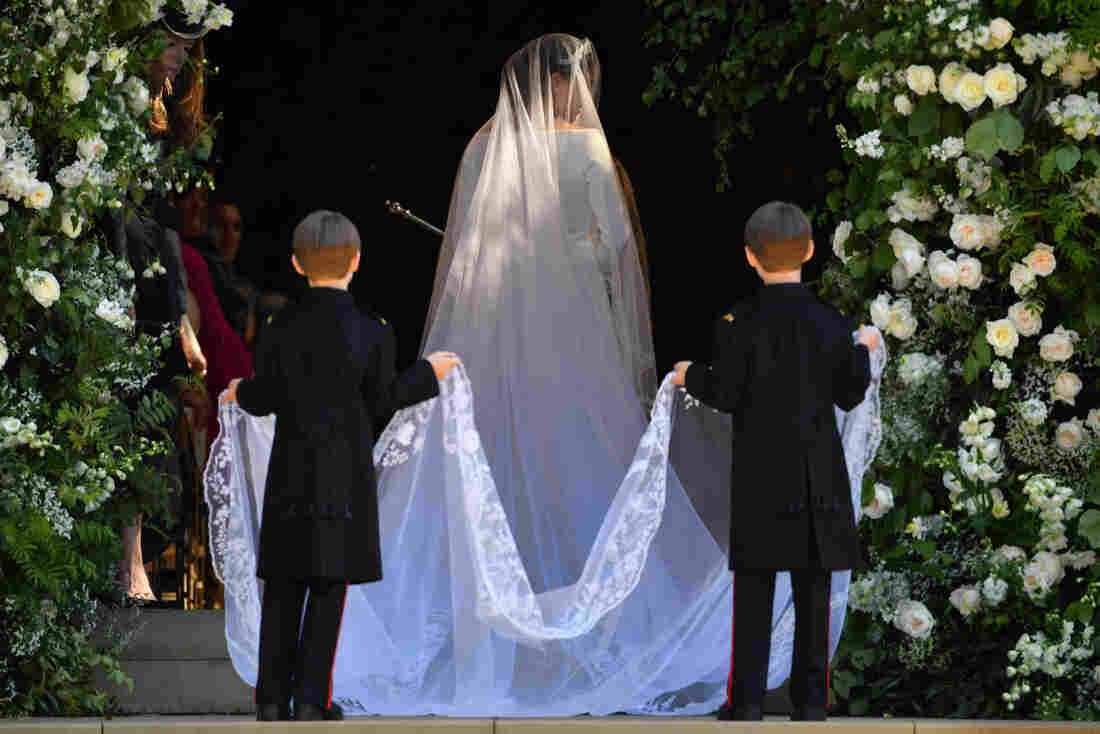 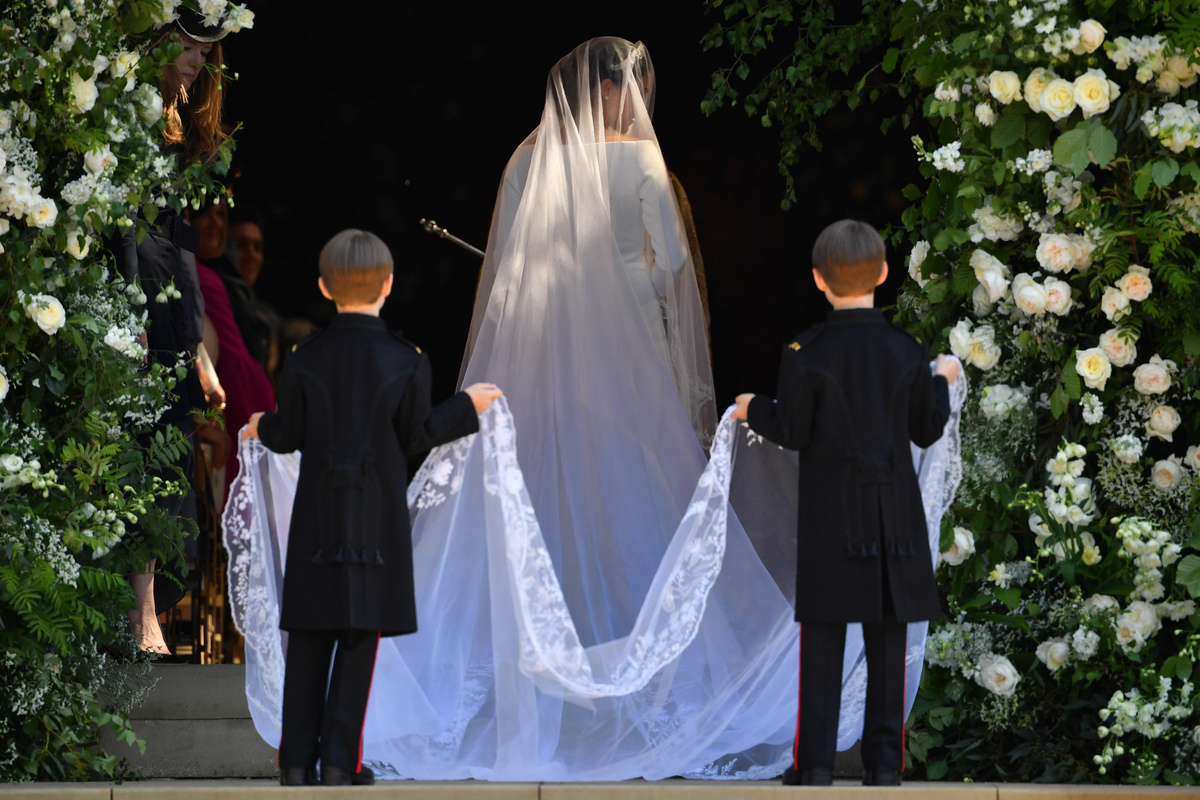 Flowers representing the 53 countries in the Commonwealth adorn the veil worn by Meghan Markle.

The 16-foot-long silk bridal veil worn by Meghan Markle is the subject of a spirited debate in India.

According to officials from Kensington Palace: “Ms. Markle expressed the wish of having all 53 countries of the Commonwealth with her on her journey through the ceremony. Ms. Waight Keller designed a veil representing the distinctive flora of each Commonwealth country united in one spectacular floral composition.”

Ms. Markle expressed the wish of having all 53 countries of the Commonwealth with her on her journey through the ceremony. Ms. Waight Keller designed a veil representing the distinctive flora of each Commonwealth country united in one spectacular floral composition.

India was represented with the lotus flower — its national flower.

The Western media was flooded with reports about the seeming goodwill of this gesture. The special message behind the wedding veil was one of love and charity, we were told.

So why are some Indians objecting?

On the very basic level, there was the fact that a handcrafted textile was being praised and celebrated as a positive symbol.

When India was a colony of England, Indian weavers saw a downturn in their business. The Calico Acts of the early 1700s effectively banned the import of most cotton textiles into England, many of which came from India.

And then as the industrial revolution arose, Indian and South Asian weavers suffered even further, says Aparna Kapadia, a historian of South Asia at Williams College.

Indian weavers under colonial rule were not able to compete even in their own local markets because India (and other colonies) were also the largest market for Britain’s industrially-produced textiles. “Europe came out richer from the industrial revolution. The colonial world did not,” says Kapadia, who was born and raised in Mumbai.

“It was no accident then that Gandhi chose the charkha, the Indian weavers’ basic cotton-spinning tool, as the symbol of India’s struggle for independence,” wrote Kapadia in an essay for an Indian news website.

And that leads to a larger concern. “Modern-day monarchy [seemed to be] reclaiming colonial history as its own,” she says.

Kapadia’s opinion, expressed in her article, is that the motifs on the veil reminded Indians of a painful and bloody time in their history.

Her essay was widely shared on social media, with many Indians quoting from it and echoing her thoughts.

For those drooling over #royalwedding, let’s not forget the bridal dress—a crucial choice?—paid homage to Empire & its recent bloody history in 9/10th of the planet.

“I think having those flowers embroidered on her veil might have been well-intentioned — but I find it patronizing and tone-deaf” says Hema Ramprasad, a freelance writer based in the Indian city of Bengaluru. And the very idea of India being a Commonwealth nation is not embraced by all Indians.

The Commonwealth was a term coined by the British politician Lord Rosebery in 1884. It was a means for the Britain to gradually release its hold over former colonies but still retain a connection to them as allies. India became a member in 1947, soon after its Independence. And today, the newly married Duke and Duchess of Sussex have been given the role of youth ambassadors to the Commonwealth.

But the Commonwealth has its detractors. In 2001, the acclaimed Indian author Amitav Ghosh refused to allow his publishers to enter his novel The Glass Palace for the Commonwealth Writer’s Prize because it reminded him of an Imperialist Britain from which India had once broken free.

“The idea of a Commonwealth is itself contentious today,” says Ramprasad. “People view it as outdated and irrelevant. I see it as sort of little club of former colonies. So I find it a bit baffling that she chose to carry that symbolism in her bridal outfit.”

“The flowers, though beautiful, represent colonial amnesia at its worst,” says Anita Ratnam, a classical and contemporary dancer based in Chennai. “Weddings are not the moment to be cynical, but I cannot ignore history and the bloody trail it’s left behind.”

The fact that India and other commonwealth nations were expected to be suffused with warmth at the gesture was an indication for some of how colonialism was viewed in the U.K.

“Unfortunately, colonialism isn’t talked about in Britain as the dark period in history that it actually was,”says Roopa Banerjee, an Indian writer and mother of two boys living in London. “While some people are empathetic, very few acknowledge the atrocities inflicted on the colonies.”

But not everyone is on the anti-veil train. Many in India’s younger generation believe that it’s important to move on.

According to 29-year-old Deepika Gumaste, a travel blogger based in Mumbai, the marriage of Harry and Meghan was special because of the bride and groom’s personalities. “Every gesture at the wedding was about equality and love,” she says. “When I look at it from my viewpoint, it tells me what I believe in — a more inclusive world.”

“Too much is being made of this,” says Paritosh Uttam, a software engineer based in Pune, Maharashtra. “We should not forget the past,” he says, “but we have been independent for a long time. We should move with the times and look forward.”

And then there are those with mixed feelings.

“We understand that it was meant to be a tribute,” says Bengaluru-based science researcher Deepa Padmanaban.

But she thinks of it this way — when you give someone a wedding gift, you think about what they’re like and what they would appreciate. “The same, ” she says, “should apply for tributes.”

Kamala Thiagarajan is a freelance journalist based in Madurai, India. Her work has appeared in The International New York Times, BBC Travel and Forbes India. You can follow her @kamal_t.