Tourists pose for photos in front of the city’s welcome sign near Mandalay Bay, which doubled as a memorial site after the shooting last October. On Wednesday, Las Vegas police released more than 1,000 pages of witness statements giving a deeper look into the moments leading up to the massacre. Mark Ralston/AFP/Getty Images hide caption 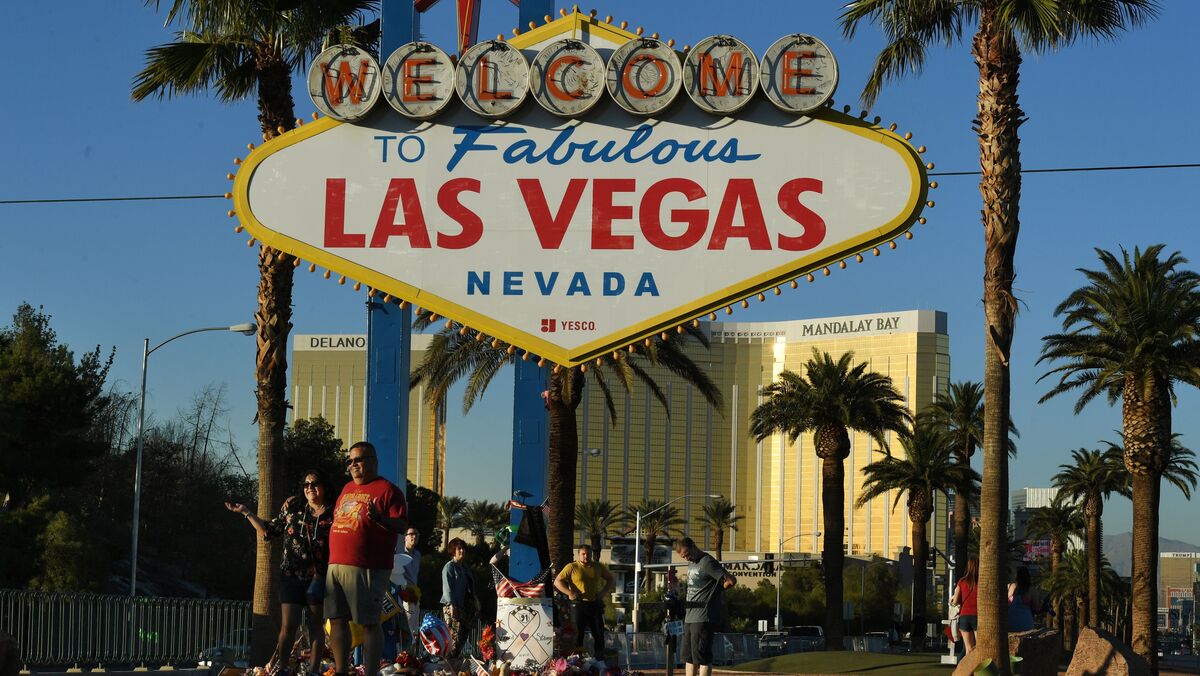 Tourists pose for photos in front of the city’s welcome sign near Mandalay Bay, which doubled as a memorial site after the shooting last October. On Wednesday, Las Vegas police released more than 1,000 pages of witness statements giving a deeper look into the moments leading up to the massacre.

“At first we thought it was fireworks.”

More than half a year since a gunman opened fire on a country music festival last October, killing 58 people and injuring hundreds more, Las Vegas police have released a trove of witness statements taken in the weeks immediately afterward. There are more than 1,200 pages in the batch made public Wednesday, ranging from handwritten one-line notes to typed transcripts spanning long conversations — but for the most part, victims and observers begin with variations on the same theme.

Then, the dozens of disparate voices agree, the strange sounds started.

“Just pop, pop, pop over and over again.”

“I thought it was static from the speakers and sound system because it was so loud that I could not hear the band or Jason, then realized there were no speakers behind us.”

“And my friend actually made the comment, ‘You know, I hope people aren’t being stupid and, you know, messing with firecrackers ’cause they’re gonna cause a stampede and people are gonna get killed.’ “

“There was a little pause and it started again.”

“But I heard it again and told my wife to run.”

“That’s when I realized that I had some sort of pressure on my ribcage, uh, near my right breast. I reached down thinking somebody had spilt their drink on me or something — not really putting two and two together until I realized that my hand was warm and red and that’s when it kind of hit me that I was shot.”

“At that point I felt like I’d been kinda punched in my — my shoulder.”

“I felt something hit my foot.”

“I had no idea I had been shot at that point, I only saw the blood.”

“Then we just heard bullets just ricocheting all over the place.”

“I’m asking people, ‘Where is the shooting coming from?’ No one is answering, no one knows.”

“All I remember seeing was everyone scrambling to get to safety and try to help each other. I saw people … bleeding uncontrollably and fighting for their own lives. I heard screams of desperation and terror.”

The narratives come without names, the witnesses’ identities having been redacted by law enforcement. They offered their first-person accounts to local officers from Las Vegas and Henderson, Nev., to FBI agents, told them in hospital beds, in hotel rooms, in the comfort of their own home if they were lucky.

One by one, detail building on detail, the scores of stories weave a scene of chaos and terrifying strangeness — a crowd plunged into bloodshed without warning or reason.

Encounters with the gunman

The witness statements also shed just a little more light on the man behind the trigger: Stephen Paddock, 64. His nighttime assault on the crowded concert venue, carried out from his 32nd-floor hotel room in the Mandalay Bay, lasted roughly 10 minutes — but in the days, weeks and even years leading up to the killing, Paddock occasionally made an impression on casino employees and strangers.

He was “reserved” and “always on his laptop,” but for the most part “it was a pleasure taking care of” him and his girlfriend, Marilou Danley, one employee familiar with their frequent visits noted.

Paddock was working on his computer again in his room the Wednesday afternoon before the shooting, another employee recalled. As she went about the room, changing his sheets, cleaning out his refrigerator, she told law enforcement that she felt increasingly uncomfortable because “he keep on staring at me.”

She said she was not truly scared at the time because he was an “old man” sitting far away from her in the room, “but the eyes keep on following me.” She noted he had also brought more than five pieces of luggage with him, an unusually large amount that stuck in her memory.

The encounter was so discomforting, she added, she could still feel his phantom stare a week later, long after they parted.

Another man noted that while he was out for an early dinner with his son the Thursday before the shooting, he had observed a man he believed to be Paddock speaking with an associate. Paddock and his companion were discussing the deadly sieges at Waco, Texas, and Ruby Ridge, Idaho, where federal agents sought to dislodge an armed cult and armed family, respectively, both with bloody results in the early 1990s.

“The men [were] angry about it” and the federal response, the witness recalled.

The Las Vegas Metropolitan Police Department declined to comment on Paddock’s possible motives and the trove of witness statements in general.

The huge document release — the second in roughly two weeks, after the department revealed police body camera footage recorded during the massacre — comes after multiple media outlets brought a lawsuit seeking the disclosure of materials related to the October shooting.