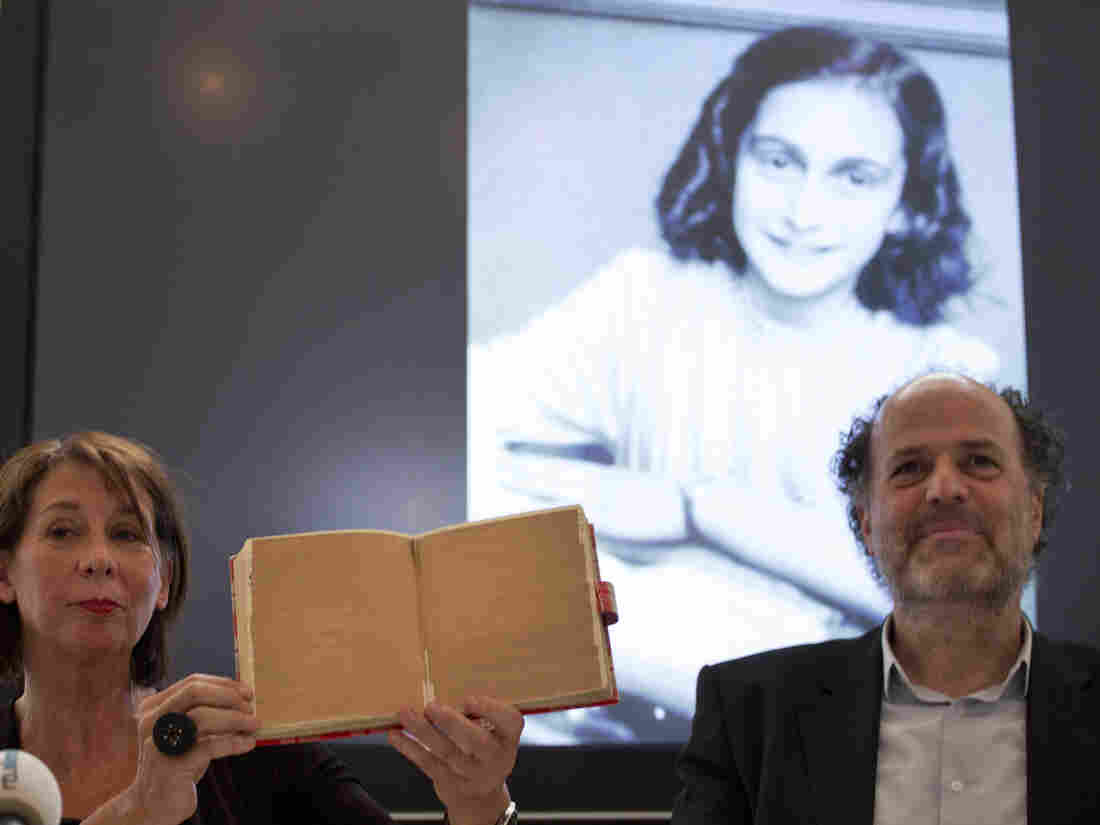 Teresien da Silva, left, and Ronald Leopold of the Anne Frank Foundation show a facsimile of Anne Frank’s diary at a press conference in Amsterdam on Tuesday. Researchers used digital photo editing techniques to uncover text on two pages of the diary, revealing risque jokes and an explanation of sex and prostitution. Peter Dejong/AP hide caption 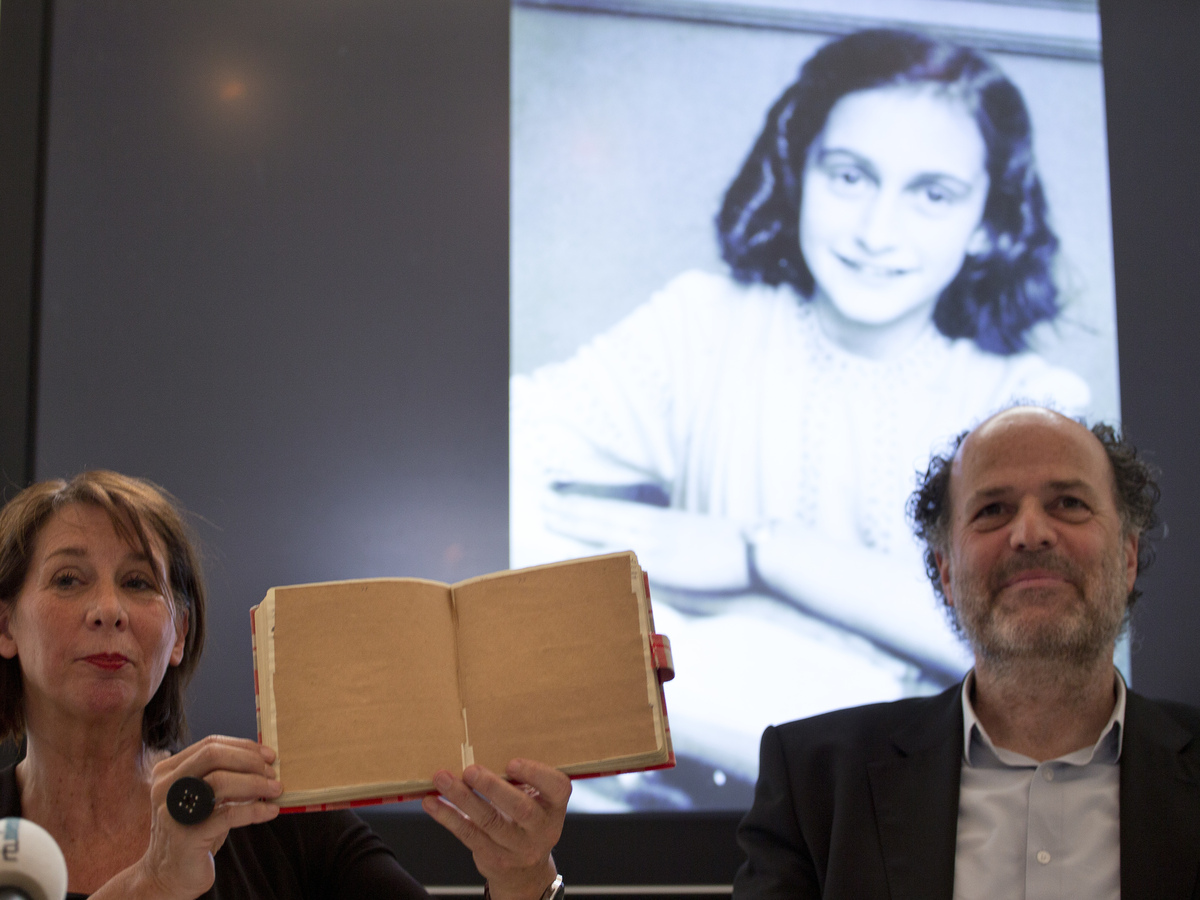 Teresien da Silva, left, and Ronald Leopold of the Anne Frank Foundation show a facsimile of Anne Frank’s diary at a press conference in Amsterdam on Tuesday. Researchers used digital photo editing techniques to uncover text on two pages of the diary, revealing risque jokes and an explanation of sex and prostitution.

Inside a secret annex above her father’s office, Anne Frank edited passages from her first diary, the book that captured a teenager’s experience of the Holocaust. What she hid underneath brown gummed paper on two pages was revealed on Tuesday – five crossed-out phrases, four risqué jokes and 33 lines about sex education and prostitution.

The two pages, the only pages that the teenager ever covered, were photographed in 2016 during a regular check on the condition of her diaries, said the Anne Frank House.

The pages were backlit by a flash and image-processing software helped researchers to make out the words, reported the Associated Press.

“I’ll use this spoiled page to write down ‘dirty’ jokes,” Frank had written on September 28, 1942. Then she filled a page with words about how a young woman starts to menstruate around age 14, “a sign that she is ripe to have relations with a man but one doesn’t do that of course before one is married.”

She also wrote about prostitution. “All men, if they are normal, go with women, women like that accost them on the street and then they go together. In Paris they have big houses for that. Papa has been there.”

After the racy remarks, Frank discussed the importance of sex education, pretending that she had to teach someone else which allowed her to show what she knew about sex. She didn’t understand why adults were so secretive about it, said the Anne Frank House.

The hidden texts were presented by the Huygens Institute for the History of the Netherlands, the Anne Frank House and the NIOD Institute for War, Holocaust and Genocide Studies.

“Anne Frank writes about sexuality in a disarming way. Like every adolescent she is curious about this subject,” said Ronald Leopold, executive director of the Anne Frank House.

“Anyone who reads the passages that have now been discovered will be unable to suppress a smile. The ‘dirty’ jokes are classics among growing children,” said Frank van Vree, director of NIOD. “They make it clear that Anne, with all her gifts, was above all also an ordinary girl.”

The researchers said the newly discovered subject matter is not exceptional — Frank often wrote down suggestive jokes that she heard from her father, Peter van Pels and radio broadcasts. And she wrote openly about her menstruation and conversations with van Pels on sex and sexuality.

Instead, the “dirty” humor reveals a way to break the tension in an 800-square-foot space where movement and expression were curtailed for survival, said the Anne Frank House.

“That Anne Frank had risqué jokes in her diary speaks to her humanity,” Sara Bloomfield, director of the U.S. Holocaust Memorial Museum, told NPR. “Anne is the Holocaust’s most well-known victim because her diary ​describes her inner life ​and her hopes​ for the future in the midst of the Nazi onslaught.”

In the two years that Frank hid from the Nazis, she wrote about hunger and fear of being discovered, but also celebrity gossip, arguments with her mother and her first kiss.

According to The Anne Frank House, the teenager often reread and edited her diary. She might have hidden these two original pages because she worried that the other seven people in the annex would read her diary.

After the group was discovered and deported, and Frank perished in Bergen-Belsen, Otto Frank, her father and the only surviving member of the family, edited and published his daughter’s writing.

The Diary of a Young Girl became one of the world’s most widely read books, available in more than 70 languages.