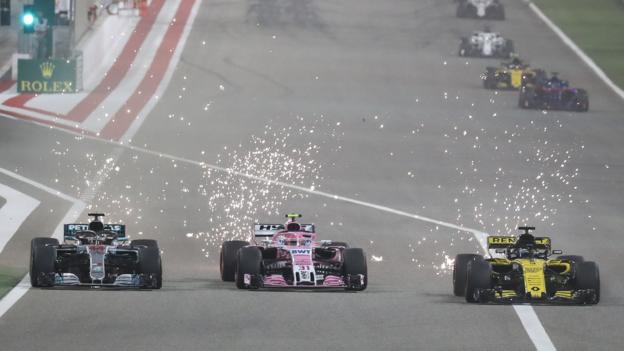 The modifications to the cars have been based on research aimed at finding ways of making it less difficult for one car to follow closely behind another.

“The studies indicated a likelihood of a positive impact on racing and overtaking,” the FIA said.

It amounts to a victory for the FIA and F1 after opposition from some teams.

The changes came out of research being undertaken by the FIA and rights holders F1 for larger rule changes aimed at the 2021 season, for which the sport is planning a major overhaul of technical, sporting and financial arrangements.

But the FIA and F1 discovered some ideas that could be introduced earlier. After asking the teams to research their effect, it was decided to bring them forward.

That decision was partly motivated by this year’s season-opening race in Australia, where there were only five overtaking manoeuvres throughout the entire grand prix.

Opponents of the changes pointed out that overtaking has always been difficult on that track and that subsequent races had featured better racing.

However, there is an acceptance within F1 that rules introduced in 2017 to make the cars faster and more dramatic have made overtaking harder.

A major discovery of the FIA/F1 research was that the current front wings have a major impact on the ability of one car to follow another.

These wings create a so-called “out-wash” effect, where the air off the front wing is directed around the outside of the front tyres for optimum aerodynamic downforce.

It was discovered that this out-wash effect had a harmful effect on the way the air reacted with the car behind, reducing its ability to create downforce. With less downforce, the car behind has less grip, cannot go as fast through the corners and therefore the driver struggles to get close enough to overtake.

The idea behind the rule changes is to ensure the car in front creates less disturbed air – by eliminating out-wash from the front wing by simplifying its end-plates – so the car behind can follow more closely.