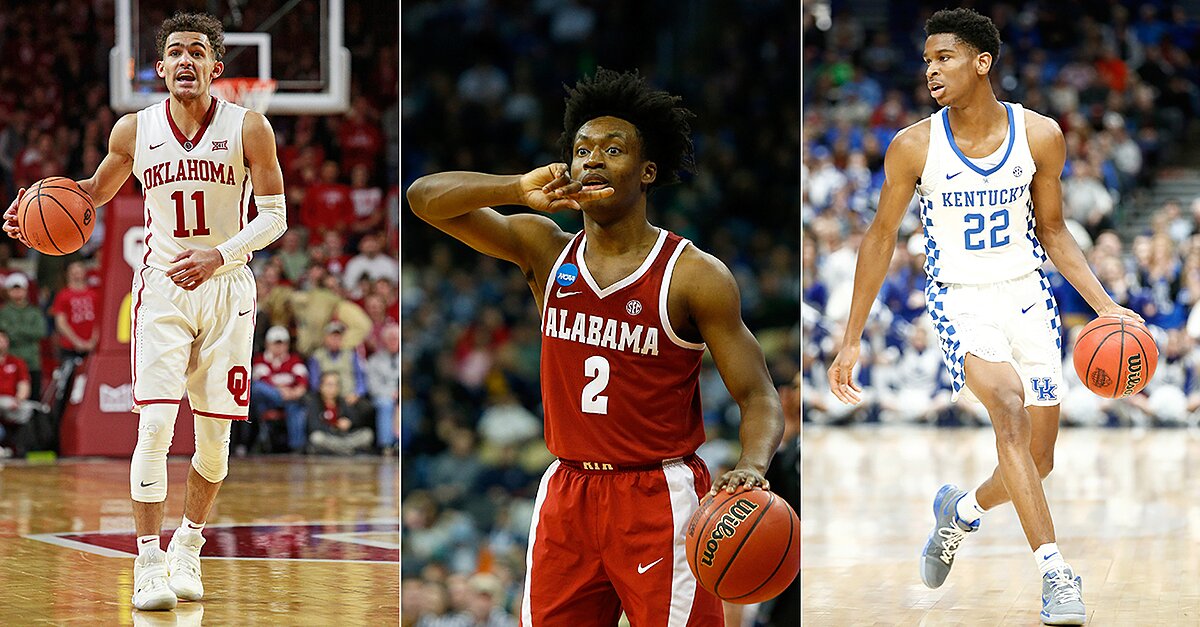 We’ve entered the closing stretch of the pre-draft process. Teams will spend the next couple of days finalizing their boards and gauging which players could be available when they’re on the clock. The Crossover’s Front Office continues to use hypothetical draft-night scenarios to spotlight similar prospects: If given the opportunity, which would you pick for your team? Our writers will choose sides and make their cases for each player. In our first installment, we broke down Michigan State’s Jaren Jackson Jr., Duke’s Marvin Bagley III and Texas’s Mohamed Bamba. Then we analyzed Michigan State wing Miles Bridges, Kentucky wing Kevin Knox and Villanova wing Mikal Bridges. Today we’re turning to three guards who could be picked in the lottery: Oklahoma’s Trae Young, Kentucky’s Shai Gilgeous-Alexander and Alabama’s Collin Sexton.

Trae Young’s numbers make an awfully strong argument for him as the top point guard in the class, so much that it’s almost too obvious. I’ll just leave them here and move on. Young averaged 27.4 points per game (most in the country) and 8.7 assists (also the most in the country) using 38.5% of his team’s possessions (the highest clip in the country). He made 36.1% of his threes and 49.3% of his twos while attempting just 21 unguarded catch-and-shoot jumpers the entire season. When Young ran isolation and either shot or dished for a shot (this happened 207 times), Oklahoma made 42.6% of shot attempts. When he ran pick-and-roll and shot or passed (this happened 601 times), the Sooners scored 43.9% of the time. Young did all of these things as a true freshman.

It is obvious that Young has the talent to be useful on offense, it’s also obvious that he’s unlikely to be a good defender. His body will mature, given he’s 19, but he’s not going to magically grow or get much faster laterally. We know those things, and that there are parts of his game that won’t translate, at least not right away. But we also know that Young might be the most individually skilled player in the entire draft, from his handle to his jumper to his footwork and his ability to shoot floaters and use angles. He had an unprecedented college season. The best argument for Young is a glass-half-full tack: rather than simply wondering if you can build a winning team around him, the better question might be why you wouldn’t want to try.

Some players are more versatile than others, but there’s no such thing as an easy team-building exercise, no matter who your best player is. If you take Young, who’s inarguably the most talented offensive player of the trio in question, and find the right players to put around him, it seems obvious that on some level it can work. Many of the league’s elite point guards struggle defensively and get picked apart in the playoffs (think Kyrie Irving, Damian Lillard and the like) but their offensive output can carry the load for their entire team. Although it’s true that Young needs shooters and versatile defenders around him to be fully utilized, he’s not the first high-scoring point guard to feature that hole in his game, nor will he be the last. There’s a case for him as the most statistically prolific college freshman point guard of all time, and he did it without much help at Oklahoma. And it’s glaringly obvious that of Sexton and Gilgeous-Alexander, Young has the highest upside. He doesn’t have to be Steph Curry to make that a reality—he may just need some thoughtful investment, and that’s a challenge front offices should embrace.

Can I interest you in a 6’6″ point guard with a 6’11.5″ wingspan, who shot 40.4% from three, 81.7% from the line, grabbed 4.1 rebounds and dished 5.1 assists in a pro-style John Calipari system at Kentucky? Shai Gilgeous-Alexander ran 499 pick-and-rolls during his lone collegiate season, per Synergy Sports, good for 18th in the country while generating a solid 0.99 points per possession. What more can you ask for in the modern NBA? SGA is long enough to guard all three perimeter positions, can stroke threes off-the-ball in multi-guard lineups, and organize an offense like a surgical lead ball handler. He’s the complete package, all bundled in a frame that already boasts athletic prowess and obvious potential to add muscle as he matures under the eye of a professional development staff.

This was not a typical Cal-era Kentucky season, where freshmen phenoms flock to Lexington and race their way to another Final Four. It took time for the Wildcats to blend together, and UK only became the best version of itself once Gilgeous-Alexander claimed the keys of the program. He’s impeccably smooth with the ball, utilizing his size and impressive pace to probe past defenses and get into the paint. He can score at all three levels and possesses the decision making NBA coaches won’t bench a young rookie for.

Both Collin Sexton and Trae Young are flashier prospects, harboring a scorer’s mentality and the charisma to shoulder an entire team’s identity. I’d rather gamble on the Canadian kid who emerged as Kentucky’s leader by example, outworking Quade Green and forcing his coach’s hand to fork over point guard responsibilities. Shai’s shooting has flown completely under the radar. He merely attempted 57 threes at Kentucky, compared to Young’s 328 (!) and Sexton’s (131). But he’s flashed smooth mechanics and a high release point that should easily translate. I’ll take the longer, more consistent defender who will seamlessly acquiesce into a team full of veterans on the offensive side of the ball. Gilgeous-Alexander is going to be the best point guard from this class when it’s all said and done, and the team that selects him later in the lottery is going to be doing back flips when the phone that selection into the league.

When evaluating the trio of point guards projected to be picked in the lottery on Thursday night, it is particularly important to take into account the difference between their value as college basketball players and their value as draft prospects. During his one season at Oklahoma, Young was a spellbinding sensation, at once a viscerally thrilling performer and an all-consuming controversy magnet whose quick trigger and moonshot jumpers called to mind Steph Curry’s unanimous MVP campaign. Gilgeous-Alexander didn’t enter Young’s stratosphere as a hype-generator, but by March, after drawing a lower recruiting ranking than six other players in the Wildcats’ incoming recruiting class, he had blossomed into arguably the best player for a blue blood program with a rabid fan base. Sexton, meanwhile, maintained a relatively low profile while leading a football school to its first NCAA tournament berth in six years.

Young and Gilgeous-Alexander authored more memorable one-and-done stints than Sexton did, but among these three PGs, Sexton may have the best chance of developing into a high-level starter for an NBA team. While Young’s capacity for offensive eruptions and Gilgeous-Alexander’s defensive upside should see both of them come off the board in the top half of the first round, Sexton should be the first point guard selected on Thursday night on account of his off-the-dribble explosiveness, scoring ability and intense mindset. Sexton is a high-floor prospect whose rapid rise from a little-known recruit out of Pebblebrook (Ga.) High to a five-star recruit to an All-Southeastern Conference honoree should continue at the next level as he smooths out some of the rougher edges of his game. Faced with a shallower crop of top-end point guards than last year’s draft—in which five of the first nine players picked, including the first two, were PGs—general managers shouldn’t hesitate to buy into Sexton as their long-term answer at the 1.

The biggest reason Sexton is such a highly regarded prospect is simple: He has a knack for putting the ball in the basket. Sexton ranked second in the SEC last season with an average of 19.2 points per game, and he went off for 40 points in a Nov. 25 loss to Minnesota in which Alabama was forced to play 3-on-5 for the final 10 minutes. There were times last season when Sexton, carrying one of the highest usage loads in Division I, settled for too many ill-advised looks. That shouldn’t be a major concern. The team that drafts Sexton can lighten his shot-creation responsibility with other capable scorers.

Sexton can puncture defenses by exploding into the paint and navigating contests for close-range finishes, but opposing guards can’t give him too much breathing room while protecting against the possibility of getting roasted off the bounce. Sexton is a willing pull-up jump shooter who manufactures space with an advanced array of dribbling moves capable of fazing the limited set of defenders not susceptible to his blow-bys. Sexton attempted an average of four threes over 33 games at Alabama last season, and he hit them at a 33.6% clip. That percentage might undersell his long-range shooting ability, as Sexton knocked down 78% of his 252 attempts from the free-throw line.

Sexton’s defensive utility is limited by his size. Both he and Young measured at 6’0.5’’ without shoes at the combine last month, four inches shorter than Gilgeous-Alexander and taller than only four other players at the event. Sexton, though, is considerably longer than Young. Sexton’s wingspan of 6’7.25’’ gives him the potential to check both guard positions, and even if he’s at a physical disadvantage in some matchups, Sexton can make up for it with his lateral quickness and anticipation. Sexton’s intensity and competitive fire, if channeled in the right ways, could make him an effective one-on-one stopper. It seems unlikely that Sexton will grow into an elite backcourt defender, but it also seems unlikely that he will get played off the floor because of his shortcomings on that end—a major bonus given everything he can do on the other one.