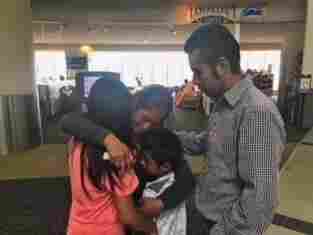 Elena Santizo hugs two of her children at an airport in Tennessee after a nearly three-month separation. TK hide caption

Elena Santizo sat by the departure gate in El Paso, Texas on Friday with a rosary around her neck, waiting nervously to board a plane for the first time in her life. Simply riding the escalator up to airport security gave the 39-year-old mother the jitters. She opted for the stairs instead.

“To tell my story is difficult,” she said. “Everything I’ve lived through, so much, ever since I left Guatemala.”

Santizo fled violence and an earthquake that destroyed her adobe home in the rural village where her family grew corn, beans, and squash. When she surrendered to border patrol agents in El Paso this spring, border authorities detained her and took her three children. She said she didn’t hear from them for 20 days.

“I felt like hurting myself or killing myself,” she said. “The suffering I endured will be very difficult to forget.”

While in detention, Santizo and the other immigrant mothers consoled one another. Her husband, Angel, mailed her a birthday card hoping to cheer her up. She carried it with her in an envelope beside a Bible and her immigration paperwork when she was released on Thursday. She was at the airport the next morning, her sneakers still missing the laces that the guards removed at the detention center.

The flight from El Paso to Tennessee was the last leg in a more than 2,000-mile journey. Hours later, in a carpeted airport foyer, she finally embraced her children for the first time in three months.

“My son, how are you,” she asked her 7-year-old between sobs, “It hurt so much when they took you away.”

Santizo’s children were released to their father, Angel, about a month ago. He’d been in the U.S. four years already, working the night shift at a factory. Knowing the risks, he said he agonized over the decision to bring his family to the U.S.

“When I knew they were in danger, I couldn’t sleep, I fell into a depression,” he said. 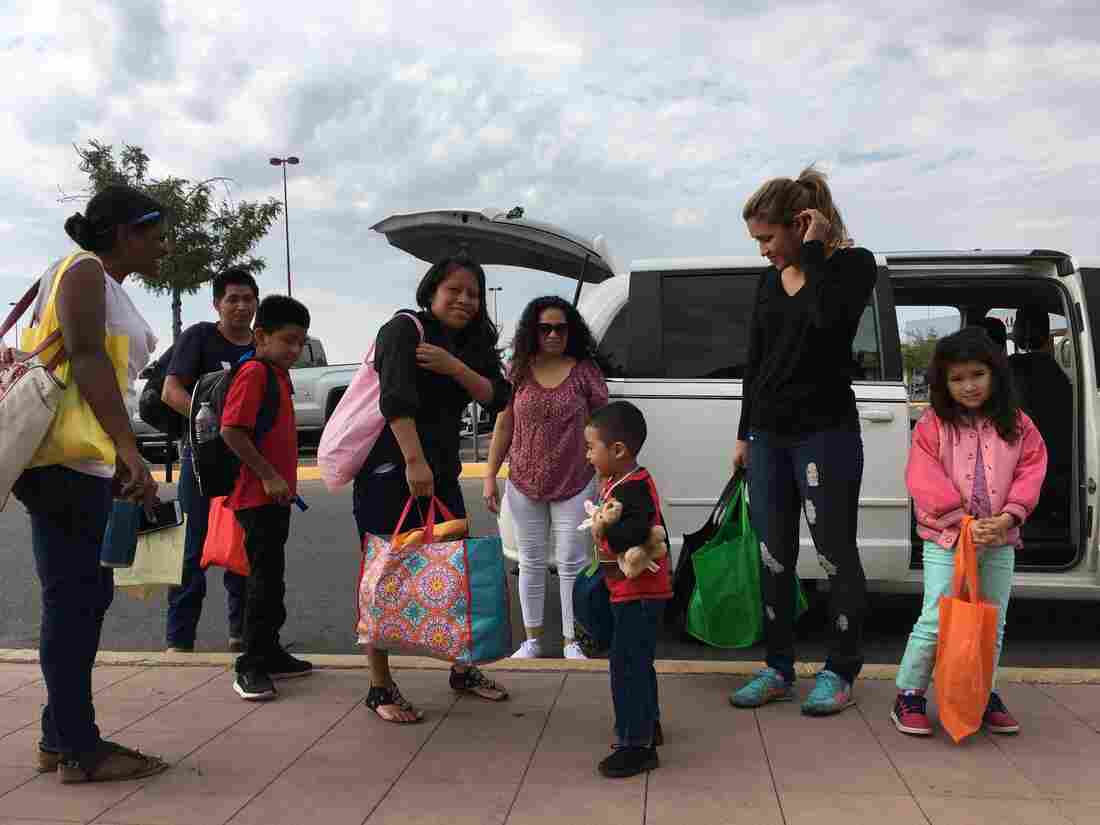 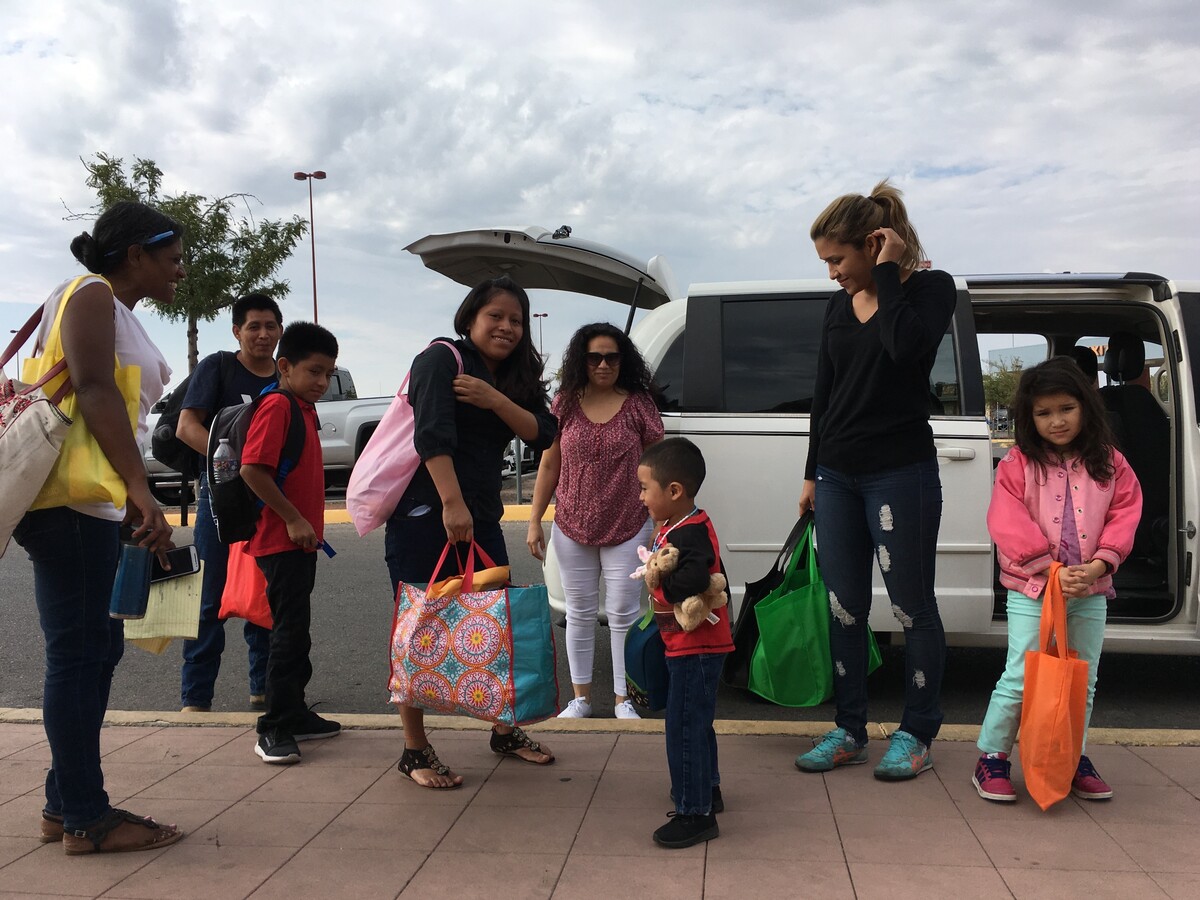 Reunited families at the airport in El Paso, Texas.

With their family together, he felt more at peace. But how long that peace will last is uncertain. His wife, who has come seeking asylum, is set to appear before an immigration judge next month.

The work of unifying families separated at the U.S./Mexico border continues even though the court-imposed deadlines to reunite them has past. In El Paso and beyond, the crisis has inspired ordinary citizens to get involved.

Lety Marquez and her husband Gino sacrificed their Vegas vacation and spent the last two weeks shuttling immigrant families from shelters to the airport instead.

“When my husband told me about what happened with the kids and the parents, I said, ‘Okay, let’s go. Let’s do it’,” Marquez said.

The couple runs a small transport company in El Paso. They met at a drive-in in neighboring Juárez, Mexico 26 years ago. Gino waved and smiled at his future wife from under a cowboy hat. Weeks later, Lety crossed the border unlawfully to move in with him. Now that they’re married, she’s a legal permanent resident, and they have three boys. Her sons are often on her mind as she ferries immigrant families.

In other words, she made trips to the airport non-stop for roughly nine hours.

This Saturday, Marquez pulled up to a shelter in her Dodge Caravan and picked up a group from Guatemala. They wore donated clothing and carried little more than a tote bag and stuffed animal. A 4-year-old with a Ninja Turtle backpack got a smooch from a shelter volunteer before piling into the van. He was smiling, happy to be reunited with his mom two days ago. She climbed silently in the backseat. Like so many others, they have a future court date where they’ll try and fight deportation.

Marquez said she overhears some of her passengers praying on the drive.

Inside the shelter, at lunchtime, volunteer cooks boiled eggs and fried potatoes. Shalini Thomas, a business student on summer break, managed travel logistics from a couch just beyond the kitchen.

When asked why she’s not relaxing with her family in Iowa, Thomas said, “The same reason that so much of the American public is here and is donating is because showing our disagreement with what the government is doing by being present with these families is really important.”

For the many volunteers and community organizations in this border city, the crisis of family separation isn’t over. The Trump administration has yet to reunite hundreds of families it claims are ineligible for reunification. Going forward the government will have to report its progress to a federal judge as it works to resolve those remaining cases.