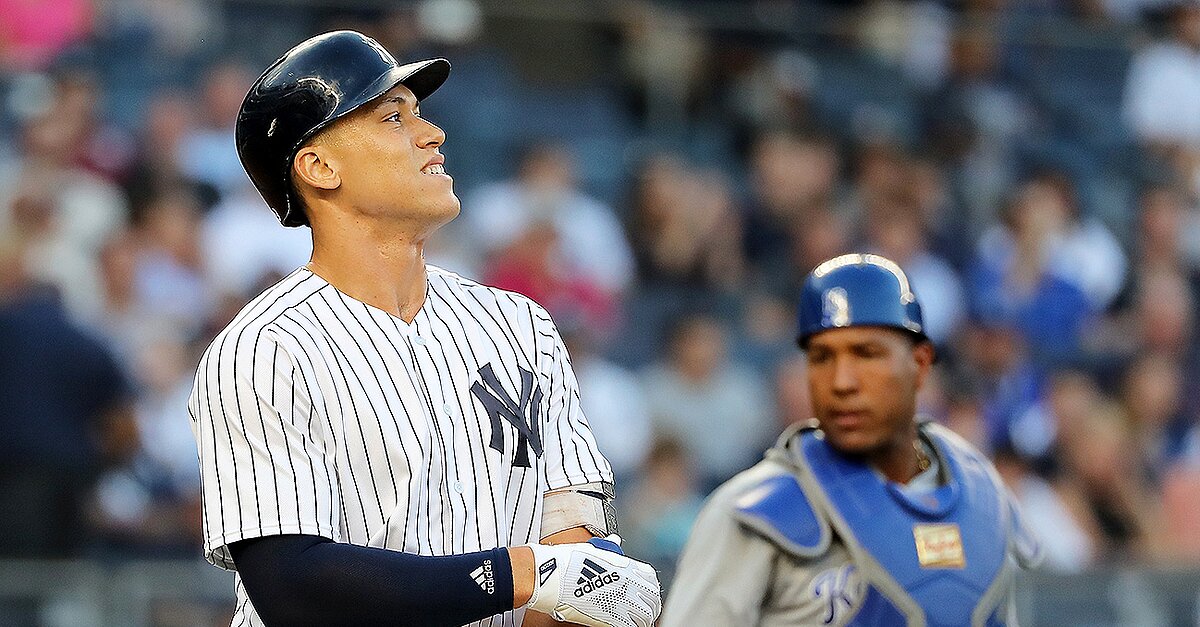 On Thursday in the Bronx, the Yankees introduced recent trade acquisition Zach Britton, announced a deal for J.A. Happ and beat the Royals, 7–2, to get within 4 1/2 games of the Red Sox in the AL East. But amid all that happy news, disaster: Aaron Judge went down after suffering a chip fracture in his right wrist against Kansas City.

The injury came after Judge was hit by a Jakob Junis fastball in the first inning. Because Judge is made of a combination of adamantium and mithril, the big rightfielder stayed in the game, scored on a sac fly that inning, then took another turn at-bat in the third, hitting an infield single. He was removed before his next trip to the plate, however, and postgame X-rays revealed the break in the ulnar styloid bone in his wrist. Judge won’t need surgery, but it’ll be three weeks before he can swing a bat, ruling him out for likely all of August.

You can expect that absence to stretch a little further as well. Phillies third baseman Maikel Franco suffered the same injury three years ago, on Aug. 11, 2015, and ended up missing close to two months of action, returning on Oct. 3—a loss of 42 games. On the brighter side, Lenny Dykstra broke that bone early in the 1992 season, on April 7, and was out only 17 days. Dykstra is completely insane, though, so maybe he’s not the best comparison.

Either way, Yankees fans can probably expect Judge back in the early part of September, assuming no complications during recovery. Wrist injuries are tricky, nasty things, and the hope is that this isn’t a Nomar Garciaparra-style issue that alters Judge’s career going forward. But even if all goes to plan, the Yankees will be without their star for a good long while.

That’s as a big loss as he is. The Yankees’ best position player and the runner-up for MVP honors last year, Judge was hitting a sparkling .285/.398/.548 with 26 homers, a 153 OPS+ and 5.4 Wins Above Replacement (Baseball-Reference edition). He’s first on the team in on-base percentage, slugging percentage, OPS+, and WAR—the last one by a sizable margin (Luis Severino is second at 4.5; the next best hitter is Aaron Hicks, down at 3.0). Simply put, he’s not a player you can replace.

So what can the Yankees do to make up for his loss? Here are three options for what to do next, ranging from the boring to the outright crazy.

If there’s any silver lining for the Yankees, it’s that they lost a player from a group that’s already full. While Judge is the regular rightfielder, New York’s other massive slugger, Giancarlo Stanton, easily takes his spot there. (Not a bad insurance policy to have.) Alongside Stanton are Hicks—having a terrific season at the plate at .245/.347/.472 and playing superlative defense in centerfield—and the venerable Brett Gardner, slashing a respectable .249/.338/.388, in left. A Stanton-Hicks-Gardner outfield should be more than fine going forward.

Judge’s injury also opens a hole at designated hitter, which he and Stanton usually occupy, but again, the deep Yankees have a ready-made answer to that issue in the form of Neil Walker. The veteran second baseman got off to a slow start this season but has turned it on in July, hitting .311/.407/.444 on the month. A combination of him and bench bats like Tyler Austin and Wade can hold the fort down there until Judge is back.

So the Yankees don’t need to do anything drastic. Then again, this isn’t an ideal solution. Gardner has been barely a league-average bat this season. Walker is injury-prone and lacking upside at age 32. Austin and Wade have floundered in their brief big league appearances. And if nothing else, Stanton is a definite downgrade defensively from Judge in right.

Also an issue is depth. Judge’s injury came the same day the Yankees dealt away versatile infielder Brandon Drury and Triple A outfielder Billy McKinney for Happ. Top prospect Clint Frazier would have gotten the call-up and a starting gig, but he’s on the disabled list with concussion symptoms. Jacoby Ellsbury, absent all season with unidentified injuries, has apparently fallen into the Springfield Mystery Spot. The Yankees have no bodies to call upon should anyone in that group struggle; another injury would be catastrophic.

The Yankees can survive with this arrangement, but they can—and perhaps should—aim higher.

2. Get a Cheap Veteran in a Trade

The other bit of luck in Judge’s injury is the timing, as there are still five days left before the trade deadline. That gives Brian Cashman ample time to find a replacement on the market if he so chooses. And if he does, he’d probably shop in the rental section, as Hicks, Judge and Stanton are under team control for next year, and Gardner has a $12.5 million team option.

With that in mind, who makes sense for New York? A righthanded hitter to partner with Gardner would be a good addition—say Angels backup (and former Yankee) Chris Young or Orioles veteran Adam Jones. Speaking of former Yankees, Cashman could ring up the Blue Jays again and ask what Curtis Granderson would cost. Other available hitters include Twins second baseman Brian Dozier, Royals third baseman Mike Moustakas, third baseman Eduardo Escobar or Rangers third baseman Adrian Beltre, to add to the infield/DH mix.

Of the veteran bats, though, one stands out as the best fit: Jose Bautista. The aging slugger has had a nice bounceback season with the Mets, hitting .235/.385/.436 with six homers and a 129 OPS+ in 187 plate appearances since joining the team in late May. A dreadful defender, he’d slide right into regular DH duties and provide some righthanded pop. The major issue, though, is that he plays in Queens. Given that Mets co-owner Jeff Wilpon’s idea of a perfect day involves a Yankees loss, it’s hard to see the team helping out its crosstown rival in its time of need.

Everyone in this group, though, is flawed or old (or both). The Yankees don’t need a star, but why not shoot for the moon if they can? That brings us to Option No. 3.

Hear me out, because it’s not as crazy as you think. Yes, the idea of the Nationals trading Harper in the middle of a pennant race sounds cuckoo, and the cost in prospects would be enormous. But there are reasons why this might actually be a realistic option.

To start, the Nationals are only nominally in the playoff chase. Entering play on Friday, Washington is 51–51, seven games back of Philadelphia in the NL East and 4 ½ games out of the second wild card, where it trails five teams. Since the start of June, the Nats have been one of baseball’s worst clubs, going 18–28. Fangraphs’ playoff odds give them just a 52.8% chance of making the postseason, and only a 34.8% shot at capturing the division. It’s gotten bad enough that ownership is pushing the front office to sell, according to The Athletic’s Ken Rosenthal, and the team has reached out to others to gauge interest in its free-agents-to-be, reports Yahoo Sports’ Jeff Passan.

For now, those discussions don’t include Harper, and it’s easy to understand why, as dealing him might cause a clubhouse and fan mutiny. But of all of Washington’s pieces, he’d bring back easily the best return, especially considering that if he walks this winter, the Nationals would get almost nothing back. Once free agency begins, Washington will make Harper a qualifying offer, which guarantees draft pick compensation if he signs with a new club. But because of the many qualifiers on said qualifying offer, the best the Nats can do if Harper leaves would be a pick after the fourth round in the 2019 draft. Any prospect acquired in exchange would be more valuable; to say nothing of what he’d bring back in a trade.

There’s also nothing that says that Harper is gone for good if the Nationals deal him. Trading him is a risk in that it could offend him, and it also gives the acquiring team time to woo him long-term. If Harper really wants to be in D.C., he’d understand this move as setting up Washington for a brighter future with him returning to lead the way. Even if he does take his ball and beard elsewhere, the Nationals still have a strong core, plus whatever they’ll have gotten for Harper.

As it stands, were the Nationals to make him available, there are few contenders who have the space and means to acquire him; Houston and Cleveland would probably be the likeliest. But the Yankees may be the match made in heaven. They have the outfield spot with Judge out and a fecund farm system pumping out prospects. And while Harper isn’t a perfect fit—he’s a mess defensively and hitting just .216 amid a long and brutal slump—he’s one of the few players alive who can match or exceed Judge’s production at the plate.

There are complications. The prospect cost would be heavy, equivalent to what the Dodgers gave up for Manny Machado. Payroll could be an issue, with the Yankees right below the luxury tax threshold and desperate to stay there. Finding lineup space for all of Judge, Harper and Stanton would be a problem once everyone’s healthy. (Then again, that’s a headache most managers would kill to have.)

But if the Yankees want to be, well, the Yankees, then this is the move to make. Just when every other team thinks your back is against the wall, you pull it down on top of them. Adding Harper would be a glorious, insane countermove. Is it likely? Absolutely not. But would it add some fuel and fun to this season? Absolutely yes.