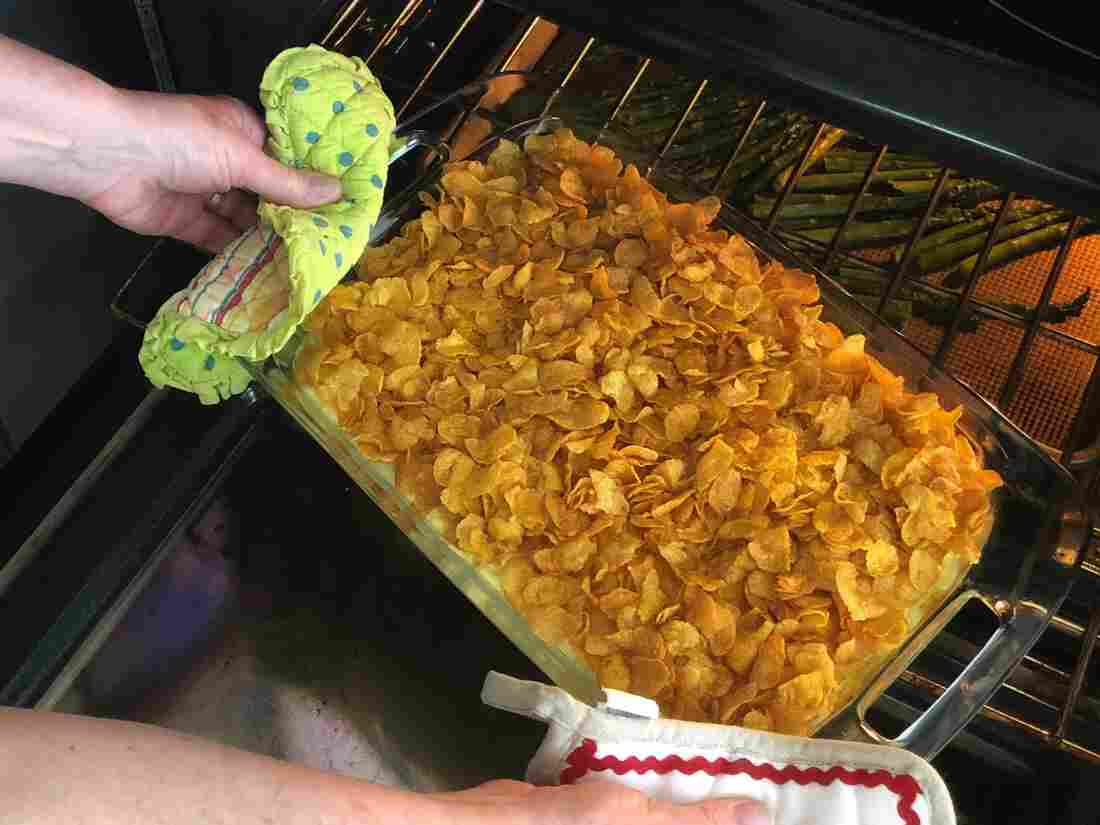 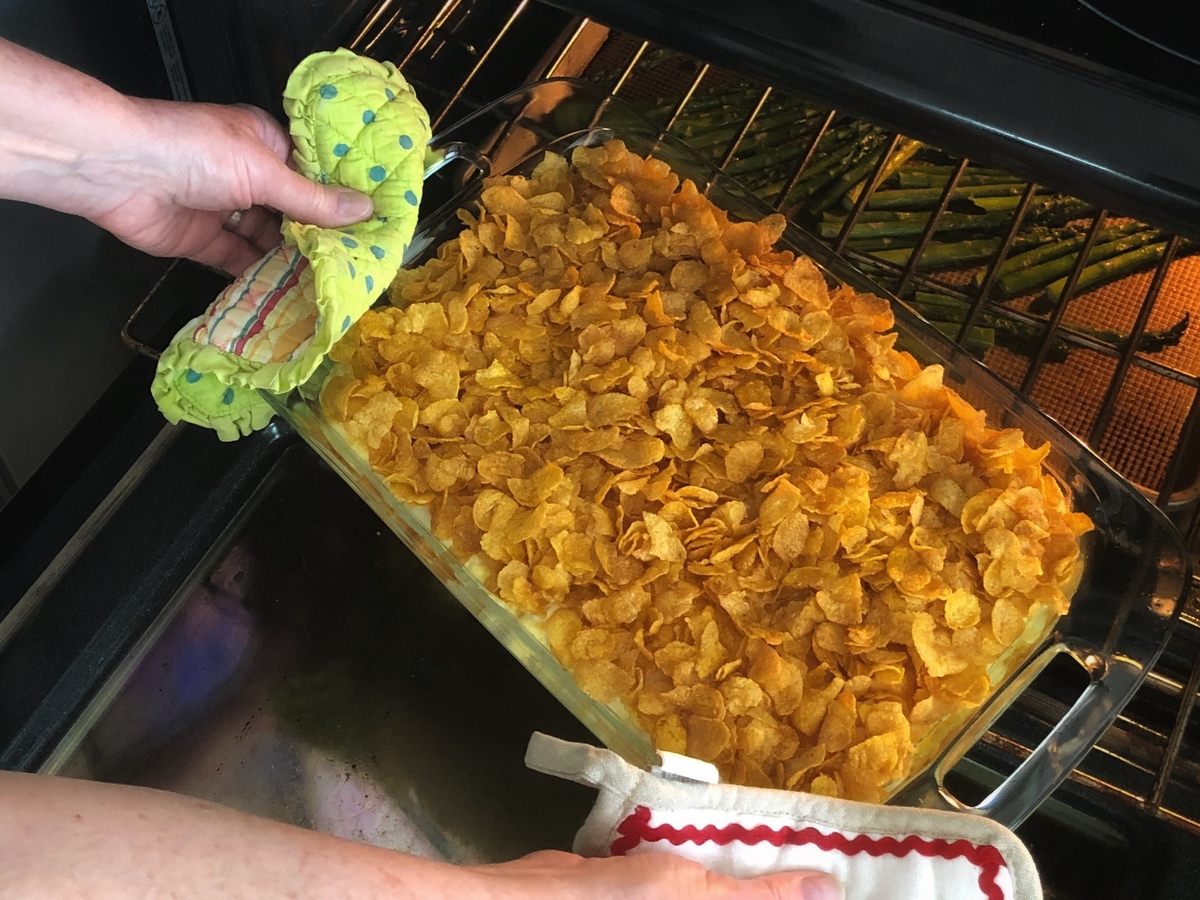 Carb-heavy comfort food is familiar to Mormons, here in the form of a popular dish called funeral potatoes.

A few weeks ago, Facebook users got an unexpected bit of morbid advertising when they were targeted with ads hawking “funeral potatoes” from a Utah company known as Augason Farms. Many of them immediately took to Twitter, wondering a.) what on Earth funeral potatoes were and b.) why on Earth they would want any.

Mormons were not confused. They were limbering up in the social media wings, ready to explain their most delectable food invention to the world. You see, Mormons like me grew up eating funeral potatoes — not just at funerals, but at potlucks, Thanksgiving, and Sunday dinner. They are a combination of cubed potatoes, cream of chicken soup, cheese, and — the coup de grâce — a topping of butter-crisp Corn Flakes. This comfort food has pride of place next to other Mormon classics like cream cheese Jell-O, all manner of ice cream, and “dirty soda” — a virgin drink spiked with flavored syrup.

Funeral potatoes were memorialized as a collector pin during the 2002 Winter Olympics, held in Salt Lake. And just last year, a local food truck called Cook of Mormon started dispensing the indulgent dish around Salt Lake with a dash of Mormon nice. According to Jesse Ward — the erstwhile owner of the establishment, who doled out food dressed as a Latter Day Saint missionary — the lines were long. 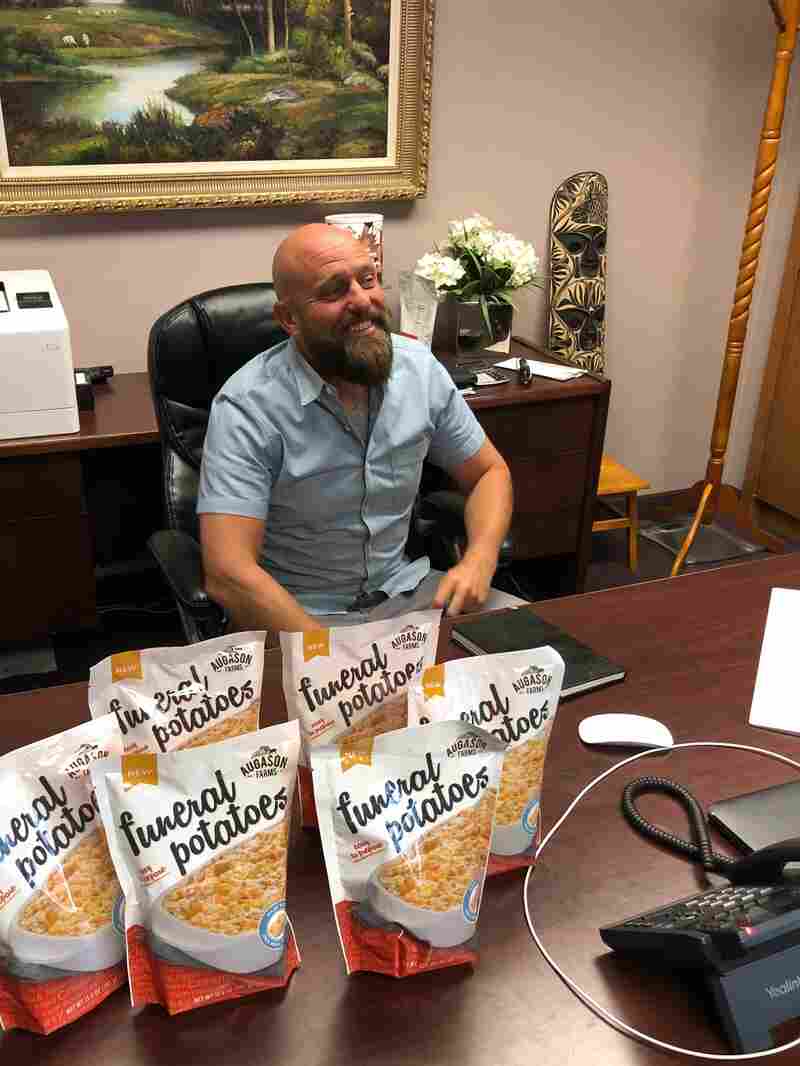 Mark Augason of Augason Farms says it doesn’t hurt to be prepared. He has 16 years of food for 12 people, plus 2,500 gallons of water stored in his Heber City, Utah garage. Lauren Sanders hide caption 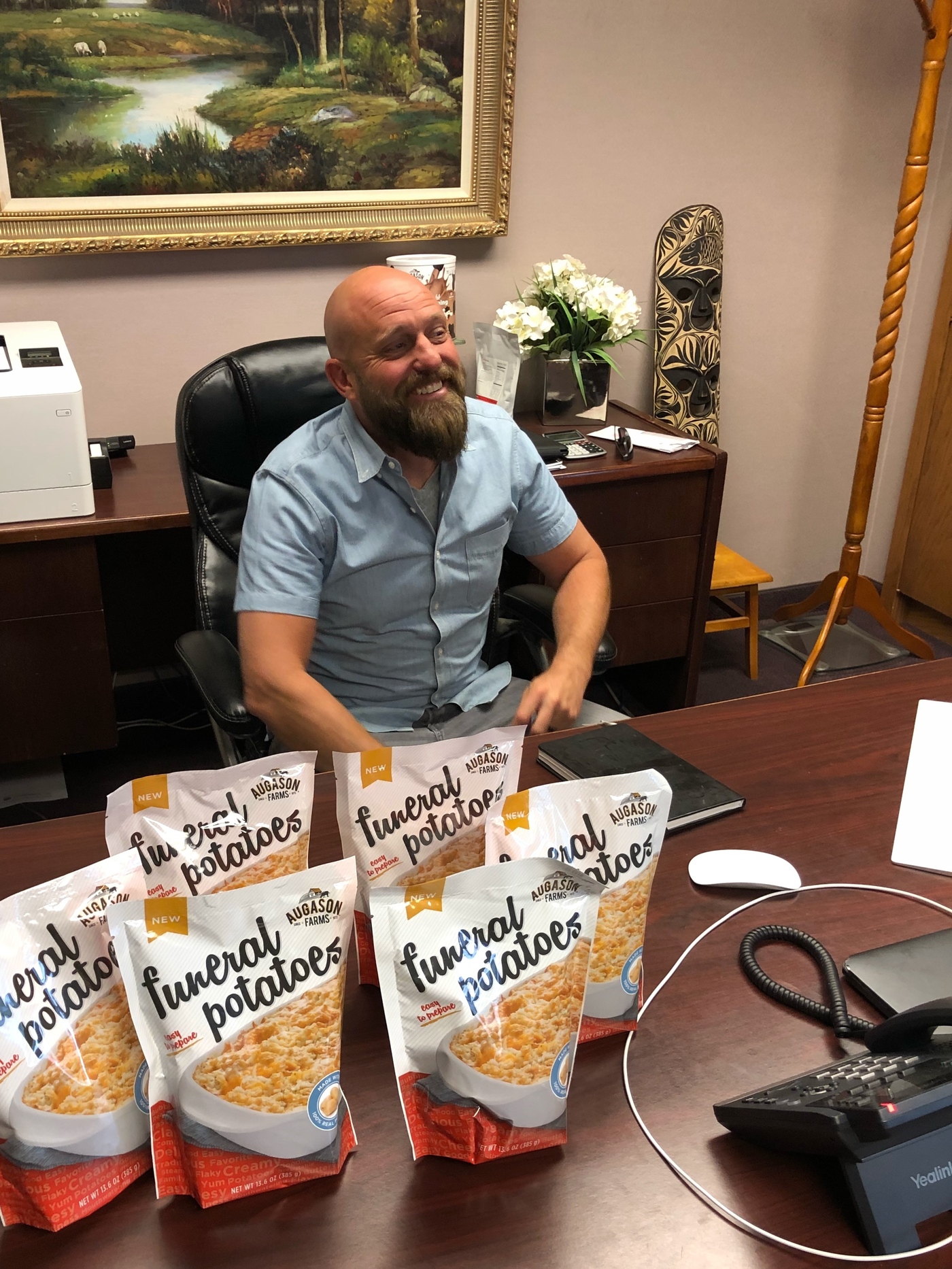 Mark Augason of Augason Farms says it doesn’t hurt to be prepared. He has 16 years of food for 12 people, plus 2,500 gallons of water stored in his Heber City, Utah garage.

Mormons, so the logic goes, are particularly obsessed with fatty, sugary foods because all other vices have been taken from them. The religion prohibits drinking or smoking, so they reserve their human frailty for carbohydrates.

Or it could be that the cuisine is an extension of Mormons’ devotion to 1950s values. Religious scholar Armand Mauss argues that around mid-century, Mormons turned from being a “peculiar people” (a phrase that harkens back to a time when the LDS Church was at war with the U.S. government, Utah was a communitarian theocracy, and the faithful practiced polygamy) toward assimilation.

Mormons wanted to become models of the mid-century mainstream. Their cuisine went from wholesome farm food to the processed, Crocker-esque diet many middle-class Americans were turning to at that time. Once a people who made everything from scratch, they became a people who put ready-made foods into other ready-made foods: canned soup on instant rice, Sprite in sherbet, and, of course, Corn Flakes on potatoes.

According to Jacqueline Thursby, a retired folklore professor at the Church-owned Brigham Young University, this new approach paired perfectly with the demands of the new Mormon housewife life, where big families and bigger congregations required food that could be made quickly, stored easily, and taste good to everyone. It was even more perfect for the Relief Society, the Mormon female auxiliary organization involved in ministering to the sick, poor and otherwise afflicted, who needed quick meals for the endless births, weddings, and deaths they attended. Funeral potatoes became a staple — an essential fast food for hard times.

But as much as Mormon food practices have shifted since the pioneer days, there’s still an emphasis on that most frontier of values: self-reliance. Mormons leaders still instruct the faithful to maintain pantries full of preserved produce, as well as a three-month supply of food, drink, and other items that the Church calls “emergency preparedness.” Members recognize those items as the supplies they will need to weather the chaos that will precede the Second Coming of Jesus.

This has created a burgeoning “doom boom” industry in Mormon states like Utah, where many of the nation’s top food storage companies are located.

It’s precisely this blend of pioneer self-reliance and 50s comfort cooking that inspired Utah-based Augason Farms, a family-run company calling itself a “pioneer in the survival food business,” to create their emergency pouches of funeral potatoes featured in its Facebook ads. Their motto? Potatoes to die for.

Mark Augason, the head of the company, says he was just trying to have some fun. But his customers were shocked. “They were saying, ‘Why would you call it that, what does it mean?’ Some people were offended. Some people were intrigued. But most people made jokes about it.”

Augason likes to keep a sense of humor about things. The son of a food inventor, he says he’s always looking for the next big thing. This impulse dates back to his childhood, where every Wednesday his siblings gathered for Invention Day, battling it out to create the next big food sensation from items in their fridge.

As Augason got older, he kept up the rivalry tradition, challenging his wife’s aunt to an annual funeral potato bake-off. His twist? Frozen hash browns instead of cubed potatoes, two kinds of creamy soup, and Lays potato chips sprinkled on top. So when Augason pushed himself to create a new food storage product that was creative and went beyond the staples, it was no big stretch to come up with a just-add-water twist on a family classic.

And Augason says disaster preparation is not exclusive to Mormons. He estimates that only ten percent of his current customers are Mormon, the rest range from hard-core preppers to religious folks to everyday people worried about natural disasters.

Still, Augason thinks preparing should also consider satisfaction — like the familiarity of a cheesy dish of potatoes around a kitchen table, inside a bunker or out. Funeral potatoes are not just for a loved one’s funeral, but could be for the ultimate funeral: the end of the world.