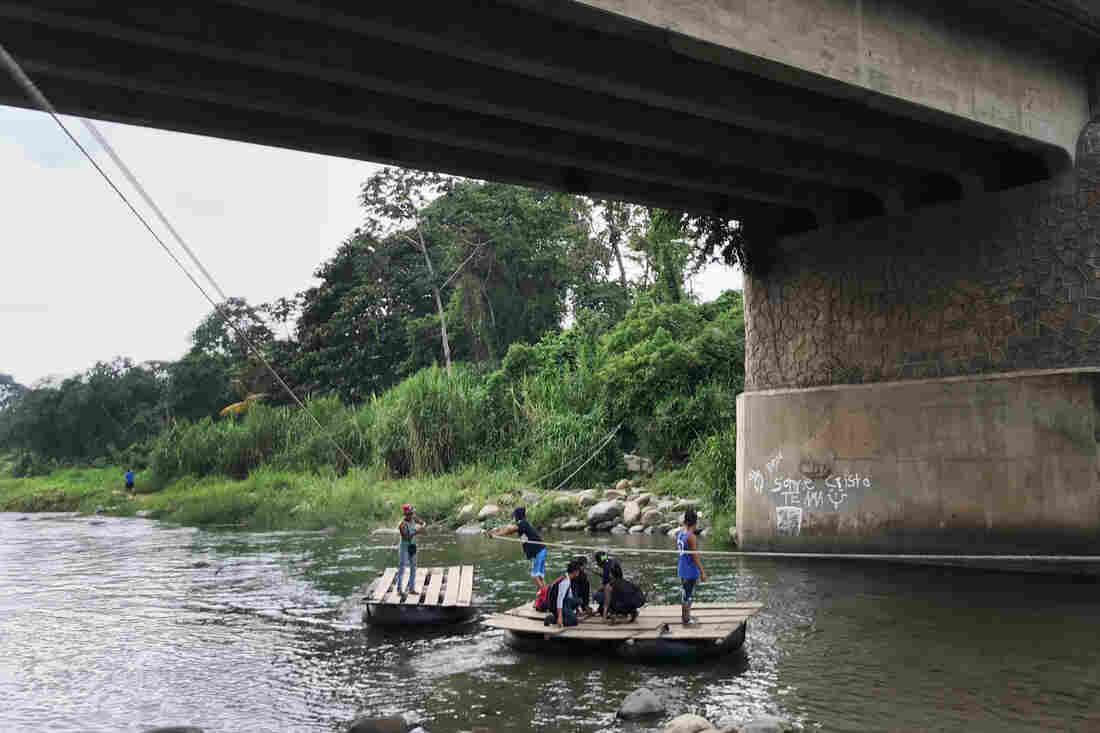 Migrants and day laborers cross the Suchiate River, which divides Mexico and Guatemala. The crossing happens despite immigration officials working on the bridge above. James Frederick for NPR hide caption

On the Suchiate River dividing Mexico and Guatemala, it sure looks easy to cross north without papers.

A young, mustached man is pulling a makeshift raft across the quiet river via two ropes connecting the countries. The crossing costs 4 quetzales, 10 pesos or 50 U.S. cents. The raft captain says that nearby migration officials rarely intervene.

But the impression that Mexico is lax on migrants disappears as you head just a little north.

“They put up lots of checkpoints,” says Gustavo Rivera, a bus driver shuttling between Mexico’s southeastern border and the nearest city, Tapachula. “Immigration [agents], federal police, soldiers, local police. I don’t get many migrants on the bus anymore because of the checkpoints.”

President Trump singled out a group of families from Guatemala, Honduras and El Salvador heading to the United States as evidence that “Mexico is doing very little, if not nothing,” to stop immigration. But Mexico has actually assembled an aggressive enforcement strategy, with U.S. backing.

The strategy tightened up in 2014, shortly after American officials declared a crisis over the arrival of large numbers of Central American children at the U.S. border. The U.S. began funding Mexico’s immigration crackdown with the Southern Border Plan.

Rather than amassing troops on its border with Guatemala, Mexico stations migration agents, local and federal police, soldiers and marines to create a kind of containment zone in Chiapas state. With roving checkpoints and raids, Mexican migration agents have formed a formidable deportation force. Since the Southern Border Plan launched, Mexico has deported more than half a million Central Americans, according to data from Mexico’s Interior Department. Every year since 2015, Mexico has deported more Central Americans than U.S. authorities have, sometimes more than double.

It’s such an effective force that even some government officials try to give migrants workarounds.

“We often tell migrants to travel at night,” says Ana Carolina Rodas, who runs the state government’s local migration assistance office in Ciudad Hidalgo, the small town that abuts the Guatemala border. “There are fewer migration officials or checkpoints at night, so it’s less likely they’ll be detained and deported.”

In recent years, nearly half of migrants detained in Mexico don’t make it past southernmost Chiapas state.

On a baking Tuesday afternoon in Tapachula, the largest city on Mexico’s southern border, dozens of Hondurans, Guatemalans, Salvadorans and Nicaraguans crowd into the shade of trees outside the Belén shelter. Its front yard has become the main hangout for migrants in the city.

“Everyone, especially women and children, hangs out here all day,” says Ricky, an asylum-seeker from El Salvador. Everyone outside the shelter asked NPR to only publish their first names for fear of being located by gangs and authorities after fleeing violence or threats in their home country. “We feel safe here because if anything were to happen, we’d all support each other.” 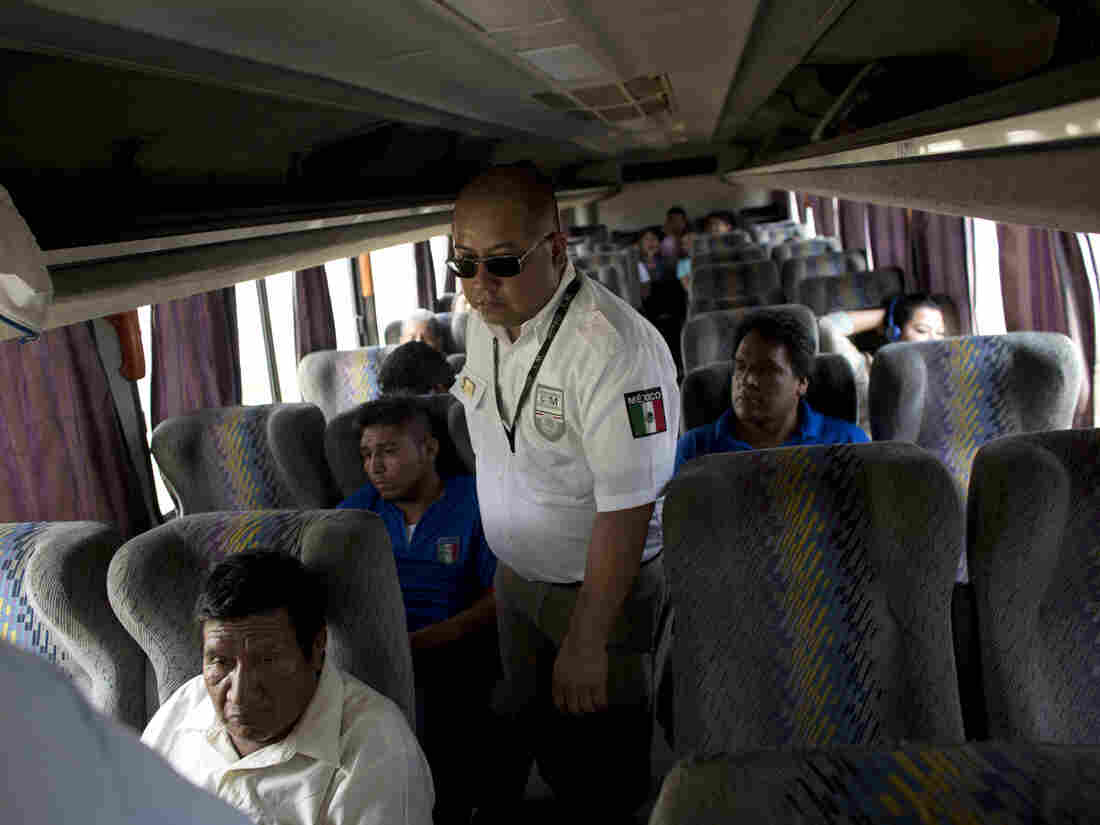 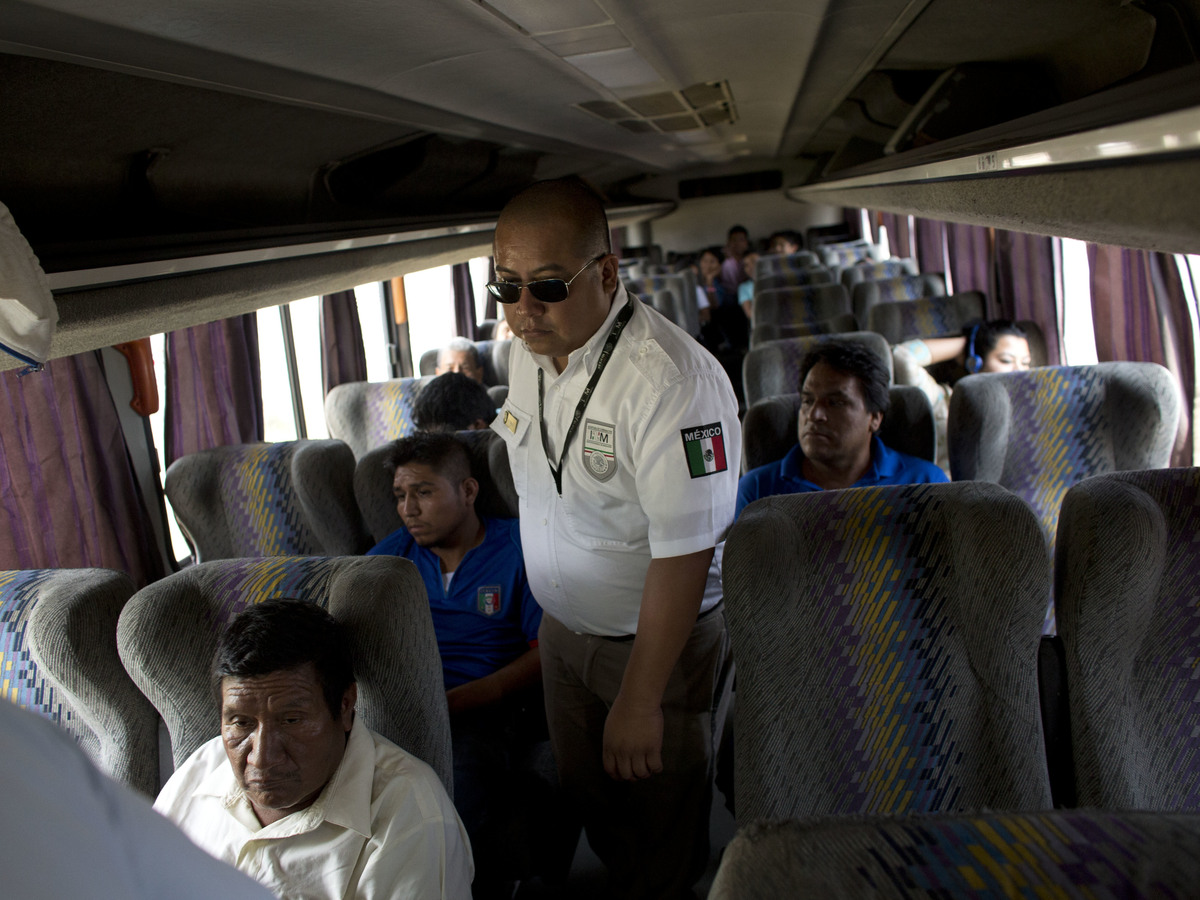 Migrants used to roam all over Tapachula. They’d rest under the central park’s pavilion during the day, enjoying the free entertainment of street performers. They’d pack an adjacent street where restaurants cater to the tastes of Salvadorans, Hondurans and Cubans. At night, migrants who couldn’t afford or find a bed tucked themselves away under the park’s concrete benches. No more.

“I’ve been sleeping here on the sidewalk outside the shelter for almost a month,” says Ricky, who used up the limit that the shelter would allow him to stay there. “But it’s better than wandering through the city, where you’ll get picked up and deported.”

“We have become a target”

Beti rests against a tree with her 4-year-old son. The two left Honduras in March and are requesting asylum in Mexico. They don’t feel particularly welcome.

“We [migrants and refugees] have become a target for everyone here,” she says. “We feel like we have no rights and all security forces are after us.”

“We are going to be reinforcing [border] security with more gendarmerie [military police] troops that the Interior Ministry will be sending us,” said Chiapas state Gov. Manuel Velasco in a Facebook video.

Officials have not stated how many additional troops they’re sending nor how many troops are already operating here. Immigration, police and Interior Department officials did not respond to NPR’s interview requests.

Priest César Cañaveral, who heads migrant outreach for the Catholic Church’s local diocese, is blunt about the way Mexico is treating migrants.

“Today the Mexican government is hunting migrants without sympathy, even though the exact same thing is happening to Mexicans at the U.S. border,” he says. “The border security measures here in Chiapas are even harsher than on the U.S.-Mexico border.”

Mexico’s speedy deportations have raised concerns of advocacy groups like the Washington Office on Latin America that potential refugees are being sent home before they have chances to claim asylum or report crimes committed against them in Mexico.

Ramón Verdugo, who runs a refugee shelter called Todo Por Ellos (all for them) in Tapachula, claims the authorities are going beyond straightforward migration enforcement.

Verdugo says Tapachula’s city police have a method of stopping suspected migrants or asylum-seekers and demanding payment to be let free. Otherwise — and sometimes despite payment — they are delivered to immigration authorities.

Alexander Hernández, 19, is a witness in a human rights complaint filed by Verdugo against the Tapachula police. Hernández came because he says gangs would have murdered him by now if he hadn’t fled his native El Salvador.

One night, he and some friends were walking back to the shelter from Tapachula’s central park. Local police stopped them with weapons drawn and threw them up against a wall. Hernández and his companions are all asylum-seekers and insisted they had the paperwork to be in the country legally. They showed the police.

Hernández and his friends were sent to a local immigration detention center but were released soon after they were able to speak to Verdugo at the shelter. One of Hernández’s friends was taken to the city jail and extorted for all the money he had on him, says the complaint.

Local police did not respond to NPR’s questions about the incident.

“The migration reinforcement is making the human rights situation worse,” says Verdugo. “When you push migrants more into the shadows, they’re at the whims of corrupt authorities, organized crime and they don’t report crimes because they’re afraid that if they try to, they’ll just be deported.”

Far from being at odds, Cañaveral, the priest, sees parallels between Mexican and U.S. migration strategies.

“We’re putting up something worse than a wall, it’s an invisible wall but it exists,” he says. “The policies are made as if migrants are invading us, that they bring violence and crime. Instead of being welcoming, we’re being discriminatory.”